I sold my car to buy an iPad

I know, it sounds crazy. But let me explain…

June 2004 I moved to Utah to go to the school of my dreams. Without family. With hardly any money, and car-less.

“You don’t need a car in college,” my parents told me. So they kept the car I knew as mine (and paid for) during high school.

It was true. I didn’t really need a car. I lived on campus that summer. One of my roommates had a car, and I got a bus pass to take occasional trips to the mall.

A few weeks in to my new Utah experience I met a guy, and said guy had a car. Score! It wasn’t fancy… At all. It was a 1992 Honda Accord, but it drove, and that’s all one needed. 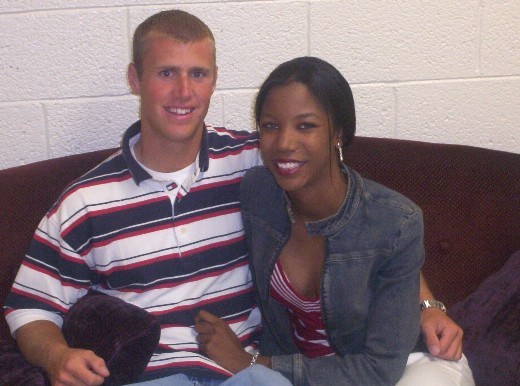 A few dates in this guy became my boyfriend, and things got serious pretty fast. That was the good news. The bad news was he was about to move three-and-a-half hours away to go to another college, where he had a golf scholarship. How in the world would we see each other?

I needed a car.

But I had no money. No job, just student loans. So he lent me $500… It was a down payment for a car, which he helped me pick out. He didn’t co-sign though (probably smart).

I wanted something sporty and snazzy, but he said something practical and inexpensive was smarter.

Now I had to marry him.

I paid off the car in less than a year, and we (mostly he) drove that thing into the ground. During the second year the air conditioning went out. I remember going out to lunch in the St. George heat with a co-worker, who purposely turned my broken A/C on (which blew hot air) to see if it could possibly get even hotter. 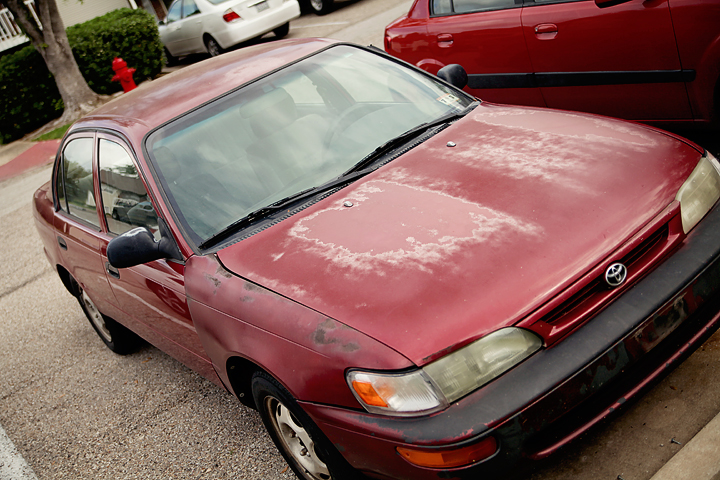 I ran into the back of a car once, and a metal pole twice–constantly knocking off the same pesty headlight, and bending the hood. The front bumper to this day has a zip tie holding it to the rest of the car.

In 2006 we traded our ’92 Accord for a ’04. We were finally moving up. But we kept pushing our little faithful Corolla to stay with us. And she did.

Side by side there was no question, our new Honda was worlds better, smoother, and much more appealing than our Corolla. Which is why we are still confused as to why someone decided to bust into Old Faithful, and rip her radio out. Really? Do people still do this? Apparently so. 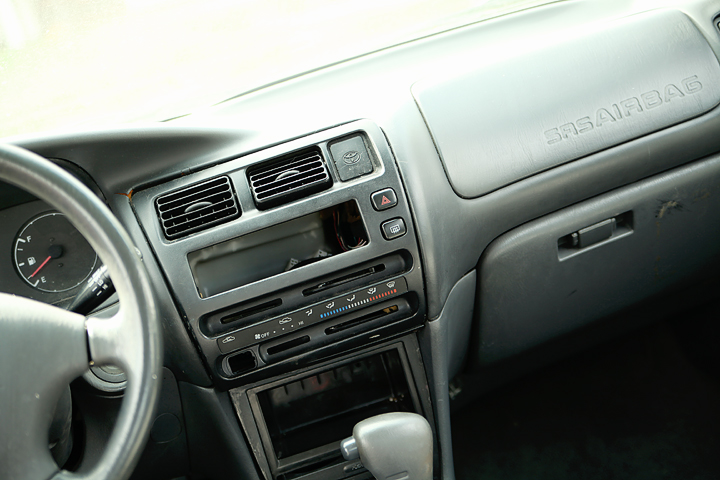 But she kept going.

Eventually her paint started to show her age, and her pieces started falling apart. Particularly her inside door handle. We could only get out by rolling down the window. 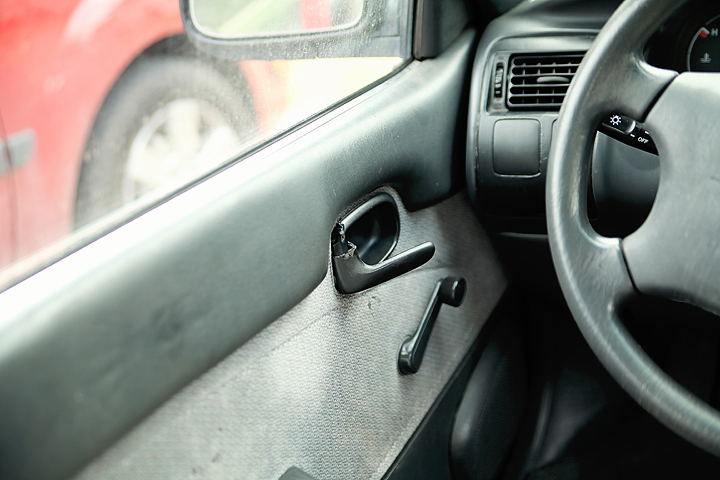 Finally, after more than seven years of marriage, an opportunity presented itself and it was time for an upgrade. Corolla for Corolla we moved up to a 2007, and bought Old Faithful’s younger brother named Buzz Lightyear (By my husband’s sister. This car has a whole ‘nother back story that I’ll have to let her tell sometime.) 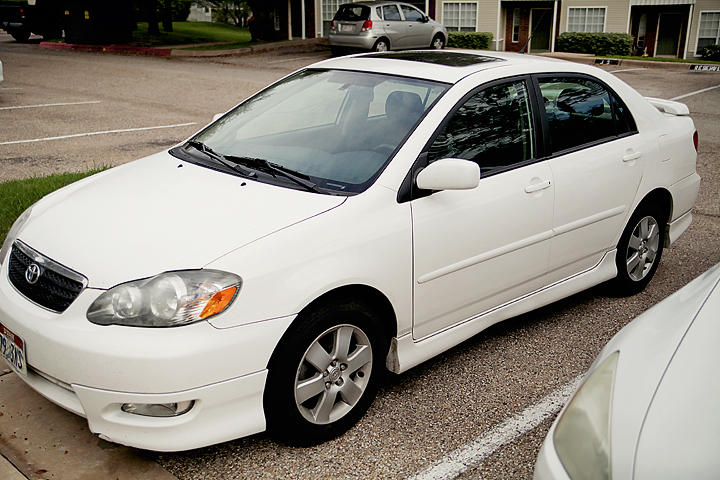 For a few weeks we had three cars. But who needs three cars? Actually we did one day when Buzz’ battery died and Old Faithful lived up to her name once again.

Finally, we decided it was time for her to go to a better home.

Given all of her per-existing conditions we decided it would be best to list her for $900 on Craigslist. The response was overwhelming. Within minutes we had a dozen emails. Many from men named “Jose”. My husband went down the list and the first person to answer came to get her for $900. I thought she was worth at least $1000 because she runs great, but good karma is never a bad thing.

I knew all along I wanted to use the proceeds for an iPad. It was a part of our deal–My husband and I. And my reward for surviving his academy the last 8 months.

I didn’t get the new one. The savings matter more to me than having the latest and greatest fad. I got a 32gb iPad 2, refurbished, and saved $200.

What are we doing with the other half of the money? My husband wants a gun.

Trading our car for an iPad and a gun, now that’s a true American family for ya.

Seven years, half a dozen road trips, five moves, and one voyage across the country later, she’s moved on to another family who will hopefully fix her up, and not sell her for parts. For me, I’ll always remember Old Faithful, and every time I pick up my iPad I’ll think of her. Let’s hope her spirit was reincarnated into my new shiny toy, and that she proves to be just as loyal.

very cute story!! Don’t you think you look like a baby when you look back at old pictures of yourselves? I’m always amazed at just how young we looked!! My Old Faithful was a 1981 Corolla. loved that little car!! Corolla’s are apparently awesome! Though now we have an Accord & a CR-V and I do love driving my standard.

Over from Mormon Moms. We always named our cars growing up and had an ‘Old Faithful’, too. He (they also had genders) was an old 60 something Ford Falcon. Loved that car. I was sad when my dad sold it, years after I got married. He went to a better place though. The new owner rehabilitated him and he looks better than ever.

I had an 88 Corolla I bought in 98 during college. Loved it and drove it as long as I could! I loved this story made me smile. 🙂

🙁 This makes me wish I had taken pictures of our old faithful before we sold her! 🙁

LOL I had a car like that all through high school and up n til last may when we got us a 2008 Ford fusion and we love it…….only thing with my old car is it always choose to die in the intersection on a weekly basis….lol

So cool! Now I’m looking around for what I can sell for an iPad. I want one so bad before BlogHer and Blogalicious! Thanks for the inspiration =)

That’s awesome! I had a ’92 Camry in high school. Those Toyotas are good forever. This really cracked me up, though. Definitely sharing with my husband!

I should add, for the benefit of other readers (since we went to HS together) that I purchased said ’92 Camry in 2003.

I loved reading this! Hope Old Faithful is with a family that will appreciate her 🙂

This is a great story!!! hahahaha…love it.

$900 for that Toyota i don’t know but it sounds very cheep. Beside the car looks very nice. body kit is also done very well. plus i can’t see any scratches on the body. So the person who bought the car is very lucky.

Awww. We sold our 1998 isuzu amigo for I think $200 and went on vacation. Old faithful…he, because he was blue, was our old faithful. Power steering went out but he help on…he was a CHAMP.
I LOVE that you had her when you and hubby were still dating!

I am now not sure where you are getting your information, however great topic. I needs to spend some time studying much more or figuring out more. Thank you for magnificent information I used to be in search of this info for my mission.