Zombie apocalypse: He says/ She says

After hearing people go on an on about Walking Dead, I thought maybe I’d give the show a try. A friend played the first couple episodes for me and it was interesting enough, so I decided to keep watching on my own. 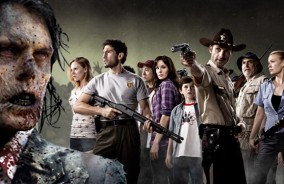 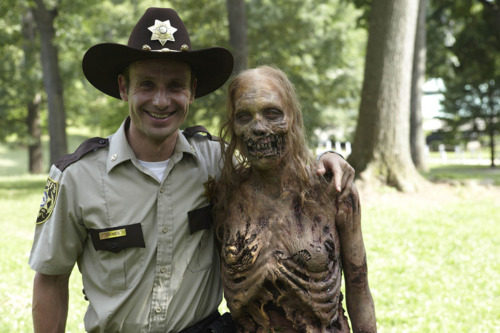 Here’s the thing about me and scary movies/shows… I CAN’T TAKE THEM. They freak me out. Big time. I watch half the episodes on mute with subtitles. And I can’t shut off the images when I go to bed. I even got creeped out searching for a photo for this post, so I chose this happy zombie photo to remind me they are just actors.

My husband refuses to watch it with me, but I begged him to at least sit on the couch with me while I watched it and he studied.

I’ve only watched up to the first episode of the second season but the show has really given us some interesting things to discuss.

She says: “Wouldn’t it be really sad if our daughter turned into a zombie?”
He says: “Uh, yes…”
She says: “That would be so sad. I would be devastated!”

She says: “Would you rather have a normal apocalypse with natural disasters and stuff or a zombie apocalypse?”
He says: “I don’t know. Probably a zombie apocalypse so that I can at least blow up some zombies before I die.”
She says: “Not me, I don’t want to get eaten alive. I’d much rather die in an earthquake or something.”

She says: “Would you shoot me in the head if I turned into a zombie?”
He says: “No. I’d probably shoot you in the body or somewhere, but not in the head.”
She says: “NO! You HAVE to, or else I wouldn’t die. A zombie needs to be brain trauma.”

Oh God! I want to watch the show so badly. But I’m a big fat scaredy cat. I watched 2 episodes of the first season and wasn’t able to sleep for days. I’m so scared of zoombies! But the shows were so good and everyone is talking about this new season. What’s a girl to do?

HAHAHAHA!
I’m with you: I like my apocalypses to be normal.
And I refuse to watch WD (hub is a huge fan) for the same reasons you listed.

the Walking Dead is one of our favorite shows! Every Sunday night, my 12, 14, and 16 yr. olds pile on the bed with me to watch it. I guess it’s kinda strange to have a family bonding night over Zombie tv but we love it, LOL!

I wish we could watch it like that too but my husband is like “I’m not into zombie shows” like I am?! It’s just interesting to watch! I can’t watch it the next few nights though cause he’ll be working and I’ll be home alone. haha.

I LOVE The Walking Dead! I’ve always loved scary movies…classic scary movies not all the new ones.

I loooooooove me some TWD! It’s my favorite show, and I’ve read all the issues of the graphic novel. I’d never last during a zombie apocalypse, though. I’d literally be scared to death. I’d crap myself and that would be the end!

I definitely would too! It’s not my favorite show yet. I like Once Upon a Time and Glee. This isn’t my typical show, but it’s facinating so I am interested. I’m just scared of the gore!

Girl. IF you only knew of my obsession with The Walking Dead! I have the comics, the graphic novels.. first season on DVD AND I keep up with the show religiously every Sunday. Keep watching. It’s not that scary anymore now that it’s in it’s 3rd season. It’s became quite the drama show!!

You MUST be shot in the head! LOL! We watch very little TV, but we love TWD too, and I’m not much into scary shows either. The 2nd season shoulda been renamed “The Talking Dead” but like Natalie said keep watching. This current season is SO good! I’m almost tempted to read the comic book/graphic novel.

What you wrote was actually very logical. But, think about this, suppose you wrote a catchier title? I mean, I don’t want to tell you how to run your website, however what if you added a title to maybe get folk’s attention? I mean %BLOG_TITLE% is a little vanilla. You could look at Yahoo’s front page and watch how they create post headlines to grab people to open the links. You might add a related video or a related pic or two to get readers interested about what you’ve got to say. In my opinion, it might bring your posts a little livelier.|

I only watch the talking non scary parts of “The Walking Dead” in regular mode. If there is going to be a zombie fight I watch in fast forward. Afterwards I go to the main page of IMDB website and read the plot summary for any details I missed.

I watched the Walking Dead once. Ew. I would much rather have a natural disaster apocalypse.

I love the walking dead! Although, I don’t think the world will end with a zombie apocalypse. My partner and I have conversations like this too when we watch it, reading this makes me feel a bit more normal.

Have you ever thought about adding a little bit more than just
your articles? I mean, what you say is important and everything.
However think about if you added some great pictures or videos to give your posts
more, “pop”! Your content is excellent but with pics and video
clips, this site could undeniably be one of the very best
in its niche. Wonderful blog!

Just to let you know your blog looks a little bit strange in Safari on my laptop with Linux .

Ahaa, its fastidious conversation regarding this piece of writing at this place at
this web site, I have read all that, so at this time me also commenting here.

It truly is mostly extremely difficult to see well-advised parties on this theme, still you look like you realize what you’re covering! Gratitude