I walked through the doors of the gymnasium and was amazed by the length of the line. I could guess there were at least 80 people in front of me. My husband watched our daughter while I stood in line, and debated walking back out to the car.

I saw people of all ages and races in line with me. Parents waited with their restless children who played tag around the rec center.

Friends stood in line together and took turns watching each other’s children while they took part in their civil duty.

I thought what a great example this was setting for their children. I don’t remember my parents voting when I was younger. Maybe they did but we didn’t talk about it. I surely don’t remember waiting in line with them. My husband had voted earlier that day and I had waited until the very last moment on election day, to vote.

Ten minutes went by. Then 20, and 30, and I was about half way through the line.

Polls closed at 7 but everyone in line before then was allowed to cast their vote.

I stood debating back and forth in my head if I should just leave. What would my one vote mean in the grand scheme of things. But then I thought of my daughter.

I care about her education, her health, her future, and people we vote for can influence what those things will look like for her some day.

And while I waited my mind drifted to history lessons where I learned of a time where blacks and women weren’t allowed to vote.

An hour after walking to the back of the line I was handing over my voter registration card and handed my bright orange clearance card. I got my pass code and took my turn to cast my vote. 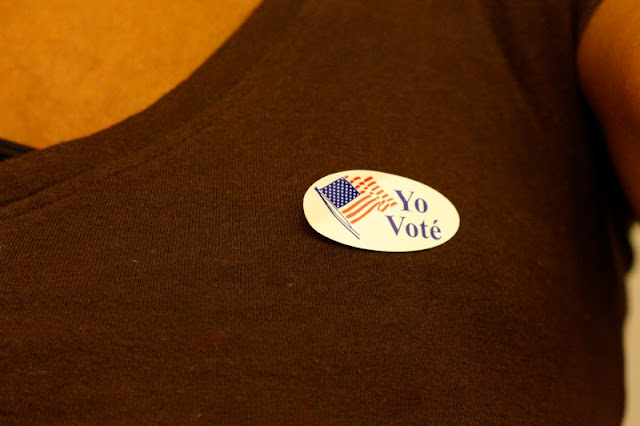 And when the job was done I proudly wore my “I Voted” sticker… Or in this case, they ran out so I wore “Yo Vote´”!

Voting didn’t take half as long as the waiting did, but it was worth it.

i;m so glad u voted! i did and always have since the moment i turned 18, as a Black woman too many ppl fought and died for my right to vote. Do you and your husband have different political ideas?

When I was young(er, missed voting this November by a month 🙁 ) my mom would usually take me with her to vote. And I was always really interested in the process, and wanted to go in the booth with her. It seemed so awesome to be able to vote, and it still does. I can’t wait to be able to vote, and select who I want representing me 🙂

Good for you for voting! So many people are too lazy to do it, especially when it’s not a presidential election.

That is always why I make such a point to vote. It’s unbelievable to me how many people our age (early 20s) don’t vote. Um! Hello! Get out there. I’m proud of you 🙂

Good for you for sticking it out!!! Yo Vote is hilarious…I love it.

as long as the wait can be, if we don’t voice our opion by voting, we can’t complain about who’s in power or what’s going on if we didn’t make our choice and voice heard. I think that’s the most frustrating thing about hearing others complain about these things. If you didn’t vote, shut your mouth. I’m glad you stuck it out, now you can complain all you want! lol.

you poor thing! I have two words for you: absentee ballot. your vote counts and you don’t have to stand in line for so long!

good work gettting out there and voting!

Good for you! I voted also, though in the early election because I didn’t want to be faced with waiting in line. I think it’s such an important example to set 🙂

I am so glad you voted.

I think it’s awesome that you are making the effort to make sure your daughter (and any other future kiddos) know how important it is to vote! I remember times when my parents would wake up at 5:00 in the morning so that they could be first in line at the polling site to vote before work and the kids had to get ready for school. When I turned 18, I was excited to vote in my first presidential election, and it was so awesome that my friends at college thought it was just as important as I did. People give a lot of flak for those in our generation, but I really believe that there are so many of us who aren’t recognized for taking voting seriously, and for doing what we can to make our world a better place, one person (and vote) at a time.

I should add that is the first election that I have not voted in. I will say that the process for absentee voting when you’re temporarily living overseas is very confusing, (and now I have so much more admiration for people who do their civic duty while abroad) but nonetheless, I was disappointed not to have voted this year.

Kudos for not leaving. I’ve seen people come in and turn around because they didn’t want to wait in long lines to cast their votes. And then months later, I heard some of those same people complaining about laws that had been passed. In the back of my mind I’m thinking “If you would have voted maybe, we would have had the right person in office.” Whether we believe it are not every vote does count and one vote can truly make a major difference.

I remember my parents voting because my mom always talked to us about how excited my grandparents and great grandparents were when they finally got the chance to vote. They made sure that she knew it was important to vote. We don’t get much say over things in our lives but when we do have a say we should speak up and let our voices be heard!! I’m thankful for my mom taking us with her when she voted.