Yes I’m Pregnant, No I’m Not Changing the Name of My Blog Back

As I prepared to sit down and write this post a certain gif kept coming to mind.

It’s not an accurate depiction of my life. Nothing is burning down. We aren’t falling apart. But it’s how I’ve been feeling inside.

So yea. I’m pregnant. And though I’ve done this twice already I feel like it’s the first time I’m utterly terrified.

My husband is trying to play this off like “Yea, we planned this,” but I’m like dude, ain’t nobody gonna buy that. I closed up shop so hard I renamed my entire brand.

I was done. And finally ok with that. I mean, not just ok, I’m talking vacations booked, retirement planned, all evidence that babies ever lived here GONE, totally ok.

I’m debating how far into the details I want to get as far as the miraculousness of this pregnancy but some of it is sad and actually quite traumatizing so I may save it for another post. I will say at one point a fetal nickname I was considering was Lucky but ultimately when the dust settled, Sneaky fit the best.

One of the hardest parts of these last few months was not saying anything on my blog. The last two pregnancies I was spewing the news before the pee even dried on the stick. This time has just been… more complicated.

But keeping something that was such a huge part of my life all bottled up when I’m used to word vomiting all over this joint was just weird.

Of course I still had sponsor obligations (A LOT of those. Thank you so so much for bearing with me it was all I had energy to write). And I still shared very real parts of my life. But I felt like that gif…

So. Here we are all out in the open. The first trimester essentially behind me. This kid is already missing a whole freakin chapter of its baby book but I guess that’s what you get when you catch me by surprise.

So in answer to some of your questions. Yes, I’ll be blogging about the pregnancy though I don’t know how much. I mean, I’m not turning this into a pregnancy blog but I’d like to do some kind of weekly update if I can keep up and share this part of my life.

No, I’m not changing the name of my blog back to Baby Making Machine. The machine has rebooted, blown off a lot of dust and moths and kicked back to life one final time and we’re gonna try to cherish the heck out of it.

The hubs is excited.

I know! I was shocked too. Among the first thing he said was “Well at least this time we have money.” And “So are you changing the name of your blog back?” (See above).

The kids are THRILLED, especially my daughter, and quite honestly telling her has been the best part of this whole experience. I’ll go more into that later.

Bigger house/car? Ummm. No? We have a 2000ish sq foot house with four bedrooms. On average we use one. Mine. This kid can just cram in there too. Maybe someday when my kids actually master the concept of sleeping in their own rooms on a consistent basis we will consider an upgrade.

Our car has a third row we keep down. We are going to have to play with car seats and stuff but right now that whole idea gives me anxiety so… Next!

Oh and yea, this time we are going to find out the sex and not wait until the birth. I think we will know in a month or so. It’s been awhile things may have changed but I’ll keep you posted. 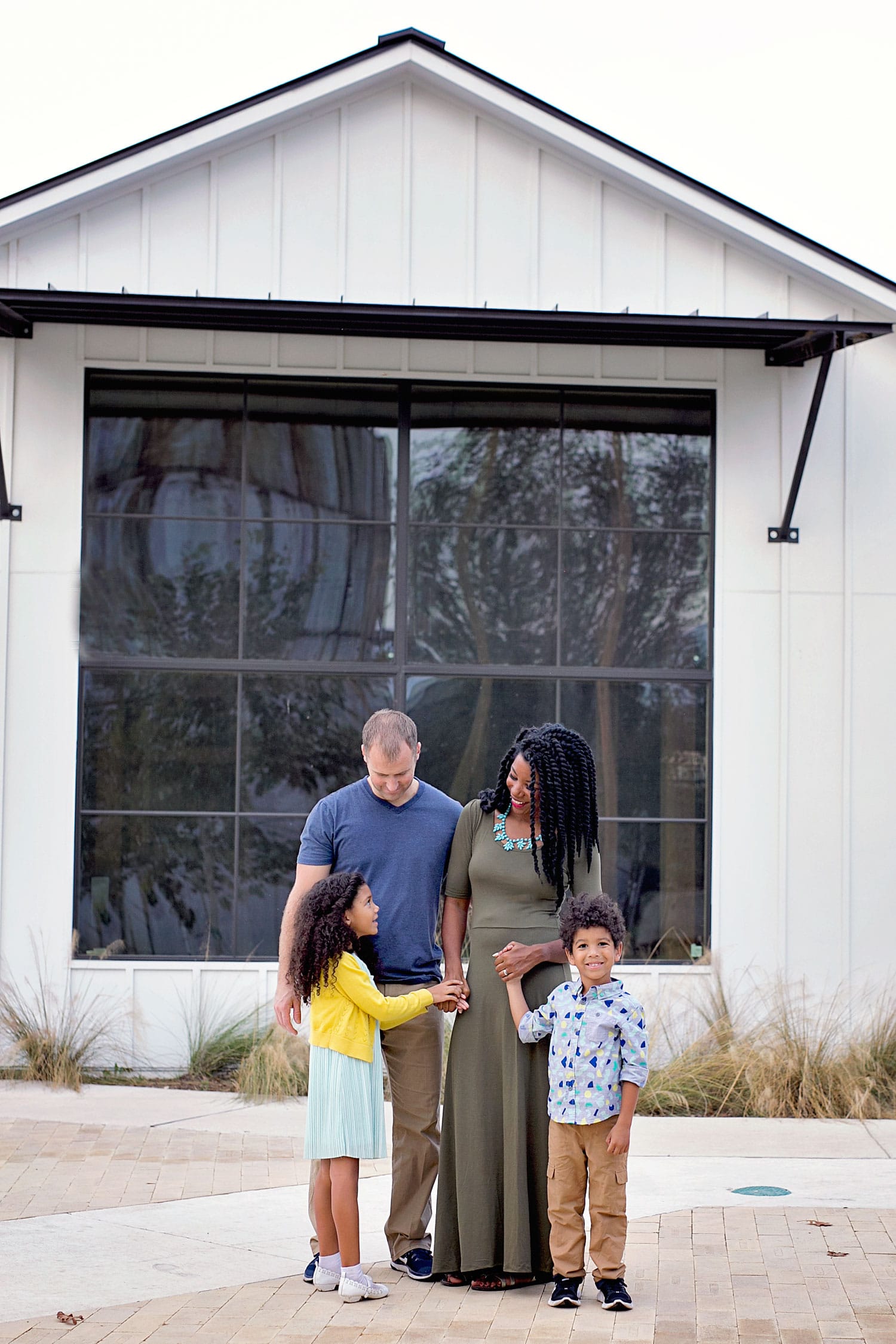 And I wasn’t pregnant in this picture but thanks to everyone who said they could tell I was.

KIDDING. I totally was.

Anyway, guess that’s all for now.

I’m sorry this has been sad and scary for you. Thank you for sharing your news with us and being so honest with us.

Congratulations! My husband and I each have a boy from previous relationships; they’re 8 and 9. We decided to get pregnant and hoo boy. I don’t know if trauma is inherent in pregnancies after you think you’re done, but that was the most stressful 40 weeks of my life. And yeah, fitting a third baby into our tiny townhouse is also no easy task. All of this is to say, congratulations and you’re definitely not alone in this situation.

First congratulations!! I’m sorry it’s been a bit of a rough go for you. Even when we planned another baby when our daughter was 10 (I know, was half way done and add another, we are indeed crazy) it was terrifying, scary, exciting, did I say terrifying? So definitely not alone in that thinking. Well yall make absoulty gorgeous babies and an amazing family. Y’all got this.

Congratulations to you all and thank you for sharing your real, true feelings. I would feel just like that gif if we have a third child, so I hear you. I can’t wait to follow along!

So excited for you and your cute family. I’m sorry this pregnancy has been rough and scary. I am way to familiar with all that and it’s awful. I’ll be sending all the good pregnancy thoughts your way. Congrats again.

So excited for you and your cute family. I’m sorry this pregnancy has been rough and scary. I am way to familiar with all that and it’s awful. I’ll be sending all the good pregnancy thoughts your way. Congrats again. ♥️

Thank you for your honesty!! I think it’s important for everyone to see something so real. As moms we are socialized to needing everything to be perfect. All babies must be planned, we must love all aspects of pregnancy and motherhood, when surprises like this happen we must be THRILLED . When in reality life is real. It’s not always butterflies and rainbows. Some days yes, but others are not. My first baby was not planned and yet we were thrilled and excited every step of the way. Baby number 2 was planned and I am due in a few weeks and I am excited but terrified. To the point of panic attacks even and this time around nobody is there providing the support they did the first time. People just don’t understand. So thank you…..I really love your honesty and I will continue to read to see about your journey!

Congratulations again! It sounds like there’s a lot to the story of sneaky.

We have a sneaky. We lost #3 in 2013 (16w) and then had fertility issues. Finally, got pregnant again 2015….with twins. My daughter was sad they were both boys, but she’s doing great with 3 brothers.

Congratulations! I’m sorry the beginning has been rough and traumatic. You may find it therapeutic to share your story someday and then again you may not and that’s okay too. You don’t owe anyone any explanation. This is you and your family’s time. Enjoy it and lots of love!!

Congratulation are in order for a healthy happy baby! I will be watching and reading for whatever you decide to share.

Congratulations on Sneaky! Hopefully the shock (freaking out) will subside so you can enjoy Sneaky??

As someone currently living in the ‘this is definitely God’s plan, not mine’ I appreciate your candor. You’re a great mom and I know this baby is SO lucky to get to be with *you* forever. Excited to follow along. <3

Your honestly is part of why I keep following you. I’ve been a reader since shortly after spawnie. Praying that 2018 is a great year for your family and can’t wait to follow along on this journey.

I am due in July with #3. Birth control and the back up failed. My marriage has been crap for almost 3 years. I already have a 10 yo girl and 4 yo boy. I was done. I am not excited yet. More like doing my job. I am 30. I was done with sleepless nights, changing diapers, breast feeding, pumping, buying formula and diapers, doctors visits, sick babies. I’m not excited ?

This is exactly what happened to us this March. We had two girls 5 years old and 20 months. I had pronounced to be done and gave away everything baby, even all the expensive Italian baby layettes my MIL bought us only to find out later that baby #3 was on its way. My first two were planned, but this time I was thrown for a loop and couldn’t quite feel happy about it. Well, baby #3 ended up being baby #3 and #4, twins! I wasn’t quite sure what God was telling me especially since I’m not working, we lived in a 1 1/2 bedroom rental, my husband’s work hours were cut, we drive a sedan and the list goes on. Throughout the entire pregnancy I was trapped in the middle of mild contentment and utter confusion. Now that the twins are here, I have a peace that passeth all understanding, it’s hard to explain. But just know all things work together for good to them that love the Lord.

Congratulations! Thank you for sharing with us.

I’ve been following since you were pregnant with your son primarily bc I was pregnant with my first and I enjoyed reading your blogs. Been caught up with life with three kids now so haven’t had a lot of time to keep up but still checked up on you here and there to see if you had a third bc I had a suspicion you would (don’t ask why haha) and I saw this post. Congrats! Three is chaos but more love for sure and you won’t regret it!