World Premiere of Disney’s Moana (I Was There!)

This past week has been a whirlwind. After all of the emotions from the election results, my last blog post went viral and as I boarded the plane I noticed my site went down. My blog was up and down the entire time I was out of town. So between interviews with The Rock and Lin-Manuel, I was on the phone with my host trying to get things working again.

I kept reminding myself to soak it all up. Despite what was happening at home (blog down, my husband handling protests and my mom having surgery) there was nothing I could do about it at this moment, and this was a big moment, a HUGE moment for me. 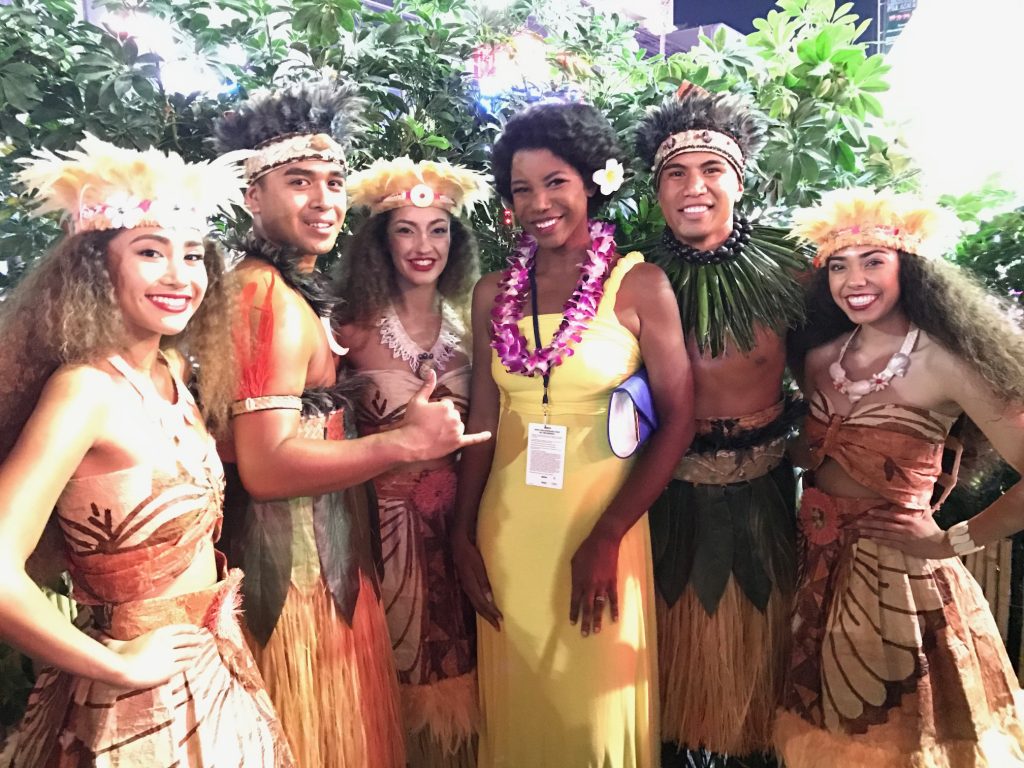 What I posted on Instagram last night pretty much says it all: “Last night was one of the best nights of my life. I got to talk to (and snap a selfie with) John Musker, one of my favorite Disney directors, congratulate (and snap a pic with) Auli’i Cravalho, star of Disney’s new Animated movie Moana (a movie I’ve been following and anticipating for years). And I got to watch it in a theater full of the cast and creators. The movie is nothing like Disney has done before and I’m excited to see it again (and again and again) with my kids. Truly a dream come true kind of night.”

Earlier this year I attended the red carpet event of The BFG. It was an amazing experience and I mean, I got to meet Steven Spielberg. That was cool. But this… THIS was amazing.

I love Disney Parks, I like Marvel and Disney movies, I LOVE Disney animated films especially the musicals. We haven’t had one since Frozen (three years ago) and over two years ago when I heard rumors about Disney’s first Polynesian princess movie I was all in. Fast forward a few years and here I am on the red (actually blue) carpet for the event. Unless John Musker and Ron Clements take another go at it with another princess (I asked what was next for them, they didn’t give anything away if they have an idea) there’s probably not going to be any movie experience that tops this for me for a very long time. 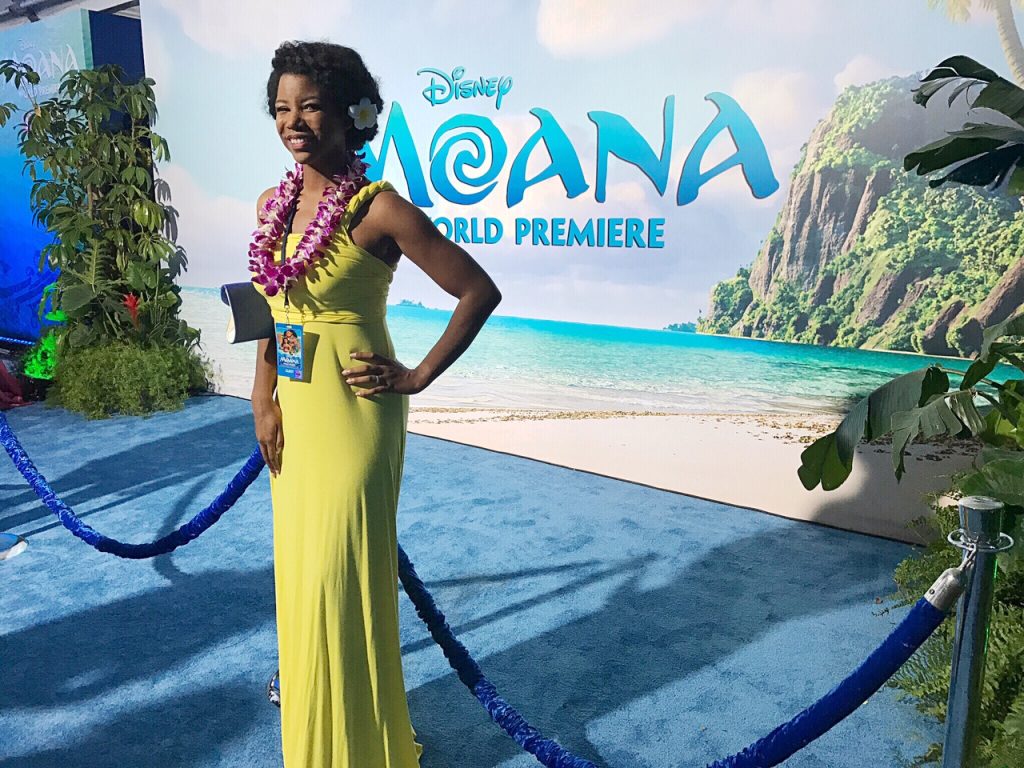 As we walked in we got gorgeous flower leis and made our way onto the carpet. There was a cute little area you could walk up and take selfies with the carpet behind you. So in this selfie over my left is Dwayne Johnson and Auli’i Cravalho, voices of Moana and Maui. 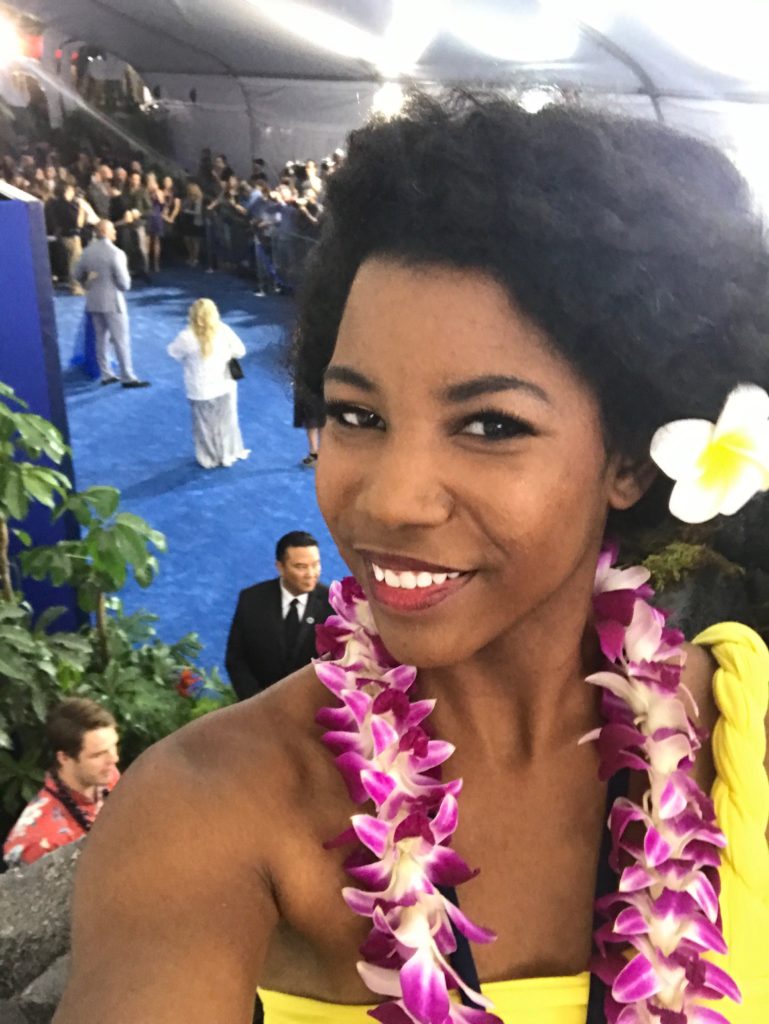 From the carpet we walked into the premiere party and I guess typically people hunt for stars but honestly I never know who anyone is anyway. I recognized Tori Spelling but didn’t ask for a photo. I was hoping to bump into directors Ron Clements and John Musker. The directed The Little Mermaid, Aladdin, Hercules, and Princess and the Frog, some of my top 10 favorite Disney movies. During our interview I told them how big of a fan I am. As I walked into the theater I turned around and there they were! Ron walked by and I chickened out but I asked John if he was feeling better (he mentioned his cold the day before). He said he was and that I looked so nice and grown up since the day before. Ha! My $20 Amazon dress paid off.

Oh yes, let me talk about my dress for a moment. So for my last red carpet event I spent way too much money at Dillard’s. This time I wanted something bright but classy. I was debating between this yellow number and a floral maxi style but I’m glad I went with this. It’s an infinity dress, it’s kinda like a Moby wrap up top and you can tie it about 8,623 different ways. I learned about 4.

I really liked the one-shoulder look and this involved boob stickies and a lot of confidence that I will probably never muster again. But golly this was the night of my life and I wanted to feel like a star. I got a lot of compliments including one from Auli’i herself. 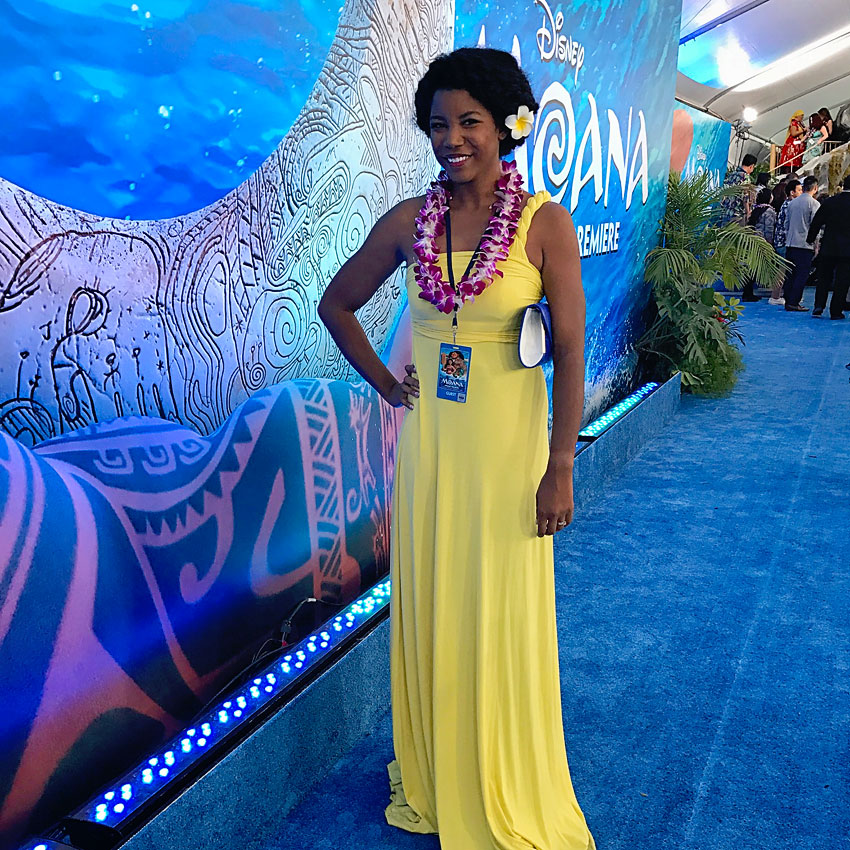 After the movie (which I have so much to say about the movie itself, that’s coming tomorrow), I saw Auli’i on my way out and congratulated her. She gave me a hug and we took a selfie in horrible lighting but you know what? I know what it is so it’s all good. 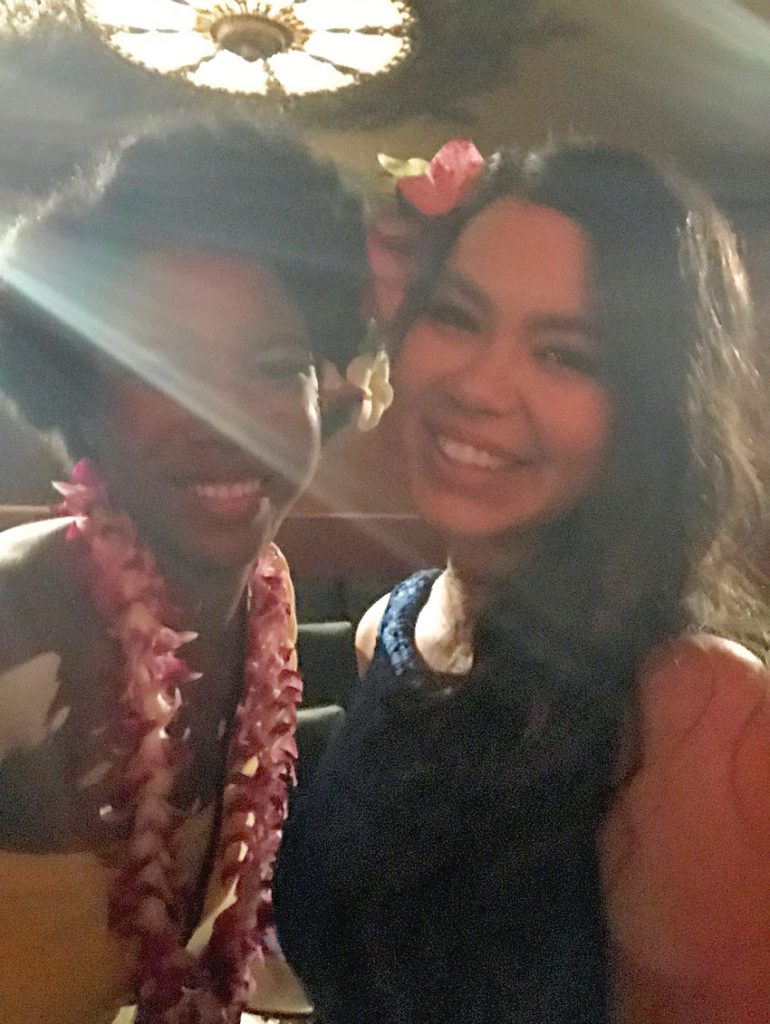 I watched as she thanked everyone and talked to a little girl. She’s truly a gem, Disney did great choosing Auli’i and I’m so happy for her.

As I laid in my hotel bed after everything that night and flipped through some of the photos and video I took I sat in amazement. Yea, that happened. And it was everything I’d hoped it would be.

Review tomorrow. I’ve written down my thoughts but I’m taking Lil’ J (and maybe Big T) to see it tonight and tomorrow I’ll let you know what we all think.

I love the dress. It matches your lei perfectly. I always come to your site for Disney reviews 🙂 I’m glad that you had a great time and I can’t wait to see Moana next week!

I had the pleasure of watching your pictures pop up on my facebook feed and I have to admit I was a little jealous but so excited for you!
This event would have been so much fun to attend for sure.
Can not wait for this movie to come out… only a couple more days till it hit’s theaters!!

What an amazing experience! I am so happy for you! I cannot wait to see Moana in theaters. I grew up in Hawaii (hence my name) and I am excited to show my kids a little of what I grew up with.

WOW I bet that was a lot of fun. This is going to be such a successful movie. Congrats on attending – looks fantastic!