I’m pretty sure third grade is when Barbie dolls were all the rage. I may have even had one stuck in the middle of my cake at my roller skating rink birthday party. Most of my gifts were dolls and rarely did any of them look like me. Did I care? Nope.

I played with the dolls until their limbs fell off, and sometimes even long after. I brushed their hair and styled them in the bathtub. I didn’t realize it at the time but a lot of those toys, along with the people I was surrounded by at school, influenced the way I saw myself.

My curly hair seemed unruly and messy compared to the slick shiny hair of my dolls. My eyes seemed so dark and boring. The “pretty dolls” I was gifted looked nothing like me. Therefore, was I not pretty?

While I didn’t take it to that literal equation (though self-conscious, I was always a pretty confident child) I altered the way I looked to match beauty standards. I straightened my hair, and even wore contacts–not to see better, but to change the color of my eyes.

As an adult, connecting all the dots, and becoming a mother to a little girl, I knew right off the bat we were going to do things differently. She’d see herself represented in books, movies and toys in ways I never did. I’ve made this a priority. 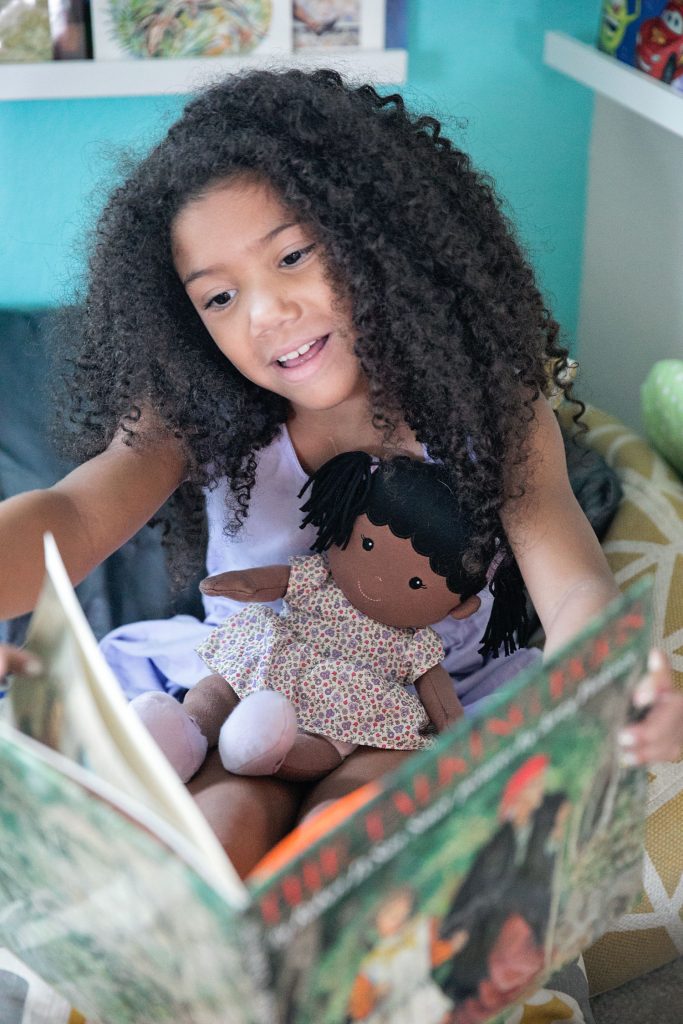 I applaud companies that also recognize the need for more diverse toys. Apple Park has long been a brand promising products that are safe for children, better for the environment and always beautifully green. But beyond creating soft baby clothes, and toys made from organic materials, they’re also aware of the importance of creating more toys that represent a wider rainbow of children. 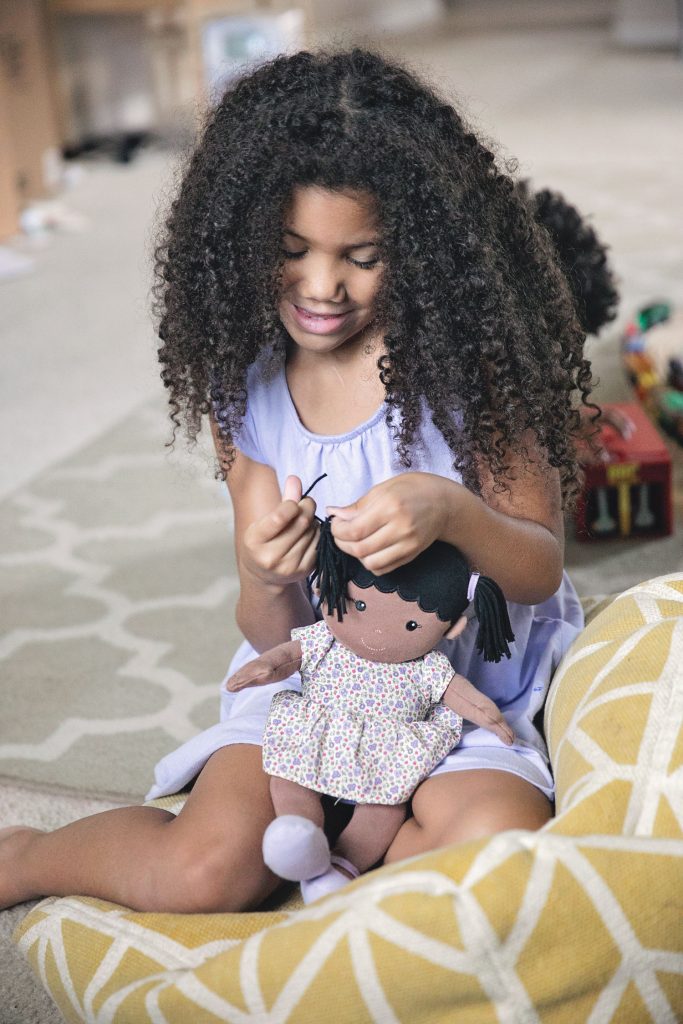 Apple Park sent us one of their new dolls and Lil’ J was so excited to open hers, and a matching one she insists is for her baby sister. I explained how this was a new doll, and their first that looked like her, to which she interpreted to mean it’s a special doll made in her image. I haven’t had the heart to tell her otherwise yet. But I do love watching her embrace dolls, toys and characters who look more like her than most toys I played with as a little girl.

In the 1940s, a study looking into the effects of segregation by psychologists Kenneth and Mamie Clark found that black children not only overwhelmingly preferred white dolls, but they also had negative perceptions of black dolls. I saw these dolls in the National Civil Rights Museum in Memphis, TN. It broke my heart reading how children didn’t want to play with the dolls with darker skin. The “doll test” was cited in the 1954 Supreme Court caseBrown vs. Board of Education, which led to desegregation. 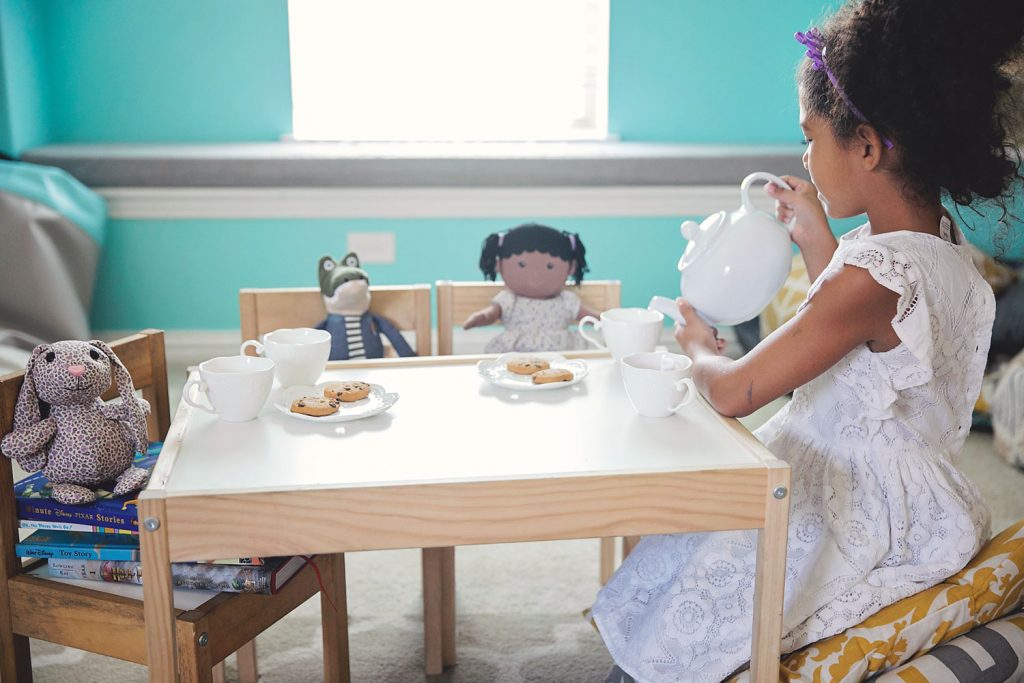 It’s important for every child to see themselves in a positive light, and to see the beauty in diversity in the world. That begins with the toys they play with and the books that they read. I’ve seen the difference it’s made in my daughter’s life and it gives me hope that we’ve come a long way and that things will continue to get better.

Our little girl on the way also has a super soft and snuggly first baby doll ready for her and I hope it’s a gift she cherishes a long time. 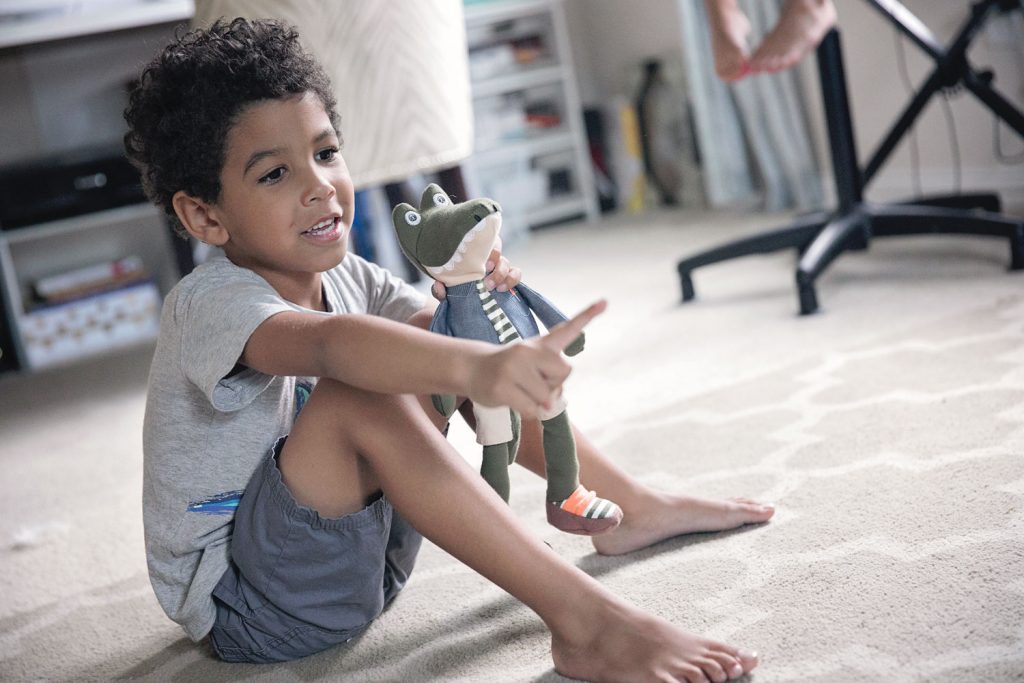 What a week you guys. Not one, but two giveaways for you! First off, Apple Park has a slew of adorable baby and children’s toys and items from books and blankets to dolls and backpacks. Use my code JB20 to get 20% off your Apple Park purchase from May 22nd until May 31st.

Now for the giveaway. One reader will win an Apple Park Prize pack filled with the sweetest goodies. This prize pack has a retail value of $150 and will include these items or items of a similar value:

To enter just leave a comment with letting me know what item you love on their website. Giveaway closes next Thursday night May 31st at 11:59pm.

Big thanks to Apple Park for being today’s blog sponsor.

The girls are talking about skin tone more right now, especially as summer approaches. My very fair daughter is starting to tan, and they all think it’s weird. They also have a new cousin and one of their first questions were “Does she look like us or is she like Daddy?” I like that they think of skin tone on a spectrum and not black and white.

I have two daughters that love to play with dolls. I only buy dolls that look like them for the same reason. The Mia doll is very cute!
http://www.applepark.com/baby-toys/www-applepark-com-baby-toys-organic-cotton-dolls-html/organic-best-friends-mia.html

I like this one. My twin boys love babies and need a doll to snuggle too. Gotta get them to be good daddies one-day.

How cute are their plush teething toys! The little snails and turtles and baby birds coming out of a shell. Eeee!

Thank you for sharing. Like you, I also wore the contacts and straightened my hair. Thankfully, my daughter has me too look up too now and she will now that she is beautiful just the way she is kinky hair and black-eyed. This item is nice for back to school: http://www.applepark.com/backpacks-lunchpacks/backpacks/eco-friendly-big-kid-backpack-purple-owl.html

It wasn’t hard finding many favorite items from Apple Park, but my most favorite is the cocoa plush bunny. It is so adorable.

The backpacks look so cute and adorable, especially this raccoon who looks like he’s ready for a hug!
http://www.applepark.com/backpacks-lunchpacks/backpacks/big-kid/eco-friendly-big-kid-backpack-raccoon.html

I absolute love the MIA doll. She’s so sweet and her two natural ponytails! I love her!

Jennifer, so many of our thoughts and memories from childhood are similar. From the hair straightening to the dolls, and most in between. I’m so glad to see the growing diversity in toys. Not that I would have only played with dolls and toys that looked like me, I would have appreciated having a variety, and playing with dolls that looked like my rainbow group of friends.

I love all of the dolls, but my favorite piece from Apple Park is an abstract onesie! It’s so cute! http://www.applepark.com/essential-organic-onesie-abstract-dawn.html

I also like the City Pals Plush Toy – Bettina Bunny.

They are all adorable but I love the bunny plush cocoa.

The Woodland soft blocks are too cute!

I like the Lamby Soft Teething Toy. Thank you for the giveaway!

My favorite is he pirate pig activity blanket but they have so many wonderful things that my grandson would love.

I love the baby dolls with the matching bunny ! Had my first girl 5 months ago and I think it’s time to buy a few dolls 🙂

I love the cocoa plush bunny

I love all the adorable toys, but my favorite item is the Essential Organic Onesies. They offer so cute patterns and they are fabulous for everyday wear!

I heart the raccoon backpacks!

I love the crawling birdie teething toy. It is so precious.

You are right, adorable!! How cute is their crawling snail teether too!?!? And I love the fox Eco-friendly Snackpack!

I love the raccoon eco-friendly snackpack.

Love reading your blog. Makes me know that I’m not alone dealing with issues/situations like these having biracial children! Although the Organic Best Friends – Mia doesn’t look like my kids, she’s certainly super cute and closer than the Barbies (-_-) that have been gifted to us. It’s a ‘Yay!’ for Mia! I also find the Essential Organic Onesie in Gift Box – Purple Cloud super cute!

The City Pals Plush Toy – Allistor Alligator would be great for my 9 month old grandson to grow with.

I love the purple musical turtle. It is so adorable.

Love their site. The toys are really cute. I think my little granddaughter would love the Best Friends Mia Doll. Thanks for having the contest!

I love this idea! I remember the dolls I was gifted when I was a kid, they are all blonde, fair skin tone, blue eyes, nothing look like me.

Hey everyone! I just found this great box from Walmart – only $5 and it comes with really great products and coupons for each stage of your baby’s life. I signed up here: https://babybox.walmart.com/ Just got my first box and I loved it!

seriously this shake me a lot. form now I will bring toys that looks like my fairy

I would love this for my daughter! She’s one soon and it’d be a perfect 1st Birthday present!! The Best Friends Mia Doll is my favorite, but all adorable.

So cool just like the love letter you wrote to your unborn baby. I will have to share this one with Granny Baby because it is so positive. It is similar to what the Proctor and Gamble brand did with a video that encourages #TheTalk.

For what age groups would you recommend these toys? My daughter is age six. She has enjoyed Snap Circuits Jr since last year. Do you feel these other toys will last for a while at her age? Thanks!!