Which Side of History Will You Be On? Call Out Racism With Me

One of the books we read a few months ago as a part of our 365 books challenge was Grace for President. A book about a little girl who is distraught at the fact that there have been no female presidents and she decides to run for president of her elementary school class. We read it on election day last year, but it was the first time we’d picked it up since. 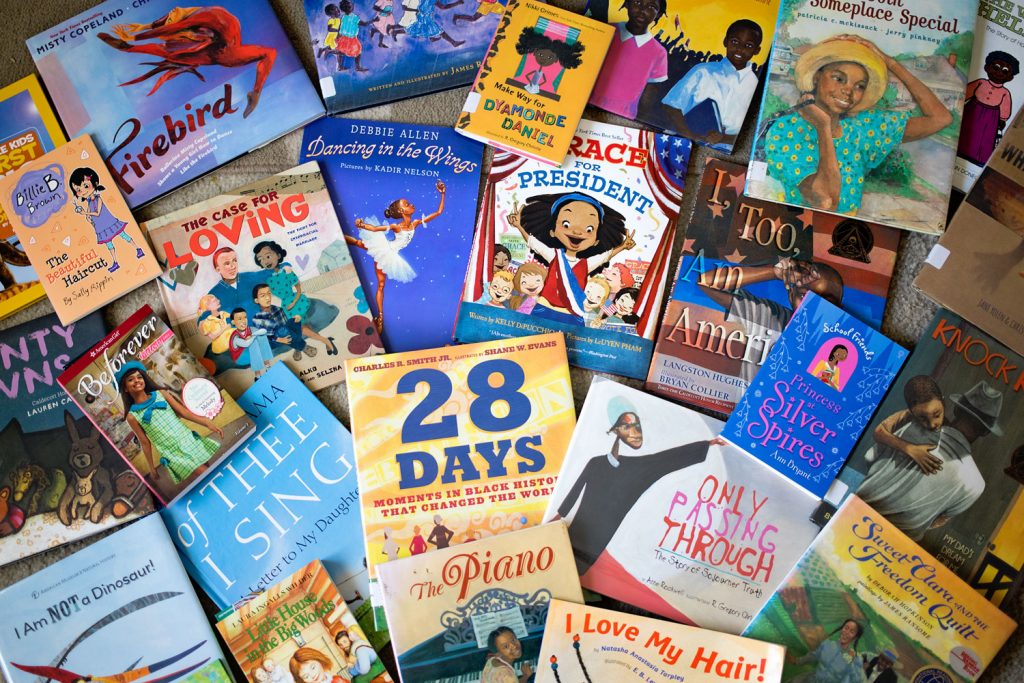 In the story the teacher opens up a poster displaying all of the presidents.

“ALL of the presidents?” My daughter asked me determined for a clarification. “Even Trump?” She emphasized his name with a hint of disgust.

My husband gave me a disapproving look.

“President Trump isn’t on the poster in this story because he wasn’t president yet when it was made,” I explained.

“Why is that good?” I ask. “Why are you acting like you don’t like him?” I mean, I have my reasons but surely my then 6-year-old wasn’t as up to speed as I was.

“Because he wants to build a wall to keep people out,” she replied. “That’s not nice. Plus people could just fly over it in an airplane!”

Her answer was so simple, yet political issues can be so complex.

I haven’t hidden my feelings about our new president. During the election cycle I was careful not to have too much of the news on, never knowing if his words or tone would be appropriate for my children.

Leading up to the election my daughter and I read books about blacks and women finally gaining the right to vote. My daughter stood with me in the ballot box as we prepared to make history. It didn’t go as we imagined. 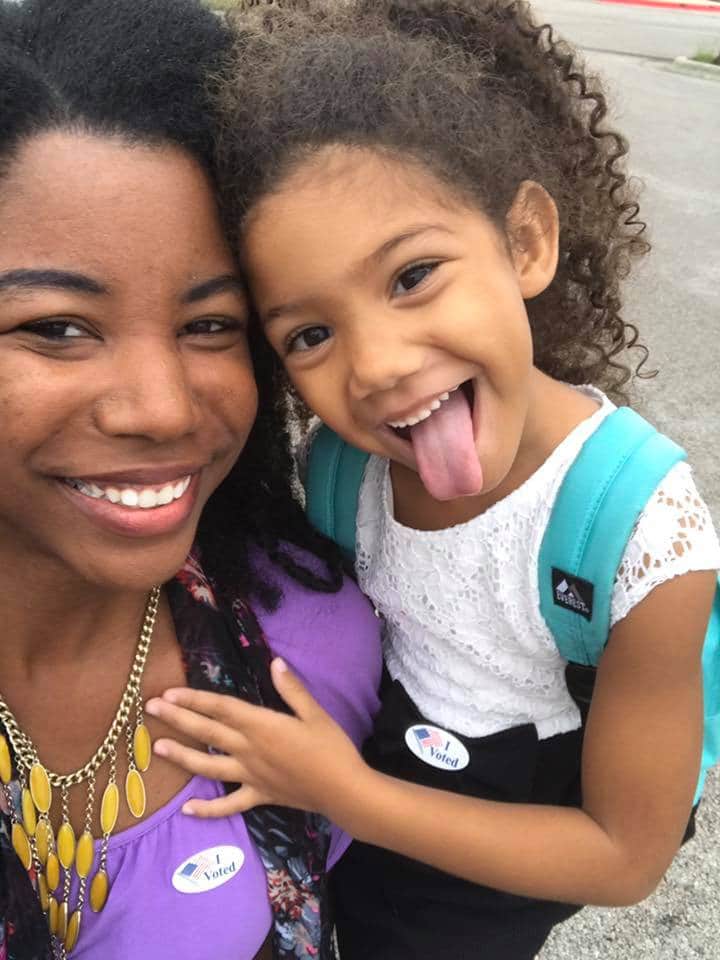 My disappointment was no secret November 8th. And now here we are in the middle of what I feel will be a very telling time in history. The thing is, history never looks like history when you’re living it.

“Well, what are some things you’d do as president if you were elected?”

This got her wheels spinning and turned the discussion into an educational one.

As we read about different presidents like Abraham Lincoln who signed the Emancipation Proclamation, Roosevelt who helped pull the nation through the depression, established dozens of national parks, and gave us gems like “Comparison is the thief of joy,” it’s hard not to feel a little discouraged. Like we’ve gone backwards.

During President Obama’s presidency our country not only witnessed our first black president, which was historic, but our nation repealed Don’t Ask Don’t Tell, established laws allowing those who love differently to get married, and helped bring us out of a recession. What will this era be known for? The president who tweets daily about news organizations he doesn’t like, throws fits and calls people he doesn’t agree with names? The president who doesn’t know who Frederick Douglass is?–Which by the way, after that press conference, without any context, I asked my then 6-year-old if she knew who Frederick Douglass was and this is her exact quote:

I was impressed but not surprised because history is one of her favorite subjects. In our homeschool curriculum we read it nearly every day. Then for fun we read more about history. My daughter has a wild imagination so she’s constantly asking for clarification on what’s fiction and non-fiction, historical fiction or myth. I don’t blame her for asking. Some of the things in our nation’s history can be hard to believe. 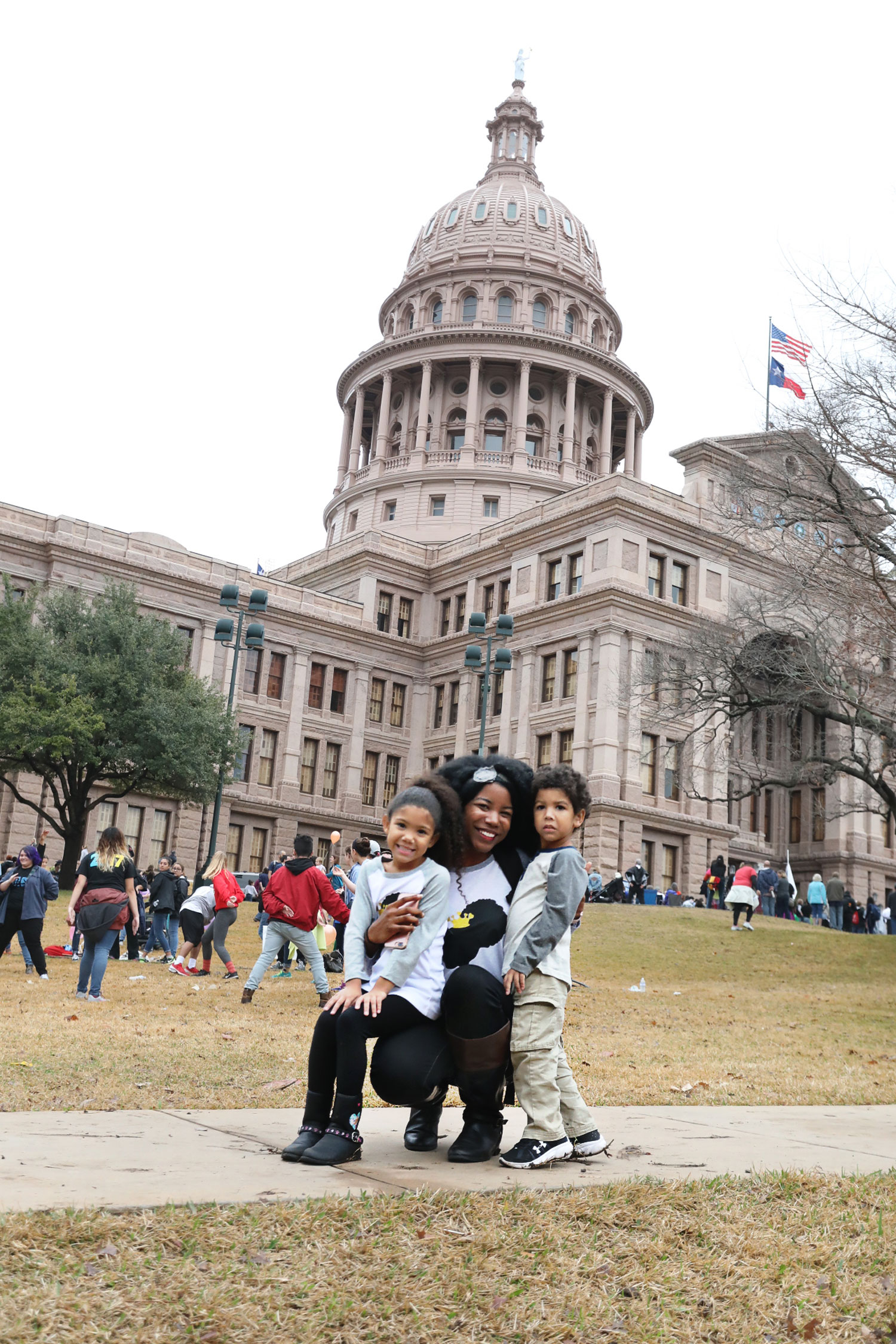 On MLK Day my grandmother told us how she was a teenager when she plotted to go down to D.C. for the march and speech at the Lincoln Memorial. “But my dad wouldn’t let me,” she told us.

I’m frequently asking my relatives what it was like, where they were, and what they thought about issues and events we only read about in history books. What was it like during the Civil Rights Era? What did you think of everything going on? Where were you when things were going down?

In 50 years, my grandkids may ask me the same questions.

What was it like during Trump’s presidency? What did you think of everything going on? Where were you when things were going down? What did you DO?

We have an extreme advantage today my friends. Not everyone will agree with me, but I’m an optimist so I’m going to go out on a limb here and say we have more allies, less hatred and hey… the internet! We have an advantage our grandparents didn’t have. What are we going to do with it?

Growing up I felt like I always had to tiptoe around racism. Part of it was my personality, not wanting to offend my classmates, or people at church (though obviously they weren’t as worried about offending me). Another part of it was fear. Saying the wrong thing to the right person could mean trouble.

I don’t have the answers for what will cure the world of hatred, or at least bring our nation together in our lifetime. But I do have a theory on what could help. And with that, a suggestion for everyone.

Never pass an opportunity to correct an act of racism. Don’t allow it in your presence, don’t condone it, don’t support it or be around people who do. And correct every single instance you hear it. Be a walking censor for racism. Yell BEEP, blow a horn, scratch a record, sound the alarm, nip that ish in the bud. And just to clarify, if you’re asking yourself if a conversation you’re hearing is racist, it probably is. So call. It. Out.

I know it’s hard to know what’s ok, not ok, or socially acceptable now that we have a president who skews all sorts of offensive remarks about different groups of people. But whether you voted for him or not, we can be better than that.

Years ago, I was alone in the editing booth with a fellow reporter, who happened to be white. I was lamenting about being ripped off with something. I said I was gypped.

“It is a word stemming from gypsies, who are stereotyped as being thieves.”

I backpedaled, tiptoed, and danced around my use of the word because I was feeling some kind of way about this blond chick who I may or may not have thought was racist herself, schooling me on racism.

Ok. I eventually resolved. I didn’t know. But now I did. And I have never ever used that word since.

“Now that I know better, I do better.” – Maya Angelou

She could have laughed at my story, or easily let my slip slide. But she chose to put me in my place. And honestly, I’m glad she did.

This particular woman was always extremely blunt. Not a strong suit of mine, nor a characteristic I have ever really grown to appreciate (though I do admire). But she didn’t pass this opportunity to correct an act of racism. My act.

Have you passed an opportunity? Who am I kidding, we all have. But let’s do better.

There are countless ways to do this. My personal least favorite is public shaming. That’s just not my style, and I don’t believe it’s the most productive. We all hope it’ll make the person retreat to their home, lick their wounds and come to their senses, but that may not be for a long time, maybe even a lifetime. Their wounded pride will close off doors, conversations and progression.

I felt embarrassed when the woman called me out even though it was just the two of us alone in a small room. Had that been in front of other colleagues I likely would have more feelings of animosity than admiration right now.  But hey, you know your crowd better than I do. And sometimes public arguments on a Facebook timeline result in others looking further into an issue. I guess what I’m saying is if you go this route just proceed with caution and be honest with yourself and brutally aware if it’s doing more damage than good.

That isn’t to say that you don’t call it out in front of other people, just be aware of the way you do it. If you’re at lunch with friends and you hear something you think is racist you don’t have to wait until later to pull that person aside and talk about it. The last thing you want is everyone at that table letting it go and walking away without doing a dang thing. A corrective statement could start like “Well actually…” “Did you know that…” or “I didn’t realize this at first but…”. Or keep something simple locked away like “Let’s not generalize.”

People don’t talk about negatively about blacks around me. But I’ll hear smack said about Hispanics. And if they’re talking about Hispanics around me, I imagine around their white friends everything is free game. Don’t let it be free game around you.

Look, NO ONE wants to be called a racist. And I’d say at least half of the country thinks the term is thrown around too casually and/or doesn’t understand that racism has many layers from subtle and overt to the blatant everyone sees as racism. I think that’s part of the reason we’re so scared to confront our friends about it. It’s why we let a joke or comment slide when we could instead insist on change.

Again, I’m an optimist. I have hope that even the most racist people could be reformed with the right conversations and intense therapy. But it’s never going to happen if we allow these things to be said in our presence. So be brave. Plant the seed of change.

Every time we let an act of racism go by, we’re passing up an opportunity to make a little impact on history. Leave the world a better place. Be the person you want your grandchildren to be proud of. So when they ask you what YOU were doing 50 years ago you can boldly state that you never ever allowed that. That you listened to minorities, then spoke up, and fought against racism every chance you had.

onlysolars.onlysolars. However,Authentic Vontae Davis Jersey, schools typically use day-time cleaners to clean throughout the day and handle any problems from sick or messy children. Combined with the boosting need for operate inches wide in the event it problem power technology really should Goal which presented the ability to develop backup using natural solutions just like sunshine along with wind flow vitality. To create power,Phillip Dorsett Colts Jersey, the electric firm needs to burn non