Which is scarier: Flying or flying with a toddler?

The flight home was significantly more difficult than the ride there. Not because there was more turbulence or anything like that, but because my daughter was wired.

It’s one thing when you’re flying with an infant. It’s actually pretty easy compared to flying with a mobile toddler. I’m sure it only gets worse before it gets better. 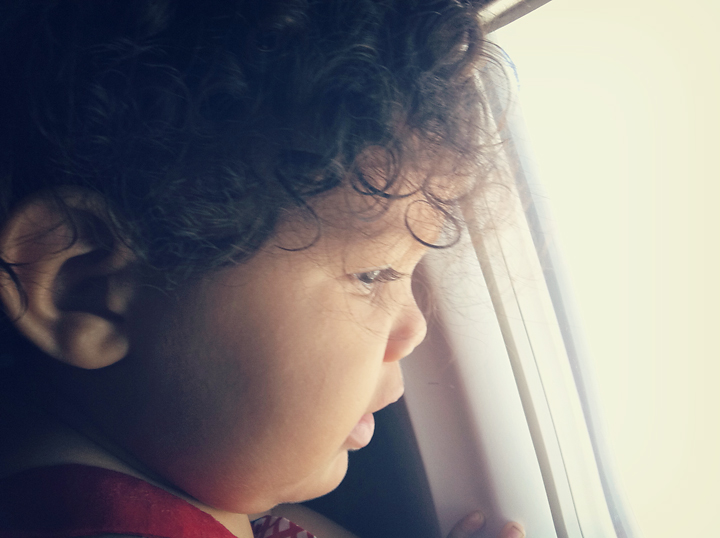 On the flight to Utah I held her the entire way while my husband tried his best to keep from passing out. –Ok so he’s afraid of flying but seriously?–It’s not that scary. What’s more scary is having our daughter scream her head off the entire time, trying to pull the hair of the woman in front of us, or crawl down the only walking space on the entire aircraft.

Luckily she wasn’t that dramatic, and I tried not to pick on my husband too much. I guess that would be like telling me to calm down in a room full of spiders. Ain’t gonna happen. So I let him go to his happy place listening to his sports podcasts in the darkness behind his eyelids. I had this. I’d flown with her several times by myself and this was flight number 11 for her. We were pros. But things did get a little humorous when he tried to step in after only seeing a portion of the situation.

Just listen to this… The flight attendant pushes her cart to our row of seats and asks for our drink requests. He wants nothing, but of course I want a cranberry apple juice with no ice. And of course our daughter would like some water with a bit of ice to suck on.

I down my drink as fast as I can and help her drink hers. I hand her some ice piece by piece and she’s quiet and content to suck on them until eventually she’s swallowed or dropped them all and all that’s left is the water. She does a good job of letting me tip the cup of water into her mouth so she can sip a little at a time. We do this a couple of times and get into our groove.

At this point anything that will keep her still and quiet for 10 minutes at a time is awesome. We had already rotated playing with the window shade, tray table, and ripping up the SkyMall  magazine. Water was our current distraction. Just as she’s getting her last sip she sneezes the cutest sneeze into her cup of water and tries to grab the cup.

I guess the sudden movement startled my husband because she snapped out of his happy place and opened his eyes to notice Lil’ J grabbing the cup of water. To him it may have looked as if I was struggling with her but I really had it all under control. He silently pried her hands from the cup in a furry and downed the water in a split second. All with Lil’ J and I staring wide-eyed wondering what just happened, and before I could warn him she had just let a big sneeze into that little cup of water.
It was so sudden, fast and hilarious to me that it took me a good five minutes to stop laughing and tell him how funny that looked to me. Oh, my silly husband. 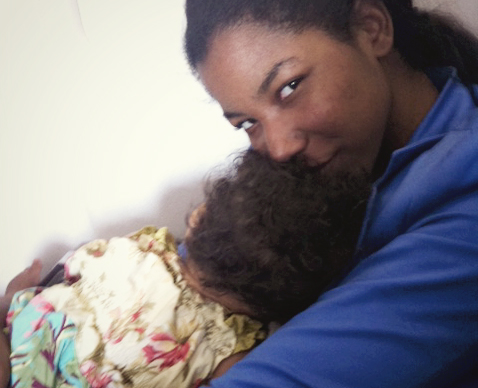 Of course, we arrived safely. She eventually fell asleep and I got to catch a few Zzzz’s myself. We made it home from our trip to find Snoop alive, thanks to a sweet young man from our church. And I had a day off to recoup from my vacation before going back to work.

EVO Conference was great, best blog conference yet! We also went to Lagoon, and Lil’ J went on her first rides. Oh it was so cute, and sad. I’ll tell you all about it this week.

The adventure of travelling with Lil J as toddler it fun, but I am sure it was a little bit stressful. I’ve heard it is difficult to travel with toddlers more that new borns. We are thinking about going to UK a month after our baby is born but we are still contemplating about that.

I remember Lil J’s first trip to last year’s conference, she was so tiny :).

you are so brave. my hubby and i promised ourselves we wouldn’t take lil man on his first flight till he’s 5. he’s a wild one, and will go crazy if he has to sit anywhere for more than 20 minutes.lol

hahaha, good thing she was as surprised as you were & didn’t start to cry immediately … too funny!

my tired, weak eyes thought the post said your “fist fight” with a toddler…glad that wasn’t the case! lol!

OMG! woke up and having such a bad day, opened my email to find your new post, LOVED the photo of Lil J looking out the window, and then got to the end and can totally picture the look of shock on your guys faces! i laughed so hard!!! thank you for making my day a little better!!! awesome!!!

Thanks for sharing! We have Nia’s first flight coming up just 1 week shy of her 1st birthday. I definitely think breastfeeding and her new lovey will help us get through the flight (I just wrote my thoughts up on this today!).

Valuable information. Lucky me I discovered your site by chance,
and I am stunned why this coincidence did not came about earlier!
I bookmarked it.