When I was in the third grade I always got bad marks. My grades were fine, but I couldn’t control my talking. My teacher and I didn’t jive well. She was trying to teach and whatnot and I really wanted to socialize. At the end of the year she suggested I take theater classes to put my drama and mouth to good use. This advice ultimately led to me learning a good lesson about taking chances, the hard way.

Turns out being dramatic doesn’t mean you’ll be a good actress. I found this out as I prepared for my first musical.

We’d been practicing techniques for what felt like years, but was probably just a matter of weeks. Our director dished out the parts for our final performance. I had one small role and she offered me another. I’d be on stage with just one other kid who would play the class bully who kept pulling my pig tails.

“And Jennifer, since you wear your hair in pig tails, I thought you’d be perfect for this part!” The director said.

She looked at me, waited for my elated response when I did something probably no child had done before.

“Oh, that’s ok, I’m wearing my hair down for the play,” I informed her. “Down” meant going to the salon, and having my hair blowed dry, and pulled straight with a searing hot comb. I’d be at the salon for hours, bawling most of the way through from a tender head, but then so happy with the shiny silky end result.

“So…” She slowly asked for clarity with a confused look on her face.  “You don’t want the part?”

“No thank you, I’m wearing my hair down!” I added in an air hair flip for good measure.

“Ok,” she said, exasperated. “Who else wants the part?”

A slew of hands went up.

It went to Becky with good hair.

I didn’t regret my decision. That was, until my mom found out what I had done. She was so livid. Something about “with all the money we spend…”. She made sure that my braided pigtails were exactly what I wore the day of the play.

It was my first harsh experience with letting a chance pass me by. Would this chance later have been the first door that led to my broadway debut? No way. But on stage, as I watched Becky play the part I passed up, I realized that could have been me, and I let it fly right by.

I’ve been talking to my kids about chances lately. Especially my daughter. At the start of her competitive cheer season she was scared to go up in her stunts (where other little girls lift her up above their heads). After a few times of saying “no thank you” she started to notice her teammates trying bigger, more advanced stunts. After awhile she asked me why she wasn’t getting to try some of the new things.

“Did you tell them you wanted to try?” I asked her.

“No,” she said. She told me she said she was scared, but then later when she saw someone else try, she realized she wanted to too.

This immediately set off a spark in my mind. We’d recently read What Do You Do With a Chance by Kobi Yamada. In the story a little boy sees chances flying around him. As he goes to grab one, he stumbles. Other kids laugh and he tells himself he’s never going to take a chance again.

The chances continue to fly by, but after a while he notices he sees them less and less often but he continues to let them pass right by. Eventually they stop coming around all together.

Later in the story he sees one again, and I won’t spoil the ending for you, but it’s a fantastic children’s book by the same author who wrote What Do You Do With an Idea that makes me equally weepy.

Anyway, I reminded my daughter about the story we read together and asked her if she remembered what happened to the chances as the little boy kept ignoring them. It really helped personify the idea of opportunities, and I’ve seen her become more willing to take chances that she’d ordinarily be too scared to take. 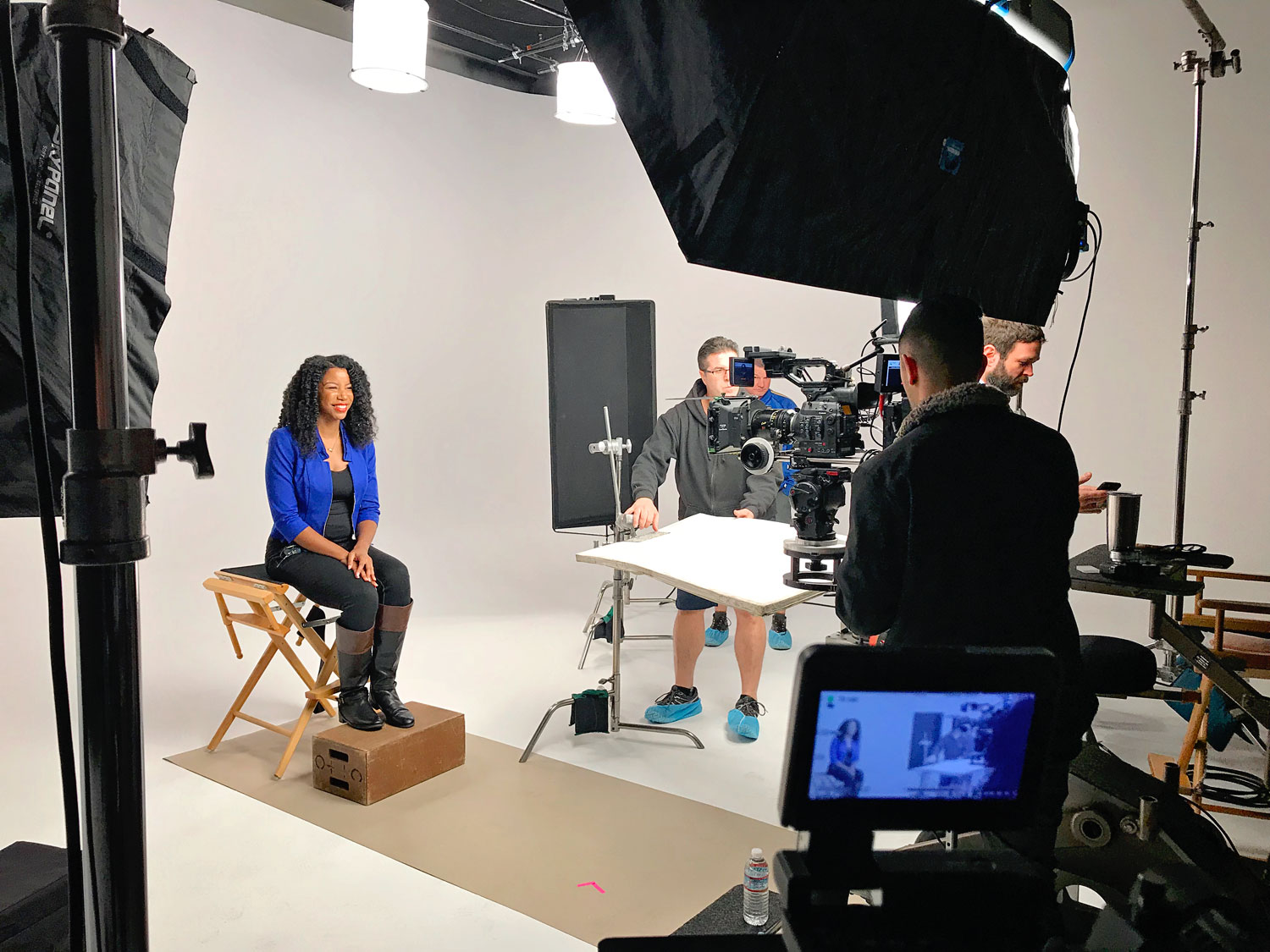 A few months ago I got an email from the Oprah Winfrey Network inviting me to be a part of their OWNShow programming. I was in a weird place with the pregnancy. In fact, I missed their first two or three email attempts because I was in so much of a funk. I didn’t know a lot about the opportunity but from what I could tell I didn’t feel worthy or qualified to even be on these people’s radar. I was scared but I also knew I couldn’t let the chance pass by.

I said yes and a month or so later I was sitting in a studio, chatting with Oprah’s producers about my blog, life tips and ways to cherish your everyday. Wow.

At first, under the lights I was completely out of my comfort zone. For a decade I was the one asking the questions and interviewing guests. Now the questions were turned on me and it was a nerve wracking. But it was a pivotal moment for me where I realized I have a message, and though not always clear it’s getting through and people are noticing.

So far a couple pieces of the interview have aired on OWN and a couple more have been shared on the web. I’ll try to embed one below.

Since then I’ve been thinking a lot about opportunities, and chances. I’ve been paying attention to things that come my way, taking my time before passing, and I’m refusing to let fear lead my decisions. Had I let fear make my decisions I’m not sure I would have been brave enough to quit my job as a news anchor. Leaping full time into this blog years ago was a huge chance I took. Thanks in part to an inspired fortune cookie that literally told me to take that chance. And just last week I found out this little blog I took a chance on is nominated for blog of the year.

When I was 10, passing on a big chance for a role in a play I did it out of naiveness and vanity. But nowadays when I pass on an opportunity it’s like my daughter said–because it’s scary. There are moments when we’re terrifyingly doubtful of the outcome. But we are responsible for our own decisions and happiness. We have to decide we are more excited for the possibility of a good outcome than we are fearful of a bad one. Decide you want it more than you fear it. Then jump.

AWESOME… thanks for sharing your story!! Iived in fear and it crippled me until my first daughter thought me a lesson in the way she came to this universe! I still struggle but I’m learning

I’m so glad you got something from this story Shirley. I think it’s totally normal to struggle with fear from time to time but you’ll get there. Thank you for your comment! <3

I love everything about this! So cool that you are working with OWN!!! Can’t wait to meet you at Mom 2.0! I voted for you and hope you win your category at the Iris Awards!!

Sarah, thank you for your sweet comment. I’m so glad you enjoyed this post. Please please day hi to me at Mom 2.0! I’m excited for the little gettaway!

I gotta say, I stumbled upon this blog because I took a chance on following a SUPER random Pinterest post about a DIY Tampico art project while I was looking for nail art. I literally stopped in my tracks and thought “You can do arts and crafts with a juice? How, Sway?”. Lol, I had to know.

A few clicks after I discovered you can do seamlessly unlimited arts and crafts with Tampico (Lol, pleasant surprise), I stumbled upon your gardening colab with that blog. So, I followed the pretty little brown girl just in case it would result in more gardening or hair tips. Low and behold, its a win/win! This blog has everything!

My family started recording our gardening from scraps adventure LAST year but I’ve been too scared to post it (or anything else) on our family blog. Following that randomly placed Tampico pin led me up a rabbit hole instead of down one because it led to this specific post at the moment I was contemplating throwing in the towel before I really picked it up, lol. This is really motivating. It really spoke to me about the benefit of taking chances. Let me stop imagining the worst while I put forth the best.

I’m so glad you took a moment to stop and leave a comment. I’m sorry it took me so long to reply but it really made my day… Actually my week as I’m still thinking about it 🙂 I’m so glad that a little trip UP a rabbit hole led you to my blog and I’m so happy to have you here! Yes, I hope things go well for you as you put forth the best and let go of fearing the worst. I’m excited for you!

Thank you for sharing this powerful testimony with us. This is exactly where I am right now in my life season. No longer will I make choices lead by fear. I am trusting more and more that the dreams and visions God gives me are for me to work out. I am trying to be alert for the opportunities that are passing by. I am learning that things don’t always come in the way you had in mind, but one opportunity can be a open door to the next great opportunity. We have to keep our eyes open xxxx