What did I make this week? Plus an Announcement!

What did I craft or cook up this week? Nothing. Absolutely NADA. Unless you count turkey sandwiches, but I didn’t take photos so I’m not sure that counts.

It’s ok though. It’s been one of those weeks. I’m working 6 days in a row, and feeling worn out to the max. BUT there are some good things happening.

Lil’ J is OBSESSED with buses. She yells and points every time we pass one like she’s trying to catch it. We’ve taken the bus to the park three times now and she asks about them daily. I have tons of pictures I need to share and blog about this cheap fun idea but until then, here’s a few of our most recent trip taking a bus to a concert.

The concert we were riding to see? Boyz II Men! Saturday night we had VIP clearance at the Austin Urban Music Festival. I was literally a couple of feet away from touching Shawn, my longest-lasting crush. I told Lil’ J to waive at him. She was watching the whole thing from my backpack carrier. More on this later!

Another positive? I picked up the keys to our new place yesterday. I still haven’t packed a single box but we have a month of overlap so I’m not exactly freaking out yet.

I have a strange impulse to collect as many boxes as I can, before packing any. *shrug*

And finally, for the announcement… 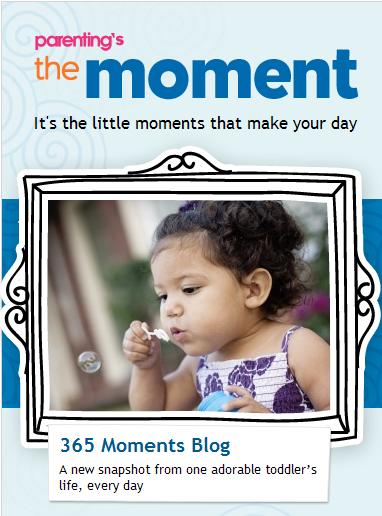 I hinted to an exciting project I’ve been working on for months, long ago. Today it launched on Parenting.com and it’s sponsored by Hallmark. I haven’t been doing my 365 Love Letters on this here blog because I’ve been working on capturing 365 Moments there. I’m so excited and I hope you’ll follow along and even add your own photos capturing special moments in your family’s life. One could even be published in Parenting Magazine! I’m crossing my fingers I’ll get to see Lil’ J in there one of these days.

I imagine a lot of photos coming up will be of moving boxes. OY!

Just because I didn’t make anything crafty doesn’t mean I don’t want to see your domestic skills. Link up and share!

what an exciting project!! Congratulations!

How exciting! Heading over to check out the 365 moments on parenting.com.

I hope that you are able to find the time to pack. Moving isn’t a fun task (I did it twice in one year!)

Congrats on your 365 project with Parenting!!

That is very exciting!!! I do Daily Carmen’s for my daughter on facebook so my family can see her. But I love your idea! Look forward to seeing them!

We haven’t ridden a bus but you make me want to take a ride in one with my Little one!

that’s exciting news. so happy for you. lil j. looks adorable as always.

Your daughter looks adorable in these pictures, as always!

Exciting news about your new project! yippee for photo memories 🙂

Congrats on your new project!!!

Oh my goodness, I am so JEALOUS! Not fair……. 🙂
And, she’s getting so big and so adorable!

Wow Jenn – that’s awesome! When I was scrolling down after you mentioned taking Lil J to the concert I was expecting to see a kiddie group or something and LOLed when it was Shawn! So excited for your new project too. Congrats!

When I saw your blog title in my reader, I clicked over as fast as I could and WOW! You are making your way into my S-Hero list. Congratulations. The first 2 days look beautiful and good luck with the move. I’m moving on Wednesday! Not brimming over with excitement just yet

What a great project! Do you know if there’s a way for me to subscribe to just the project via RSS? I wanna keep up with all the photos!

I just started riding the bus/train to work instead of driving…and I think of you and Lil J.

Good luck with the move!

We saw Boyz II Men in Orem a couple of years ago and they were amazing!

I have always enjoyed your photographs! What a great project. Thanks for the Linky party!

Congrats on the 365 project!!! Me and Layla are STILL waiting on our invitation to come and do one of these fun concert/festival things with you two ladies. Ahem….I kid. Kinda. 🙂

Congrats! I love love Boyz II Men and would love to see them concert too!