We Are Going to Disneyland!… (Well, Some of Us)

This was sort of a last-minute decision. Long story short, Disneyland Resort loves Lil’ J’s Disney Princess photo series and asked if we wanted to come out to take pictures of her as Aurora at Aurora’s castle.

Now how could we say no to that? Since we don’t live close, and have to fly, we decided this trip would just be for Little J and I. I was SO torn on this decision and really wanting to bring both kids. But in the end we came to the conclusion that it would be easier and more affordable if it was just the two of us. My husband has been to Disneyland, my daughter and I have not.

I will most DEFINITELY make it up to Big T through the years to help ease my guilt. I’m already planning on taking him to an amusement park when we visit family in Utah at the end of the month, and maybe even a Disney trip of his own when he turns 5.

Ok, so after I convinced myself that I’m not an evil mother for taking just one of my kids to the happiest place on earth, I got REALLY excited for our girls getaway. Flying with just one child, doing whatever we want without daddy or little brother slowing us down. Princesses and magic all day and all night. I can’t believe we’re actually going to Disneyland. It’s going to be amazing!

So, after my husband agreed to us taking our mommy/daughter trip we decided to reveal the surprise on her birthday so we could try a quick countdown. Before we left for Disney World we told her a couple hours before we left. We still haven’t told her about our Disney Cruise that’s five months away. We’re trying to see how she can handle waiting and so far so good.

Hindsight, telling her on her birthday when she’s waiting for friends to come over for a sleepover, and wanting to play with her new toys wasn’t probably the best time to tell her.

Here’s the setup for the video… Elsa came to Lil’ J’s ice skating birthday party. When we got home we gave her a letter that “Elsa dropped off” from another one of her princess friends. Lil’ J was trying to guess who it was from as the video starts.

I was only a little surprised that the first thing she thought of was Cars. She’s loving that movie lately and a while back I told her Cars Land was at Disneyland in California. Ever since, every time she hears about someone who went to California she asks if they saw Lightning McQueen.

At the end of the video, when she talks about meeting Sophia, that’s because though I tout her meeting all 13 Disney Princesses at Disney World, she corrects me and says she didn’t meet Sophia. She did wave at her at Hollywood Studios, but didn’t get a picture or her autograph, and she wants to right that wrong. 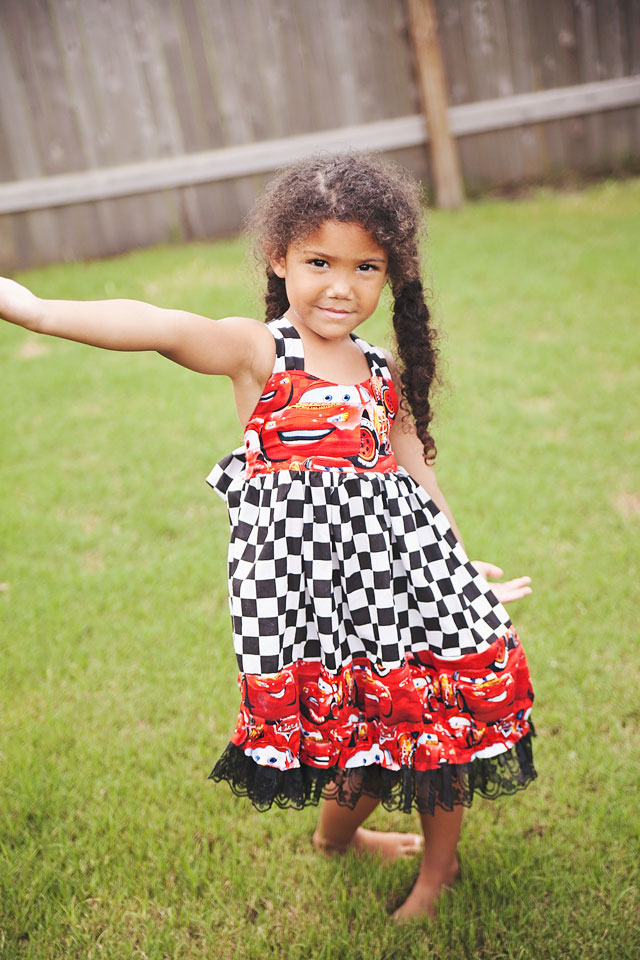 We made a paper chain to countdown the days and she’s gotten really excited realizing how close it is, but she was also concerned about something. Yesterday morning she came to me.

“Mommy, you can use my money so we can go to Disneyland,” she said.

“No, because we need to save lots of money to go, remember?” It’s true, I’d been saying this every time she’s asked about visiting again, and said it would probably be when she was 6 or 7.

“Yes, but Princess Aurora is helping us come,” I told her. Since actual admittance is covered.

“Oh, she’s using her money?” She said getting excited. Apparently she understood the invitation as just that, an invitation to come and see her sometime.

“Well, yes, to come and see her castle, but mommy still used some of her money for the airplane rides,” I explained.

“Ok, well you can use my money for that.”

“How about you save your money, and if you see something cool you want to buy at Disneyland, you can use it for that.” I suggested.

She was happy with that idea. 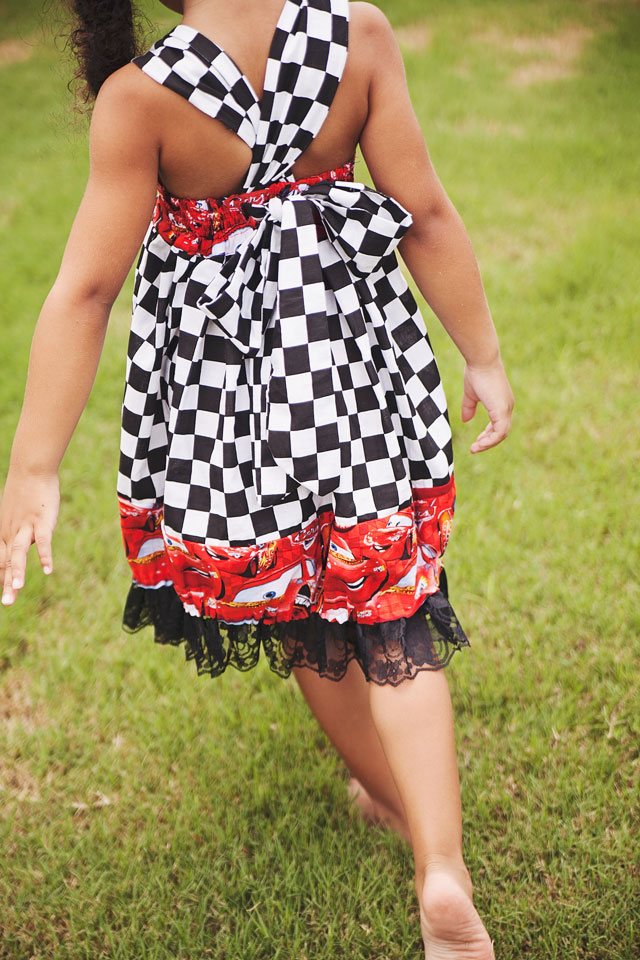 Already we’ve been having a fun time crafting a Minnie Mouse paper chain to countdown to our trip, and after browsing for something she could wear to Cars Land and coming up short, we sewed our own dress (adapting this pattern for anyone who is curious). We will be taking lots of photos there too, and meeting up with Vanessa from De Su Mama who is a Disneyland PRO!

If someone told me a year ago that we’d be going on three Disney trips this year I’d laugh and say they were nuts. But they just keep falling into place. A perfectly-timed multi-generational family trip to Disney World, a Disney Cruise port popping up in Texas, and a Disneyland invite during their Diamond Celebration. PINCH ME!

Now I’ve just gotta find a way to take my family to Disneyland Hong Kong, Paris and Tokyo in my lifetime and I’ll die a happy woman.

Have you ever taken a trip with just one of your kids? Did you feel guilty?

Ohmygoodness, Jenn- this is the cutest! I love how she was concerned about Sofia & Lightning McQueen, first and foremost. What a lucky pair you two are!

Also– laughing at Snoop and B in the background! LOL!

Omg no idea what those boys were doing. Haha. And thanks! It wasn’t the reaction I was expecting. Lol.

Lol. Don’t feel too guilty about your son, after all, he did go to Disney World!! I have yet to take my kids to any Disney parks. It just doesn’t feel worth it to spend all that money on this age when I feel like half the day would be tired meltdowns.

Haha Marie yes my son did get tired of being in the stroller after a while. Though he would have fun if we brought him, and he’d be free, he would probably be way less stressed at home. Do you live far from the parks?

Lucky! Can’t wait to see all the pictures 🙂 I’m in my 50s and still haven’t been.

Oh Bren do you want to go? It’s never to late!! Are you a Disney fan?

Your daughter is so adorable. I want to take my kids to Disney but I am waiting until they are older so they will actually remember it and be able to enjoy the experience.

Thanks Victoria!! Yea knowing that my son won’t remember this trip makes me feel a lot better about not bringing him this time. My daughter for sure will remember. And hopefully we’ll go again when she’s older.

Cutest video. Her reaction is awesome.

Don’t worry about not taking your son. He’ll get to do mommy/son trips and daddy/son trips and Lil J will do daddy/daughter trips… and it’ll all just be awesome. Life ain’t fair. Just make it fun. (And not HORRIBLY unfair. LoL)

She cracks me up! Also, I am absolutely LOVING how you had her hair done that day! Sooo cute! I love that she’s into Cars too. 🙂 But in all seriousness – she LOOKS like an actual Disney princess. What a doll.

Im so jealous lolzzz I know you had such an awesome time. I STILL remember when i went with my son a couple of years ago. Enjoy say hi to all the princesses.

That is one wonderful surprise. What a lucky little lady! We just got back from a weekend at Disney and it was pure magic as always!

she looks so adorable and happy in these dresses. Love that you surprised her on her bday too.

Your daughter is such a cutie! How cute that she wanted to know about all the other characters but Aurora. Like you I would have been torn to go to the happiest place on earth leaving my hubby and son behind. However mommy daughter time is ALWAYS special.

That is so cool!! I love her Cars dress. i can’t wait until you ladies come back and share pictures and stories.

Thanks April. It was nice to start sewing again. I can’t wait to do more. And yes, goodness, she’s enjoying this countdown! Can’t believe we leave tomorrow!

I’m still trying to talk my husband into Disneyland Paris in two years. So far he isn’t falling for it, but I’m planning it as if we are going. LOL!

I’m with you!!! How about we go together? haha. I like your thinking… Planning it as if you’re going. Totally what I do.

Thanks so much Emily!!