Do you want a spanking?: She says/ She says

My husband and I never sat down and discussed an official discipline policy for our kids. We both know that each child may respond to various tactics differently, whether it is a time out, a talking to, or a spanking.

Growing up I didn’t get time outs, or even spankings. My dad gave what we called whoopings. As in, “go grab the belt, you’re getting a whoopin.” Yea, ouch.

My mom only spanked me a handful of times. I think once with a flip-flop, another time with a wooden spoon. It never hurt, but I was smart enough to pretend like it did so she thought I learned my lesson. Trust me, it was better than the alternative.

I definitely don’t see belt whoopings in our disciplinary future, but I will admit to giving a whimpy spankin a time or two. Something to get her attention, but never anything I’d consider remotely damaging.

My husband on the other hand, has given a firmer hand a few times, and in turn, she tends to take him more seriously when he asks her to do something she may not feel like doing.

Most of our frustrations revolve around bedtime. We go through a long bedtime routine, read stories, sing songs, and say prayer. Then moments after leaving her room she’s coming out wanting to talk, see what we’re doing; sleep in our bed, or whatever. On nights her daddy is off, she usually stays in her room. On the nights he’s working, she usually doesn’t. Which can be troublesome since that’s usually when I get a lot of my work done. 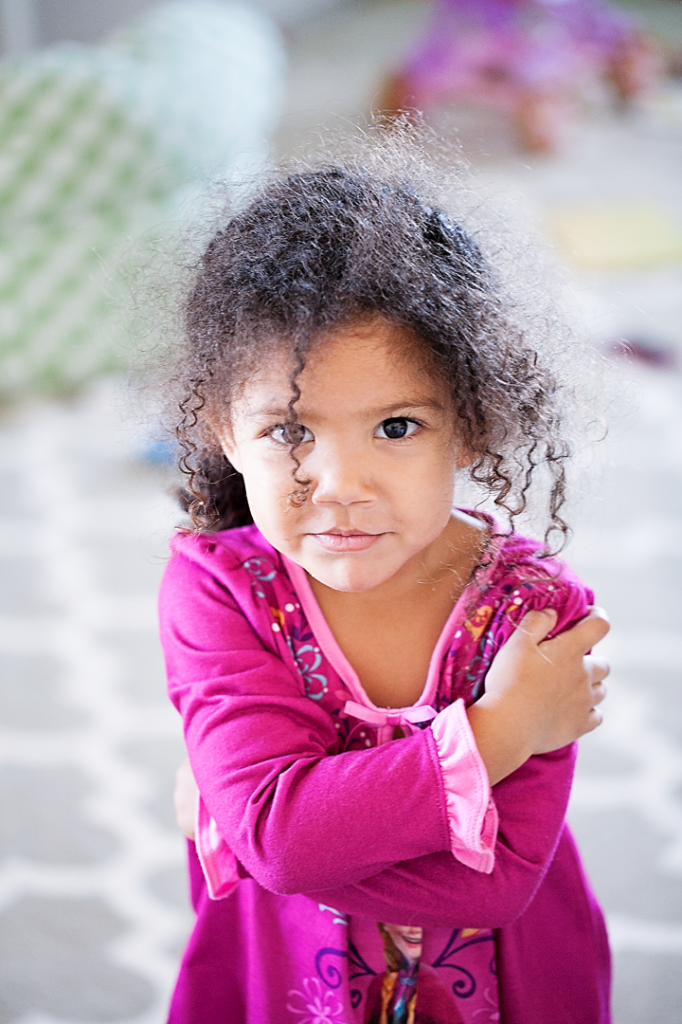 Desperate to convince her to stay in her room I did what any good parent would do. I threatened her.

I leave before she can notice I’m laughing, which would only further encourage her bedtime delaying antics.

But sure enough, just a few minutes later she’s wandering over to me.

She says: What are you doing out of your room? Do you want a spankin now?
She says: Yes. (with a smile)
She says: Ok then, turn around.

Without hesitation she turns her back to me, and I give her a swat on her bottom. —Harder than my petty pats in the past, but nothing to really cry about.

She says (under her breath): Ok. But that didn’t hurt.
She says: Do you want it to hurt?
She says: No.
She says: Then let’s go back to your room. I’ll tuck you in.

Needless to say, I’ve moved on to a different tactic (maybe this was her plan all along). I’m trying a rewards-based sticker chart for incentives to stay in her room at night. So far it has about a 50% success rate.

I haven’t threatened her with a spanking since then, and thankfully, she hasn’t asked for one either.

That was hilarious. Miss J is a smart cookie.

She keeps me on my toes, that’s for sure!

You brought a chuckle to my face at work. Growing up my sister and I were totally different when it came to discipline. I responded to a spank, whereas my sister would be just like Miss J. I’m not sure yet what I’ll do when I have kids, but I know that I’ll just have to pay attention to their temperment and what helps them to think and obey, in order to properly discipline them. Love reading the posts!

EXACTLY! What an excellent point! Kids are so different and will respond differently. I’m anxious to see how little man will respond!

Ok, you may think this is terrible, but we turned around the door knobs on our little kids bedrooms and lock them in at bedtime. Before the adults go to bed we open the door and tuck the children in. If you don’t want to turn door knobs, then buy child proof door knob covers, so they can’t open their door. At night I am tired, I have had fun with my kids all day long, my patience is gone, and I am ready for me time. This eliminates the up-down game, and in my family at least everyone has a happier more restful evening.

I have a friend who does the babyproof knob things, and it worked for her. She also took them off after they fell asleep. My husband isn’t for that right now, and I think we’re trying to see how bad it gets first, but I’m not against that idea. Thanks for the tip Lillie!

Great share I love your daughter wise beyond her years lol 🙂

🙂 Thank you. She’s crazy beyond her years, that’s for sure!

How cute! Threats of any kind nor reward charts/incentives don’t work with my 3 year old. She’s quite determined when she’s puts her mind to anything! Thankfully once she’s down she stays down… at least til 4-5a.m. when she’s comes in our bed. Not looking forward to what happens in a few months when we have a newborn on top of it. Ughhhh!

Haha, well that just means she’ll be an awesome leader some day right? With that strong will! You’ll do great with new baby! I just know it!! So excited for you Quiana!

Cute story! Your kids are adorable I can’t imagine disciplining either one of them. I understand the need for discipline with kids but I cringe at what I doled out to my older children. I was young and thought I was doing what I was supposed to do. Luckily my youngest kid was easy going and all I had to say is that I’m disappointed and she cries. She’s 19 and it still works! Do what works for you.

I’m hoping that’ll soon start to work with my daughter. It does sometimes, and she’s VERY honest, but this bedtime thing seems to be our current battle. I’ll take it though, it could be worse.

Haha oh my that is funny!! At least your not afraid to admit what works and what doesn’t and that spanking your child isn’t a crime!!! It’s unreal the way people see it that now nowadays..a little spanking never hurt any child..in fact it needs to be done more!

Haha, yea. My daughter is lucky she wasn’t born in my generation! (I’m officially an old person).

We are going through the same thing with our 3 yr old. We have a bedtime chart where she would cross everything off, so there was no excuse for coming back out. That worked for awhile. Then it started not to, so we gave her Popsicle sticks. First it was 3, if she came out more than 3 times we’d close (and lock) her door. Then, we went down to 2 times, etc… That worked for a while too. Then we moved her brother into the room with her (in preparation for new baby) and now she comes out for him, i.e. “Brother has to go potty” (he’s only 2), “brother lost his pacifier”, etc… We are at a loss. She usually comes out 6-7 times before falling asleep an hour and a half after we put her to bed. Ugh!

What is it with 3-year-olds not wanting to stay in their bedroom?!

I agree with the child proof knob covers. My son is the same age and once he realizes that he can’t get out he gets right into bed and falls asleep. My almost two year old however will scream and pound the door until he falls asleep blocking the door from opening. After we know they are asleep I open the doors and leave them open all night.

At 5 I told my mom that spankings didn’t hurt and boy was that a mistake. The next thing I knew my pajamas and underwear were off and my mom was getting a belt out of the closet. That was my first naked whipping and “hurt” doesn’t begin to describe it. Unfortunately for me, that was the method of spanking until I got to be about 12 or 13.

OUCH! Oh yes I got my fair share of those too. I also got spankings til about that age. My younger siblings? About half that! Yeesh. Thanks for your comment!

I was aslo spanked with my mom and baby sitters flip flops. How often did your mom spank you with her flip flops?

Hi. Thanks for that cute story! I have to say though that too many parents give little wimpy spanks and conclude that spanking doesn’t work. In order to be a deterrent to misbehavior, a spanking unfortunately does have to sting. A child who puts her little fanny out and asks for a spank already knows it will only be a little love pat… Well. Of course that kind of “spanking” won’t change anything except to maybe convince the child that he/she is the one in charge! When my kids (now teenagers) were younger they knew that “Do you need a spankin’?” meant an actual old fashioned style spankng with pants down, over mommy/daddy’s lap, and a good firm ten or so swats with a hand (daddy) or spanking spoon (mommy). Guess what? The spanking spoon was the same one from my childhood (I actually asked my mom for it when my first entered the terrible two’s!). If you are consistent with spankings they will work wonders for you.