‘Vivo’ Movie Review: What You Need to Know Before You Watch This Netflix Movie

Right from the get go Vivo had us smiling and tapping our feet. It’s a colorful story from Sony Animation Studios that had us laughing, crying, and begging for more. Originally planned for a theatrical release Vivo is going straight to Netflix and I really hope it’s one families don’t overlook especially because out of the animated movies that have come out so far this year, this one is one of the best. Here’s our spoiler-free Vivo Netflix movie review that should help you decide if it’s worth a watch for this week’s family movie night (hint, we think it is!).

It gave us vibes from Soul, Us Again, and a dash of Princess and the Frog. All bound up in a new love story.

I’ve been dying to see a new animated musical, and where Raya and the Last Dragon let me down (where was the soundtrack?!) Vivo picked up the pieces. With an excellent soundtrack by Lin Manuel-Miranda, Vivo has catchy songs we will all be singing along to for years to come. And perhaps my favorite part about it is the variety of musical genres and styles from Latin to Hip Hop, R&B and Pop. The breakout performance from Ynairaly Simo was incredible and I’m sure we will be seeing much more from her in the near future.

It’s a captivating story that hooks you from the start. It’s a family movie that I won’t mind watching with my kids over and over again. Though it didn’t have the emotional and story depth that we saw in Spider-Man Into the Spider Verse (currently on replay in my house yet again). It’s a cute story that’s easy to follow along with. There isn’t one big scary villain (though there is a python appearance that my son loved) but a fun journey with obstacles along the way.

We all had several laugh out loud moments which to me is a big indicator of how much the movie drew us in. The relatability of the mother, the beautiful culture from Havana to Key West to Miami, love and friendship were themes we all enjoyed.

The cast and characters were all a delight. From fluffy fun Vivo to the well-intentioned but frustrating Sand Dollar troop.

There are moments of peril that could be upsetting for little ones. Ty got really upset at one minor part that I wouldn’t have thought was upsetting. No spoilers in this review but shoot me a message if you want to know what that was.

The cast is fantastic and even my oldest daughter right away said “that’s Hamilton!” when Vivo began to sing. It was a little challenging not to see Lin Manuel-Miranda’s face behind some of the dialogue, and especially in some of the songs, it didn’t take away from the story.

My kids had a lot to say after screening this movie and we even watched it again later that day. Here’s their kids review of Vivo.

Vivo Netflix Movie Review by a 11 and 8-year Old

J: I like it because there was a lot of music.

T: I liked it. Because they were in the forest and jungle and I like animals and there were animals in it.

J: I think the funniest part was when he went back into the girls room and didn’t realize.

T: I thought the funniest part was the shusshing iguana.

J: I would probably recommend it as a movie to watch with your family for movie night.

T: Yes, I would recommend it to my friends because I think they would like it.

T: I learned that a python is never that huge.

J: Vivo because he was a cute little monkey and I liked that his voice was Hamilton.

T: The snake, Lutador because I like snakes and I have a pet snake.

T: All my friends.

Do you think it’s for older kids?

J: No. I think Lee Lee might be a little scared.

T: No. I think it might be scary for babies.

How would you rank it compared to other movies?

Q: What was your favorite part?

T: When they were in the bayou

When and Where to Watch

Overall I give Vivo 4 out of 5 stars. You can watch it on Netflix starting Friday August 6th.

Are you going to give Vivo a watch? Let us know what you think!

And do you love watching, rating and reviewing movies with your family? Check out our Family Movie Night Journal. Bringing families together one movie at a time! 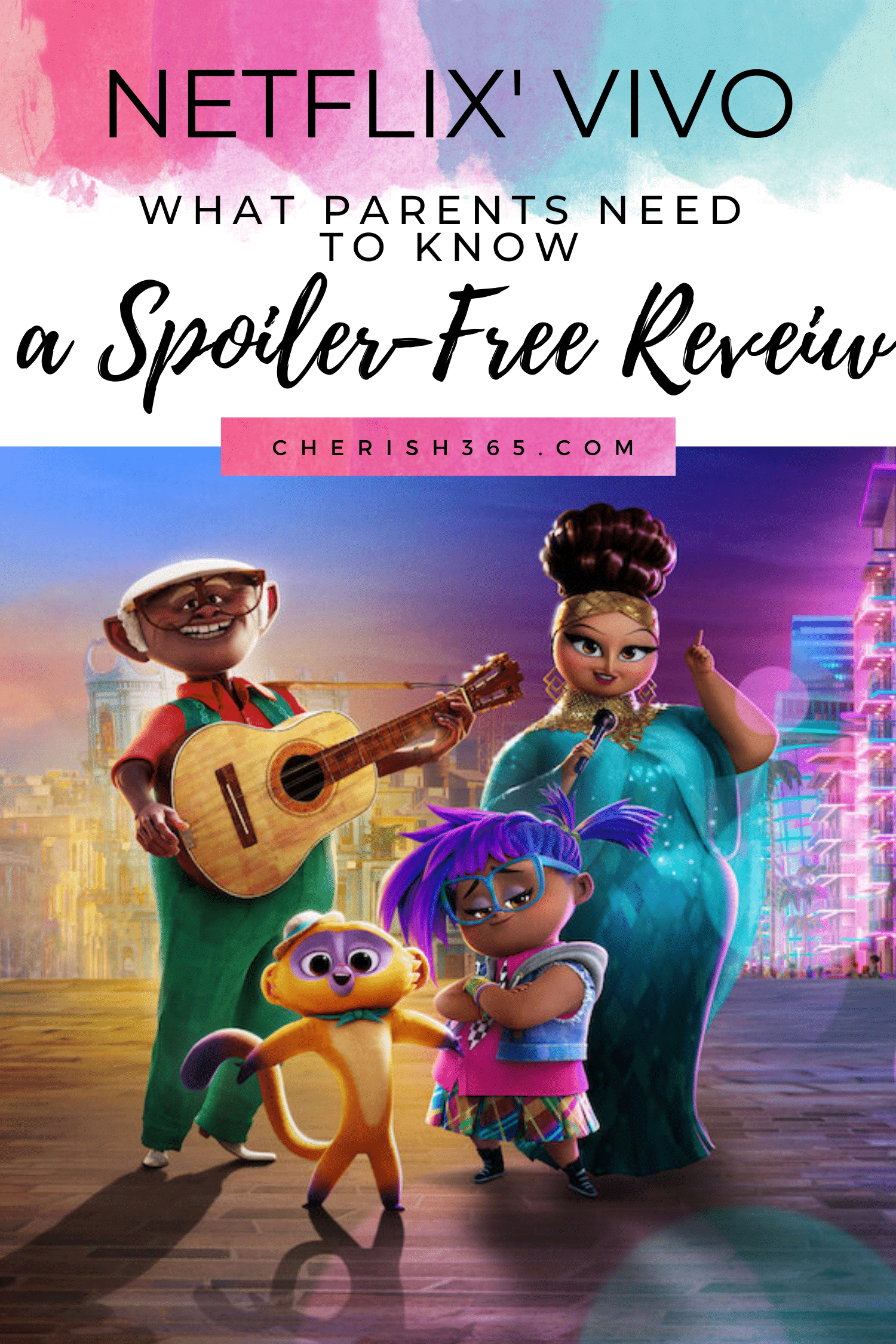 I love animation with music, such as Sing, Frozen, Soul… Thank you for the review! I didn’t know there is a new movie!