When I get into conversations with people about how homeschooling is going so far, inevitably the question about how long I plan to do this comes up.

I’d love to be able to confidently say we are going to do this through middle school, or even high school, but in all honesty I plan to take this year by year and kid by kid.

One challenge I’ve been overcoming is deciding how to school Big T along Lil’ J this first year. He’s only 3, and not in need of any real curriculum, yet he also wants to be involved in what we’re doing (in his own way, sometimes it’s just a matter of interrupting).

He already knows just about all of his capital letters, and he can tell you the difference between a monorail, a freight train and a steam engine. These are things he’s learned on his own just by watching things like YouTube kids, or asking me.

Sunday we pulled into church and he pointed to the top of our chapel and asked “what’s that?”

“That’s a steeple” I told him.

Lately I’ve noticed him pointing to things and asking what they are more than ever. It’s like I’m translating the world for him.

Wanting to help him continue to love exploring the world, but also keep things light (and let’s just be honest–keep him entertained when I’m working with his sister), I’ve been finding tools to help. Here are a few of my favorites so far: 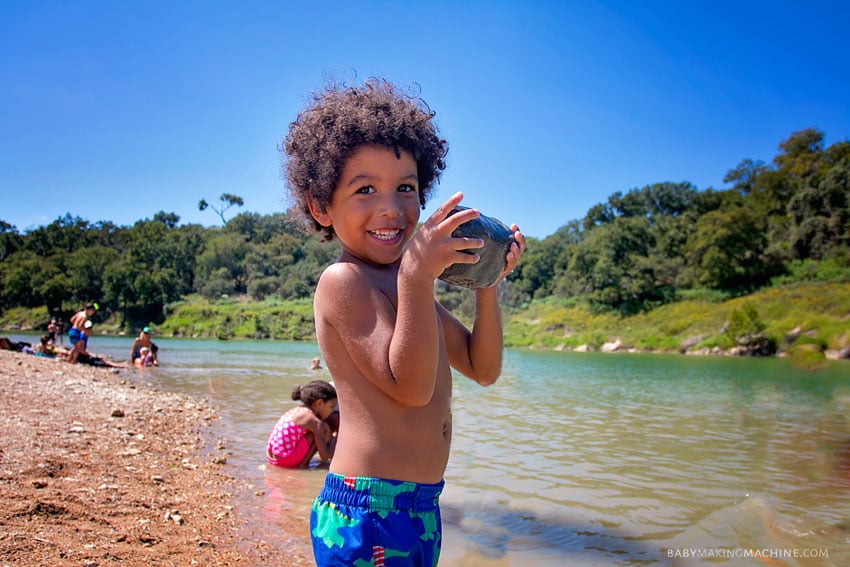 This doesn’t come easy for us because we aren’t naturally the outdoorsy type. But we’re working on it, and he really loves it. Funny enough, he enjoys not just experiencing nature but watching it unfold in documentaries. I know this sounds strange, but there must be something about the soothing music and voices of BBC documentaries. His favorite right now are about whales, but he also likes videos about dinosaurs. He loves watching them eat and jump out of the water and he tends to ask me a lot of questions about what is what. Maybe these will be his new train obsession. I typically try not to turn this on in the morning when screens are typically off, but in the afternoons if I’m reading aloud to Lil’ J, or we just want to sit and have a breather, these are awesome. 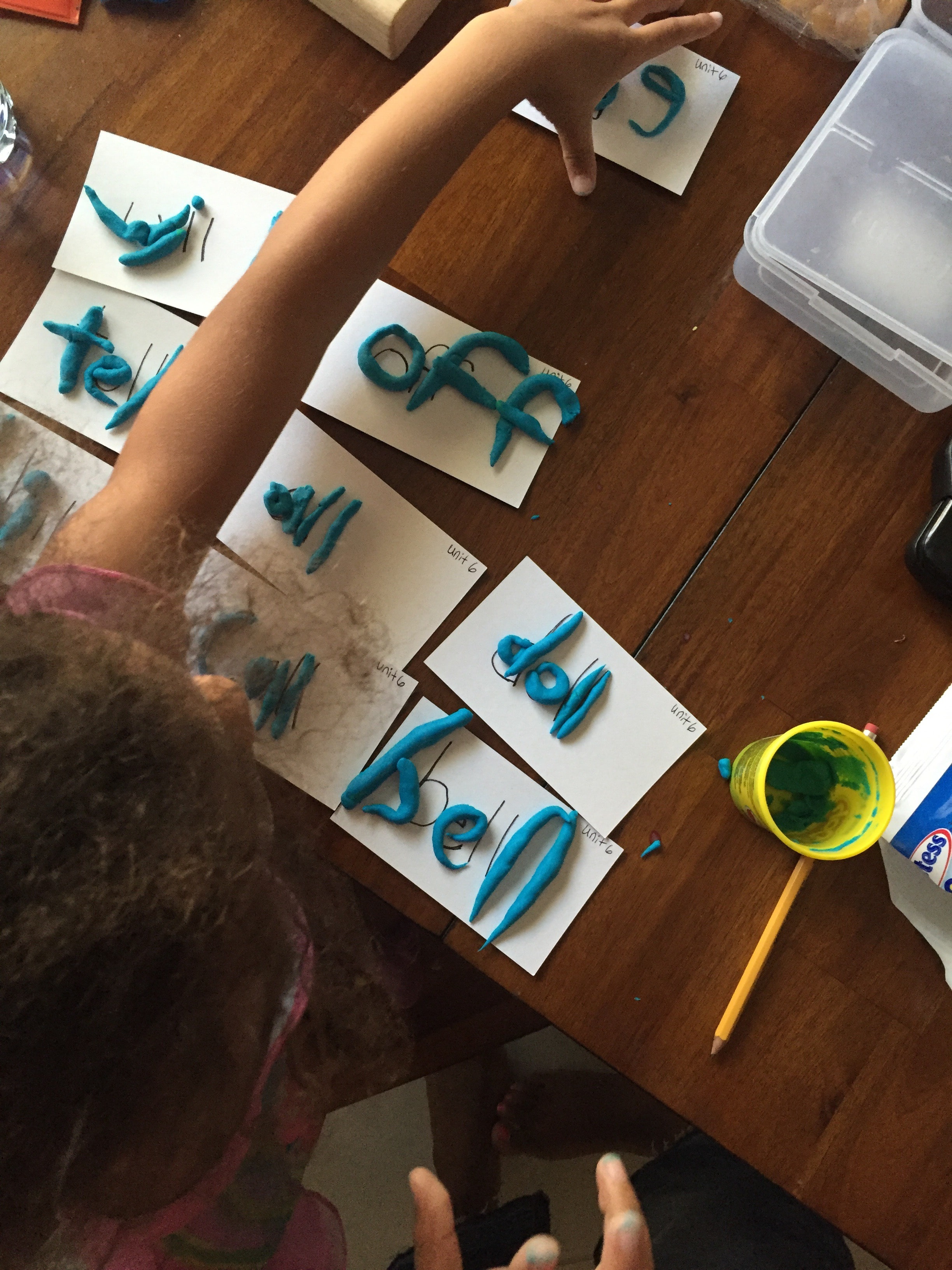 Until recently he didn’t like to touch the stuff. He doesn’t like getting his hands dirty. But we gave it another try recently and as soon as he realized it wouldn’t stick to his hands, he started to love it. He asks me to make different shapes, and we talk about colors, and make letters. There’s lot of learning to be had with some soft moldable clay. 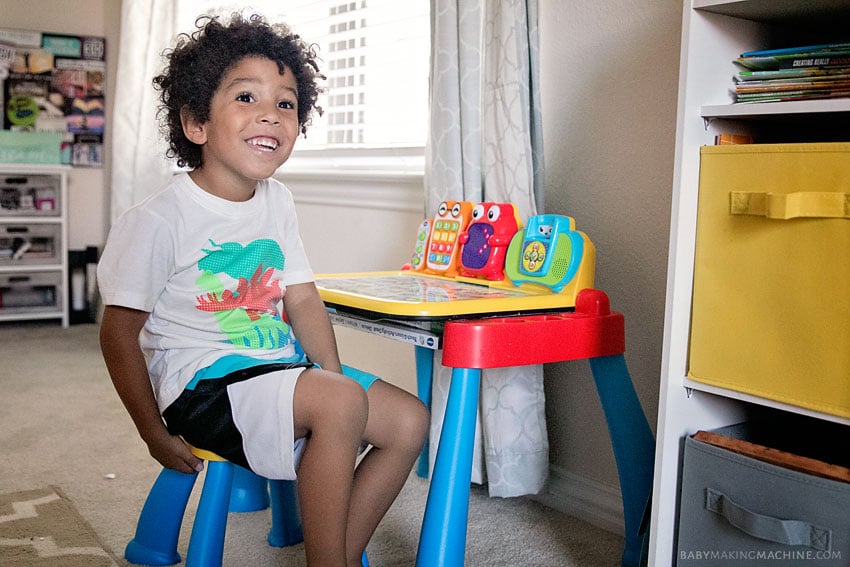 He loves this desk and calls it his “homeschool” but really it’s just a fun toy he uses to explore. He touches the buttons on the desk and it tells him what letters and shapes he selected, but with a sneaky flip of a switch I can turn the desk into search and find mode, where it’ll ask him to press something and he has to find it. Only thing is with his attention span he doesn’t always wait to hear what it’s asking him to find, so when Lil’ J is working independently he and I will play our own search and find games on the desk, and he loves it. It came with 5 activity pages to swap out and play with, and VTech sent us a few more expansion packs that each have another 8 pages from shapes to body parts and more. So it’ll be a while before he’s been through them all. Then, when we flip the top of the desk up it reveals a chalkboard and he and his sister like to draw on it together. It also works as an art stand when we use the clip to hold paper to it. 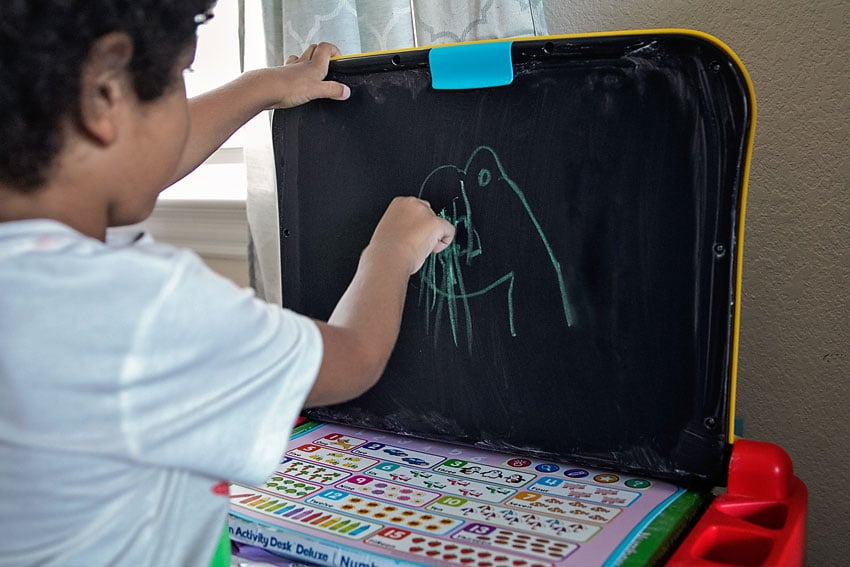 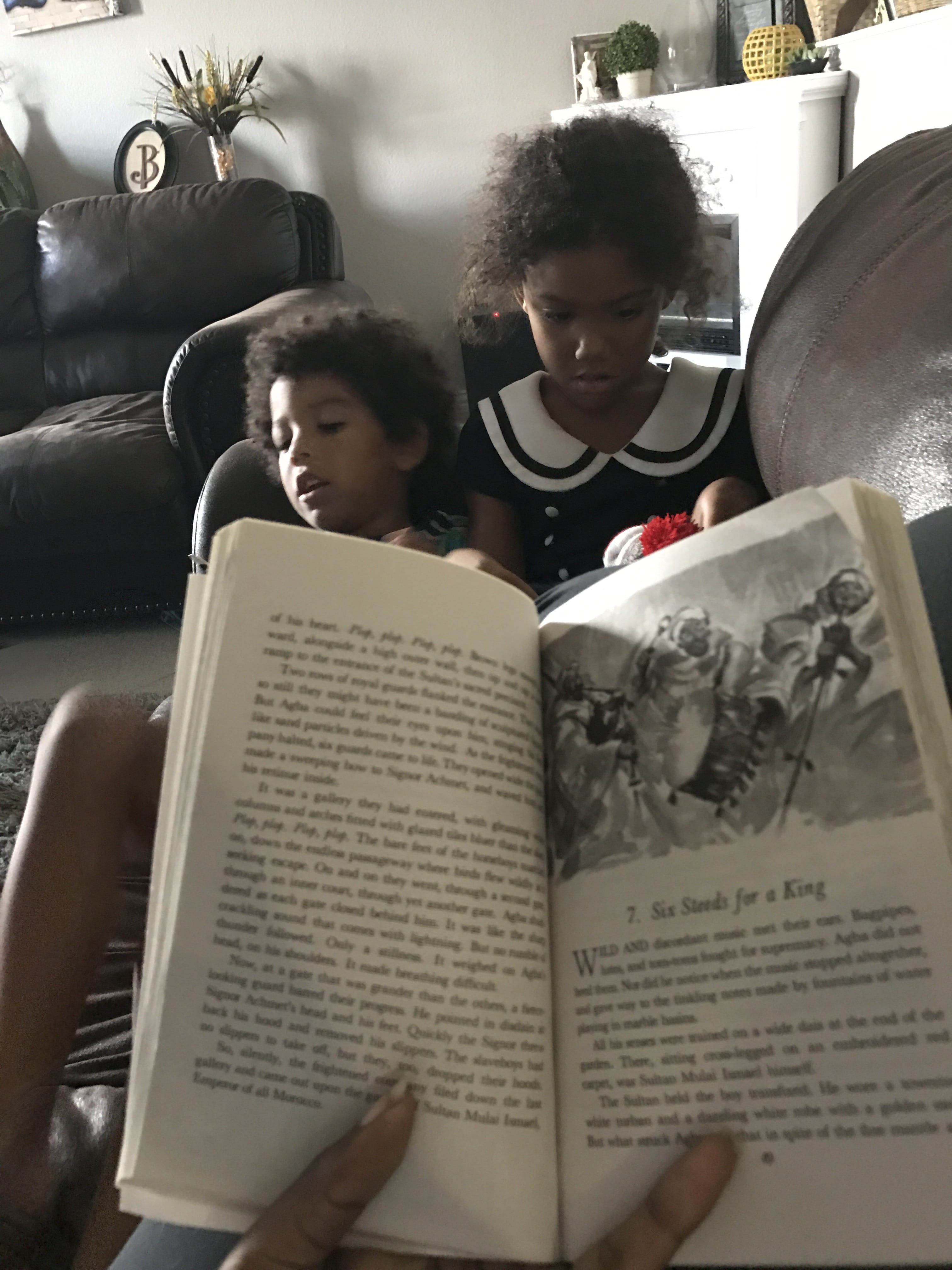 For so long Lil’ J has been in charge of choosing the books we read, and now with homeschooling I’m doing a lot of reading aloud to her. She loves it, but he can take it or leave it. Lately I’m trying to do a better job about asking what HE wants me to read to him, and being patient and obliging. Sometimes it’s a short story, other times it’s a dinosaur encyclopedia-type book. But I notice when I’m sitting down with him and reading what he picks, he’s a lot more cooperative and happy.

The way to this kids’ heart seems to be through music. The toy I mentioned above has quite a bit, which he likes, and so do little kids YouTube videos. I need to shout out to the creators of Bob the Train cause that has provided hours of free entertainment over my kids’ lives, and the songs are catchy enough to help him learn numbers, letter sounds, and beyond. I wonder if they have podcast versions…

Overall I’m trying to follow his lead, not force him to sit down and learn but let him learn through play and asking questions while exploring the world. Then taking whatever he’s showing an interest in and providing him with tools to expand upon his knowledge.

I’m excited to see this process evolve as he gets bigger and see the things he’s drawn to. I don’t know if unschooling will be his way of learning forever, but right now, it’s pretty sweet. 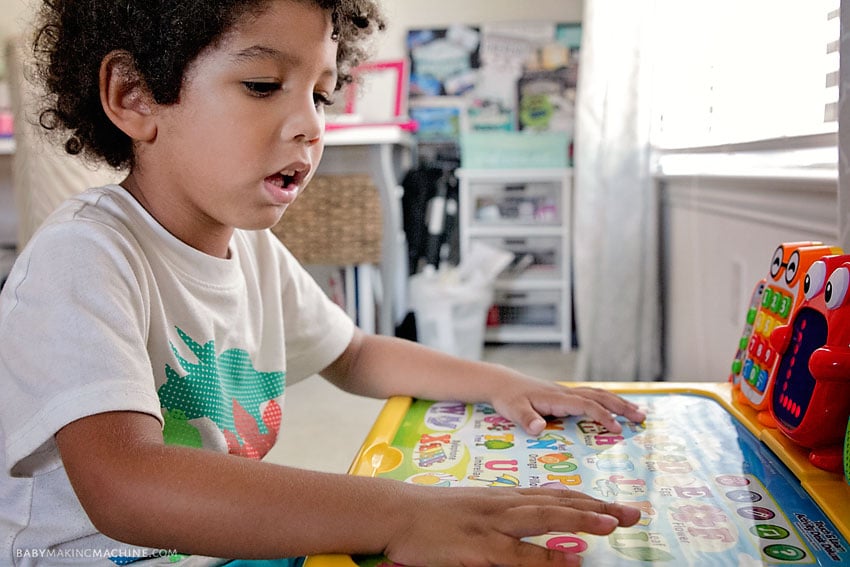 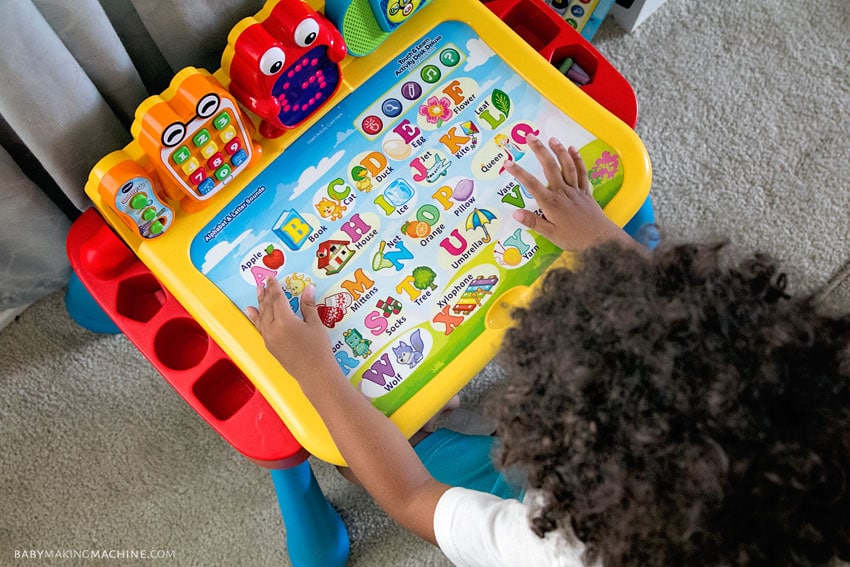 *I love finding fun ways for my children to learn through play. That’s why I partnered with VTech on this post. A big thank-you for sending us the fun VTech Touch and Learn Activity Desk and for sponsoring this post.

Hey Jennifer love your new journey best of luck! I am not sure if I shared this info with you before but have you heard of Akilah Richards? She is an awesome advocate for UnSchooling. Maybe some of her experience could add to what you already have going? You can google her and see, let me know your thoughts 🙂 xo

Thanks so much for the well wishes Mari!

I don’t think I’ve heard of Akilah Richards… Though it sounds super familiar. I’m definitely going to look that up this weekend. Thank you!

The process of unschooling is really interesting! I like that it’s more about the process versus the content. I’d love to hear more about your journey. I’ve considered homeschooling my daughter but she’s not interested. She’s an only-child and really craves the social interaction from follow classmates.

How old is your little girl Tee? This year has been a fun experiment for us, so far so good. We usually go out with groups a few times a week so that helps with the social aspect. But it’s definitely not to the same extent as traditional schools. I loved all that social stuff growing up.

I am happy for you that un schooling is helping. Some of my friends use the at home school idea and so far so good. The only issue I hear from my friends is that they need a break. I am also glad your little one is getting the social part out of it . I think healthy field trips in groups with his age group is important for healthy development.

I think one of the most important ways to ‘unschool’ our children is to take them outside!! It is so important for them to be in nature and to appreciate the small, simple things in life!

I love that VTECH desk! My three year old would really benefit from something like that. I also like the use of dough for letter identification and spelling.

I don’t have kids yet but if I do, I’ve been seriously thinking of home schooling. Anyhow, your experience really looks great and it makes me even want the idea even more. Thanks for sharing!