I purposely try not to make it a resolution of mine to “get in shape” or “hit the gym” because let’s face it, I’m not going to last a week. I hate running, I don’t like exercising, or much physical exertion for that matter. But with my rising age, I’m noticing keeping off the pounds isn’t as simple as it once was. That is… My metabolism is slowing down. My thighs are thicker, and I’m a little fascinated with jiggling and pinching the extra plumpness in my midsection.

I can’t complain, it’s my fault. I probably enjoy a little too much Nutella after the kids are in bed, and again with the hating the fitness stuff. Nevertheless, I am starting to make an attempt to get physical. Not everyday… Let’s not get crazy. But more than never.

We have a membership to the YMCA and I have only been a couple times since my son was born nine months ago. He totally flipped out the last time I took him, when he was six months old. I thought he’d be fine playing with baby toys and random stranger gym daycare people, but they came and got me exactly 15 minutes after I dropped him off. That’s how long they give kids to calm down before they have to go back with their parents. 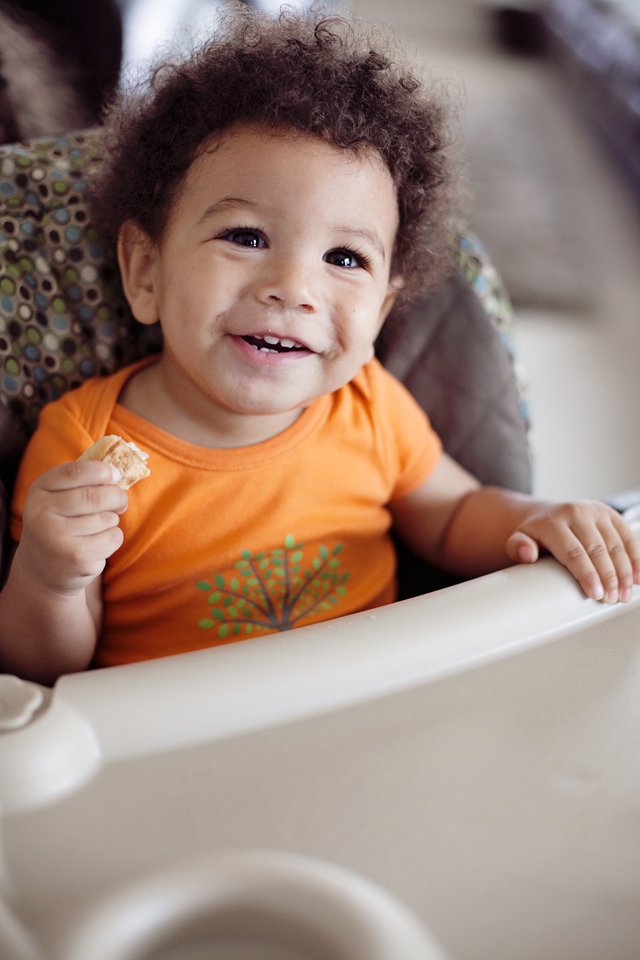 My kid? No way. He hardly cries, and if you’re holding him, he’s definitely happy. I was half-expecting to walk in and see another little brown boy crying, and chuckle about a parental mix-up, but sure enough, it was my little guy. And as soon as he was back in my arms he calmed down.

So I’ve got a kid with separation anxiety. Super. I thought. But it actually wasn’t so bad… I had an excuse to avoid the gym for a few more months.

Fast-forward to now. I noticed he doesn’t completely wig out when someone who’s not me holds him, so I decided to give it another shot. We went to the gym a couple days ago and I totally expected to get called out from my intense elliptical workout. 15 minutes in I was shocked and somewhat disappointed that I had to keep going.

I peeked in on him and he was doing fine. I completed my workout and am kinda hoping we’re in the clear. Mostly because I really want to go to the classes, like zumba, and it’s not fun to get pulled out of those. I don’t mind exercising so much when it’s fun. Or in my bedroom. Wait, what?

Now to get a handle on my obsessive late night snacking and french fry eating. Actually I am proud to say I haven’t eaten a french fry in over a week, which has got to be some kind of record for me. I’m hoping to go an entire month without indulging, but I’m not making any promises. I definitely expect to lose at least 10 pounds from my efforts. #kiddingnotkidding

What can I say? My weakness is fast food. And Nutella. Now that I have internet again (did I fail to shout this from the rooftops?) I am all pumped up and ready to meal plan and get my daughter to stop being the pickiest-eating child I’ve ever met. I’m actually embarrassed by her pickiness. We’ve gotta put a stop to that. 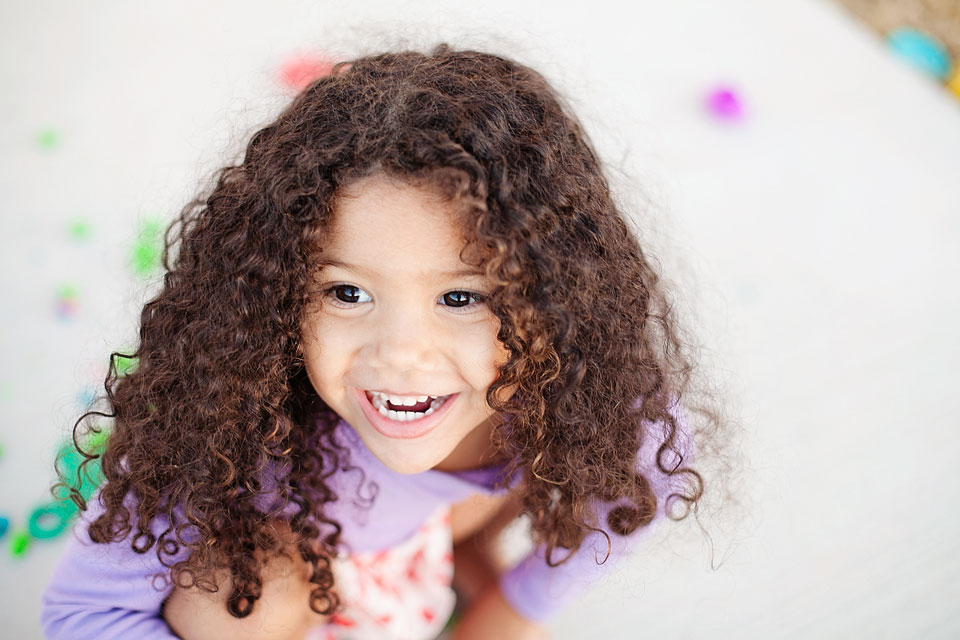 I’m starting with branching out with our breakfast and lunch menus. They seem to be the simplest meals to make so I’m starting there. I’m going to try to make some of those tasty ham and cream cheese pinwheel tortilla things with her this week. It’s something I’m sure she’ll love but refuse to try. We’re also busting out the smoothie/juice blender again to jam in those secret vegetables.

For dinner I’m still working on the Boston Market 35 meals in 35 days challenge. Each delicious meal is less than 550 calories. Problem is, when I’m ordering for my whole family, I can’t help but scarf down a couple at a time… Defeating the whole low-calorie idea.

Let me just give you a little glimpse at the type of dinner you can get for under $10 and 550 calories. 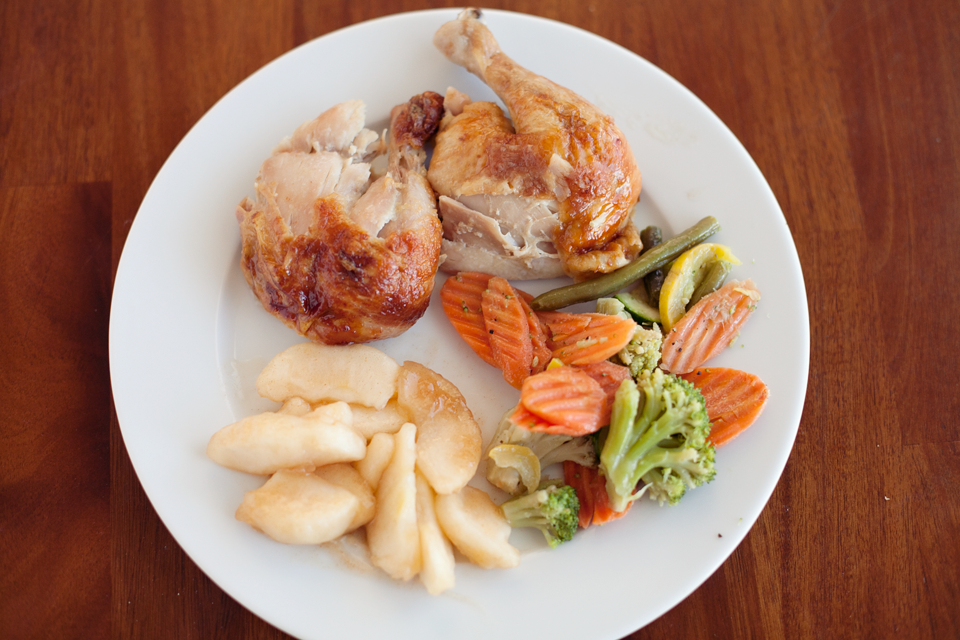 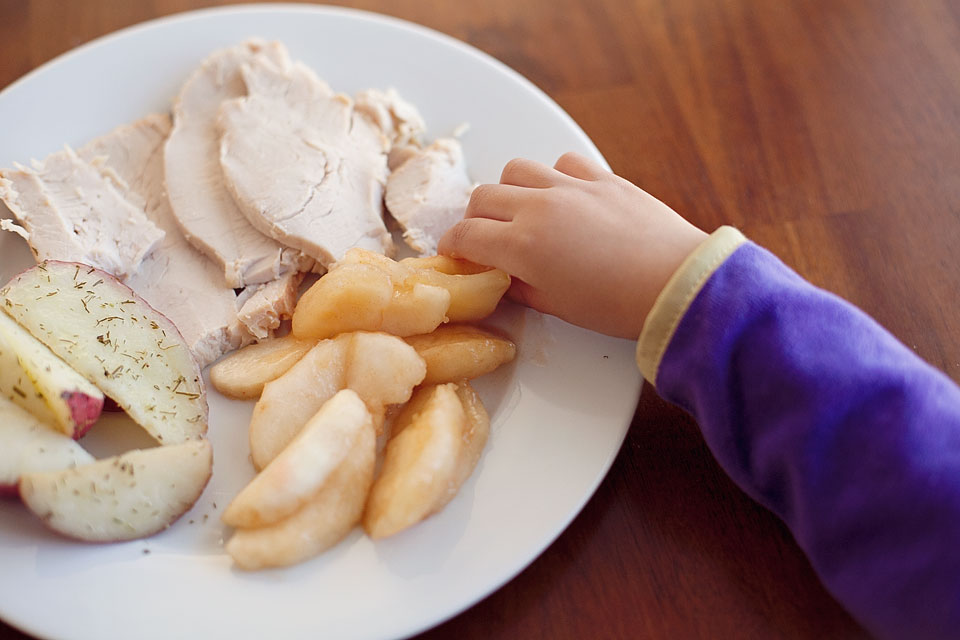 Delicious right? Even my picky eater was into the apples.

The never-frozen chicken that you can watch cooking in the restaurant, fresh vegetables, and the potatoes… Oh that potatoes.

Anyway, I want to do better with the healthy living stuff. I can do better. And there’s no better motivation than my sweet kids who I want to be there for a long long time.

If you have any tips for persuading picky eaters, or staying motivated to hit the gym, share away!

*Boston Market is sponsoring my participation in the 35 ways to eat right campaign. I get free meals and then some. All comments pertaining to the food and other opinions are my own. I wouldn’t lie about good food anyway.

There are a lot of “I” statements here in this posting…you seem to be really all about you.And of course your child has “anxiety separation” he is a baby, what do YOU expect??? You seem like a self obsessed woman, and you should focus on the Lord and read your Bible more often. I bet you don’t even know the Ten Commandments by heart.

I’m glad I read the other comments first or this would have really upset me.

The Ten Commandments? What’s that?

oooh i am hooked and loveee your website, and ur nunus are grown and forever cute. i am 26weeks pregnant,24yrs and my first baba, patienlty waiting for the home stretch, i love ur blog so much, i am from South Africa btw….keep em coming mama 🙂

hi there, my fellow countrywoman! I’m in California but can’t wait to move my family home later this year! Fingers crossed. 😀

I’ve also been tryna get fit and eat healthier meals. I have a love hate relationship with exercise, so lets hope I can hang in there till it’s a habit. Good luck and keep us posted :). And can those bubba’s get any cuter???? Cuteness over load :D.

Seems like Jolene Andersen needs to get some sleep instead of late night creeping with all the crazy negativity. Really? I think you’re the opposite of ‘self obsessed’ clearly she hasnt read any of your other posts. ANYWAYS i love nutella and hate working out lol so I know the struggle. And I also have a picky eater too that isnt interested in eating anything that isnt a breakfast food item.

Meli I was just realizing this about my daughter. We have a looooong list of breakfast foods, fruit, and carrots. I made a green smoothie yesterday that was delicious but she was unamused by the green color. Note-to-self… Get a non-see-through cup!

Thanks for getting to Jolene Sourpuss before I could. Obviously I’m not self-obsessed or I woulda been at the gym lookin much sexier by now. Even though I tried to show my best angles in the 10 selfies I included in this post.

Please, ignore Jolene there, she seems to have woken up on the crazy angry side of her bed. Obviously the post has a lot of I’s – it’s about YOUR goals to get healthy.

I hate exercising too. And eating right… though my weakness would be Sonic’s Chili Cheese tots which are probably way worse than innocent little yummy fries. I hope you keep it up!

As moms I think it’s in our nature to often forget about ourselves cause of our little ones who need us so much.

Thanks for the encouragement. Now see, I gave up fries but I didn’t say anything about chili cheese tots!

I too have been working on getting healthy this past year. I just started my blog about that and various other things. I too have a 2 year old who went through a crazy picky stage and just this week is hitting a growth spurt and eating everything on her plate, finally!!! Now I just have to live through the whining! LOL.
I love to see your daughters hair, my daughters are biracial as well ( I have an older son who is not) and they girls each have different textured hair. I am learning to manage it and teach them to love what they have and I love seeing other momma’s do the same!!!
I love reading, have been for years now. since before miss J made her grand entrance. now that I have my own blog, I am commenting, haha!!!
Keep on and perhaps we could make up some flash cards to help us learn those ten commandments? Bwahahaaha

Yes. I’ve made no resolutions this year either but have made a commitment to take care of myself. And I’m trying out a schedule for the first time in a while. It’s doing us all some good. I think. I’m noticing that I’m more likely to homecook meals or take time to prep for crafts and science projects. We’re having fun!

Greetings from Carolina! I’m bored to death at work
so I decided to check out your blog on my iphone during lunch break.

I enjoy the information you provide here and can’t wait to take a look when I get
home. I’m shocked at how quick your blog loaded on my cell phone ..