Ugh! So We’re Doing the Effin Elf Thing: Here’s Why…

Why? Why why WHY?

I’ve been asking that question for years when I see people post pictures on Facebook of a creepy-looking elf getting into some mischief before their kids wake up.

I know some kids dig it. I knew my daughter probably would. But I didn’t know why people would go through so much effort night after night. It just seems like an A+ kind of mom thing to me and I’m over here hovering around C- status.

So I resisted. I’m so not “that mom.” I’m into magic and fun and Christmas spirit, but not more work. It’s already a busy time of year with parties and cards and gifts and fourth quarter. I aint got time for that.

The last two years my daughter has asked if we’d have an elf visit our house because there’s one at Granny’s house. My 11-year-old sister has an elf named Snow. And she told my daughter all about her and how she goes away at night to talk to Santa then comes back to another spot the next morning.

I’m not sure what about this made it so exciting but she would not stop talking about that dang elf.

After Christmas last year my mom went behind my back and bought an elf for my kids. She “surprised” us with her one afternoon and I quickly whisked it away and said maybe she’d come out next Christmas, knowing full well that thing was not coming back out.

Fast forward a year, to this week. My mom gave my kids a DVD with the story behind the elf. She said after watching it maybe she’d help her get an elf. I pulled my mom aside and reminded her she already gave us one last year and that I was hiding it intentionally.

“Oh!” My mom stammered. “Well good thing you told me I was about to order another, you’re going to have a whole clan soon!”

“No, no, that’s ok!” I told her. My other sister Lauren sneered and told my daughter “Yes, you’ll get an elf don’t worry!”

Look, are you going to come to my house and move this thing every night? Of course not! So back off!

I did allow the DVD to happen. It’s a movie version of the story I think. I didn’t really pay attention much but I saw something about the elf getting sick cause a boy touched him and he lost his magic, and something about them bringing Christmas cheer.

Well, all afternoon Lil’ J was going on and on about wanting an elf, wishing for an Elf, she wrote Santa a perfectly penned letter asking for an elf. And before bed time said a prayer and made a wish by the Christmas tree for an elf. Guilt was starting to burrow into my soul.

“Maybe if you sleep in your room all night, we’ll go to the store and get an elf,” I told her as I tucked her into bed.

Now, I’m not into eerie elves but I am into magic, and making that last for my kids.

So while my daughter was sleeping I took the dang elf down, still in the box, and set it under the tree.

She didn’t wake up and ask to go into my room before I went to bed, so I thought she’d stay in her room through the night. She did wind up coming in around 5am, but that was better than usual, and I wasn’t about to get up and go put the thing away so I let it slide. (Plus technically I didn’t “BUY” it like I said we would).

The next morning she popped up and ran to the front door–Right past the Christmas tree, and looked to see if there was an elf on our doorstep.

The doorstep? Who leaves an elf on the doorstep? I guess I missed that part of the movie. And she completely missed the elf under the tree.

“I guess my wish didn’t come true” she said deflated.

“Well, maybe if you stay in your room tonight we’ll go get one,” I sneakily encouraged.

Meanwhile, I ran to my husband and told him to take the elf from under the tree and put it on the front doorstep while we were working on homeschool.

He obliged and a few hours later before we left for piano I asked Lil’ J to check and see if Daddy’s car was in the driveway.

She opened the door and gasped.

She grabbed the box and giggled and brought it inside, then remembered she forgot to check to the car–It wasn’t in the driveway, but in the garage.

“Is it a girl? We have to name her! I can’t believe my wish came true!”

All this–This pure child excitement made it worth it.

Yes, I’ll probably ruin the elf thing and subsequently Christmas in the process, but if I can just savor the joy she had on this morning, I think I’ll be ok. 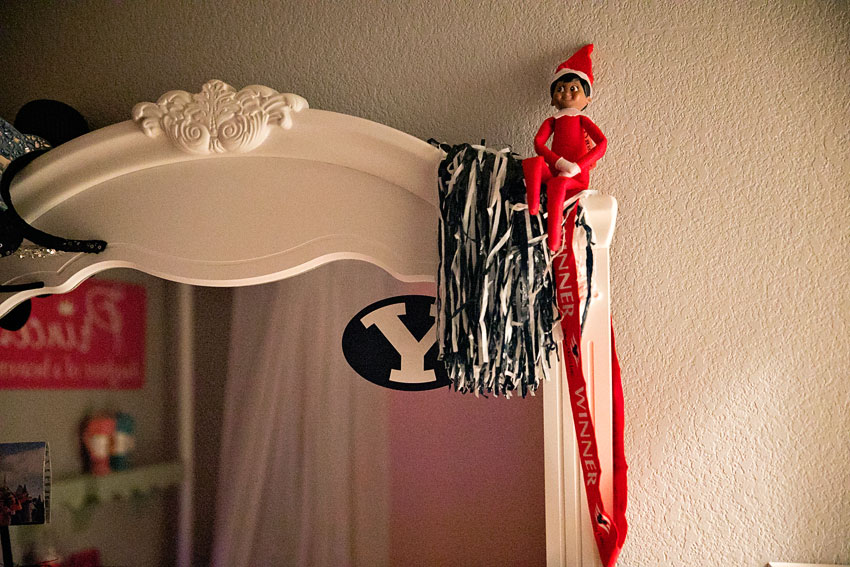 I already made a whoopsie tonight as I was trying to take the elf out of the box and take this one and only picture to show you–she woke up!

So I had to play it off like I was just checking on her. She went to the bathroom and when she went back in her room she noticed the opened and empty elf box and said to me in a know-it-all tone “See! I told you she’d leave at night to go to the North Pole! She’ll come back in the morning!”

Ok then… She told me.

A few things… She named her elf Jingle (she didn’t like any of my suggestions). And she wished for her to hide in high places so that her brother doesn’t touch her. I don’t think my daughter knows about any mischievous/ clever ways that elf hide, so Jingle is going to be a very very basic and chill elf.

So I need your help. No, I’m not looking on Pinterest for ideas, unless you have a master list of lazy elf ideas and by that I mean no other props other than the elf itself and whatever static household item it’s sitting on/dangling from. I’ll take those.

I’m also not sure we’re doing the “Elf is making sure you’re being a good girl” thing. I mean, if she takes it that way fine but I’m not going to hold that over her. I think she’s most excited to hunt for the elf in the morning. She said that a few times… “She’s going to hide and we have to find her.” Which I take to mean she may be in hidden places? Like an Easter egg?

Do you dress your elf? My mom’s/sister’s has a skirt, but she said that it was crazy expensive so maybe–Possibly, we’ll sew a skirt for Jingle and leave it next to her for her to wear? Oh my gosh, LISTEN TO ME!

At the end of the year does it go back in a box or just “say goodbye” until next year? If the box goes away I need to remember to be sneaky about bringing the thing out next year–Lawd, must there be a next year?

Also, we are exempt during vacations right? Cause I don’t think I’ll manage keeping it up on the road.

Ok, I think that’s all of my questions. Yes, I’m a hypocrite, I’ve given in to the elf. We are those people. I am that mom.

But it’s all for her.

Do you have an elf in your house? How serious are you in your elf antics?

Tags: christmas, elf on the shelf

Oh no! You got an elf!! That’s just terrible. I do not and will not do the elf thing. I refuse. Nope nope nope.

When i was growing up in the 60s and 70s we had 2 elves that my mom got off bottles of dish soap. My brother inherited them and used them for his daughters and (hopefully) this year I’ll be using them for my granddaughter.
I have such great memories of them from my childhood.
And yes, I’m probably going to attempt to recreate activities each night with them, at least until the elves ( Nana) need a break

Wow! I didn’t realize how far back this history of elves went!

My kids started asking me about elves and I said it’s something that parents do to get their naughty kids to behave. And since they’re not naughty they don’t get an elf.

There is no way I’m making my job even harder.

Now see, why didn’t I come up with something clever like that?

the joy it brings your children is always worth it 🙂

We have a lazy elf at our house, too. Occasionally she will bring things to my kids, like if I get them Christmas coloring books or something, I will prop them up next to the elf for them to find. They ask to leave syrup and chocolate chips out for her to eat sometimes. They also will leave their lists for Santa next to her for her to take to the North Pole. She never, ever gets up to any of the mischief that Pinterest elves do! Mostly they love hunting for her in the mornings. We’ve only done it for two years now. On Christmas Eve they all get to hug her and tell her goodbye until next year and I box her up and hide her in the back of my closet. If we forget to move her we tell them she was being sneaky and hid in the same spot as the night before so they wouldn’t think to look there. I was an elf hater, too, for a long time, but my kids have so much fun with it I’m glad we ended up getting one.

I hate the elf too! I was definitely feeling the mommy guilt to get in on the fun though. So, we got a Christmas angel that incorporates the #LightTheWorld campaign. Our Angel is hidden every day and has their kindness/service assignment for the day. Maybe you can do that with the elf instead?

Oh my goodness, I am cracking up…this is so good! My daughter is only 16 months, so I think we have a couple more years. Thanks for making my night.

I ALMOST bought an elf the other day at Target because my daughter learned about it at school. She was enthralled with the idea, and I thought it’d be fun. But I couldn’t get over the idea that they can see the elves on the shelf at the store! How does that not ruin the magic?

Maybe in a few years when my daughter figures things out (she’s almost 9, so soon?), she can be in charge of that magic for her brothers. Not that it answers the store question, but I bet she’d be a better elf caretaker than I would be…

It’s always the Lee Lee show at our house. She g

Are your summer plans looking different this year?

“They define the kids by what they’re good at.

Once a week we take turns choosing what to watch f

My girls and our crown of curls 👑. You may like