What I Learned After Straightening My Daughter’s Curly Hair

After years of wondering and putting it off I finally agreed to let my daughter get her hair straightened. Don’t freak out, we didn’t do anything permanent. Just a blowout and flat iron appointment.

We did give it a try about a year and a half ago while we were on vacation. But without the proper tools it was pretty much a disaster and ended rather quickly.

With my daughter’s dance recital ahead of us I decided she could get her hair straightened to help make it slick back into the ballerina bun, and make it easier to go from bun to pony to side part in her different dances.

We went to a salon and I got a press at the same time–My first in 3 years! To do a length check and so we could go through the experience together. 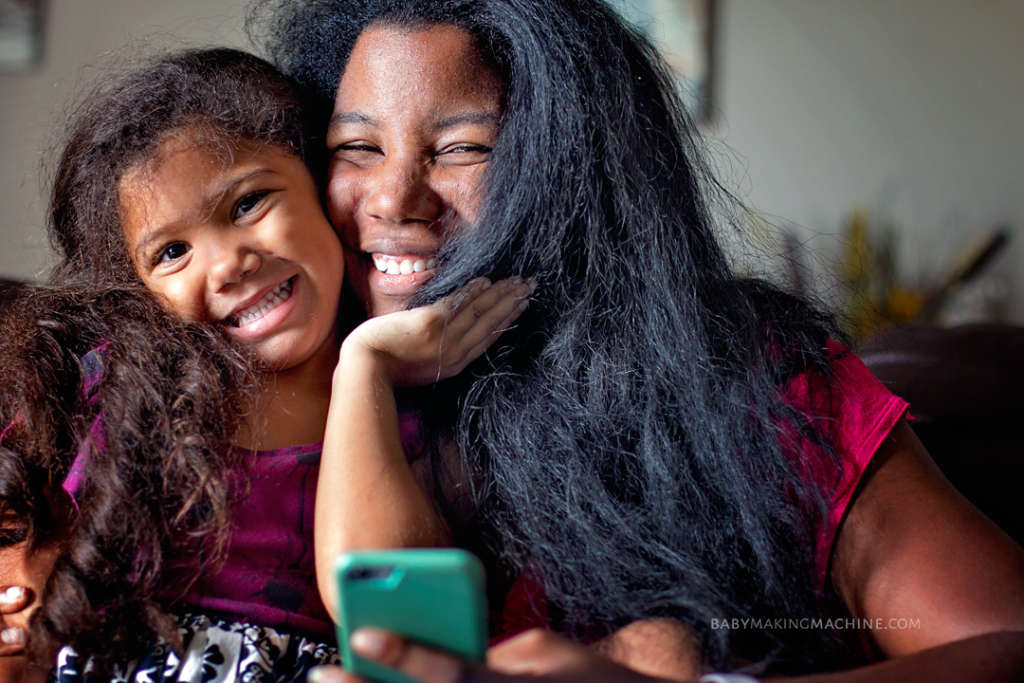 1. It hasn’t gotten much easier since I was a kid

I remember those trips to the salon that took what felt like all day. All the tugging and combing and heat and waiting. You’d think we’d come up with a faster, easier process after a couple decades but it seemed very similar to before. Lil’ J was willing to stick it out for the result, but she’s just as tender-headed as her mama and it wasn’t fun.

2. I will probably do it myself from now on.

Because of #1, I most likely will take over any straightening in the future for her hair, and possibly my own hair too when I want to occasionally give it a go. I just ordered a blow drier and I’ll probably stick to that versus a flat iron for my daughter’s hair. I was shocked to see how much heat the stylist was putting on her locks. When I realized she had the heat all the way up on the flat iron I asked her to turn it down. Don’t want to damage her pretty baby locks. 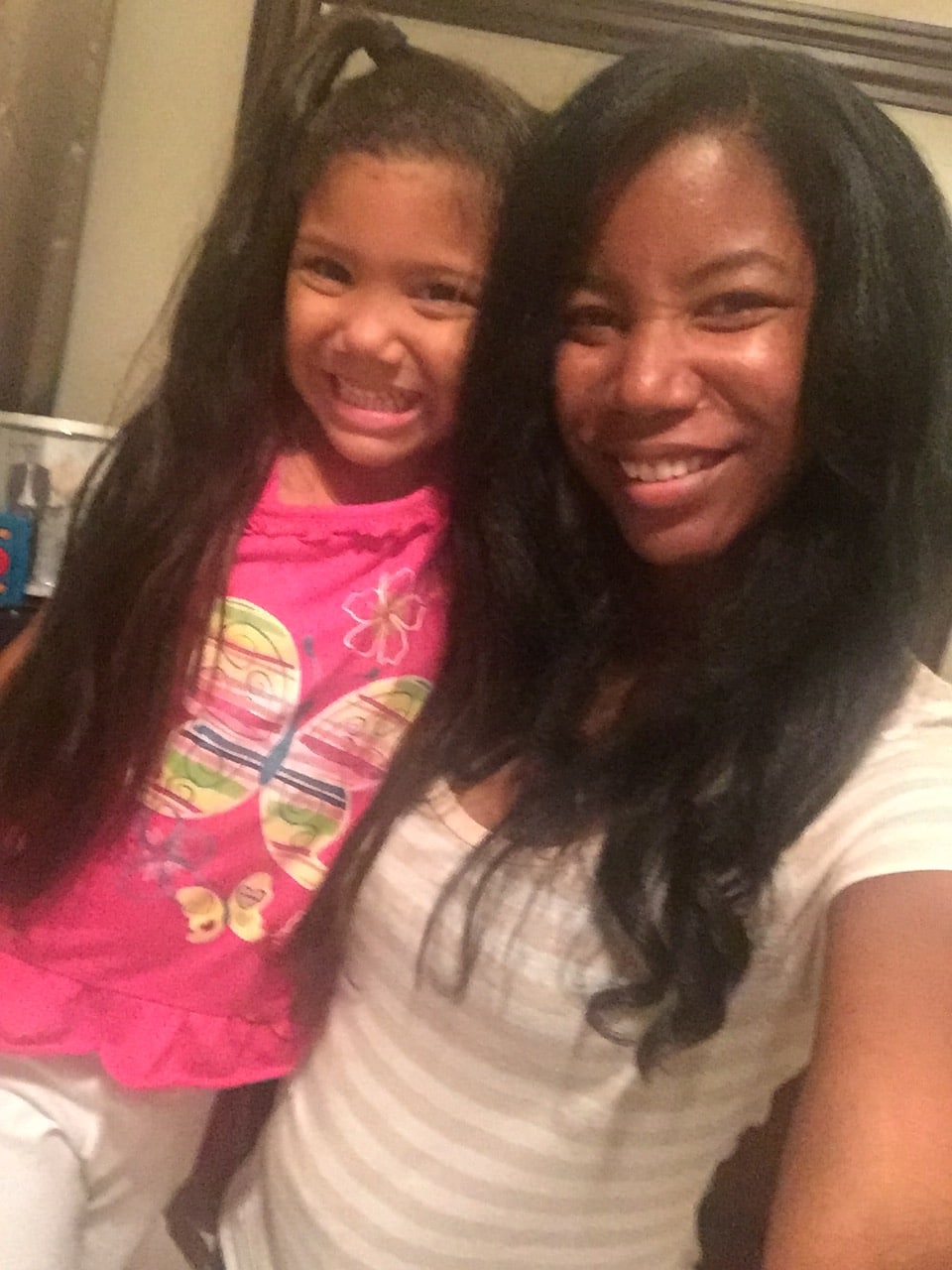 3. My husband is totally #teamcurly

Without any coaching my sweet husband was nice about my daughter’s new look, but reminded her daily that he thought her curly hair was prettier. So often kids get complimented on the opposite and I know his words stuck with her.

4. It’s ok to love your hair straight too

My daughter was in L O V E with her hair styled straight. I mean any glimpse she got of her reflection she was staring in it. She was whipping her hair back and forth. She was brushing it. She was telling strangers about it. She was all about it. And I let her have her moment. Yes, I love her curls and I want her to embrace them too, but it’s ok for her to love the versatility in her hair styles as well. After all, all it takes it a little water to reverse the process.

I’m also enjoying the change of pace with my temporarily straight locks.

Right after she saw the results of her hair straightening she told me she never wanted to go swimming again. She made sure to have an umbrella or some kind of cover over her head any time we were out and there was a chance of rain. But after about a week and a half, she decided having fun in the pool was way more important than having straight hair and she’s been swimming just about every day since. 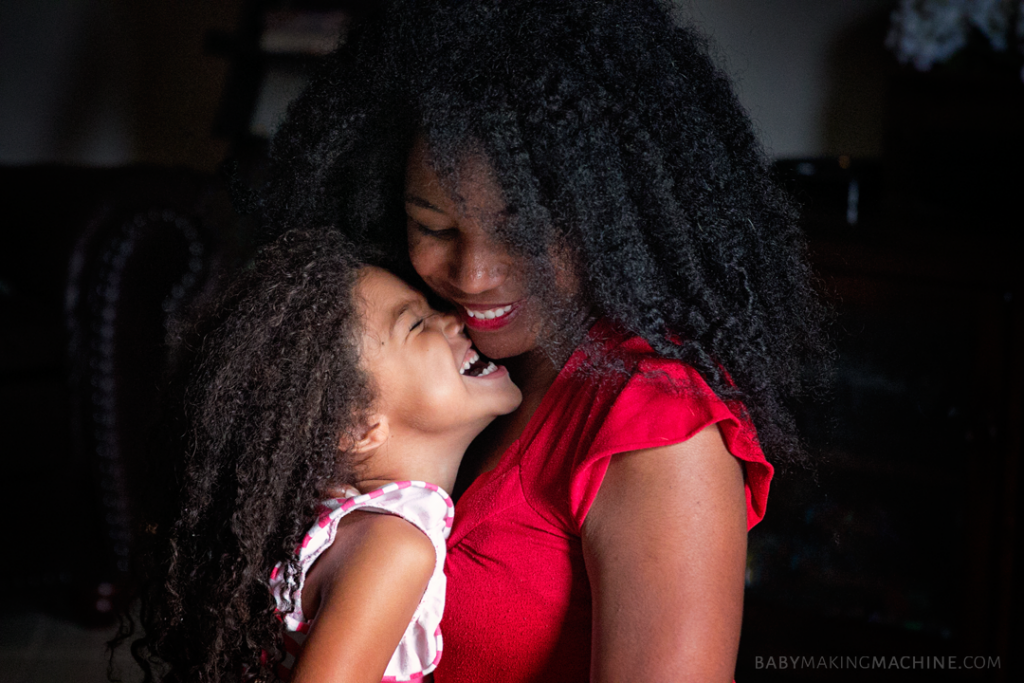 We may give hair straightening another go sometime now that I own my first ever blow dryer. But I’m in no hurry. We love our curls, our hair, and all the many things it can do!

Oh yes! Your curly hair is so much prettier! Although the straight hair is nice, too, just not as show stopping!

I’m so late to seeing this comment. Haha. Thanks Grace. That’s sorta how I’m feeling. I like how “Easy” it is to manage once it’s straight for a while and I sorta like just “blending in” with everyone else. However I LOVE how I feel with my curls all out and down. So glad I’ve gotten to this point. Finally! Took a while 😉

My little are swimming everyday too this summer. What is your hair care plan each night after they’ve been swimming. I hate to wash and condition it every night but don’t want to leave the chlorine in.. Advice?

Hi Sarah!
Make sure you coat the hair with a little bit of coconut oil so that the hair doesn’t get too stripped while swimming. I would wash with shampoo every third or more day, and there are plenty of gentle but effective cleansers out there if the shampoo is still too harsh. Every other day just rinse their hair and cleanse with conditioner only then make sure to moisturizer with a hair cream and seal that in with more coconut oil. 🙂

Thanks for jumping in for Sarah Ajira! I was out of town and got behind on comments! I agree. I usually do some kind of cowash or a gentle/natural shampoo every 2nd day but will probably move to every 3rd depending how much she swims. I make sure to keep them in braids and try to coat them with some conditioner before so it doesn’t soak up as much chlorine. Happy swimming!

Yes! A protective style is definitely a good idea! although I find loose hair more fun! 😀

Versatility is one of the best parts about hair. But she saw just like most that swimming is way more fun than a hairstyle!
Random I love the way your site looks on mobile phones?

Hey thanks April! haha. I’ve been tweaking the mobil design here and there. Nice to know people are enjoying it. Commenting isn’t too hard? And yes, I love the versatility of hair too! Gotta love what you’ve got and all it can do 🙂

I have pin straight hair and used to beg my Mom for spiral perms back in the late 90’s. My sister with curly hair (which I covet) has been blowing hers straight for ages.
I think we always want the opposite of what we’ve got – at least for a while.

I think that’s very true too. I just wish we saw more curly hair in the media as just as beautiful I loved that Princess Merida has curls and love Moanas too!

My hair is so thick and long, that it also takes FOREVER for me to straighten it! I ADORE your and your daughter’s natural hair, so beautiful-you both really have a beauty about you (: Swimming is totally more fun than a hairstyle! Thanks for sharing <3

While I don’t have any experience with curly hair, I would suggest checking into a product called the Maxiglide Hair Straightener by MaxiusBeauty.com I’m sure it’s also available from 3rd party sellers on various sites.

It has tiny teeth on the plates and uses bursts of steam to help straighten and keep the hair moist at the same time.

This is their original infomercial.

Hi, I’ve just discovered your fantastic blog! So exciting to see other families in a blog that refect my multicultural family, it hardly ever happens! My daughter is only 18 months old and has perfect curls, but I guess one day she will want to experiment with her hair too and I’m totally fine with it…straight haired kids always want curly hair..you always want to try what you don’t have 😉

Wow! same hair.. i got it from my daddy side.. and son too.. so perfect curl..
You have an awesome blog!