My poor second child. His/her treatment is already far inferior to my first and they’re not even conceived.

At this point the first time around… Less than a year out from hopefully, maybe, possibly, getting pregnant, I was exercising (sorta), eating right, had quit caffeine, was getting lots of rest, and daydreaming about this child in my future. 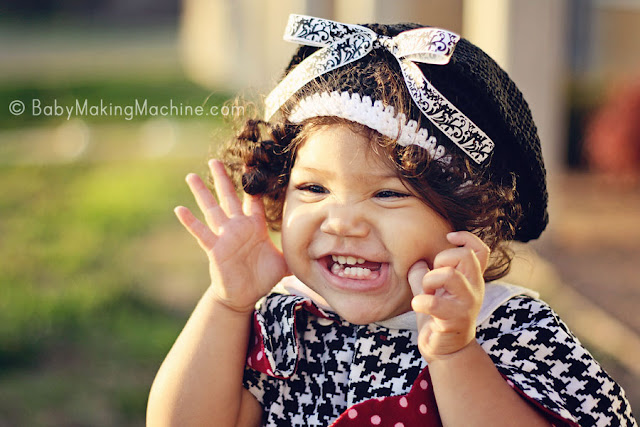 Now? Ha. Well now I down energy drinks every weekend to survive my morning shift at work. I get anywhere between 2-5 hours of sleep every odd night, and 8 hours on the evens. I am more focused on my career than a child that’s not here, and my baby fever flairs up most when I see how sweet Lil’ J is with babies and think how she needs a live-in friend.

Don’t get me wrong, I’m excited to have another child but I’m not nearly as obsessed with the timing. I mean, I know sometime between nine months from now and next June would be great but I’m also terrified of the thought of being drowsy and nauseous and sleepy while also working, and playing (with #1), and sewing, and writing and photo-taking.

Lil’ J has tens of thousands of photos, and a blog documenting her existence. I don’t know how I’m gonna keep that up for the next one.

If this is any indication of how #2 will be treated the rest of their lives, I sorta worry for them.

Before becoming a mom, I thought I’d want my kids to be between a year and a half and two years apart. Well that window flew by! Now I’m thinking between two and a half and three years because to me–the closer in age the better. Especially if we’re only having one more (I’d like two more, but we’ll see how lucky I get) I’d like the two we have to be close in age. But the thought of paying for childcare for two kids gives me a headache.

I wish I could press pause on Lil’ J. That way she could just stay the age she is now for another year or two and then I could press play again when we’re ready for her to have a sibling. My husband seems to think four years apart would be a good gap but that seems like a Grand Canyon-sized gap to me. But if the next year and a half goes by as quickly as this first one, that may very well happen.

I had that same problem before #2 come around but let me just say that as soon as #2 come along everything will come to place and turned out to have even more pictures then number 2, because every time number # is playing with baby, we will want to take a picture of it… Good luck with number 2, having my two close together was the best thing ever happen:)

But I was worrying about the same thing, where will I find the time or energy?

I believe you will naturally be able to give child number two the same love and attention as number one… This is a question I ask all the time of people that have multiple children and the state that it “just naturally happens”.

I hear that!!!!! And I am not even planning on a #2….time flies. And they are ever so lovely. And fun. And silly. And precious. And exhausting. ha!

I agree 200% That window is rapidly widening for me by the minute.

That first picture of J is just the BEST!!!

*sigh* its a one of the most rewarding and righteous desires a woman can have… being a Mother. I know I yearn for it almost every day… But the timing has to be right (and its not for us) but when it is.. You will know.:) Don’t stress! Enjoy what is here now!

and btw.. don’t compare yourself to your past self… I do that far too often and its a never winning battle! Your circumstances are different now… 🙂 You’re strong and beautiful and thats all that matters 🙂

Childcare can be a nightmare in the cost department. What i find a lot of people doing when they have 2+ is getting a nanny because its generally cheaper than the cost to place two kids in daycare. I think when planning a family its best to go with the flow, when you and your husband are ready it will happen. My mom has 6 sisters and 5 brothers and her favourite sister is 15 years older than her so age difference sometimes doesnt mean much. It all depends.

I don’t know why by reading this after seeing you yesterday makes me sad. I wish I lived closer! I just want to chat it up for a few hours and talk about life, decisions, family and all that good stuff. I’d call but my allergies are making living nearly impossible today.

I have no advice, but I think you are an incredible mother. It is so evident how much you love J. There’s a quote somewhere that says ‘we can have it all, just not right now.’ I think that sums up how you might be feeling/thinking and how I feel on a nearly daily basis.

Well I’m sure you and your husband will now when it’s time and I’m sure your 2nd will be just as healthy and cute and your first! BTW she is so CUTE! Makes me excited to someday get pregnant and have my first!

I just want to chime in and tell you that brother and I are four years apart and while at times, 4 years seems like a world of difference, we’ve always been close growing up. If you raise your children to be close, they will no matter what the age difference.

Oh my God Jennifer. I apologize to my Moonbeam everyday. I have been so busy this pregnancy that I haven’t spent nearly as much time reflecting, planning, connecting with the thought of being a mommy of 2, taking care of myself, etc. as I did when I was pregnant with my Sol baby. I am stopping working next week, and hoping Moonbeam waits at least a week to arrive. I feel like I at least owe this baby a week of quiet stillness, reflection etc. With Sol, I had everything ready. I am nearing 38 weeks, I still need a carseat, I have hand me down cloth diapers but no wipes. I have onesies and sleepers, but have not put near as much time into organizing them as I did with Sol baby. I also feel like there is something very important missing from my list of things to get before baby… But I haven’t even had a chance to actually make a list. GEESH! I feel so horrible. I hope this baby doesn’t hate me. 🙁

I say go for it! My first two were 13 months apart and it was perfect. It was like having twins. They grew together and did all the same things as far as diapers, potty training, and eating. My third child is 3 yrs apart from the first set and it is totally different. They are on different levels. It’s like I have 2 grown kids and then a newborn that needs me every minute. It is life though and I won’t complain, it just takes some adjusting.

I promise you will figure it out when it happens. 😀 It’s funny because this reminds me of my latest blog post! http://thebusinessofbeingmommy.blogspot.com/2012/01/another-baby.html

I’m not a momma yet but I think the spacing will be “right” whenever it happens. I have friends who wanted their kids closer together but ended up having them 4-5 years apart…and others who ended up with kids closer together…and both think it’s perfect their way. One plus to waiting a little longer is that the older one can be a little more independent (dress themselves, etc.) while you need to give more attention to the baby…plus they’re good helpers!

I wouldnt recommend waiting as long as i did. My oldest daughter is 9 and my youngest daughter is 10 months! My 9 year old is Autistic so i felt really needed to think long and hard before i had another baby. After awhile we decided it was now or never. So here we are! Now we are thinking of having number 3 so number 2 will have a sibling close in age.

We got preggo with #2 because we felt we should, not because we planned it as well as we did with #1. It’s been . . .interesting. It certainly does throw childcare and working FT into sharp relief and has changed the way I think about those things. My brain shuts off trying to think about doing for 2 what I do for 1.

Also, I’ve never been one who worries about “how am I gonna love another as much as I love my one?” – it’s more like “how am I gonna continue to love #1 and give him as much attention when baby comes along?” I comfort myself with the thought that the love multiplies. Our babies will not only have us but each other – and that’s an awesome thought!

Honestly, I don’t think the age difference matters. My younger sister and I are 8 years apart but we have the closest relationship out of all five of my kids. Sure it’ll be nice for her to have roomie and playmate at home but don’t let that be your only reason for giving in to baby fever. I think she’ll be close to her sibling no matter when you all are ready to take that step.

Frankly, I’m hoping I have a case of the hidden twin so I don’t have to think about another pregnancy for long time…and maybe never. 😉 Hahaha. Which is crazy ’cause I don’t know that we can handle two! Since we already bought one of everything and are having a hard enough time coming up with a name for one.

I use to think the same thing about timing. Unfortunately my dad was called as a mission president during my 1st pregnancy. Neither he nor my mom were here for my daughter’s birth and have only seen her through skype. So now I want to wait until they come back to have another. So we’ll probably have a 3-year gap between No. 1 and No. 2.