What? It’s 2013? Christmas was a week ago? It feels like it was about 3 days ago. I basically feel that way about the last 6 months of my life. Where did it go? If a toddler didn’t speed up time enough already, this pregnancy pushed things into super drive.

I haven’t even had time to really sit back and think about my New Year’s resolutions but I’m thinking of updating that do before #2 list to the side and actually doing them, for one. And then just working on finding my new groove as a mom of two. I feel like I was getting so good at balancing everything and them BOOM… knocked up and it hasn’t quite been the same since.

But it’s ok, new year and time to start fresh. And three months to go to get some things back in order before they all get jacked up again.

For today, I’m gonna continue my 30 Things My Kids Should Know About Me series by responding to prompt #2: Describing three legitimate fears of mine and how they came to be. 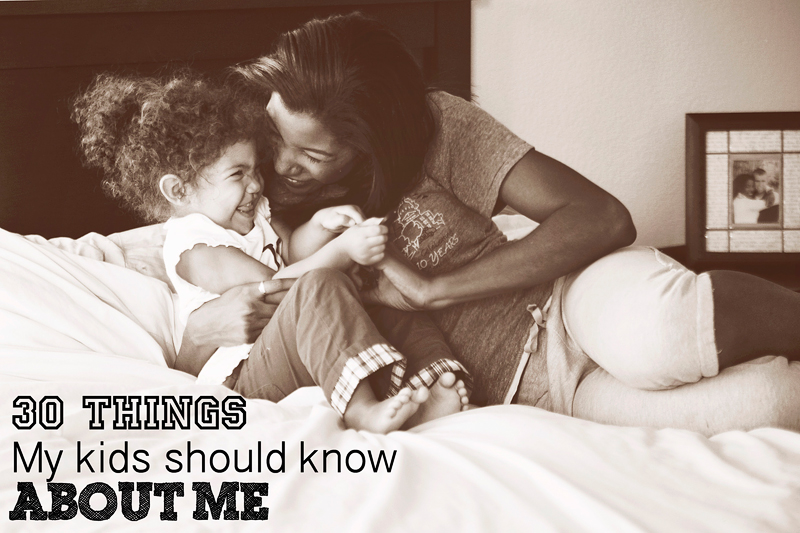 1. Spiders. I’m terrified of spiders, it doesn’t matter how small they are, I think they have the capabilities to kill me. I don’t know how this came to be. Maybe watching Arachnophobia at an inappropriate age, or my mom showing me potatoes with roots sprouting from it, shaking it at me saying “look, spiders!!” Either way, I’m still scared til this day.

2. I have a fear of making the wrong decision. As vague as that seems, it makes me so indecisive. It can be as small as fearing ordering something new off the menu and not liking it, or as big as fearing when to have another kid, or worrying I’ll later regret working so much while my kids are young. I’m not sure how this fear came to be.

3. Zombies. Does that count as a legitimate fear? If not, on a totally different note, I have a fear of praying in public. I’m not afraid of public speaking but public praying freaks me out. I’ll do it when asked but I usually won’t volunteer. When my family started going to the LDS church I felt “behind” in a lot of ways since many of my friends had grown up going. I think my fear stems from that.

I can blame my fear of zombies on The Walking Dead… Which I’m totally caught up on now by the way.

And there you have it. I know, I’m weird.

I was thinking the exact same thing this morning, how pregnancy has totally warped my sense of time over the last six months! I got pregnant in mid-June, and pretty much since then everything has revolved around that. I didn’t feel great for a solid couple months as the summer wound down, then I think I sort of got lost in waiting for “stuff” to happen…to start showing, to start feeling kicks, etc. And then it was Halloween, Thanksgiving, and Christmas…and now we have two months left and we have so much to do! We need to pick a name, for starters, and we’ve been in the process over the last week or so of moving my son out of his “baby” room into his big boy room. We’re waiting on furniture so I’m at a bit of a standstill, but I’m getting nervous because we still need to paint and get all of the baby stuff out of storage, washed and put away. Time has flown, though, and I can’t believe this has been going on since June and it’s now January! Not possible!

I’ve grown up LDS my whole life and still have a fear of praying in public. I’ll do anything else but pray! So I feel ya. And I also fear what if I don’t like something new and I end up paying $12 for it, so I always get the same things at restraunts.

I borrowed this whole idea from you (gave you credit) and I have only done two of them as well. We’re pretty much on the same pace. 😉 I have a fear of spiders too. And snakes. To me, they are both out to kill me.

I totally have the fear of making the wrong decision. I get so anxious trying to make the right one its ridiculous. I’m totally that person in the drive thru window that takes 5 plus minutes to look over the menu and then still changes the order at the pay window. Lol.

I LOVE your 30 things my kids should know about me. I found it through Pinterest! and I’ve grown up in the LDS church and have a fear of both praying AND giving talks in church…but I’m super social. haha, Love your blog, love your photography, and love your family ideas…and with theses 5 monsters, I can use all the help I can get!

Ok, I need to start doing these. I like the idea! And props to you for working, WHEREVER it may be 😉 and raising kiddos. Because kiddos alone, is NOT easy. Adding work and trying to keep them entertained/out of things, is another job in it’s self 🙂 ha ha! Again, kindred <3

You should do it! It’s been fun!

If you want to grow your know-how simply keep visiting this website and be updated with the newest gossip posted here.

I’m really enjoying the theme/design of your website.
Do you ever run into any internet browser compatibility issues?

A few of my blog visitors have complained about my website not working correctly
in Explorer but looks great in Opera. Do you have any tips to help fix this issue?

Pretty portion of content. I just stumbled upon your website and in accession capital to say that I get actually enjoyed
account your blog posts. Any way I’ll be subscribing on
your feeds or even I fulfillment you get admission to persistently fast.

If some one desires expert view concerning blogging then i recommend him/her to pay a quick visit this weblog, Keep up the fastidious
work.

Not all countries are doing this however, and also
in places like Easter Europe and Asia torrent downloading is not a problem.
With Ophcrack, you should not have any access to Windows so that you can recover your lost passwords.

Specifically, IBM wishes Microsoft to formulate a programming language to the system.

That is a good tip especially to those fresh to the blogosphere.
Short but very precise info… Thank you for sharing this
one. A must read article!

Check out my webpage homepage

Hello, Neat post. There is an issue together with your
website in web explorer, could test this? IE still is the
marketplace chief and a large portion of folks will leave out your excellent
writing due to this problem.

What’s up, I read your blog like every week. Your humoristic style
is witty, keep doing what you’re doing!

Reply
http://www.dailymotion.com/video/x18nvnf_my-elite-serum-review-dr-oz-recommended-argireline_lifestyle says:
April 13, 2014 at 6:54 am

In a year, thousands and even millions of dollars are being spent in products
and treatments that help keep the face look young. If you doubt using new product,
you have concluded that Life – Cell is a fiddle. These treatments for dark circles
under eye require the supervision of a dermatologist.

Excellent blog you’ve got here.. It’s difficult to
find excellent writing like yours these days. I honestly appreciate people like
you! Take care!!

Feel free to surf to my page; Video Converter MP3

Woah! I’m really lovinhg the template/theme of this website.
It’s simple, yet effective. A lot of times it’s challenging to get that “perfect balance” between usrr friendliness andd visual appeal.
I must say you have done a very good job with this.

Also, the blog loads super quick for me on Safari. Excellent Blog!

Excellent write-up. I’m examining constantly this website and i’m encouraged! Highly valuable details particularly the final segment 🙂 My spouse and i deal with such information a good deal. I’d been trying to get this specific certain info for a long period. Thank you as well as best of luck.

Had the best time with the best people 💛

“Ok, we can take a picture,” speaking my langu

To my sweet spirited Lee Lee, you are a GIFT! I re

Getting the kids out to play in the summer heat is

They say we should dare to dream then decide to do

Each new school year we reevaluate our school opti