This is How I’m Getting My Son Ready for Kindergarten

Over the last year I’ve spent a lot of time schooling my daughter, taking her to her activities and staying and watching her do each one. My husband usually stays home with our son while I chauffeur her around. I’ve noticed she’s started lacking some of the independence I used to see her exhibit. And it hasn’t exactly been fair to my son.

We just changed things up a bit. Instead of taking my daughter to cheer practice and watching her for an hour and a half, my husband is dropping her off. I’m using some of that time to have some much needed one-on-one time with my son to play, and do a little learning.

He’s so smart when it comes to remembering things like the names and numbers of various types of trains, and characters from Cars. He also knows almost all of his letters and numbers. However, he doesn’t write and he’s only cut with scissors once (just last week, I thought he’d cut strips of paper but only managed to cut pieces off the paper and was pretty thrilled with himself).

He’s so smart when it comes to remembering things like the names and numbers of various types of trains, and characters from Cars. He also knows almost all of his letters and numbers. However, he doesn’t write and he’s only cut with scissors once (just last week, I thought he’d cut strips of paper but only managed to cut pieces off the paper and was pretty thrilled with himself). 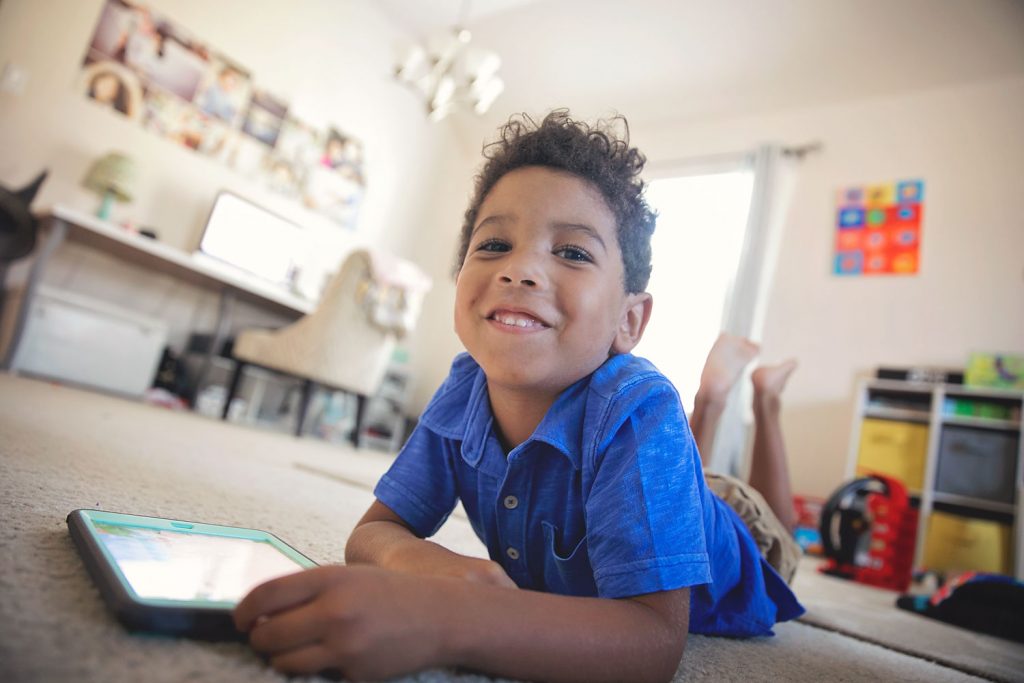 We are practicing and learning a lot of these things using LeapFrog Academy. Though he just learned how to play using my computer, it’s easier for him to navigate on his own using the iPad. So far I’m loving the variety of games and activities. There are more than 1000 eBooks, games, puzzles, videos and music across the interactive learning adventure. Each of my kids has a separate profile and he’s learning how to recognize his name and get going on his own.

As I’ve mentioned, Big T doesn’t like to color, or hold writing tools for that matter. I got an idea and dug up some of my old stylus pens to see if he’d like using them on the iPad. 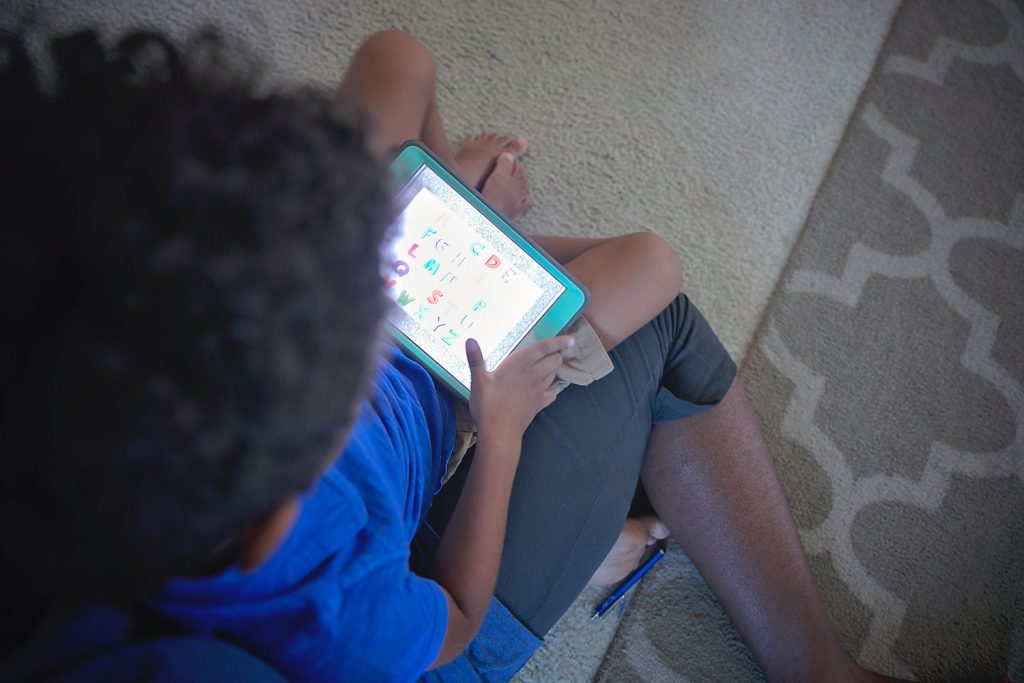 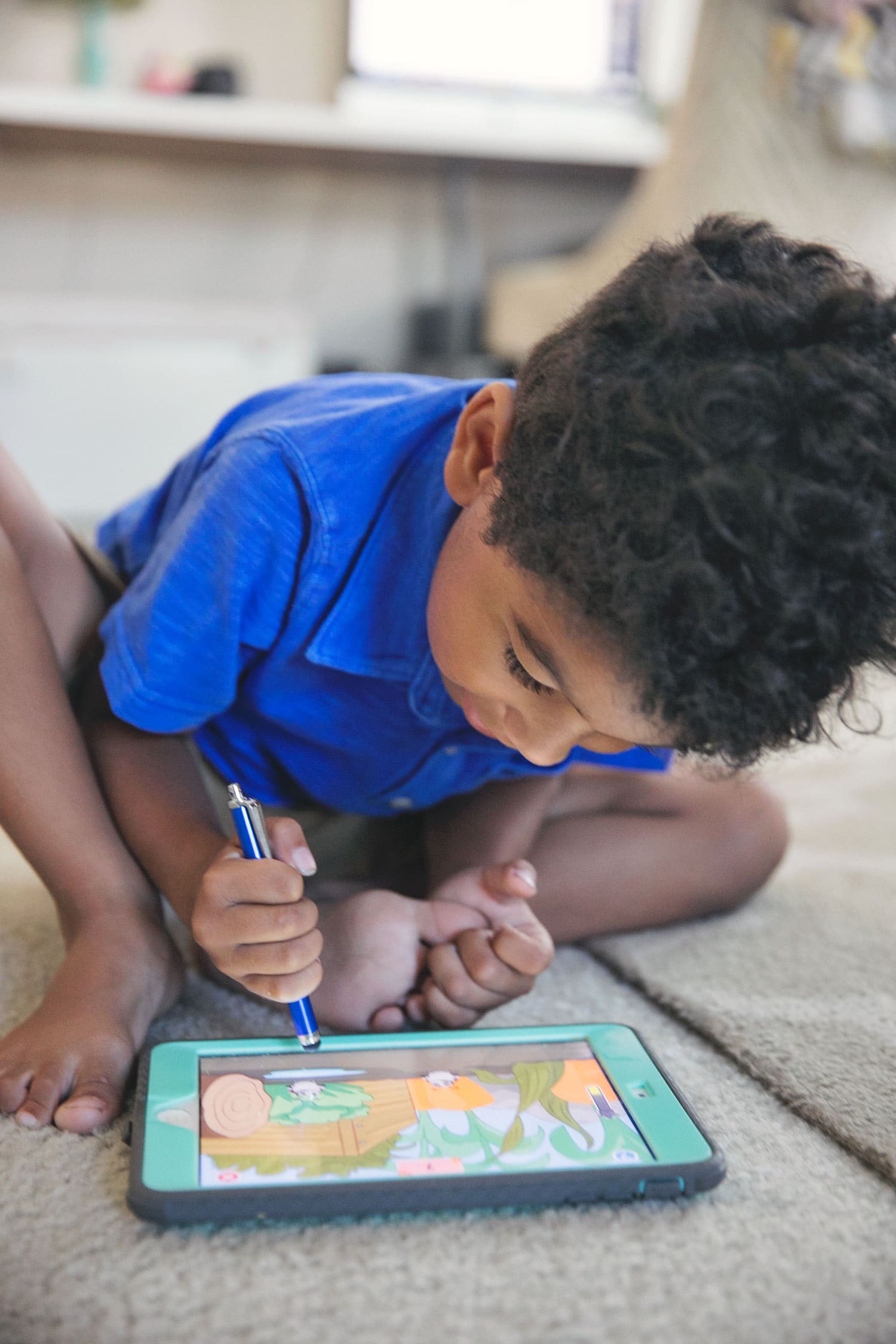 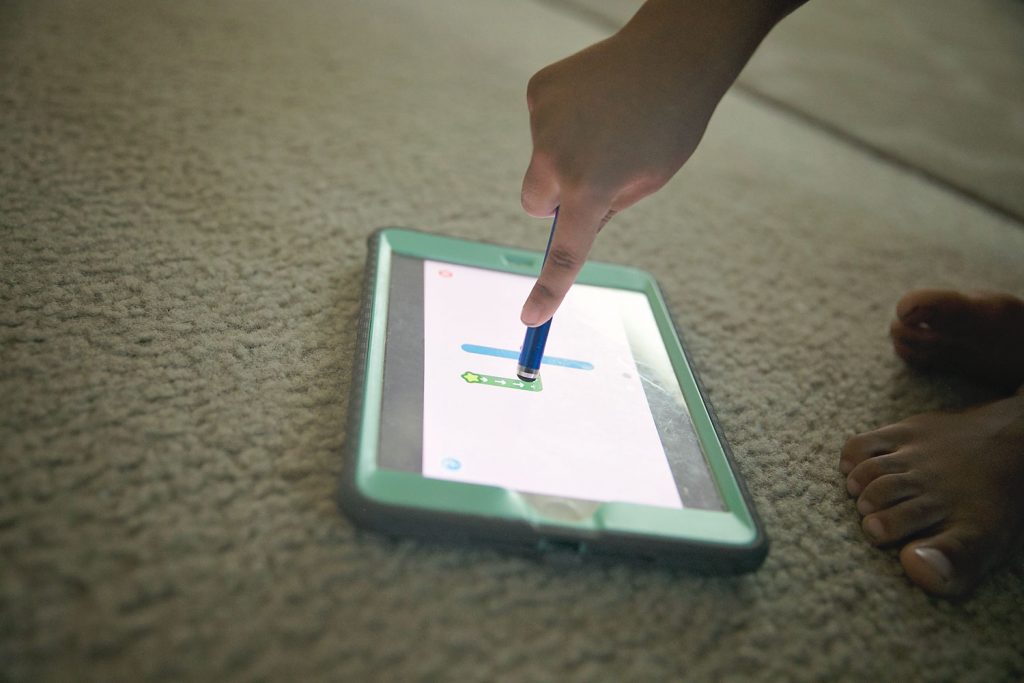 I called it his “special pen” and it’s been a hit! He’s still not holding it quite right but with practice I know he’ll get there. There are some tracing letter games and a lot of clicking and dragging that he’s using the stylus for. So he’s getting some fine motor in with his mental learning through the activities. It isn’t necessary to use the app. He loves tapping along and playing with his fingers too. His favorite games seem to involve space ships and fast-moving objects that get him choosing an answer quickly. He also really likes the memory matching games though right now he’s terrible at them.

It’s ok though because not all kids learn in the same way. There are extra activities in his “My Learning Lab” section of LeapFrog Academy to give him extra practice in subjects he needs help getting down, or more difficult activities designed to keep him challenged. 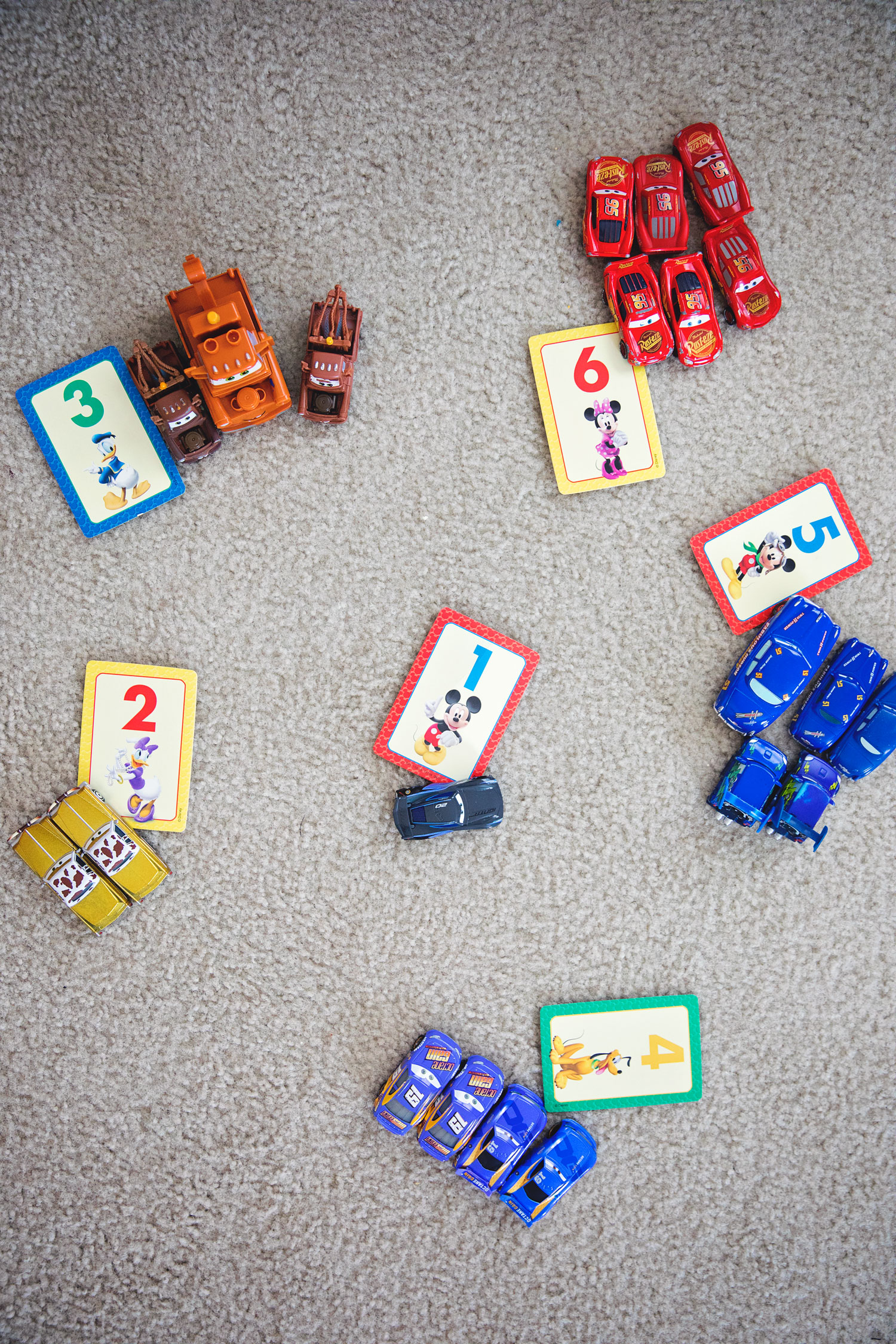 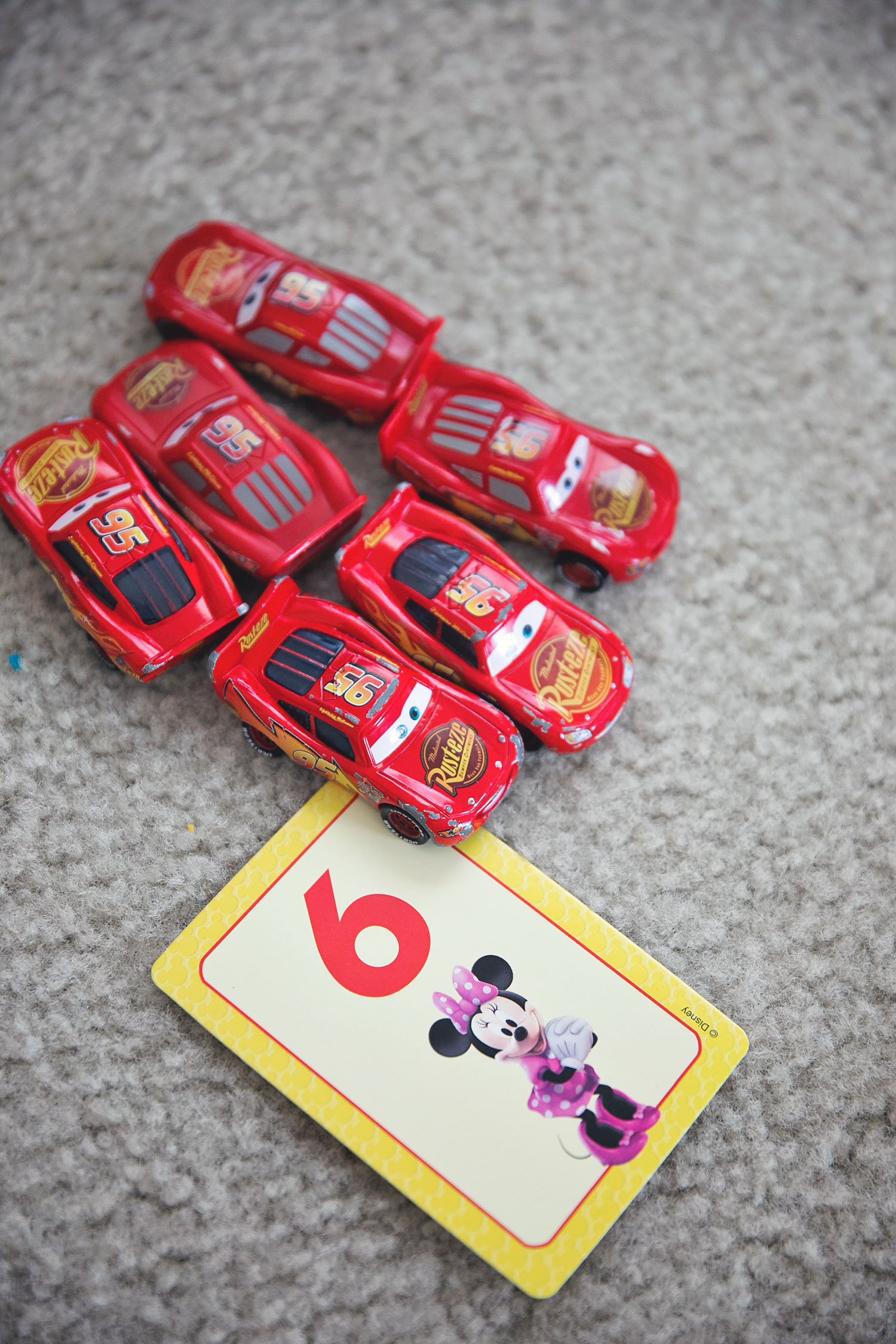 We’e also started working on some of these things just goofing off with his toys. I used his cars to teach addition concepts. One game we play is when I put five cars out, ask him to close his eyes then hide some behind my back and ask him how many were missing. This game went surprisingly well. I’m also going to start having him match piles of cars with the corresponding number that matches how many are in the pile. I’ve started teaching letter sounds using words he likes such as “L is for Lllllightning McQueen” “M is for MmmmAter.”

Getting dressed and stuff 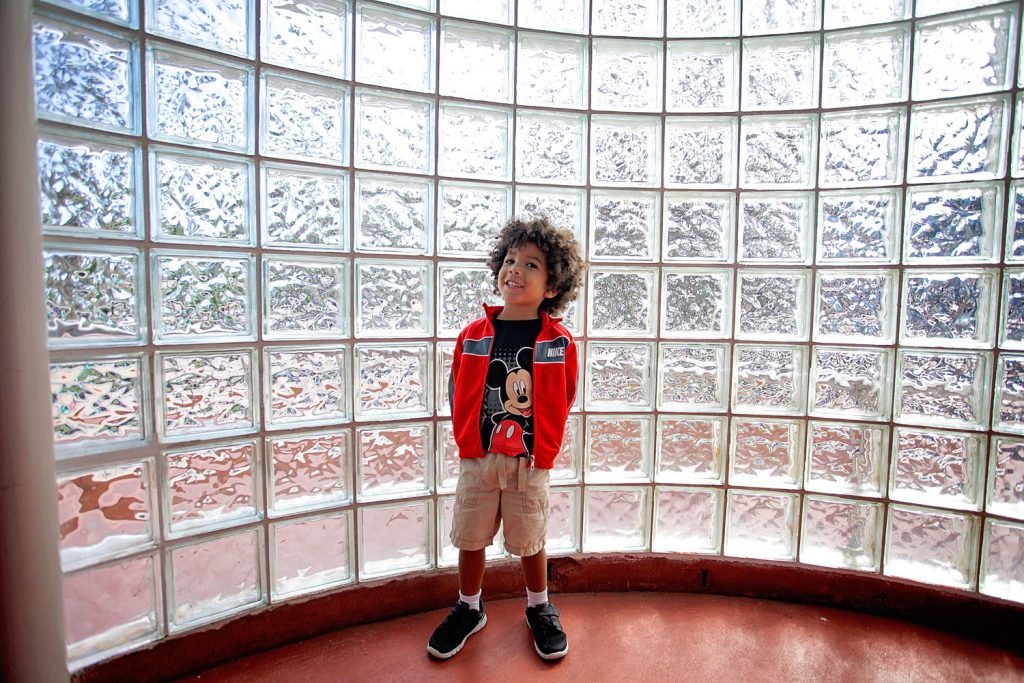 I blame a lot of his lack of life skills on myself. He’s my baby, and I’ve treated him like one for a long time. I assume he can’t dress himself, or do other simple tasks and just do them for him. He’s become really reliant on me for things like getting him dressed. We finally put our foot down and taught him how to get his shoes on. He can at least put his sandals on. When winder comes we’ll see how he does with his sneakers. These tasks may take the most patience of all as he learns to do these skills himself and we give him time to get it.

With this clear list of goals and a lot of practice I know we’ll get there. And who knows, maybe in the process we’ll decide we make a good homeschool pair after all.

I’m passionate about getting my children excited about learning. That’s why I’ve partnered with LeapFrog for 2017, to share our journey to making learning fun and inspiring my kids to be the best they can be. LeapFrog Academy takes kids on Learning Adventures that guide children around the islands in My World to explore eBooks, games, puzzles, videos, music, and art activities. Adventures focus on specific subjects and have titles like Get Ready for Preschool; Letters, Sounds, and Rhymes; Math and Science; and Critical Thinking and Problem Solving. You can learn more about the program and sign up for a free trial here.

So many great ways to make learning fun. The best part is the “fun” and the learning just sort of comes with it.

Leapfrog Academy sounds like a great way to get kids ready for school. If learning is fun it’s so much better for my kids. They seem to remember fun lessons better than boring ones anyway.

Leapfrog is great. So are your Kindergarten readiness tips.

Glad you liked them!!

I love that you are setting goals and working with your son toward meeting those goals. These are great tips and I will keep them in mind when my little guy is getting ready for kindergarten!

Yea, I’m trying! Crossing my fingers it works out! 🙂

We also used Leapfrog items to help get our girls prepared. Of course, this was 10 years ago, so I’ll bet the tech is much better now.

Oh yea, there’s so much cool technology now. We even just got the Epic tablet which my kids are LOVING.