I’ve been meaning to show you this dress forever! Have you heard of BabySteals (or KidSteals)? It’s one of those sites where you sign up and get an email every day (or twice a day) with the deal of the day you get for like 40-50% off.

I’ve signed up for so many of those dang sites that I’ve just had to delete most of them before opening. I mustn’t be tempted with cute swaddling blankets, birthing balls and toddler toys. I believe in good deals, but good deals can quickly become expensive if you’re always buying them.

But one day, I saw a steal I couldn’t resist. 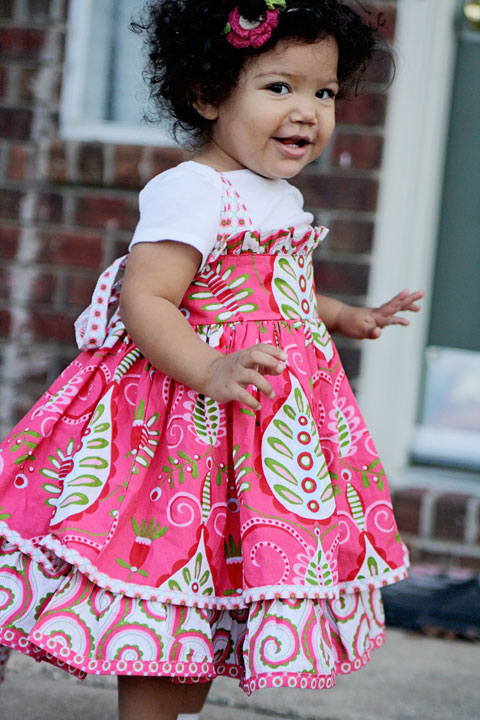 Jelly The Pug. What the..? I know, I asked the same thing at first. But I opened the email anyway and behold, I saw some of the most darling dresses I had ever seen. 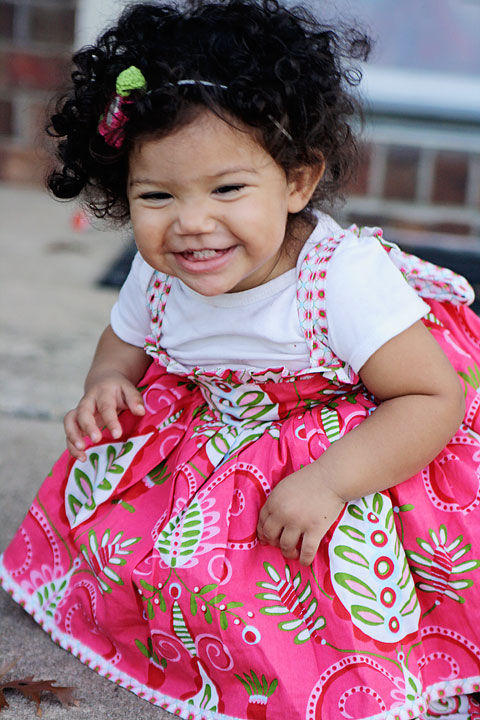 I don’t think I’ve ever dropped $50 on a dress for Lil’ J, but these were half off, so I could spend less than $30 and get the ruffled goodness before my eyes.

I caved, picked the one I thought was the cutest, and bought it (in 2T although she was only in 12 months at the time), just before all of the steals sold out. 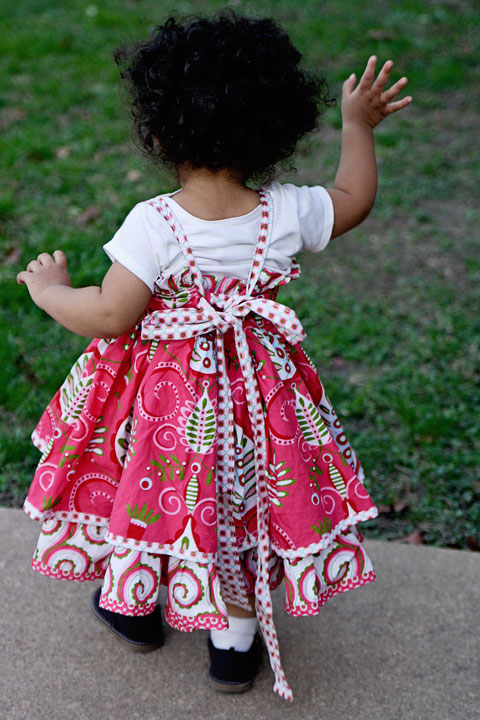 It shipped and arrived super fast, but it didn’t matter because it was so big, and totally swallowed her up. She didn’t wear it out of the house for some time. But finally, one day, as I was sorting through her closet, I noticed this bright piece in the back and realized it wasn’t so small anymore. I still had to tie the straps extra tight but she was able to wear it to church. And on a chiller day with leggings and a cardigan. 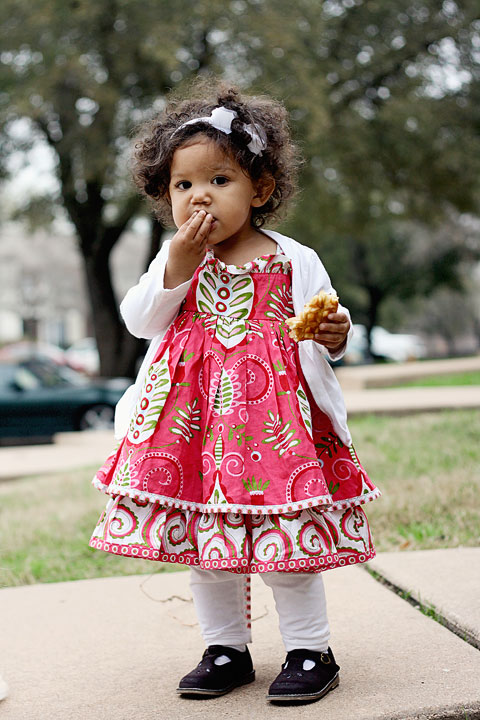 This is… Dare I say it… My favorite dress of hers right now. I’ve been studying it and trying to figure out how I could duplicate it with a double skirt, bias tape, and ruffles at the top. I searched Etsy for weeks and found a pattern that’s almost identical from Create Kids Couture, except the straps are halter style. Of course I bought it (I think I’ll send them some photos of Lil’ J to use after I complete it). 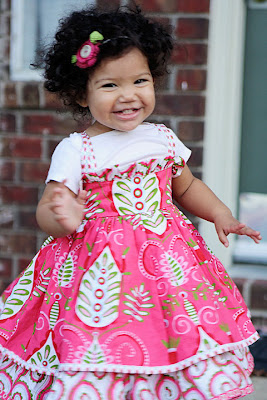 I haven’t had time to try it yet but now that the seasonal holidays are almost over (I don’t see myself making St. Patrick’s Day dresses, and will probably only make a couple Easter-themed t-shirt dresses) I’m looking forward to picking out fun fabrics in bright Spring colors and making dresses she can wear past the holidays. Initially I was sticking to the holiday-theme because it gave me a deadline. I only had X amount of time until Christmas and if I have a heap of Christmas fabric I needed to sew fast so she could wear it. Same with Halloween, Thanksgiving, and Valentines Day.

Anyway, I’m in love with this dress, and excited to fill her closet with a few more like it, whether I’m getting another steal or making it myself.

As for the rest of her outfit. Leggings, shoes, and cardigan/ undershirt were all from Walmart. Sorry but you can’t beat their Granimal deals. When it comes to solid tees and pants I love them, and they’re great for t-shirt dresses. The shoes aren’t my favorite. This girl has so many fabulous shoes, but most are soft-soled and those don’t always fly so well when it’s damp outside, or when she’s running around at school.

Have ya posted pics of you cutie wearing something fab lately? Add your link to the list below so we can see!

(Highlight and Ctl+C to copy)

That dress is just too cute! Lil J is working it!

That dress is too much. I could die.

The dress is all kinds of cute! Lil J should definitely be getting paid for her wonderful modeling skills!

She is so adorable. Beautiful colour dress

I wish so much that my little girl was walking, I wanna put her in the sweetest shoes and adorable dressed like you and The Baby Shopaholic.

Sofia Marie is only 6 months – got a little more time to wait.

LOVE THIS POST…. you will see me posting soon. You can count on it.

Nah, if you wore it without tights it might be crossing the office attire line, but you did good!
You look lovely…

Come on over to Little Miss Mama, the Tea is always hot and the Cupcakes have perfect Icing to Cake Ratio <3

What a cute dress!! I love it.

I love that dress!! Wish I could sew that for my daughter, but I need more practice! 🙂

Oh my goodness… how do you have time and energy for working, blogging, sewing, and being a wife and mother?! You are my idol.

Holy cow lil J is a cutie. We just had our little boy and hubby and I are in love with him. It’s such an awesome feeling being a mommy 🙂

Thank you so much from Create Kids Couture! Your daughter is the cutest and we are so glad you like our design <3 How funny that it is similar to that dress you ordered! We thought we were being original! lol. Seems great minds think alike! We would love to see the dress you create when you do so please let us know!

very good , your provide dress is looking beautiful and i like it ,its very useful for baby’s

Man o man – that is a fabulous dress. It looks like she should be able to wear it for a few years too, which is awesome. I love that aspect of large twirly dresses. They are layla’s favorite, without question. All her skirts and dresses now have “a twirl factor.” If it doesn’t spin out far enough, she doesn’t wanna wear it. Ugh, I could die it is so cute!!!