I set up appointments to get physicals more than a month ago. I’m not a huge fan of doctor’s offices and I consider myself very lucky to have a nurse for a mother-in-law. I usually call her with all of my medical questions, and to make sure I’m not dying.

As a part of this list of things to do 6 months to a year before baby makin’ I decided to go ahead and at least do this.

We arrived to our appointments right on time… Not 20-minutes early like the receptionist asked. I liked the way the office building looked. It was small, quaint. Unlike the huge and commercialized offices I had visited previously.

After completing our paperwork the nurse 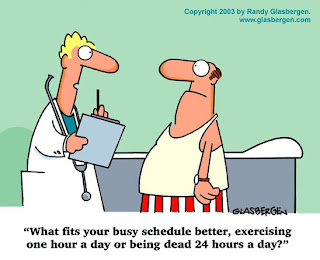 quickly called me back. I motioned for my husband to follow me back but he shook his head. “You can come,” I urged just above a whisper. But he wouldn’t.

After doing a series of basic blood pressure and pulse tests she instructed me to change into the clinic scrubs. When she left the room I heard her call my husband in and apologize that she didn’t ask us to come in together ‘yea, that’s what I tried to tell him’ I thought.

So there we were. Our doctor, and Indian man, was probably the nicest doctor we’ve ever had. In fact, normally we don’t like to go to the people in white coats, but he changed our perception. But what threw me for a loop was when the doctor asked: “So are you two thinking about starting a family?” and after glancing at my husband, I let him reply, he said: “Yea, probably in the next 1 to 2 years.” I gave him the ‘what?!–No, wait, we’ll talk later’ look, and as soon as the doctor left the room we did.

“A year to two years?” I asked.
“I didn’t mean to say that,” he said defensively. “I meant I wanted to have a kid in hand in like a year or two.”
“Well no one thinks in those terms,” I shot back.

While I went to get blood work done hubs completed his physical, and when I walked in I overheard them completing a conversation about what’s safe before or during pregnancy. ‘Now we’re talking,’ I thought.

We decided to take our Tetanus/ Pertussis shots then as to not have to worry about it later when it’s baby makin’ time. The doctor gave me good advice… Prenatals, calcium pills, constant exercise, yoga and meditation (?), OB referrals… The whole nine yards. I felt a lot better after going through that process– Actually talking to a professional and getting my questions out in the open.

I got a phone call the other day about our blood test results. My husband’s came in a day before mine and I worried something was wrong–What if I was.. you know. Do they test for that?

I let out a sigh of relief, not because I needed an excuse to lay off the french fries, but because she didn’t tell me the news I’ve been dreading–I’ve been suspicious about. I have a feeling this is only the beginning of my paranoia.

I’m glad your physicals went well and you liked your doctor. It is so hard to find a doctor that you feel cares about you. I have lived in Las Vegas for awhile now and have gone through 5 ob/gyns and finally have found one I think I will like. Happy your levels are good too, just FYI, we miscarried one and that doctor never checked any of my levels at all (one of the reasons I found a new one). Well, then we tried since our miscarriage which was 1 year 8 months ago and have had no luck getting prego! Another doctor checked all my levels (hormones etc). My thyroid levels were off, sent me to thyroid doc who mentioned that now he has to check my cholesterols because that has something to do with thyroid. My cholesterols were fine so basically I have an inefficient thyroid. So if you’re cholesterol levels are off and when it comes to baby makin time and its not as easy get your thyroid checked. I have probably had thyroid problems since my 1st pregnancy/miscarriage. Now I am just out of my first and my new doctor thinks that fixing my thyroid fixed my problems with getting prego. He said it really screws up with ovulation, etc. Oh and your charting post is a great idea…I was trying to do the BBT and chart but since my ovulation was screwed up couldn’t ever quite figure it out. Oh well, it all works out in Heavenly Father’s plan. We are so excited and know that our losses and trials were for a purpose even if we don’t understand them yet. So good luck with attacking your cholesterol levels!

I really need to get to a doctor. Thanks for the reminder!

It is an awesome start that you did the physical and actually liked the doctor! Happy for you that your paranoia was unfounded (this month!) and wish you lots of meditation to make everything go more smoothly… it REALLY does!
Work on that cholesterol and give your hubby a big old pat on the back for being so involved!

Although I have no kids (yet), I am 31 and satisfy my baby desires with researching the subjects about children. How wonderful that you are really taking time to do your homework before hand 🙂 I decided years ago that I would use cloth, and was SUPER astounded as well by how advanced they are now (and pricey). I like the idea of the adjustable all in ones. Technically, you could diaper a baby from birth to potty training age for under $350. I’ve also heard and read that they train faster with cloth because they are able to feel wetness better?!

Glad you’re well, and even better that you are happy with your doctor!

Well it’s nice to hear that everything went well! And what a wonderful thing that you love your physician!

I havent visited in a while and I LOVE LOVE your new look.

Been doing a serious on TTC, if you are interested….check Works for me wednesday.

Welcome to the roller coaster that is pre/pregnancy/post doctor visits!