The One and Only Ivan: Perfect Movie Night Flick or Flop?

Well it’s been a minute since we’ve done a movie review. I was looking forward to screening “Mulan” in March just before the shutdown began, then “Soul” this summer. While the list of movie releases getting pushed back seems to grow, others are getting pushed to digital streaming release. Movies like “The One and Only Ivan”. Which my kids and I had a chance to screen from our home last week and I’m pumped to dust off my movie review skills and share what we thought of this one.

If all you’ve seen are the movie posters you may have thought this was another Disney Nature film. But this movie is a remake of the bestselling book by Katherine Applegate, which is based on a true story of a Gorilla raised in captivity at a shopping mall no less.

I broke my own cardinal rule by watching the movie before reading the award-winning book. So in case you’re like me, going in without much background to how the story plays out, I’ll leave out any spoilers from this review.

The story follows Ivan, a 400-pound silverback gorilla, who shares a communal habitat in a suburban shopping mall with Stella the elephant, Bob the dog, and various other animals. Ivan has few memories of the jungle where he was born, but when a baby elephant named Ruby arrives, it touches something deep within him. Ivan begins to question his life, where he comes from and where he ultimately wants to be.

The One and Only Ivan Movie Review

Visually, the adventure was beautiful with a mix of live-action and CGI. The bright colors and variety of animals had each of my kids–even Lee Lee–watching for different reasons. The movie boasts a really cool cast from Angelina Jolie, Bryan Cranston, Chaka Khan and more and we fell in love with each of their characters for different reasons.

The story is told from the animals’ perspective which drew us in and kept the kids entertained. Throughout the movie we were rooting for the characters and cheering them on in their adventures. But there were definitely parts throughout that felt slower, and a little repetitive.

We were all in agreence that the ending was the best part. I’d say the last third of the film.Then the credits were especially enjoyable to watch and seeing pictures and videos of the real Ivan. I found it especially touching realizing that I’d seen him in person before.

I love how it opened up conversations with my kids about animals in captivity and animal conservation.

It’s a heartwarming film perfect for the whole family. While it probably wasn’t a movie I’d pay to go see in theaters, with the slow parts having my little one up running around, it’definitely worth a watch for family movie night at home, especially if you have an animal lover like I do.

Which leads me to my kids’ reviews.

Q: What did you think of the movie?

A: It was about animals. There was a gorilla, a dog, seal, an elephant and a baby elephant. I liked it because there were animals. My favorite animal in it would probably be the seal. I liked the ending a lot.

Q: Who do you think would like this movie?

A: I think grownups and some kids who like animals.

Q: Do you want to watch it again?

A: No, because there wasn’t a komodo dragon or a bear or a lion. I kinda wanted them to have reptiles.

Q: If your favorite movie is a 10, and your least favorite is a 1, what would this be?

Q: Tell me what you thought about the movie.

A: I thought the movie was nice for school because you can learn. It depends how young your child is. I’d they’re 4 or 5 or a little one you can teach them a lesson about animals in captivity. But I’d they’re older and they already know about that, it can be a fun movie that you can watch anytime.

Q: Who was your favorite character?

A: 3 or 4. I felt like the lesson wasn’t that big and there were movies that have had bigger lessons. I like movies that make me think more.

Q: Did you think it was boring?

A: It wasn’t boring. I like how there was a Disney movie with animals and that they were taking. And that was cool.

Q: Did you think it was funny?

A: Some parts were funny but I wasn’t like I was laughing a bunch. I didn’t really laugh out loud but I chuckled a little.

Q: Who do you think would like this movie?

Q: Do you think it would be scary for young kids?

A: It didn’t seem scary at all.

Q: Do you want to watch it again?

Q: Anything else you wanna add?

A: I like that it was based on a true story. I didn’t know that.

If you have a Disney+ subscription and an animal lover at home I’d definitely add “The One and Only Ivan” to your watchlist. If you don’t like it, you didn’t lose anything but a couple hours of your free time. But chances are you, or someone in your family will love it. If you aren’t a Disney Plus subscriber yet, you can sign up for a free week to check it out (or wait until early September so you can watch this and rent the live action “Mulan” in the same week).

“The One and Only Ivan” begins streaming exclusively on Disney+ on August 21st. 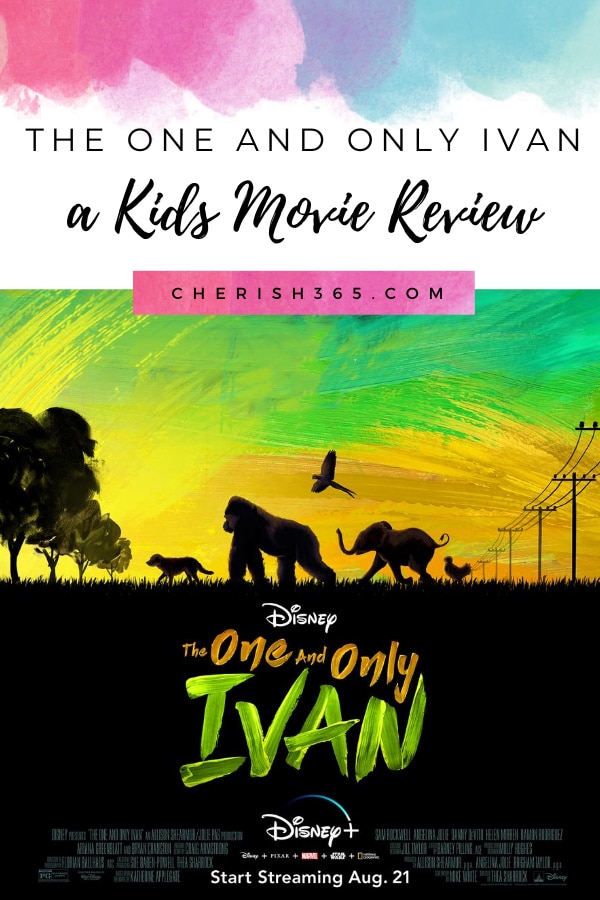