The Little Wristlet That Could (Based on a True Story)

Once upon a time there was a little writlet and a little coin purse, they were sent together to a lady named Jenn, but around these parts she’s known as “Future Mama”. 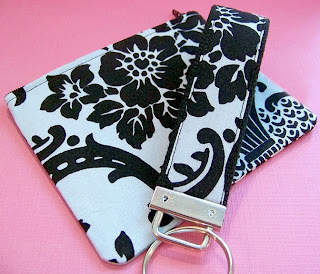 They were sent to her as a gift by a nice little lady named Michele… Who made them herself. She makes a lot of them as sells them in a town called Sweet Irie.

The coin purse went on an adventure with Future Mama first. They traveled all the way to Atlanta, and then to Chicago. And Future Mama drug the coin purse all over the place… But the sad thing was, she didn’t see it as a coin purse… No, she saw it had much greater potential for her needs at that moment to be served as a business card holder… For Future Mama had no place to hold her cute business cards during the Blogher trip.

The little coin purse went through much battery in Future Mama’s purse but she managed to survive being not stuffed with coins… No, stuffed with cards… many more than she probably should have held.

Sadly the coin purses’ mate The Little Wristlet was left behind at home. Future Mama was known to leave her keys on vacations and she didn’t want to risk it this time. But when Future Mama returned to good ‘ol Texas The Coin Purse and The Little Wristlet were reunited… Though Wristlet hardly recognized Coin Purse cause she was stuffed full and not even zipped up. She also wasn’t as nice and pretty as Wristlet was… But that was ok because she’s machine washable and after a good douse of Tide she’ll be as good as new.

But the next adventure was for Wristlet… Future Mama was really excited to put him to use cause she’s always loosing her keys.. Well, not really, but she can never find them in her purse cause it’s so full of stuff (kind of like Coin Purse). But The Wristlet never lets Future Mama down, as he’s always looking out and positioned just right for Future Mama to grab when she sticks her big hands down reaching for him. But the other night, Wristlet came in handy more than ever when he doubled as a body guard.

Future Mama was downtown. She had just finished listening to live music and a hanging out with friends at a restaurant when she realized it was time for her to go.

Future Mama sometimes feels like an old lady and leaves earlier than everyone else. No one at the party was ready to go just yet so she decided to leave alone.

As she left the restaurant she remembered how far away she had parked from her car and decided to walk a little brisker.

She went further down the road and things started to get darker and quieter. Just then she heard The Wristlet jingle in her purse and he reminded her of a technique a friend told her.

She took Writlet out and stuck her wrist through him. Then she used his 4 1/2″ length as an asset and pulled individual keys through each space between her knuckles… In case she had to punch a mugger in the face. 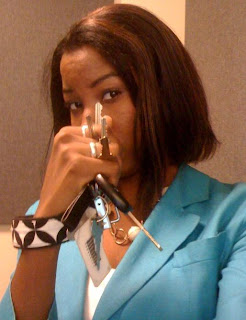 Wristlet is strong and sturdy enough to withstand a punch or two.

Just then Future Mama noticed a man walking quickly behind her. She grabbed Wristlet and the keys he was holding tight in case she had to go in for the kill.

The sneaky man must have spotted Wristlet and her key-filled power knuckles cause he backed off. Good thing.

Future Mama made it to her car safely and drove home.

At that moment Wristlet realized how grateful he was to have been with Future Mama that night. And he decided he’d be her protector forever… Or until he retires and becomes a play toy for Future Mama’s Future Babies (he knows they’ll love keys!).

When The Wristlet saw Coin Purse laying on the table he told her about what happened. Coin Purse was proud of Wristlet for being so brave. Just as Future Mama was moving them to the side to make room for her laptop Coin Purse leaned in for a kiss.

The rest… Well, it’s history in the making.
(Coin Purse still has yet to be used for coins)

If some of you moms or future mama’s out there are interested in having a coin purse or wristlet of your own you can order some from the town of Sweet Irie. Wristlet is great if you have your hands full with groceries, shopping bags, or babies, and it’s always easy to spot… Even in Future Mama’s overflowing purse. And Coin Purse is even great for business cards!

The town has lots of matching couples to choose from but Nice Lady Michele is happy to make custom orders too! The sets are from $15 and there’s lots of colors to choose from. The town also has tons of other nice members of the community from handbags, to camera straps to wallets!

Pluses:
(On The Wristlet)
-You can customize your color
-Extra large size, easy to find
-Very durable (Future Mama has been a little harsh on poor Wristlet)
(On The Coin Purse)
-Very large, can fit LOTS of coins (or business cards)
-Also can be customized
-Both are machine washable

Could be improved:
(On the coin purse)
-The zipper is a little small for Future Mama’s taste so sometimes it’s hard for her to open with her gnarly hands.

Have a product or shop you just LOVE?! Tell me about it!

PS: I’ve gotta new poll to the side, please vote so I know what you’re thinking. Can’t promise I’ll do it, but I’ll based on your response I’ll consider switching some things up.

This is an adorable review. A refreshing approach to the normal reviews I read daily. Thank you for this!

I’m in love! I honestly think I just found Christmas gifts for all of my dear friends.

I LOVE your review 🙂 awesome products!

I like the idea of a make-shift deadly knuckle duster made with the help of a pretty wristlet. Good thinking!

(Over from SITS BTW, that’s a bummer, having to work such a long shift…and at the weekend too! Hope you get time off in lieu)!

I loved your story! So cute (except for the creepy guy…glad he went away)!!

I see it now, Future Mama, super hero and her side kick wristlet. Watch out foes!! I love it.