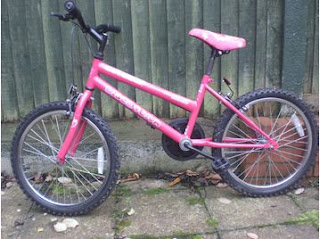 Six-year-olds don’t talk about what they do for a living, how long they’ve been married or when their going to have kids. They just wanted to know if that beautiful pink beauty with purple trim and sparkly streamers was mine… And oh yea, it was.

My first love wasn’t the boy in 2nd grade, not my first boyfriend or even my husband… All of these loves came much, much later. My first love was my beautiful, nameless but charming inaugural bike.

It’s a prize every child looks forward to getting at a certain point in their lives. I have no idea what age…8 or 9 maybe? When it came to bikes, I was a late bloomer compared to some of my friends. A bike for Christmas is a tradition I want to continue with my children. I imagine it’s a feeling that warms your heart… Seeing your child shriek and beam at the first glimpse of that new bike under-Eer, next to, the Christmas tree.

That first bike isn’t something you erase from your memory along with your Bio 101 midterm study guide. No–Your First bike is a memory you’ll hold dear forever.

My pink piece of steel survived many hot summers trekking across the hot asphalt, up and down my neighborhood hill and most of all…round and round the cul-a-sac my house sat on (cause mom didn’t want us to go very far).

I got into my first car accident on that bike. She saved me from the bees. Oh, in Georgia the bees were HUGE, and they’d chase ya! Yea, she saved my life… And almost ended it a few times too.

…But the memory that over shines all those other pleasant memories of my bike is the horrid memory of when my bike, my beauty, my first baby, was stolen from me.

It was a sunny afternoon. I was riding around the cul-da-sac with my best friend and next-door-neighbor, Jenny.

We were riding and singing, and riding and playing… You know, typical 10-year-old girl stuff. But then I got the call… From nature.

Without an explanation to my friend, I rode as far as I could up my sidewalk but I couldn’t make it inside of the garage. The sitting position was too much. I jumped off, pulled my bike as far up the driveway as I could and did what my mother always told me not to… I dropped my bike on the lawn.

I knew I wouldn’t be inside long. I’d of course go to the bathroom, then go back out. But that turned into getting a drink of water, some juice, a Popsicle then of course I wanted a snack.

I went back outside expecting to see Jenny but she was gone. ‘Maybe she had to go too’ I thought. But my mind quickly shifted to the void on the lawn… My precious was gone.

‘Oh crap!’ or something to that effect was the first thing that crossed my mind. The second was ‘mom is going to kill me.’ Then finally ‘Noooooooo!!!’

I darted to Jenny’s house, rang the doorbell and Jenny’s mom answered. I’m not sure what she was thinking but I’m sure she must have thought I had just seen a neighbor kid get run over by a car by the expression on my face.

I told her what happened and she got Jenny. But Jenny knew nothing of my bike. She said she went home to eat lunch and didn’t see anyone take it.

My heart dropped to my stomach. My stomach twisted into nothingness. My mind… Was lost.

I went berserk. Traveled door to door as far as I could before my parents got suspicious. I asked if anyone had seen my bike, or a bike thief. No luck.

It was time to meet my maker… My earthly maker that is.. Which that day, I’m pretty sure was scarier than the real.

Grounded–Of course. But really, who wants to play outside when you don’t have a bike? Not me. Not when all of my other friends have bikes.

I suffered in silence for a few days. I imagined ways I could try to get it back… Fliers, phone calls, bribes… A lemonade stand to earn enough for a new bike. My parents weren’t having it. I think they delighted in my suffering. Their punishment–My agony, was their joy.

Weeks later my parents dragged me with them on one of their grocery trips. On the way I noticed kids in the neighborhood up the street riding their bikes… Picking my wounds open again. But in a split second of a glimpse down a road (that was all it took) I noticed a boy riding what I knew was MY bike.

“STOP!!” I yelled, nearly giving my mom a heart attack and causing a family car accident. But before I was sentenced for that bad behavior I blurted the reason for my outcry.

“My bike! I saw a boy riding my bike!” They didn’t believe me… and cursed me to silence the rest of the trip.

But on the way home I couldn’t resist. I begged them to drive down the street I saw the perpetrator, and they humored me.

I scrutinized every house, lawn and child we passed. Then, as we turned the last corner I saw it… Lying beautifully in a yard I didn’t recognize. I knew it was my bike. My parents did too. And though I didn’t expected it, my parents got out of the car, and helped me steal my bike back.

I saw it as a stealth mission. Trying to be as sneaky and quick as possible… Stealing my prize back from its captor. But my parents weren’t amused. They made sure it was mine, and helped me get it in the car and take it home.

My first bike was stolen twice. Once from my front yard by a random kid up the street. And stolen back by me.

Needless to say, the bike was never stolen again.

I learned a few things from my first bike. First and foremost: When you’ve gotta go… Go! Secondly: Listen to your parents, and don’t leave your bike on the lawn, (especially if you tend to extend your brief errands). And finally: Never ever give up. Because just when you think its all over, you may just see the villain riding your damsel, waiting for you to seek revenge.

I’m entering this post in The February Scribbit Write-Away Contest.

Good lessons learned all the way around!! =)

You word things so well! I enjoyed reading this.

Hahahahaaaa. Your whole battle with the call of nature…SO not gonna stay the same once you get pregnant. (Trust me, I was the same…yah, not anymore. LOL!)

My first bike was purple. It was also a little too tall for me (ie, I could not reach the ground from the seat or even from the bar if I slid off the seat). I used to take it up a hill and then use a big stump to get atop the thing, push off, and fly down the hill to get myself going…. I was ok so long as I kept pedaling, but if I slowed too much then I would wipe out and had to haul it back up the hill again to get going. :p

OMG, my son is the same way with his bike. His Red Bike to be exact. During spring, summer and fall he comes home from school and hops on the bike. It’s like his soother at the end of a long day of school or camp. So I totally understand your love for the bike. We live on a dead end street and I will be more sure that he brings it into the garage. He just usually leaves it out front comes in goes back out and it’s still there. But you have taught me a valuable lesson. Thank you.

Go get him! No one should mess with a kid and their bike–glad to hear you got it back!

I loved this story. So cool that your parents got it back for you!

Not really relating to this post (although I loved it!!) but I came across this today and thought, given the them of your blog, you may be interested. http://freakonomics.blogs.nytimes.com/2009/02/13/its-a-boy-with-all-the-extras-you-ordered/

I so don’t remember that day… but that’s probably because we rode so much and did so much other stuff… WAY too much to remember. But then again if we were 10, all memories of that year are practically gone except one 🙁

Thanks for stalking BlogBaby, hope to catch you again! 😉

Hilarious! I love your covert ops mission to get your bike back.

Glad there was a happy ending of sorts!