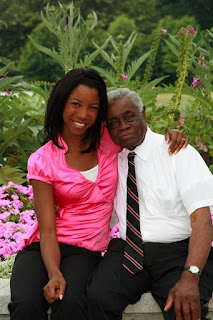 Last summer I had the opportunity to stay with my great-grandfather in Atlanta, GA. He just turned 90 last month! How often to grown people still have great-grandparents alive? I think it would be really cool if we have a child while he’s still around and he’ll have his first GREAT-great-grandchild! Wouldn’t that make a great picture?

Well last summer while I was staying with him he told me a lot about all of his children, and “my mother” as he’d call her but he really meant my grandmother (his daughter).

I wrote down a story he told me the day it happened because it was so powerful to see him, a 90 year old man, still grieve over his children.

Since being here and talking with my great-grandpa I’ve been able to put two and two together about some things finally. It’s like playing connect the dots. I can take all of the stories I learn about my grandmother’s childhood, and before she was born, and stick it to everything she’s told me, and everything I already know about her in her adult age.

Not many people get to hear first-hand stories about their grandparents growing up as rebellious children from THEIR parent’s perspective. I swear my great-grandpa could go on for days about his life. Today I heard a few shocking stories. One being how he remembers his mom having to sand down their floors so he and his siblings wouldn’t get splinters playing on the hard wood floors.

His wife of forty years passed away nine years ago. “She was the love of my life” he tells me. This was his second wife. His first wife and he split after ten years of marriage. His children all have grandchildren, and none of them visit him much. So he’s pretty much a lonely man with a lot of stories bottled up. I woke up this morning and I had planned on going back up to the station to edit a story together for my tape. I wasn’t planning on staying at home for long, and I was working on my paper resume when he came in.

Loving his company, and knowing he loves mine, I started to show him pictures on my computer. I was showing him some pictures of a dog show I went to and it reminded him of the dog he had. So he brought in a box, full of pictures of his family. They were all in frames. The box also had about 20 empty frames at the bottom. He said he planned on putting every one’s picture in each frame but he hasn’t gotten around to it yet.

I saw a picture of one of his sons—my great uncle. I knew he had died but I didn’t know how. I never knew how my older relatives died, and I really never cared that much until this summer. I had always just assumed they were old.

“How did he die?” I asked. This is becoming a common question of mine. I immediately knew talking about this death wasn’t going to be easy. I could tell by the look on his face.

He told me he wasn’t sure if he should tell me. He didn’t know if my grandmother would want me to know. I was beginning to wonder if I really wanted to know. But my curiosity got to me.

“Is it scary?” I asked. He nodded.
“Did it have to do with a car accident?”
“No,” he replied.
“Does it happen to do with devils?”
“What?” He looked at me confused.
“Devils?… Was he possessed?” I added.
“No,” he told me. I was happy then. I could handle just about anything
else. But then I thought of one other possibility.
“Was he murdered?” I asked again.
“Maybe,” he replied. “I’m just going to let you read the article.”

I knew this was going to be hard for him so I told him I didn’t have to know. He told me he would go out of the room if he had to. He handed me the newspaper article. “DEATH WISH–HE KILLED THAT HE MIGHT BE KILLED” the headline read. I read on… The article described the horrible day when my great uncle shot and killed his mother, a man working in his home and a bank teller. He also shot his step-father. Then a SWAT team member shot and killed him while he was in the bank. The article said it was his death wish. It said he was a loner, not very social, and instead of doing a private suicide he did this. I was so sad.

“Do you know why this happened?” I asked my great-grandpa. Stupid question I know.
“No,” he told me.

He went on to explain how he had been a part of a sort of black panther group but came back and was always really quiet after that. Growing up he had lived with his grandmother (one of my great-great-grandmothers). He told me how he was just down the street when this happened and he didn’t even know it was going on. Another one of his sons called him and asked if he knew what was going on. He didn’t, and so he told him to sit down and explained what happened.

I was still in shock.
“Wow, that’s so sad,” I thought out loud. “He killed his mother.”
“I know I shouldn’t keep these things,” my great grandpa started. And he
started to cry.

I hugged him and told him it’s ok. I really didn’t know what to say. I had just learned of a secret my family has kept from me my whole life. But not only that… Just knowing that my 88 year-old great-grandpa has four children and he’s already outlived half. One just died of cancer, another I’m told, seems to be irresponsible an immature (although he’s 65) another is my grandmother who lives across the country in Nevada, and the last killed his own mother and then himself.

It’s very rare you see a grown man cry. And this was hard for me to bear. My great-grandpa seems to be a happy man, “especially since you’re here” he tells me. I decided to take the day off and hang out with him all day.

I can’t imagine what it must have been like to have a life changing experience such as he did. I guess children are entirely life-changing miracles bringing the bad in with the good.

This post sets me in awe. It’s amazing to me how we all come into this world as smiling bright little children and because of the corruptness in this world some of us turn ugly on the inside. What also amazes me is that when we have the ugliness grow that we believe no one cares about us and then resort to awful actions to make us think we’ll be happier when we’re through. I’m sorry to hear that this happened in your family. There is ugliness in mine too. Isn’t it such a blessing to know that Heavenly Father has kept us from experiancing such things?

What a powerful story. It may have been a cathartic experience for him in sharing it with you though.

Just found your blog not too long ago and very much enjoying it!

That’s a sad story to tell and unfortunately I’m thinking there may be more and more of those stories in just about everyone’s family whether distant past or more recent, known or hidden; I know I have one similar to that in mine (involving my mom’s oldest sister and her estranged husband).

Sorry this happened to your family. How tragic. Unfortunately, we cannot change it, but we can learn from them and pray it doesn’t happen again…

I think the fact that you were able to share these stories and the time with your great grandfather is a TRUE gift. I lost my great grandmother about 7 years ago (my last Great-grandparent). Thankfully, she was able to meet my sons before she died.

BTW – I want to check his birth certificate! hahaha He looks INCREDIBLE for 90! You Go, Great Granddad!