The Economy is Effecting Pregnancy Plans 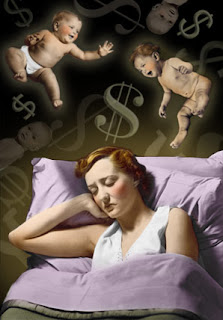 A friend of mine sent me a story from MSNBC and it really made me stop and think… I’m not alone.

The economy is taking a toll on everyone, and it’s making people like myself think twice about “the right time” to expand our family. We’ve been hit hard this week with economy problems. I hate it but I really feel like it’s putting a damper on my plans.
*note added 1/30 By “damper” and “hit hard” I mean we’ve recently gone from two incomes to one and I can’t imagine going from hardly taking care of myself to taking care of a whole nother being… Not to mention the stress! BUT I if I get an impression that having a child is what I’m suppose to do right now, I imagine I’d be able to take that leap of faith.*
Here are some interesting parts of the article I found:

Birth rates do tend to drop in times of economic uncertainty. There was a dramatic decline in fertility rates following the Great Depression in the 1930s, when, for the first time in U.S. history, women went from having an average of three children the previous decade to two.

In each year after the country’s last four recessions, general fertility rates — calculated as the number of women of child-bearing age per thousand who gave birth — dipped slightly. For example, in the year following the 1973-1975 recession, fertility rates dropped from 68.8 in 1973 to 65 in 1976…

Without a doubt, in good economic times or bad, raising a child is an expensive proposition. According to “Expenditures on Children by Families,” an annual report put out by the U.S. Department of Agriculture, a middle-class family making more than $77,100 will spend nearly $300,000 raising a child from birth to age 17 — and that doesn’t even take into account college tuition or inflation.

And here’s a story I found to be so interesting:

Michelle and Paul Anderson, two Seattle-based high-tech professionals, were delighted to learn they were pregnant with their first child earlier this year, until they both found themselves laid off from their jobs and paying out-of-pocket for health insurance.

Friends and relatives, cash-strapped themselves, haven’t been able to help with baby gifts as much as they anticipated. “Being pregnant makes this very stressful on both of us,” says Anderson. We have trouble sleeping and we worry all the time.”

I can’t believe that!… But I can. Times are tough and it’s scary/hard enough to bring a soul into this world, imagine not being able to support a family.

It makes sense to me… The correlation between the bad economy and lower birth rates. Would it change your plans? Some people say “What’s one more mouth to feed?” And other’s say “You’ll never have enough money anyway.” Regardless, tough times make for tough decisions when it comes to growing a family.

It’s really going to take a giant leap of faith in order for me to take the plunge with times being the way they are now.

Let me know what you think vote in the poll on this topic and feel free to elaborate in a comment.

You can read the full article here.

Gotta put in my dos colones here. When we were having our seven children for some reason we never quite looked at the big picture, lucky for them. We had faith the Lord would provide, took a vow of poverty and went on having kids. Do I tell my kids to have large families? Heck no! Does it take faith to have children right now? Heck yea!

Well, I personally don’t want to have kids right now, with all the uncertainty surrounding my husband’s job. But if the Lord asked me to? I’d have to trust He has bigger plans. Tough to stomach, I know. But you have to do what’s right and trust everything will fall into place.

We have 5 kids and a set of twins on the way, and I wouldn’t trade them for the world…Ben and Jerrys ice cream…well that’s another story.

We have faith and live within our means.

I want 4 kids. I’m not thinking about the economy. I put it all in the Lord’s hand. Sometimes people plan & plan when they are going to have kids & when the time comes they learn they can’t for some reason or another. That’s why I say have as much as you can now.
When times get ruff the Lord will provide away. My husband was child 9 out of 9 with only 1 parent working. He wore a lot of hand me downs, but the love in his family is very strong.

I must say that it really doesnt HAVE to cost that much… you dont need everything there is out there for a baby, they dont care if they have name brand clothes or all the fancy equipment…. hahaha- im just teasing with you! When you DO get preggers, you can rely on me to send you some fun stuff to help ya out!

I wouldn’t let the economy bother you to much. Whether we have money or we don’t, whether we plan for a baby or we don’t, God will send the baby at the right time. Even if we don’t think it’s the right time. He knows better than we do and I say if you’re ready and it feels right go for it. Everything happens for a reason even if we don’t realize what the reason is until years later. One things for sure…my third little guy or gal is coming as soon as we are able to work out medical bills. Once those are paid for another mouth to feed really isn’t a big deal.

I agree with Goldigirl. The Lord’s hand is in everything and His timing rules over the country’s economic crisis every time.

My husband and I recently decided to start trying – in spite of the economy, in spite of the looming recession, in spite of his recent lay off. . .
He was/is worried, but the way I figure it, there’s very little we can do about the economy and we have no way of knowing what will happen, so why worry about it enough to put off our baby making plans? I’d love to hear this from a guy’s perspective though!

Hey Jennifer. So this is such an interesting topic. As a young mother myself and as a wife to a professional student, I have contemplated this as well. Obviously, we did make the leap and we have our darling daughter that we are so grateful for. I think that it is essential to analyze finances before contemplating pregnancy. With that said, I also believe that having a baby can be a expensive or as inexpensive as you want it to be. We have used lots of hand-me-downs and just gone without a lot of the extras. This is where I think a lot of new moms have a hard time distinguishing what is necessary for baby & new mommy and the bill can add up fast if you’re not careful. At first I was a little envious of other new moms who had the cutest baby furniture or the best post-pregnancy wardrobe (and every once in a while I still have a little jealousy creep in), but for the most part I have come to accept our situation and enjoy the simple things. Sure, we could have waited until my husband finished school and is a doctor so we could afford all of the extras, but I would not trade my time with my daughter now for anything in the world. It is a very personal decision and you should involve the higher power while determining when is right.

I want to know what you’re thinking about the mom who just recently delivered octuplets and has 6 other children. I wonder what she was thinking.

Hey there, I just found your blog and I LOVE IT! I am a happily married woman, married for 4 years and hubby and I are itching for babies as well and had agreed to start this year when we first got married.

However, right in line with this post, hubby got PROMPTLY laid off last month.

SO, as you can guess, our plans are cancelled indefinitely. But we arent discouraged, as a matter of fact, we feel that this set back actually is fast tracking our plans to be a work-at-home family. He is currently setting up his business and I am working on mine while i continue with my full-time job. Hopefully, by the end of this year, we will be at a place where we can move (we wanna go south, we’re in MD right now) and “start” our family next year. This economy is a trip, but it will NOT break us or anyone else out there who truly wants to bring a child into this world (or adopt one).

I wouldn’t let the economy bother you to much. Whether we have money or we don’t, whether we plan for a baby or we don’t, God will send the baby at the right time. Even if we don’t think it’s the right time. He knows better than we do and I say if you’re ready and it feels right go for it. Everything happens for a reason even if we don’t realize what the reason is until years later. One things for sure…my third little guy or gal is coming as soon as we are able to work out medical bills. Once those are paid for another mouth to feed really isn’t a big deal.