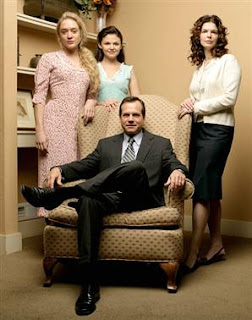 I’m so embarrassed to admit this and I hope I soon give up this guilty pleasure if only to save myself from eternal damnation. I blame it on my reporter antics and intense curiosity… Oh and one of my BYU professors, that’s what got me started on this in the first place.

Ok ok, I’m done prepping you now. Here it is: I watch Big Love. Not only that… It’s the best soap opera I’ve ever seen. I’m actually watching it right now and laughing my head off.

I was at the public library when I saw one of my business professors looking at the DVD section. She asked me if I’d seen the show and I told her I’d only heard of it. She said it was interesting to see other people’s perspective of LDS people. *side note* the main characters aren’t LDS they are secret polygamist people pretending not to by polygamists (you have to see it to understand)*.. Or whatever the show portrays these religious people as. At first I thought it was a documentary of real polygamists, but I soon recognized the scriptedness and the guy from Twister and put two-and-two together.

$3 later I rented the whole first series. I had to fast forward a few times through some raunchy stuff but other than that it wasn’t bad. Actually, I’m pretty much hooked. Now, just as season 3 is starting, I get to take advantage of free cable I get with my job which basically means unlimited TV and of course, HBO.

Anyway, the point of this whole post isn’t just to try to justify my guilty pleasure in near-apostasyness, but to say this: I COULDN’T DO IT! It’s so interesting watching these actors portray what it may be like to share a husband. Their challenges, heartache, the benefits. I couldn’t do it though… utuh, no way Jose. I’m an attention hog and I couldn’t share my man… Although it wouldn’t be bad to have some sister wives to clean the house, cook and whatnot… They just can’t, ya know… Share my hubby in other ways (if you know what I mean). Yea, I’m glad I don’t have to deal with that.

All the other stuff about the wannabe Warren Jeffs is boring to me, but the drama between the three wives all the kids and the husband… talk about ENTERTAINING!

LOL I haven’t seen it YET LOL but I’m sure I will, I’ve heard so much about it 🙂

HA HA HA….. That is so funny!! I have secretly wanted to see that too.

I’ve seen the first season or two of Big Love and really enjoyed it. It’s fascinating to get a glimpse into polygamy, whether I agree with it or not. I don’t think I could do it.

Eelcome to SITS, girlfriend. We’re the Welcome Wagon. This is a small taste of the comment love you’ll get when you’re featured blogger!

I’ve met so many amazing women and read so many fun blogs through SITS. So glad you’ve joined!

It definitly does make us stronger and wiser too LoL! Life is amazing isn’t it?

I watched it until the “Jesus Wants Me for a Sunbeam” scene under the laundry line, if you know what I’m talking about! That kind of warped me in the head 🙂

My hubby and I get comfy each Sunday night and sit to watch this. It’s one of our faves! LOL This season has been great so far!

I was stopping by from SITS! I wanted to come over and give a big HELLO!

I used to watch this show during the first season, when our TV in our bedroom magically got HBO. But it was on late at night, and my husband HATED it. No more HBO, and no more Big Love.

I LOVE this show! Really, I do. It is absolutely hilarious! I am hooked.

And if understand it correctly, the are supposed to be Mormons, just the polygamist kind. But man, is that show funny! Oh, and I love Bill Paxton, anyway (he’s brilliant!), so its all good.

I have never got into the show…cause we don’t get HBO…but I do love drama stuff like that. Even though I don’t agree with it, I think I would watch it.
And I couldn’t figure out where I had seen the guy until you said Twister and it all clicked.

I came by to visit from SITS…..great blog and I wanted to say HELLO….

I have never watched this show, maybe I will have to give some of my time..lol
I have to say also that my husband and I got o St Maarten most years and LOVE IT…such a great island…

Stopping by from SITS! This show is my guilty pleasure!! I watched seasons 1 and 2, but then we got rid of our DirecTV and HBO(I am still in mourning), so now my best friend is tivo’ing the whole thing for me. I don’t get the whole sharing your husband thing at all either. Sharing the housekeeping, yes! Sharing my husband, not a chance!!

I have to say…I’ve never seen it….sigh….but I wanted to say hello…and welcome to SITS…and I am so enjoying your blog…and your writing style……I hope you enjoy SITS…and I know I’ll be back visiting again…

I’m going to have to see if I can rent that now lol It sounds like it definately has the ingredients for funny.

My inlaws are watchers of this series. I’ve seen one episode, but it was while cleaning and trying to get my two Wild Indians settled for bed.

I found your blog via SITS, and really enjoyed reading your posts. I’ll be back!

I would HATE to share my husband with other women. Though I wouldn’t mind sharing chores like cleaning the bathroom or grocery shopping.

I have heard this is great, a lot of people tell me I should watch it, so I wouldn’t feel to guilty for it

I have never seen this show but it sounds so interesting and I do love me a good soap opera. I may have to rent it and watch from the beginning.

I am really liking your blog and I also wanted to welcome you to SITS.

I saw the link to your blog on the Myspace Black LDS group and decided to stop by. I enjoyed it so much that I also started following the blog on Facebook.

I’ve never watched this show but I’ve enjoyed reading your posts and can relate to some of them especially the one on your worries of raising biracial children. I am a new mom and my daughter is half black/quarter white/quarter mexican. My main goal for her is that she accepts and loves herself for all that she is. Stop by my blog sometime I can’t promise you that it’ll be as interesting as yours but I hope you might enjoy it.

totally couldn’t share my hubby either. I am SO the jealous type.

Hubby and I have been getting them on netflix (no decent TV out here, LOL!) We’re watching the season 2 finale tonight. We have been really enjoying it–and had a few interesting discussions about the pros/cons/logistics of polygamy. We also decided who we’ll ask to be our next sister-wife if we ever have to live “the principle.” ROTFLOL
I’ve been thinking I should write a blog post about the pros/cons/logistics…but I’m not sure if I’ll get hate-mail comments about it! But you see, now you’ve made me brave. If I can say that some kids are not cute, then I can talk about polygamy, right?!

I’m totally addicted to the show too. I rented the first 2 seasons from Netflix and was dying until this season started. It’s the best tv soap opera drama on in a while. I think anyways.

I’ve only seen the show once or twice, but I love trashy shows, like Keeping Up with the Kardashians!

So, I know it’s been two years… the half-written post has been sitting in my drafts folder for most of that time. BUT, I did finally finish writing it. It’ll post later this month. 🙂