That’s what I tell people at least when they ask how we met, but the truth isn’t that simple. It’s actually a long story, which is why I revert to that answer when someone asks because I know I don’t have time to tell our entire meeting story, and shortening it up any other way may leave people thinking we’re weirder than we are.

Since I plan on printing this book out as a hard-backed journal one day, and because I think the reason we met could be because of come cool posterity we’ll have I’ve decided to document the full story here.

Nearly six years ago I was finishing my first semester at Mesa Community College. I was at a rough spot with my mom and didn’t want to live at home anymore. I wanted to move out and live with LDS roommates. I Googled that term and back then “Single Saints” was one of the sites that came up. I had to register to get on the list of people searching for roommates. I filled out my profile and let it be. I ended up finding roommates through the LDS institute and actually not moving out at all.

Meanwhile, “connection” requests and emails came though my then Hotmail junk mail box. I didn’t respond to any of them, in fact I just deleted most of them without opening them up after realizing most of them said things like “You’re so beautiful… blah blah blah.”

One day I got an email from someone singing a different song. It said “I just came across your page and you seem very intelligent,” or something to that effect. He had no picture to go by, only the name “Dagolfa.” But the message was so different than the rest of them that I had to write back.. But I kept it short. I told him “thanks, but I’m really not that smart.”

He wrote back saying something like “You are smart, you know what you want to be, you graduated high school early, don’t sell yourself short!” So when I wrote back again I asked him about his mission and family. His mom was from Atlanta, he served a mission in the Caribbean, and with a name like “Da-Golfa” I had pictured in my mind tall, dark and handsome.

We didn’t write much… if any after that. In the messages he had said it was cool I was moving to Provo because he lived in Orem… I had no clue where that was, it could have been hours away for all I knew! So I thought nothing of it.

A little after moving to Provo I had made friends and started dating a few guys…Nothing serious but just fun dates. I got a phone call one day from Him–Who was he? Huh? I searched my email account for that name to figure out which stalker had hunted me down and found my number. Oh… The cool one. ‘Ok, that’s nice, but I’m not interested.’ Is what I thought. I talked to him for a little while then told him to call back that night around 9 (I knew I’d be on a date then).

I had a date set up with one of my friends and my cousin, I just needed a date. I had three guys in mind, it was just a matter of who was available. I left messages with a few of them then my roommate proceeded to use the phone for what felt like hours while I MISSED my returned phone calls (this was pre-cell phone for me). I was so worried my plans would be ruined. The moment she hung up the phone it rang… I knew it was one of my dates calling me back… But no, it was DaGolfa. Desperate, and knowing it was now or never I asked if he wanted to go out with me… That second. Coming to my rescue he said yes.

While I waited for him to arrive I panicked. What if he was a killer?–Or worse, ugly? I remember walking out of the dorm apartment with my cousin and passing a man walking towards my door. He was white, short, and round, wearing a white shirt and tie “Is that him?” my cousin asked me. “I don’t know,” I replied honestly. ‘I hope not’ I thought.

We walked to get my friend from her dorm apartment and when we got back to mine I heard my roommates talking to my date. My heart raced as I walked down the seemingly long hall toward the kitchen where they were. When I peaked around I was pleasantly surprised. The first thing I noticed were his big, very round, very blue eyes. He didn’t look anything like I imagined but I thought he was pretty cute. As we left I turned around and gave my roommates the thumbs up.

Two days later he was my third date in one day, but that night I decided I liked him the most 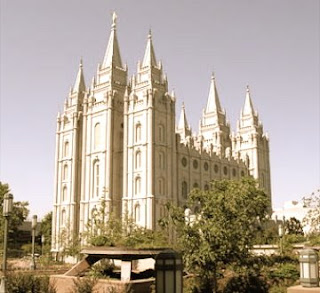 and would only date him. Two weeks later I knew I’d marry him and exactly six months after our first date we were Married in the Salt Lake Temple.

Now going backwards a little to his side of things… He’s never really been a computer person. In fact, he recently just joined Facebook. The reason he didn’t have a picture or information on that site is because he had signed up just to write to me.

He was Googling things about black Mormons for a friend on a mission and came across my picture. He started to write to me, then thought he was crazy and started to delete it. Then he said he just felt like he should send it, so he did. He didn’t know why, or even think I would write back. Little did he know he was writing to his future wife 🙂

Although I don’t remember it–He says I wrote him an email with my phone number and that’s why he called. He said the night I told him to call me back at 9 he had almost forgot. He was in bed (he had work at 5am), had his contacts out, and saw that it was 9 o’clock and gave me a call anyway, he wasn’t expecting me to ask him out but he was happy I did.

I remember talking about our whole story a little after we started dating. It seemed so bizarre how everything had worked out just right so we could meet each other when we did. A couple of his friends asked how we met and we had said “online.” After seeing the looks exchanged, we realized how strange that must have sounded so we decided to shorten it up… We met at BYU on a Blind Date… Set up by us is the part we usually leave out.

But when I think about all that it took to get us together and how easy it was for us to know we were going to get married (literally after two weeks) it’s mind boggling. When I prayed about marrying my husband I knew without a doubt that I should marry him… And that knowledge has kept me from ever doubting if we should have gotten married.

I hope I’ll feel the same way about having kids… The surety feeling, of knowing it’s the right time. To be honest I have felt that way before… About a month and a half ago, but I don’t feel it anymore. I’m not sure if it’s come and gone or if other things are just getting in the way. Either way, I’m glad I met my husband when I did and that we’ve had so much time to spend together as a young married couple. And I’m excited to see where we go from here.