The Day Steven Spielberg and I Had a Moment

Chapter 3 | Steven Spielberg and I Had a Moment

“No need for your cameras. There’s one person taking photos during the Steven Spielberg interview.” 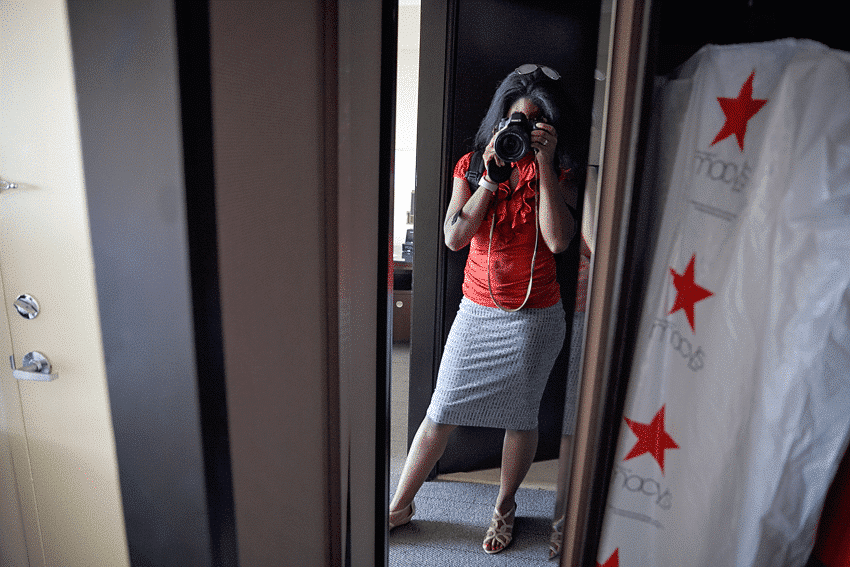 These words were a shock to the system for someone who has a DSLR permanently attached to her at all times. Nevertheless I swallowed my pride, suppressed my control-freak tendencies, loaned my Canon 24-70mm L lens to my new friend and camera buddy Coralie, and decided I would enjoy the moment without needing to be behind the camera.

Let me tell you what, if I didn’t do that I may not have had my special moment with Steven Spielberg.

When I walked into the room where 24 other bloggers and I would be interviewing him I found a seat in the middle of the group. It was maybe seven to nine feet away from where he’d be sitting. I sat and waited. I guess you could say I visualized some plays in my head. 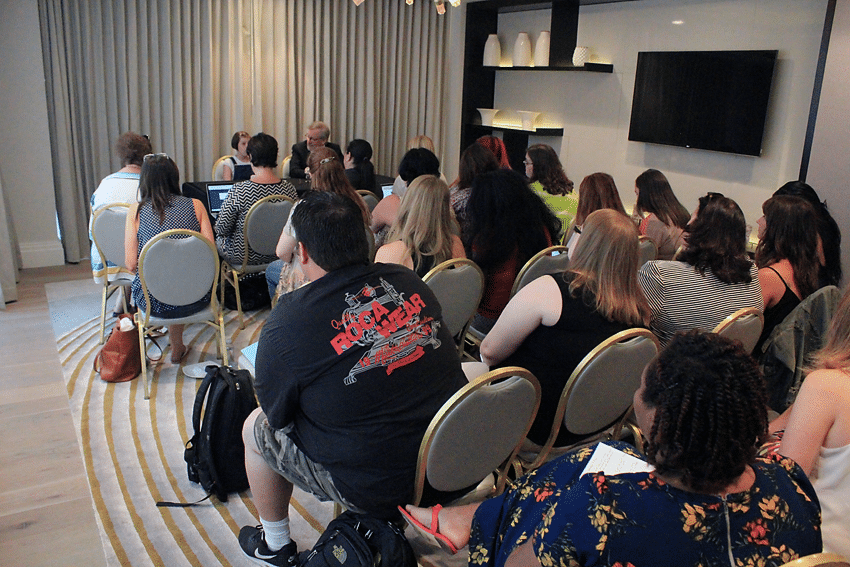 “You probably won’t get a question in,” a couple of people told me at breakfast that morning.

I was a newbie amongst 20 Disney interview pros and apparently they didn’t know who they were talking to.

I had a lot of press conference experience in my past life as a reporter and there tends to be a lot of shouting and talking over one another to get noticed. This was a more intimate interview but I wanted to be ready for anything.

We got a 2-minute warning that Spielberg and Ruby Barnhill, who plays Sophie, were on their way. Moments later they walked through the room and we greeted them with applause. 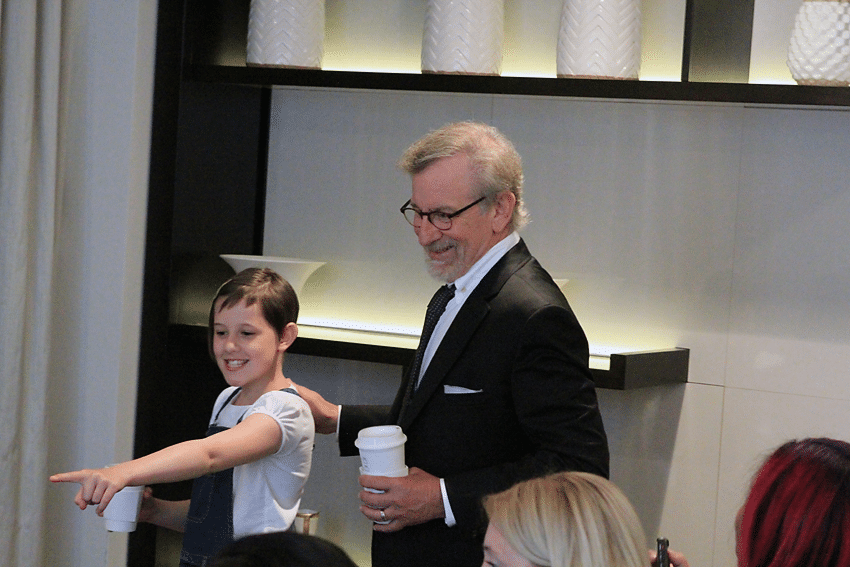 Spielberg guided Ruby to the chairs with a hand on her shoulder. Both of them looked exactly how I’ve seen them in countless interview photos yet here they were in the flesh.

I don’t really get star struck easily. I always think I will be but then when you meet a celebrity in person you quickly realize they’re just like you.—Except way more famous and in much nicer clothes.

They sat and we were practically face-to-face. I mean, in my mind we were and really we might as well have been, well let me just get to the point… 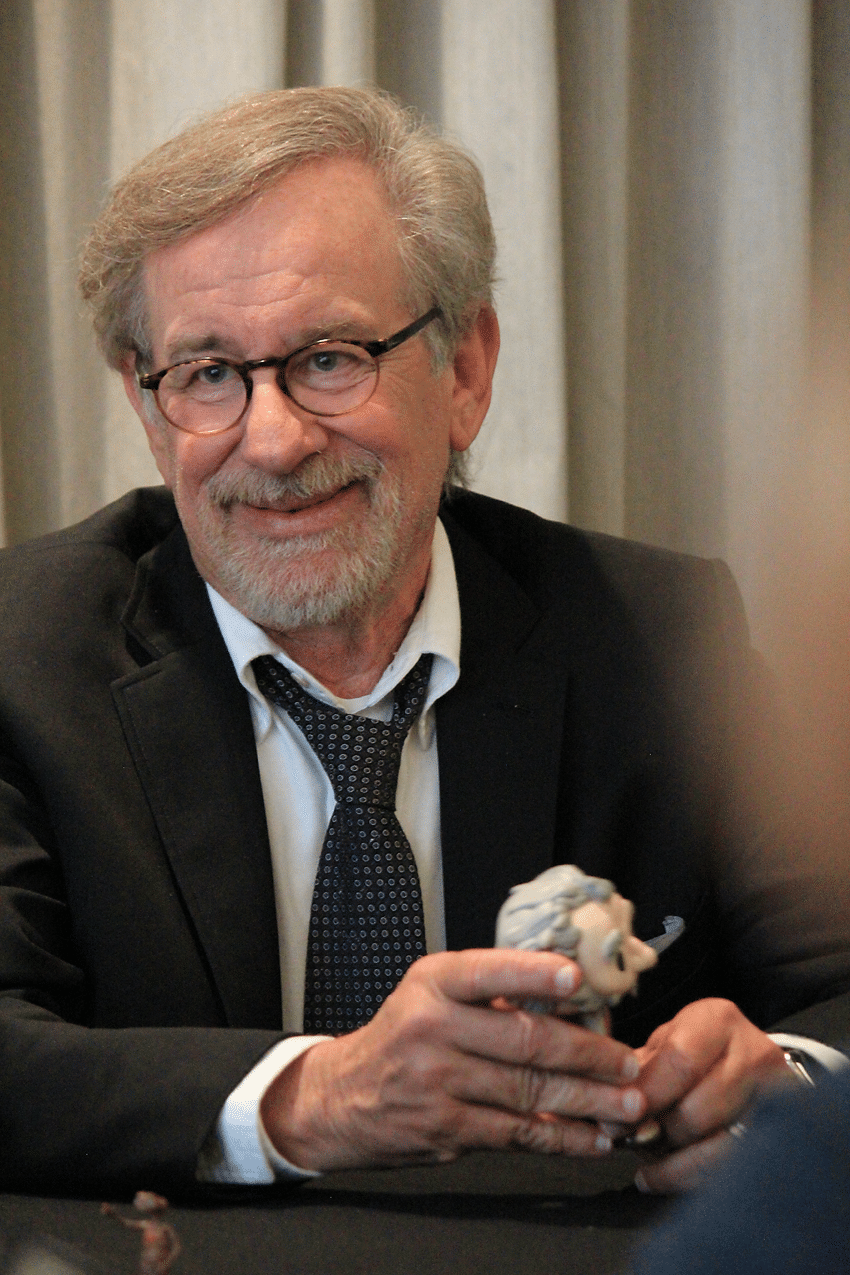 A few people threw out questions and Steven and Ruby immediately warmed up to us and we laughed as she recalled how she felt when she found out she got the part.

“I was so, so excited,” Barnhill said. “I’d always wanted to be an actress.  I’d watched [my dad’s] plays, you know, since I was like three or four. And so it was really, really amazing for me to experience.”

Spielberg even told us Ruby’s dad had a cameo in the movie before going into his own feelings of excitement about casting Ruby Barnhill. He had been searching for his Sophie for eight months with no luck.

“I was about to compromise when all the sudden I saw the audition that Ruby Barnhill and her parents had sent in and, my whole life changed for the better in that instant,” Spielberg said. “Everything was okay with the world.”

He smiled as he told us he in the middle of shooting Bridge of Spies and didn’t even care about it at that point. 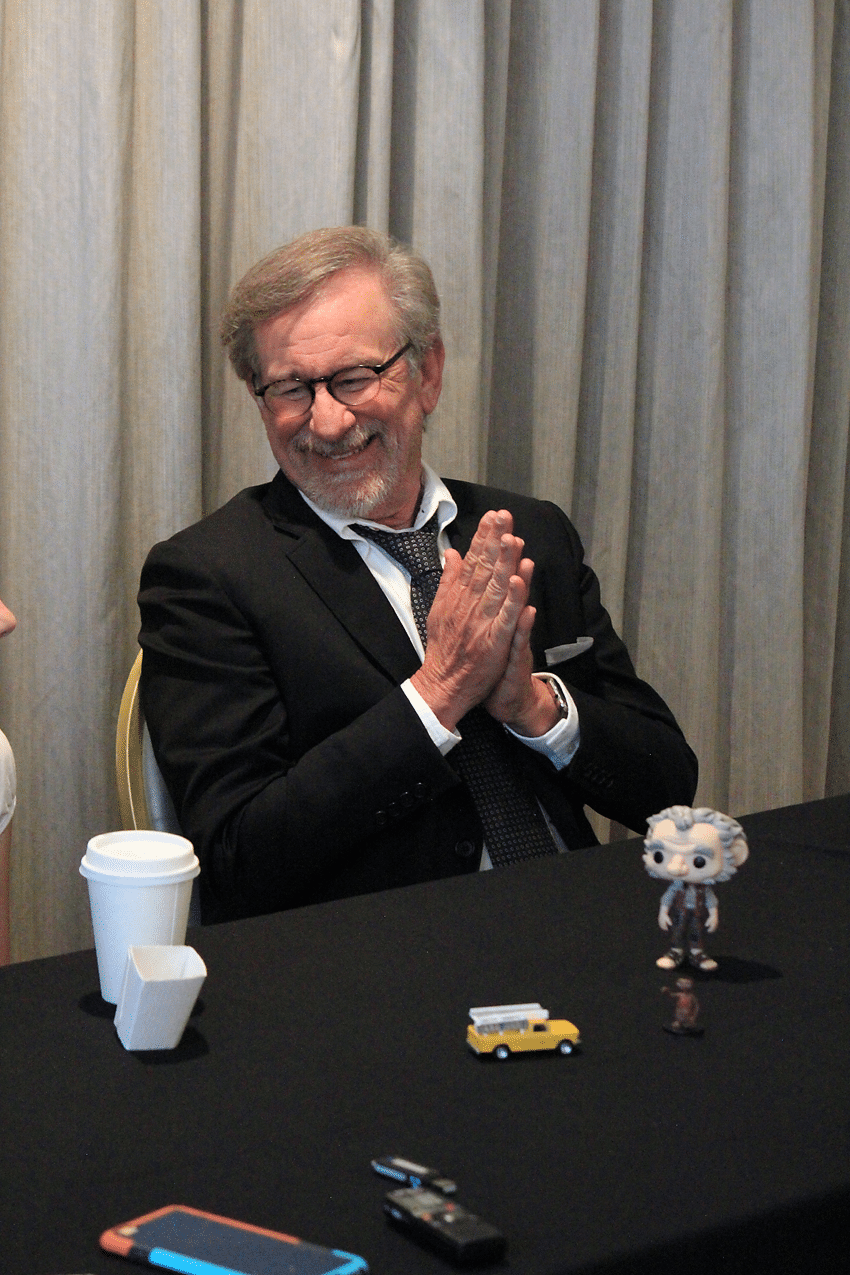 I was completely swept up in the moment, but time was flying and I had a couple of burning questions inside of me that I needed to get out.

Our organizer gave us all a one more question warning, but Spielberg overruled, and said we could have three more.

“What was your favorite part in making the film?” I asked both of them, but looked directly at Steven. He looked back at me and considered his answer, then let Ruby go first.

“It was really nice, because I got to act every single day, which I had wanted to do my whole life,” 11-year-old Barnhill said. “And so, that was really, really great. It was always so, exciting. You know, it’s just there’s such like, a magical feeling on set.”

She said it was so fun to be directed by Steven Spielberg and work with Mark Rylance.

“I really enjoyed myself,” she said.

Spielberg smiled as Ruby gave her response and gave her a hug as she finished. Witnessing the friendship between them was sweet. 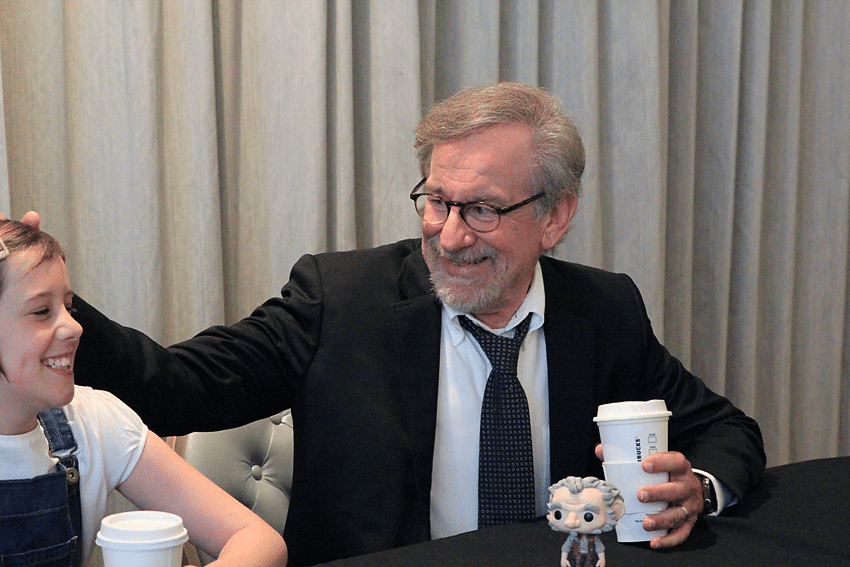 Then he looked back at me to give his answer.

“Every time there was a scene where they were in conversation with each other where, where Sophie’s courage was growing,” Spielberg said. “Any time they were engaged in any kind of conversation all those scenes were my favorite scenes.”

I thought it may be a little rude to ask two of the last three questions but I considered it anyway. I had too many good questions and I didn’t want them to go to waste (though we still had two more interviews to perform with other stars of the film… More on that later).

Luckily another blogger asked one of the questions that was eating me up.

“What do you want this generation to get out of the movie?”

And this is when Steven and I had a moment. 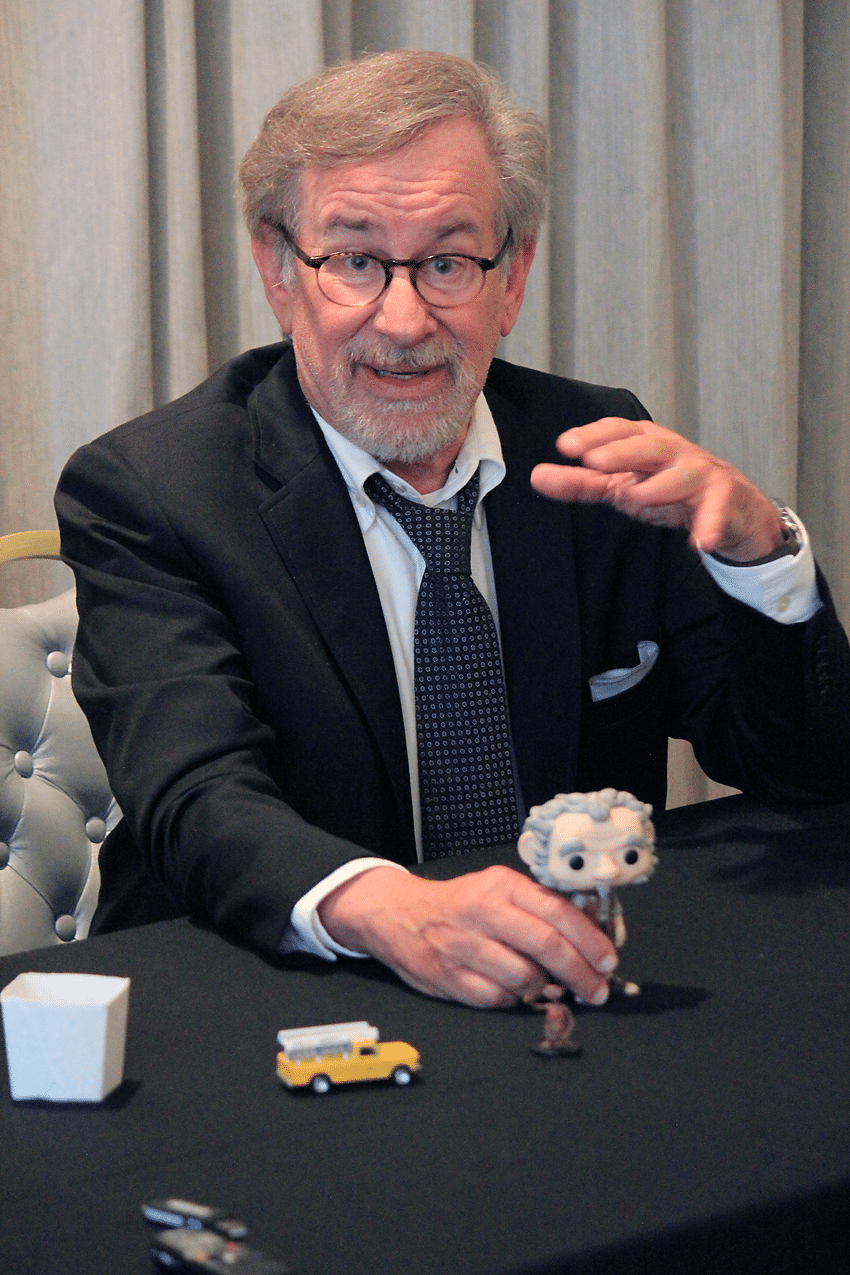 Maybe it was my loud “YASSS!” In response to the start of his answer, maybe it was the fact that my eyes were boring into him, or the fact that I was doing everything short of raising my arms up and doing a praise dance at his reply. Or perhaps it’s the fact that I’ve believed and preached this same sort of optimism my entire life. Whatever it was. It brought us together. In that moment.

I wanted to jump out of my seat and give him a hug but I was certain that would exclude me from ever getting invited on one of these Disney press trips again… And maybe even give me a date with the security guards.

I couldn’t control my emotions though as my hand which went straight to my heart in agreement.

“That’s what I hope people get from this,” Spielberg concluded. And in that moment, without him knowing, he became my new BFF. 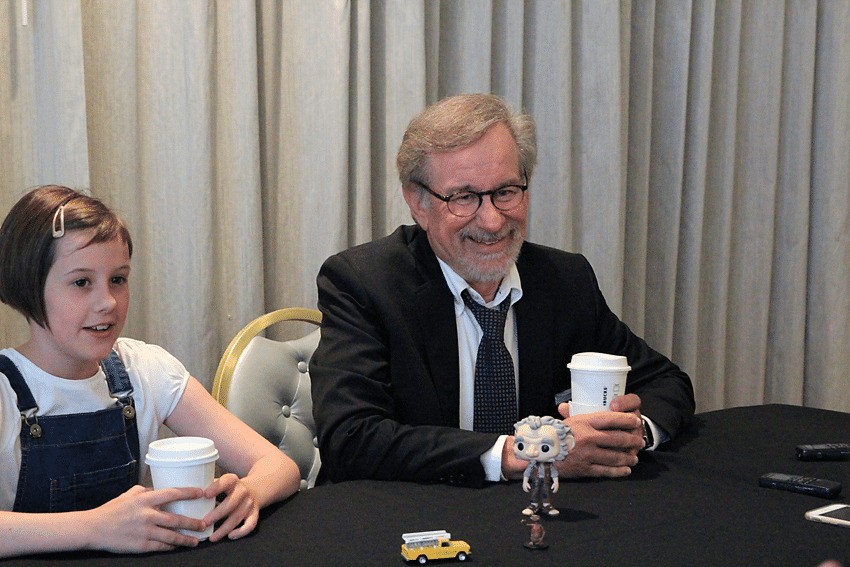 This message of love and compassion for one another, even if and especially when we’re different.—It’s a message I’ve always had in my heart. I often call myself a helpless optimist because I truly believe it’s possible. And when a legend like this tells you the same and hopes that his movie will make more people aware of that… One can only hope more people will listen.

I couldn’t forget about Lil’ J, who rattled off her own questions for little Ruby before I left.

As we headed into the next room to take a group photo, I commented about the snozzcumber scene, wondering what that was like.

If you’ve read the book you know Sophie hides from a big scary giant inside a big disgusting vegetable only found in Giant Country. Ruby laughed when I said that was cute and would probably be my daughter’s favorite part.

“What was that?” I asked later when I saw her at the premiere, totally curious.

“Oh I was really in it,” she said. “A really big thing!” She waved her arms around helping describe what I can only imagine as an actual giant snozzcumber.

I told Lil’ J and she was giddy with excitement. I can’t wait for her to see it. 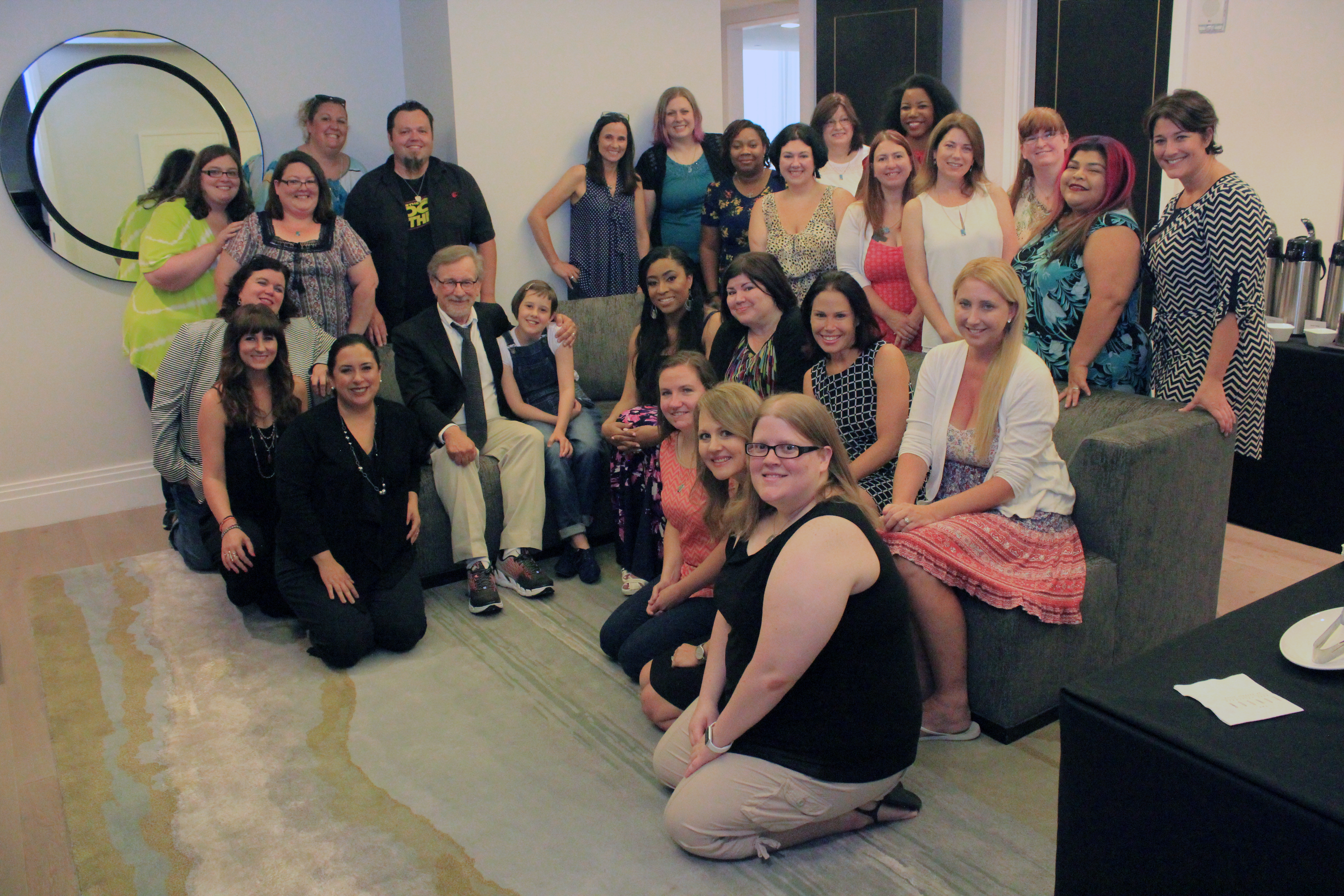 Tall girl problems means I’m in the back. Can you spot me?

The BFG hits theaters everywhere this Friday July 1st. I hope you’ll take your kids to see it. And talk about the message of love and acceptance with your kids.

I can’t imagine what an amazing experience it would be to be in the same room as Steven Spielberg, let alone speak to him! Wow! What a life experience that was. 🙂

I love reading about moments like this. It’s so awesome! Good questions. I really enjoyed follow you on social media during this press trip. The movie looks fabulous and I can’t wait to see it.

What an amazing experience Jennifer, so amazing! I also love your logo, so beautiful. Thank you for sharing!

This looks like such an amazing experience. It is always fun to share experiences with others. Thanks for taking us on a little adventure too.

This is just too cool. I would be just as excited to have been in the same room as Steven Spielberg! So happy for you that you were there.

Great story!! I’m so glad you got your question.. And your answer!!! Cannot wait to see this movie with my girls this weekend. Sending you big hugs. 😉

What an awesome story! I love that you got your answer! My kids are itching to see this movie, it looks like it is going to be really good! This is the coolest story I have heard all week! To think you met Steven Speilberg! How cool!

Talk about a once in a lifetime moment! How neat to be able to meet Mr. Speilberg himself. I’m happy that you were able to get your question in in time. His response was golden. Can’t wait to catch this movie!

To my son… You are a gift. Right from the start

To my daughters… My oldest, you made me a mom.

Fun mosquito fact from Ty: It's only the female mo

I got sucked into the LulaRich documentary last we

Our three little Cougar fans! One cheerleader, one

I teared up as I dug through my photo archives for