Like many 4-year-old boys, my son has been counting down to see this movie for many months. Last night we finally reached the finish line and got to go screen Cars 3.

We walked in the theater, his 3D glasses in one hand, and his die-cast Lightning McQueen in the other. I was leery of how this would play out. My son has a hard time sitting through movies, especially the first go around (we saw Moana in theaters several times but he’d heard the soundtrack and that familiarity helped him get through). Would knowing most of the characters in this film be enough to keep him sitting still through the entire movie with dare I say… No bathroom breaks? We were about to find out.

I wasn’t into Cars until my son came along and dusted the movie off from our Disney movie collection. Now that he’s seen every movie and Pixar Cars short more times than I can count, he’s inducted the whole family into the Lightning McQueen fan club. His joy brings me joy. So full disclosure– I don’t have much bad to say. 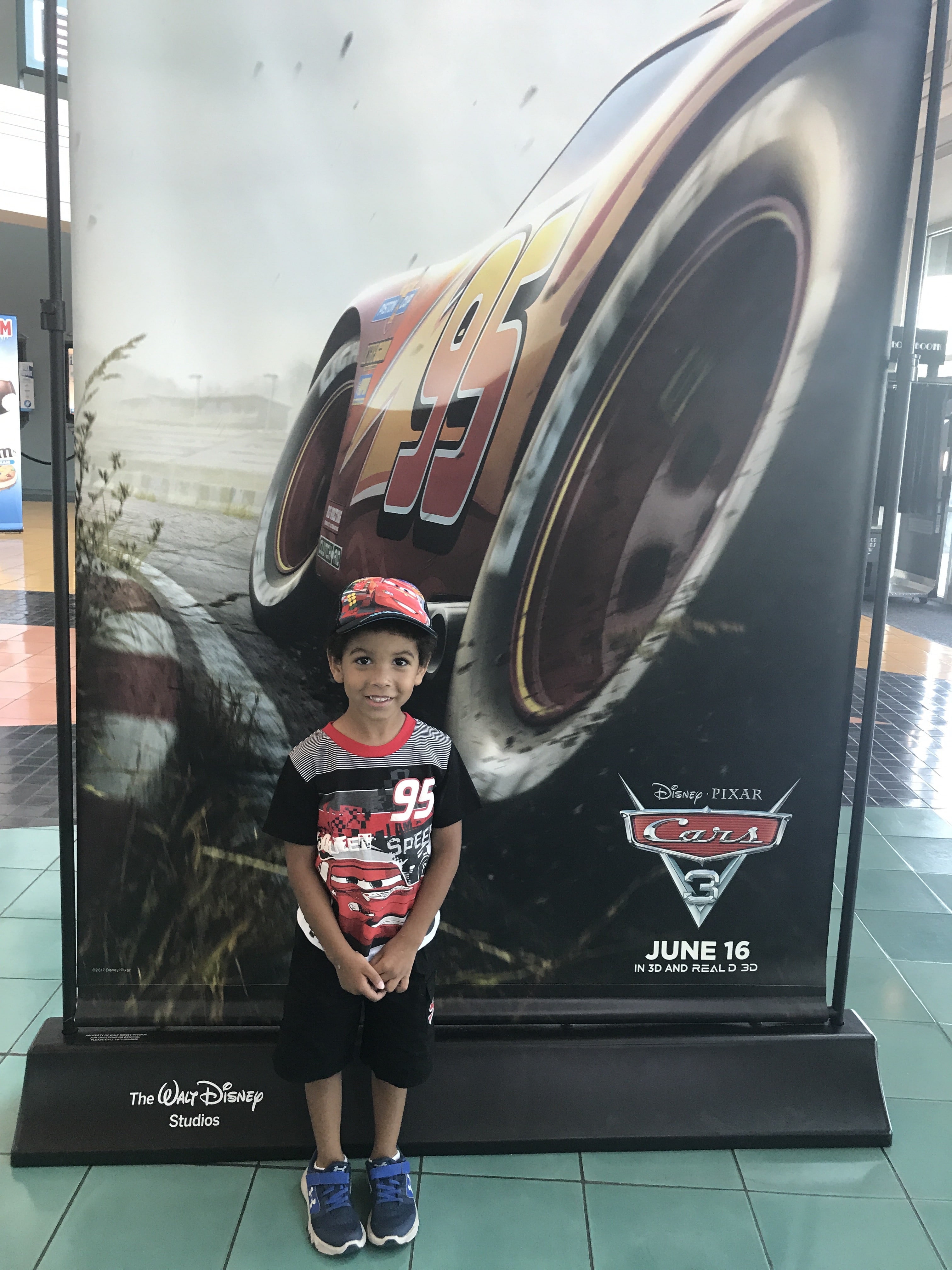 I had the opportunity to screen this short film earlier this year and I already knew I loved it. I also knew it would likely go over my 4-year-old’s head. Not that it’s very complicated. Like most Pixar shorts it had minimal dialogue and the message was conveyed through riveting and emotional animation.

It’s a story about a bully and his redemption after meeting and battling it out with an unusual ally.

It made my 4-year-old laugh, and I whispered to him asking how he thought the characters felt to see if he was grasping the point. It really is a beautiful story with a great moral for every kid about kindness. It’s one of my new favorite shorts so make sure you’re in your seats early enough to catch it. 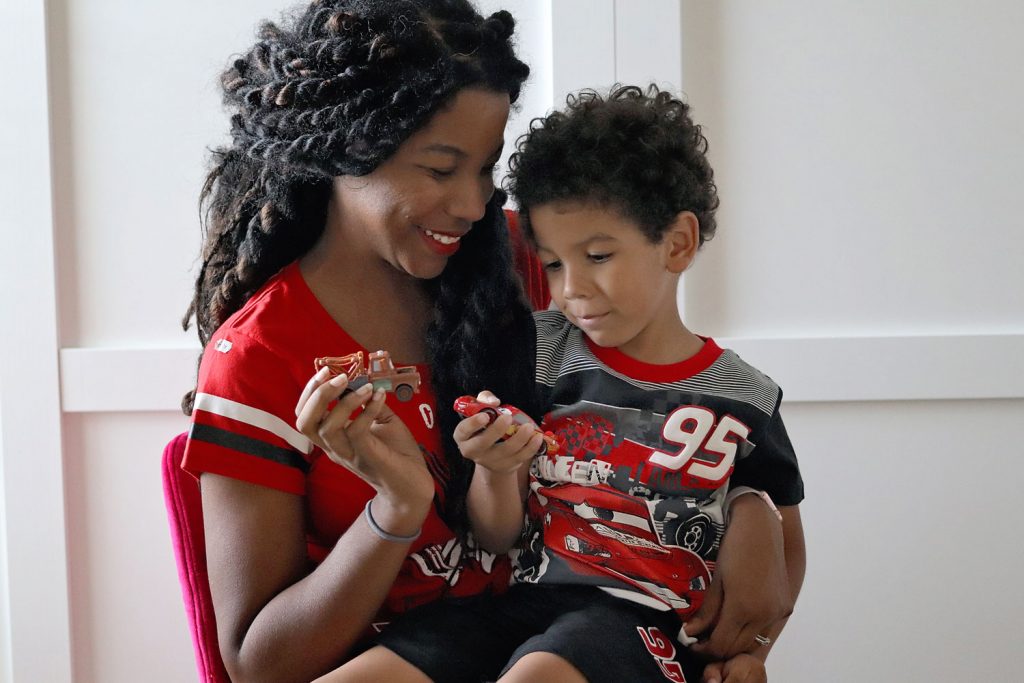 As far as Pixar sequels go I feel like this one was up there. Way better than Cars 2 or Monsters University, giving us a similar nostalgic and flashback feel that Toy Story 3 brought. (Finding Dory is still my favorite).

Beyond that, this movie is rated G. The last time we saw this for a Pixar movie was four years ago with Monsters University. Before that it was 2011 when Winnie the Pooh and Cars 2 premiered. This movie was made for kids, kid laughs and kid enjoyment. I’m happy to say I enjoyed it too. There was less adult humor than you’ll find in Toy Story, and it was way less deep and far easier for kids to understand than Inside Out.

I went into this movie with MINIMAL knowledge of what it was about. I mean, I knew it was going to have a Rocky-type feel, knowing McQueen gets injured and is trying to make a comeback against new, younger and faster cars. After the fact I read some reviews about it being a film featuring female empowerment (or not)–I had no idea this was something Pixar was going for until after I saw the movie. However, given my surprise, I’m totally here for it and was literally cheering along with the crowd.

Cruz Ramirez (voiced by Cristela Alonzo) is a new favorite and certainly one to watch (I can’t imagine there won’t be another sequel after this as they didn’t close any doors).

All that said, we expected Lightning McQueen to be the star of the film, and no funny spy business like Cars 2.

Like I mentioned, the Cruze Ramirez storyline caught me by surprise. I didn’t expect her to play such a big part in the movie. Without giving too much away (as usual, no spoilers), I feel the storyline charmingly came full-circle.–Giving life-long fans of Lightning McQueen a beautiful outcome, but also shining a spotlight on a new character–A girl at that!

Given McQueen’s history at being stubborn and hard-headed I didn’t expect him to be any different this time around. There are challenges along the way where he and Ramirez get into it–and into lots of trouble (these were some of the funniest scenes that had my son toppling over in laughter). In this journey we get to learn more about Ramirez and her past.

While this plot may not win over new fans, I think little girls who were already champions for the movie will walk away enthusiastic about a new character to cheer for. –(We are all going to see it again on Friday morning, with my 6-year-old daughter, I’ll update this with her review).

As the story moves along we meet an older character based on a female racer from the early days of NASCAR. I was pleasantly surprised to learn that, but I’m not sure my son (or daughter) noticed/cared.

Chick Hicks makes a hilariously annoying reappearance as a retired athlete gone “sportscaster.” Natalie Certain (voiced by Kerry Washington) is a respected statistical analyst, except Hicks doesn’t seem to respect her at all.–Cutting her off to make his own jokes. It seemed like a nod to the unfortunate reflection of how women are treated in the male-dominated, misogynistic industry of sports broadcasting. …Or maybe I’m just over-thinking things.

4-year-old translation: Chick Hicks aka “bad guy” kept interrupting a car that may or may not be Holley Shiftwell.

Though I haven’t been anticipating a quality sequel for 11 years, I have been for the last 3, and I don’t think this disappoints. It’s everything Cars 2 should have been, even bringing in flashbacks and a storyline featuring Doc Hudson which absolutely tugged at my heartstrings and had my eyes a bit misty. We got answers to questions about Doc’s past and pieces to a puzzle McQueen needed to move on.

All our favorite characters make a re-appearance and get a moment to shine, from Mack, and Ramone and Lizzie down to the tractors. Mater fans may be disappointed that he doesn’t have as as big a part as he did in the first two films. But as a parent, I found it to be a welcome relief.

The moment Doc Hudson hit the screen my son screamed “I TOLD YOU DOC WAS IN IT!” Right again kid. 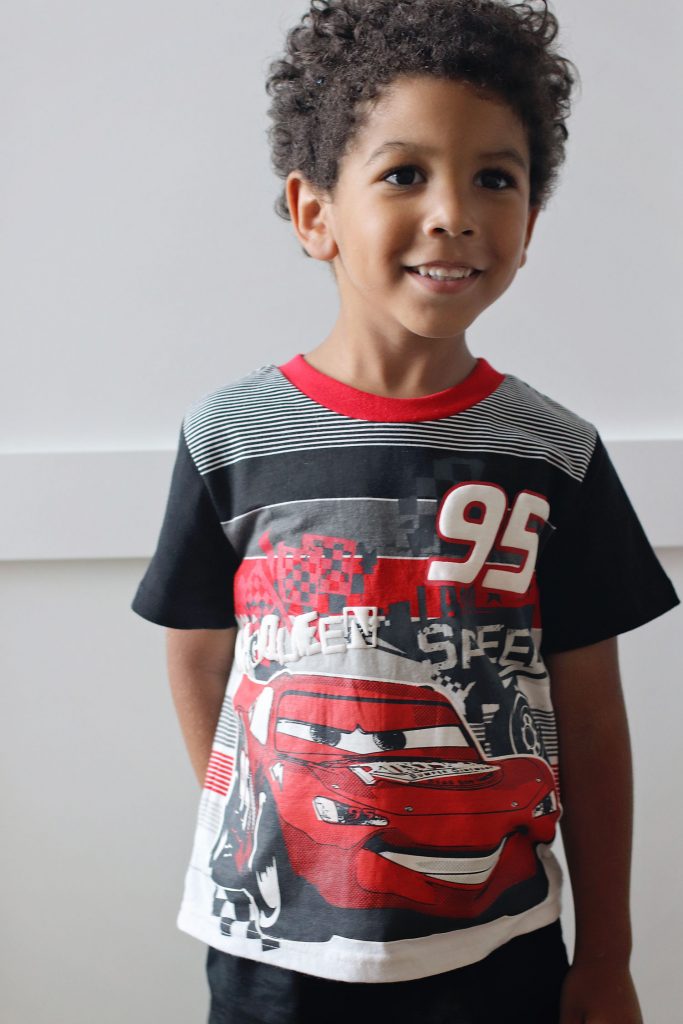 The movie started EXACTLY like it starts in the first movie my son shouted “IS THIS CARS ONE?”

I was able to pull my hand away from his mouth after a couple seconds when Lightning opened his eyes in the bed of Mack’s truck with a friend in there with him.

“MATER?!” My 4-year-old then shouted. I kid you not he was the loudest kid in the theater. Totally into it.

He laughed and laughed during several parts of the movie, and he came home telling his sister about his favorite part–Watching Lightning McQueen dance.

During the movie, he pointed out things I hardly noticed, like Lightning McQueen spray bottles. And he asked me to repeat what was said a couple of times when he missed a joke. My wiggly 4-year-old was captivated like I’ve never seen before, and that in and of itself was a win.

Having seen the first trailers oh, 567 times, my son knew who all the characters were. The second Rookie Jackson Storm blew by he shouted his name. My husband bought him a random set of the new die-cast characters. Some of them literally named “Rookie 1, 2, and 3”. I criticized my husband for getting plain grey cars with no real names. But they totally have a part in the movie. My son was happily exclaiming “I HAVE THAT ONE!” throughout the movie.

Do you want to see it again? I asked. “YES!” He said, without skipping a beat. And we will, in a couple of days.

And lat night when I tucked him in, instead of putting on his favorite Nemo PJs he insisted I let him sleep in his new Lightning McQueen outfit. It left a mark my friends. 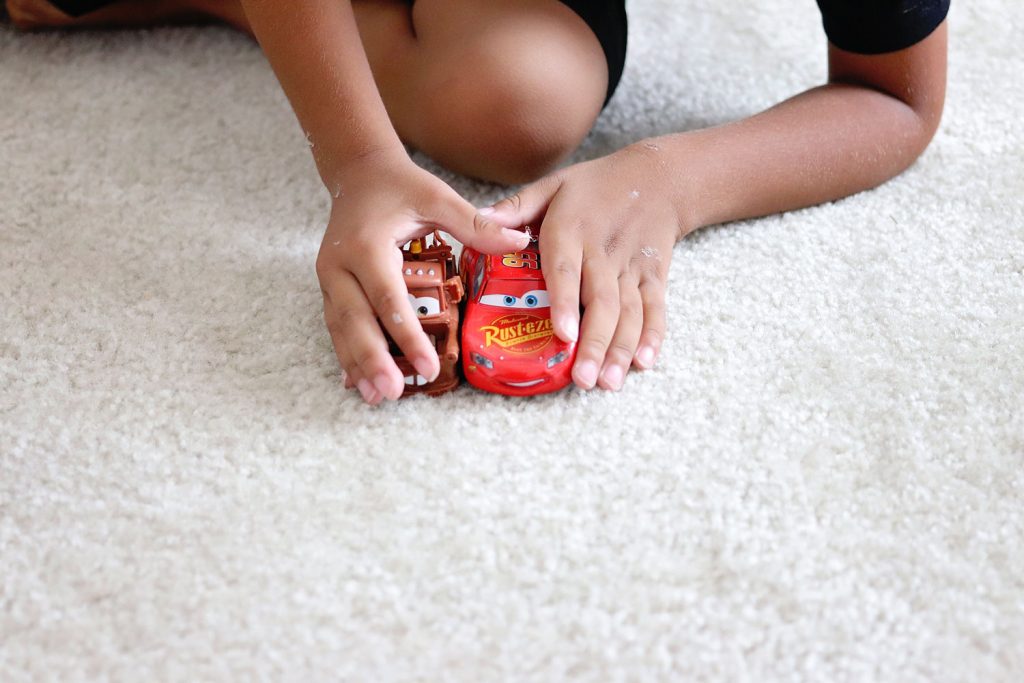 Scary Scenes and After the Credits

There isn’t anything very scary in this movie, so I’d say it’s great even for kids who startle easily. When I asked my son he did say that the school bus (during a demolition derby scene) was scary and that he wanted to “hit it” but he wasn’t the least frightened during the film.

Like in many Pixar movies, if you wait until after the credits you’ll get a little bonus scene. This one wasn’t much (I didn’t find it worth the wait) but it may be a treat for big Mater fans.

Cars 3 will happily join our rotation of Cars films. And I will gladly replace either of the other two movies with this one.

It has a great moral of not giving up, believing in yourself and helping others to shine.

I look forward to seeing which toys my son and daughter gravitate towards these next few weeks. I have a feeling we’ll be seeing a lot more yellow around these parts.

Are you excited to see Cars 3? In theaters everywhere June 16th! Have you seen it? What did you/your kids think?

What a great post! Thanks for sharing! Cars has been along for so long so it is great for children of younger ages and even older ages to bond over!

Hey thanks Charlotte! Seriously, the bonding over this cute movie has been unbelievable. He likes me to pretend to be the characters with him. It’s pretty sweet.

Great review! None of my older three kids have been interested in the Cars movies at all, but my almost-two-year-old gets so excited over the Cars toys he sees at Target, so I’m thinking I will have to pull out the first movie and let him see it before we check out this one!

Thank you so much! I love Cars toys because they’re small and relatively inexpensive. So he’s not begging me for a $20 toy, just a $2 one. haha. Let me know if your 2-year-old digs it! If so I bet he’ll love this one!

I have to admit, I wasn’t keen on the first 2 Cars movies, but my kids love them! I’ve read so many positive reviews of Cars 3 though, that I’m hoping I enjoy it when I take them to the cinema to see it. I’d hate to be sat there looking at my watch all the time!!

Oh my goodness Brenda, I didn’t even think of that! How sad!

For rare parts, always buy in person. These days, it is quite common for car owners to buy auto parts online. After all, finding and buying car spare parts on the Internet is faster and more convenient.

Your post is very great. Hope you’ll be successful in your life!
games center app

Your post is very great. Hope you’ll be successful in your life!
game center app games

all bike games Thank you a lot for giving everyone an extremely special opportunity to check tips from this blog. It’s always so superb and jam-packed with fun for me and my office acquaintances to search the blog nearly 3 times a week to study the newest secrets you have

truck driving games for kids For rare parts, always buy in person. These days, it is quite common for car owners to buy auto parts online. After all, finding and buying car spare parts on the Internet is faster and more convenient.