Who taught you that?: She says/ She says

I’m continuously impressed by the retention abilities of my three-year-old. She’ll spout out new words, phrases, songs, and I’ll ask her where in the world she learned it, and she’ll confess the source. 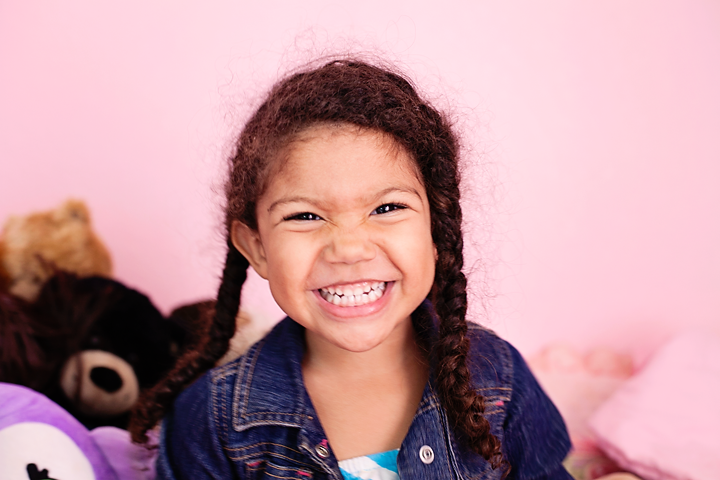 Earlier this week I was tucking her into bed when she said, “Give me a big squeeze you mommy you!” And jumped into my arms and hugged me as tight as she could. I squeezed her back. It was totally cute, but I’d never heard her say that before so I asked her where she learned to do that.

She says: Your friend. Remember, she was in the car with you? What’s her name again?
She says: I’m not sure, what does she look like?
She says: Umm, she has two eyes, and hair… Do you remember her name now?

I tried to stifle my laugh.

She says: Not yet, what else does she look like?
She says: She had a yellow dress on, and a pretty bracelet that I really liked. 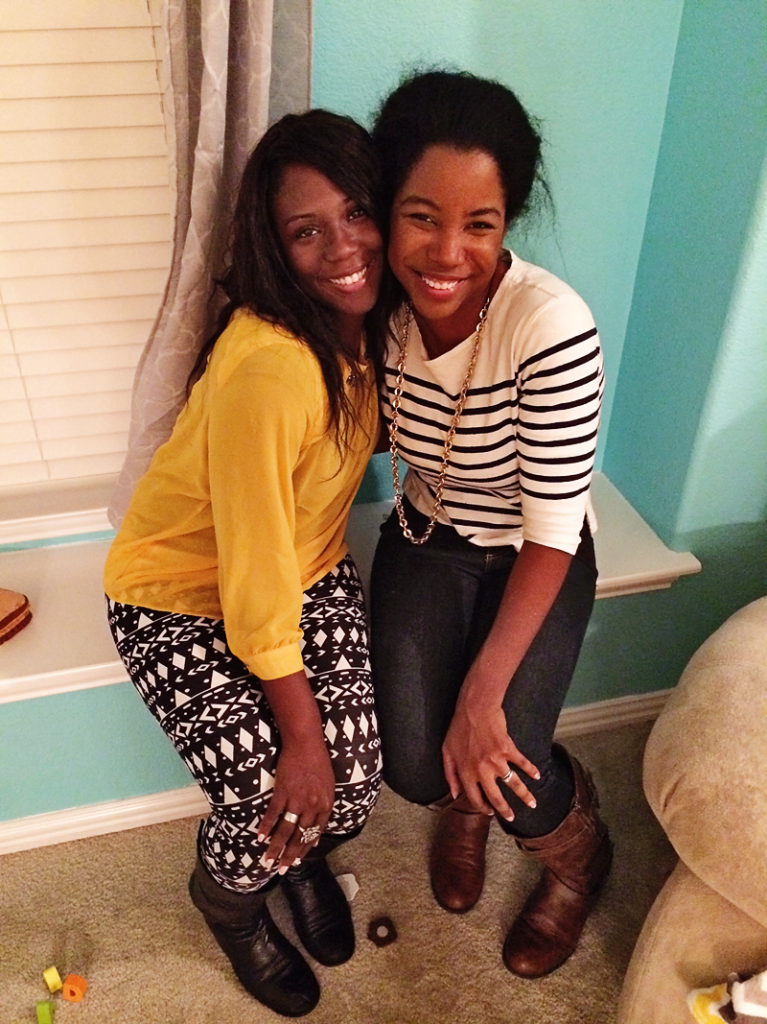 Funny enough, at this point I actually knew exactly who she was talking about. –One of my friends who came to visit almost a month ago. I was a little surprised she hadn’t thought to point out hair color, hair length or skin color, especially since she seemed to be full of brown-skin questions a couple months ago.

She says: Oh you mean Ms. Zandra?
She says: Yes! Ms. Zandra. She told me that! And that boy she was with… He had NO HAIR!

She giggled. “That boy” was Zandra’s husband.

She says: That’s right.
She says: How come he didn’t have hair?
She says: I don’t know, I guess because he shaved it off.
She says: No, he said it’s because he went to sleep like this *pretends to sleep and snore* And then he woke up and his hair was all gone!

I love how excited she is to learn about the world. I love that she can’t wait to learn. I can say something like “that’s spectacular!” and she’ll ask me to explain what spectacular means. Next thing I know she’s using it in a sentence. Same thing goes for mannerisms. 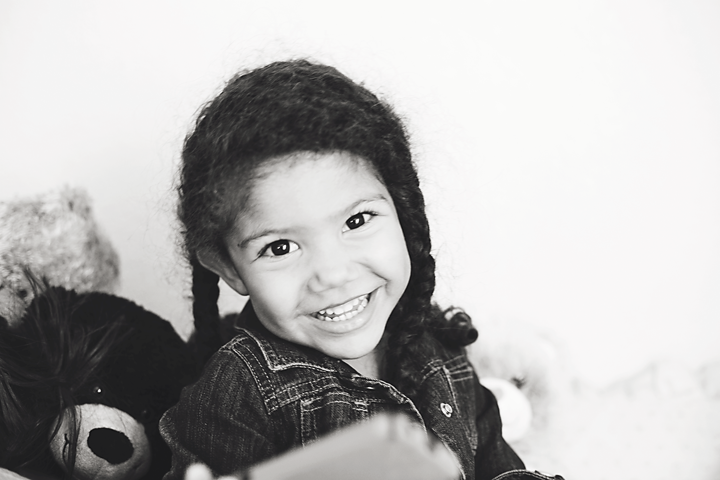 Lately I’m hypersensitive to the way I’m acting and responding to situations, especially frustrating ones. She’s watching and learning from my every move. Now’s the time for me to teach her, and build a strong foundation for how she should act in the future. It’s my hope that she’ll be strong enough to withstand temptation to follow the crowd when they may be acting rude, or disrespectful. I don’t want the world to ruin her sweet compassionate spirit.

I know I can’t shield her from people who will hurt her feelings, or teach her things I disapprove of, but when it comes to new things she picks up, I hope to be one of the strongest influences in her life.

As for bear hugs for mommy… Those are always good in my book.

She’s so sweet! Yes, I too am amazed ad their retention. Nia’s at the point where she’s retaining sassy things from I don’t know who and it’s getting her in trouble at school. She recently told the teacher’s assistant to “mind her own business” – Lord, help me! My biggest concern is that I feel like the way she acts will be seen as a reflection on me and people will think she learns how she’s talking from me but most times I’m surprised myself. I need a shirt that reads, “She didn’t learn that from me!” LOL!

That is too funny Quiana! I think that shirt would sell very well to many moms! It’s crazy how the stuff they learn from other people can overpower what we try to teach. Your daughter is too funny! I bet our two girl would be a hoot together!

Little people never cease to amaze me. They are little “sponges”… soaking up EVERYTHING! :c) I LOVE seeing the world from their point of view. Her description of your friend is PRICELESS! You’re SO right (regarding being her example) It’s funny watching them develop into little versions of their “grown” self. lol She’s just like my daughter was. I remember those moments like they were yesterday. (daughter is now 21) Thank you for sharing your family with us!

They really absorb everything don’t they. So tell me, is your 21-year-old still just as sweet as she was? Is there hope she’ll stay this way?

What a precious story!! I love that. The other day, I was muttering to myself about how my mom will just kill me if I don’t get the amex done… and I stopped short of myself and realized that Dominic has been doing the same thing. he’s repeating things he heard long before I thought he could understand… scary how much influence we have over our babies.

I really enjoyed this one.

It’s so funny the things kids do – and don’t – notice. When my oldest was two or three, we got her a dark-skinned baby doll for Christmas. Up to this point, all the dolls she had, had been gifts from others and they were all fair-skinned. Probably all blue-eyed, although maybe there was one with green eyes somewhere in the mix. I’ll never forget her opening it up and gleefully exclaiming, “Oh, look! It’s a baby with BROWN eyes!” Never mind the whole BABY was brown; she just noticed the eyes.

Reminds me of your daughter’s expectation that you’d be able to identify your friend by the description that she had hair and two eyes. 🙂 (Although if the friend’s husband was bald, I guess she felt the hair was pretty significant!)

I especially sympathize with your last couple paragraphs. I feel the same way with Flintstone right now (he’s 3 1/2). My current pregnancy is subjecting me to wild mood swings unlike anything I had in the past and I am constantly reminding myself to set a positive example!

Aren’t kids hilarious? I can’t get enough of her little brain.

Good article. I will be dealing with some of these issues as well..

An outstanding share! I have just forwarded this onto a co-worker
who was conducting a little research on this. And he actually ordered me
lunch simply because I stumbled upon it for him…
lol. So allow me to reword this…. Thank YOU for
the meal!! But yeah, thanx for spending the
time to talk about this issue here on your website.

My web blog who is daniel bryan

A motivating discussion is definitely worth comment. I believe that you ought to write more about this
subject, it might not be a taboo matter but usually people don’t talk about such issues.

To the next! Many thanks!!

Hello there! This is kind of off topic but I need some advice from an established blog.
Is it very hard to set up your own blog? I’m not very techincal but I can figure things
out pretty quick. I’m thinking about setting up my own but I’m not sure where to begin. Do you have
any tips or suggestions? Thank you

The just like you find out my thoughts! Material understanding a good deal somewhere around this, as if you submitted the ebook in it or anything. I’m sure which you can do with a bit of Per-cent to strain the content residence a little bit, nevertheless instead of that, it is excellent blog site. An excellent go through. I will unquestionably return to their office.. Wrestling Card Game