Your Behind the Scenes Look at a Star Wars Guided Tour

Star Wars: Galaxy’s Edge just opened at Disneyland! And if you were anything like me you were stalking various Instagram stories and social media posts to see what it’s all about. If you’re even more like me you may have also been browsing your calendar and vacation dates to see when you and your family can take a trip. Or maybe you’re saving your coin and counting down for Star Wars: Galaxy’s Edge to open at Walt Disney World. Perhaps you already have a trip planned and it’s just before the opening. Or your looking for other ways to get your Star Wars fix right now.

Well my friends, I’m today I’m going to share about a little something called Star Wars Guided Tour. It will take you to a Galaxy Far, Far Away, right at Disney’s Hollywood Studios and give you the fix you need while you wait for Galaxy’s Edge to open. 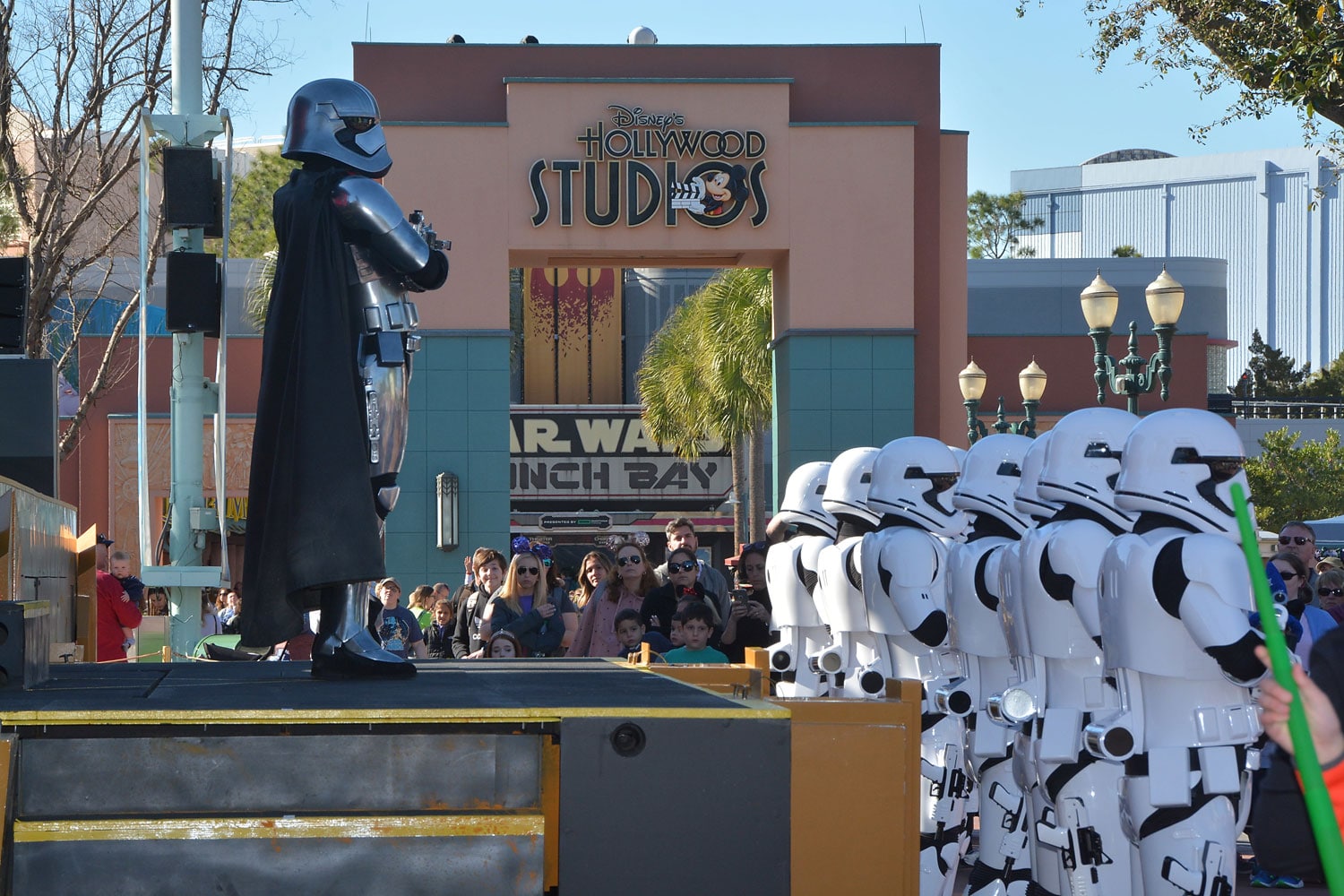 First, here’s a two minute video of most of the experience. I think it sums it up pretty well, especially if you’re short on time and want to get a feel for what it’s like.

When we attended Disney Creator Days in March we had the chance to participate in a Star Wars Guided Tour so we could see what it’s all about. I hadn’t ever tried one before but I was raised by a huge Star Wars fan and was excited to give my kids an up-close look at what it’s all about. My kids are 6, 8 and a baby and they don’t know much about the movies yet but they do know some of the characters. They were super pumped that the tour included Jedi training and many other surprises. You can read everything that is included in this 4 1/2 hour experience here, but I’m going to break down our five favorite parts. And make note of a couple of things that may be intense for sensitive kiddos.

So I must admit we were rushing to the tour and I had no idea what we were walking into. I hadn’t researched it before. Cast members handed us some headphones and passes and we followed two cute ladies with microphones and a lot of Star Wars information. When we walked into lunch at the Backlot Express our food was already pre-ordered for us (based on our earlier requests). And we were seated in a private area of the restaurant. This was nice because our kids had some space and I was less stressed about them being loud or disturbing.

It felt really casual and the food was all absolutely delicious. It isn’t super easy to get great burger at Disney World but this place has some really good ones (as does the Sci-Fi Drive in in case you were wondering). We were in for a fun surprise when Storm Troopers showed up to give us a hard time. As we finished up we enjoyed some special blue and red lightsaber churros. And we got some cute Darth Vader souvenir cups.

VIP Spot in the March of the First Order

From eating next to Storm Troopers to getting a front seat at the March of the First Order. And by front seat I mean you’re actually in the march. They didn’t tell us this before so one minute we are walking over to watch the little parade and the next thing we know we’re marching right behind them. At first I thought we were just following them. Maybe rounding out the show. But after a minute or so I realized we were actually in the march. As in all the spectators watching us. We got a kick out of it and had a lot of fun seeing it all go down as close as you can get. 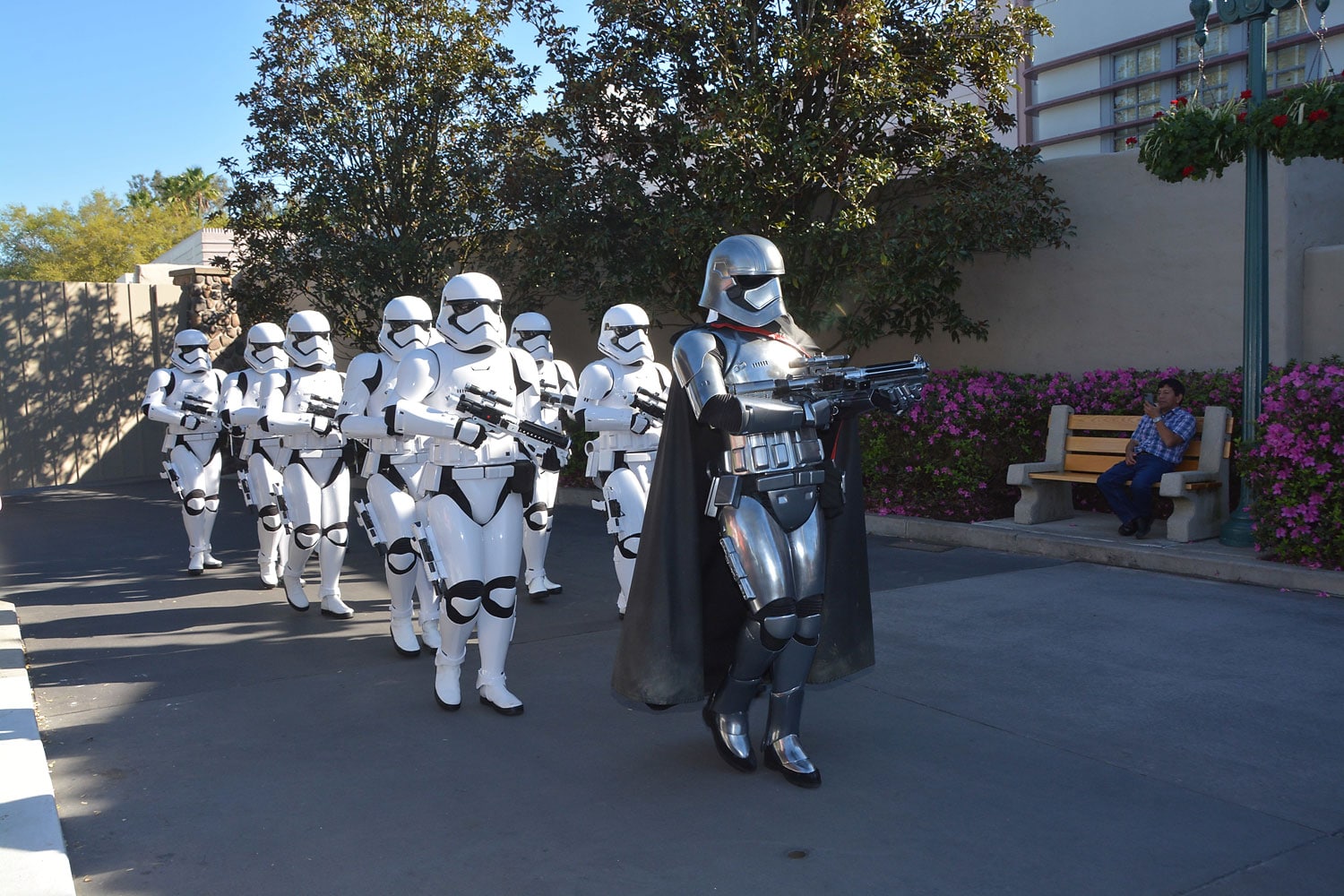 Following the march we had VIP seating to the Star Wars: A Galaxy Far, Far Away live show. Our tour was a little shorter because we were on a tight schedule but yours may include VIP seating to the Star Wars: A Galactic Spectacular show. Both shows include some fireworks. Less during the day and our tour guides gave us a warning. But still, my son didn’t have his headphones so he was pretty started by the booms. Especially being so close. He did enjoy the rest of the show until then though.

So this time around I didn’t get to go on the ride because I was holding Lee Lee. But my Mother in law rode with the big kids and they had a good time. Lil’ J came off slightly shell shocked but just yesterday she asked me if we could go on it again, which says a lot. Riders need to be 40in or taller to go on this 3D flight simulator and it’s SO. MUCH. FUN. Though I didn’t go on it this trip I did before and plan to again. It’s a ride you don’t want to miss.

Up Close and Personal with Chewbacca, Kylo Ren and BB-8 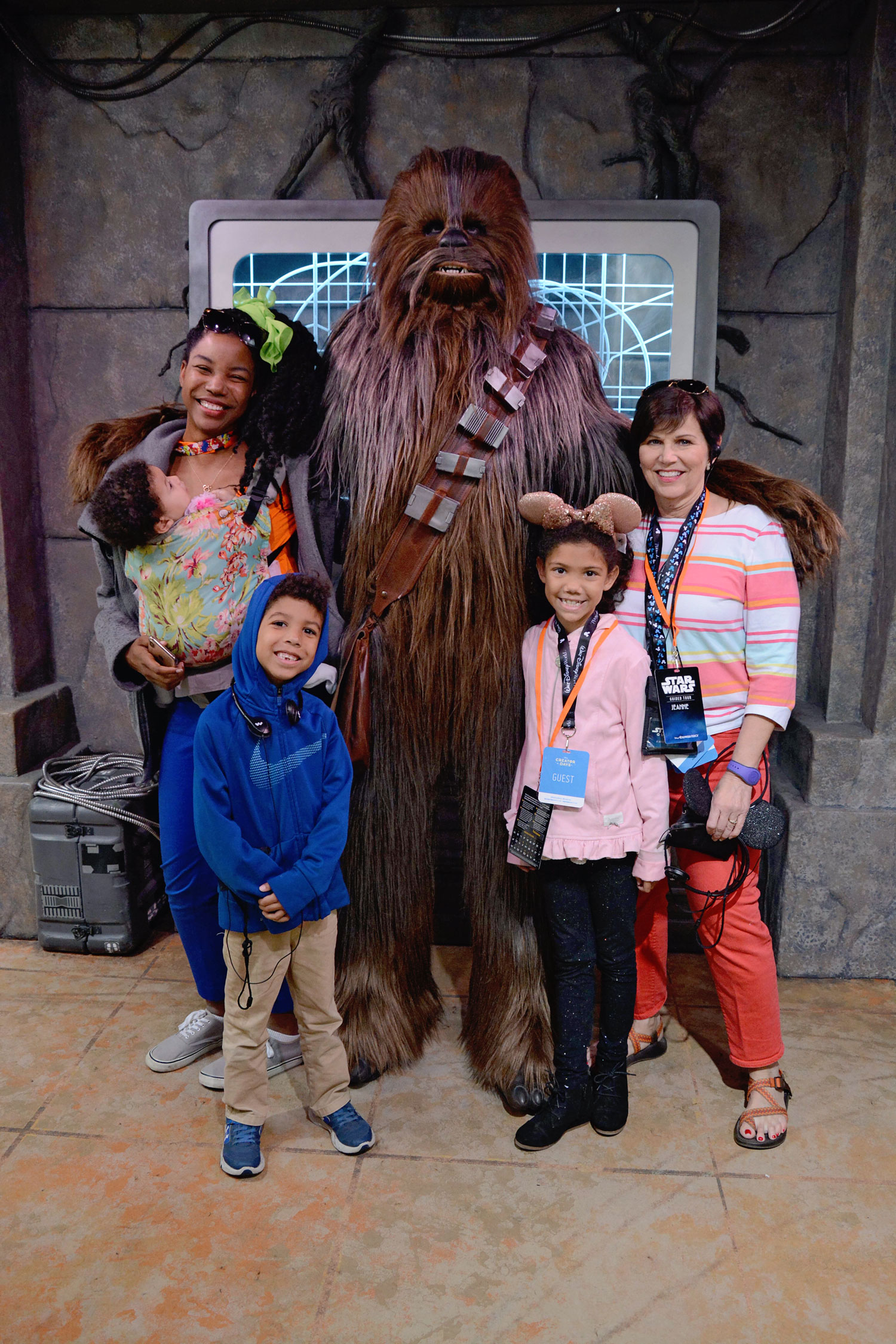 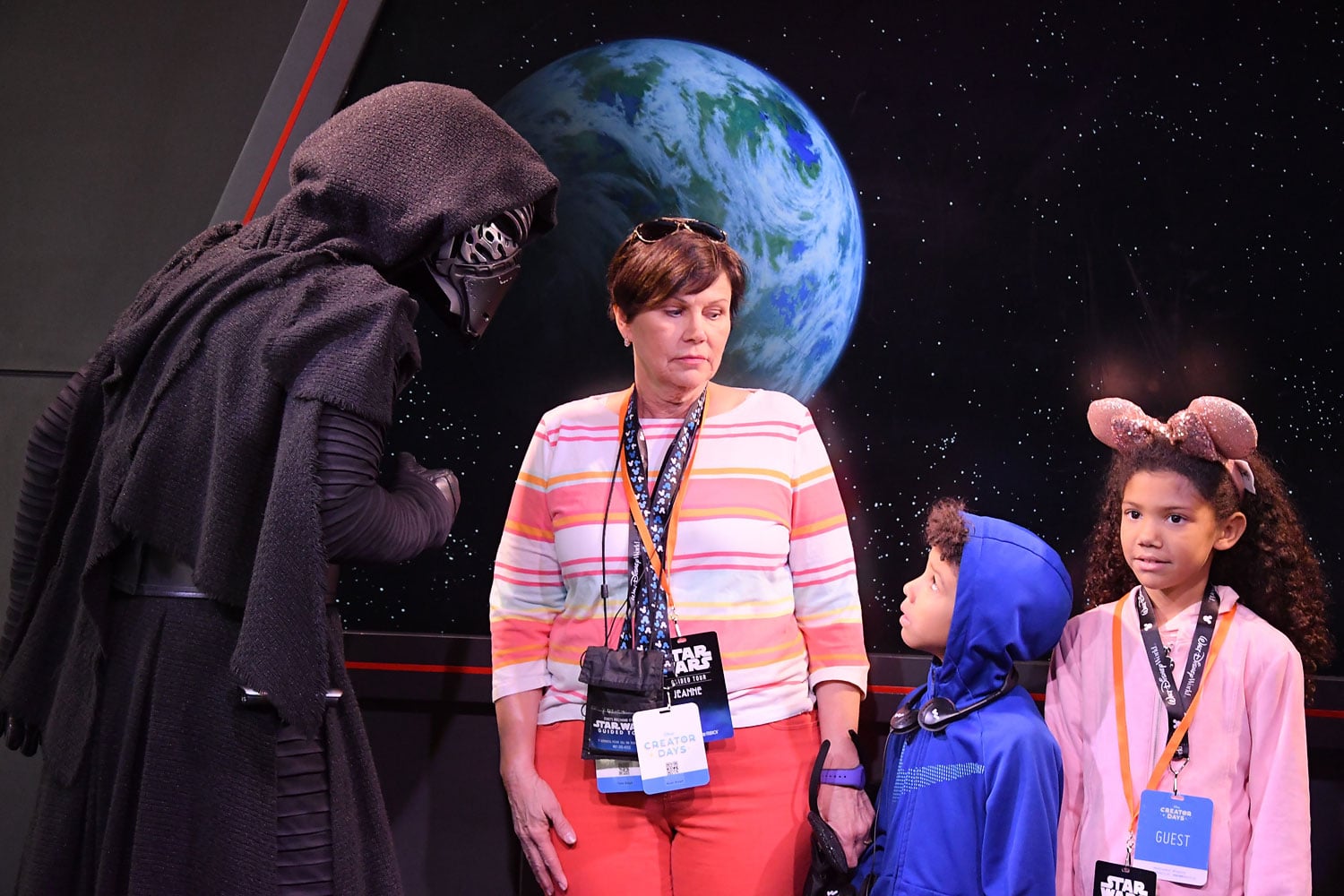 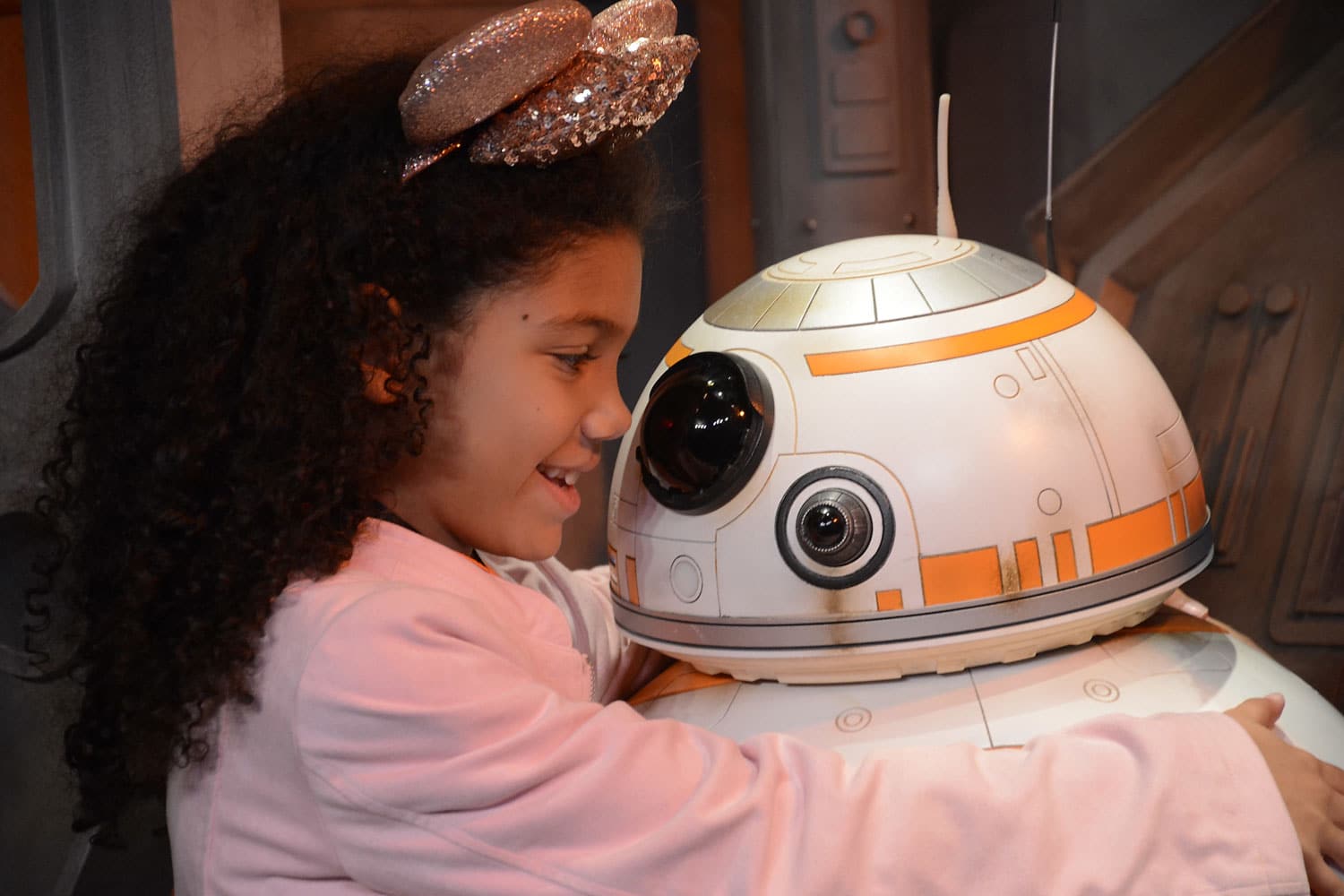 My personal favorite part of the tour was watching my kids’ reactions as they met each of these characters. Chewie mesmerized Lee Lee. Kylo Ren startled Lil’ J and BB-8 delighted both of my big kids. Lil’ J brought a sparkly flash drive to show him. It was truly magical.

Ok now this is where it gets really interesting. So Lil’ J was really excited about Jedi Training until she saw an earlier show and noticed that all of the kids were up on stage in front of a crowd. I told her they were just in front of their parents, and that she’s performed a bunch in front of audiences during cheer. This calmed her down a bit but next she worried about getting “dropped off” in the training area (where they got dressed and learned he rules). But that wasn’t the case at all. At least one parent stands by the whole time and as they march to the battle area. When she realized I wasn’t going anywhere she was able to enjoy learning the rules and diving into the experience. 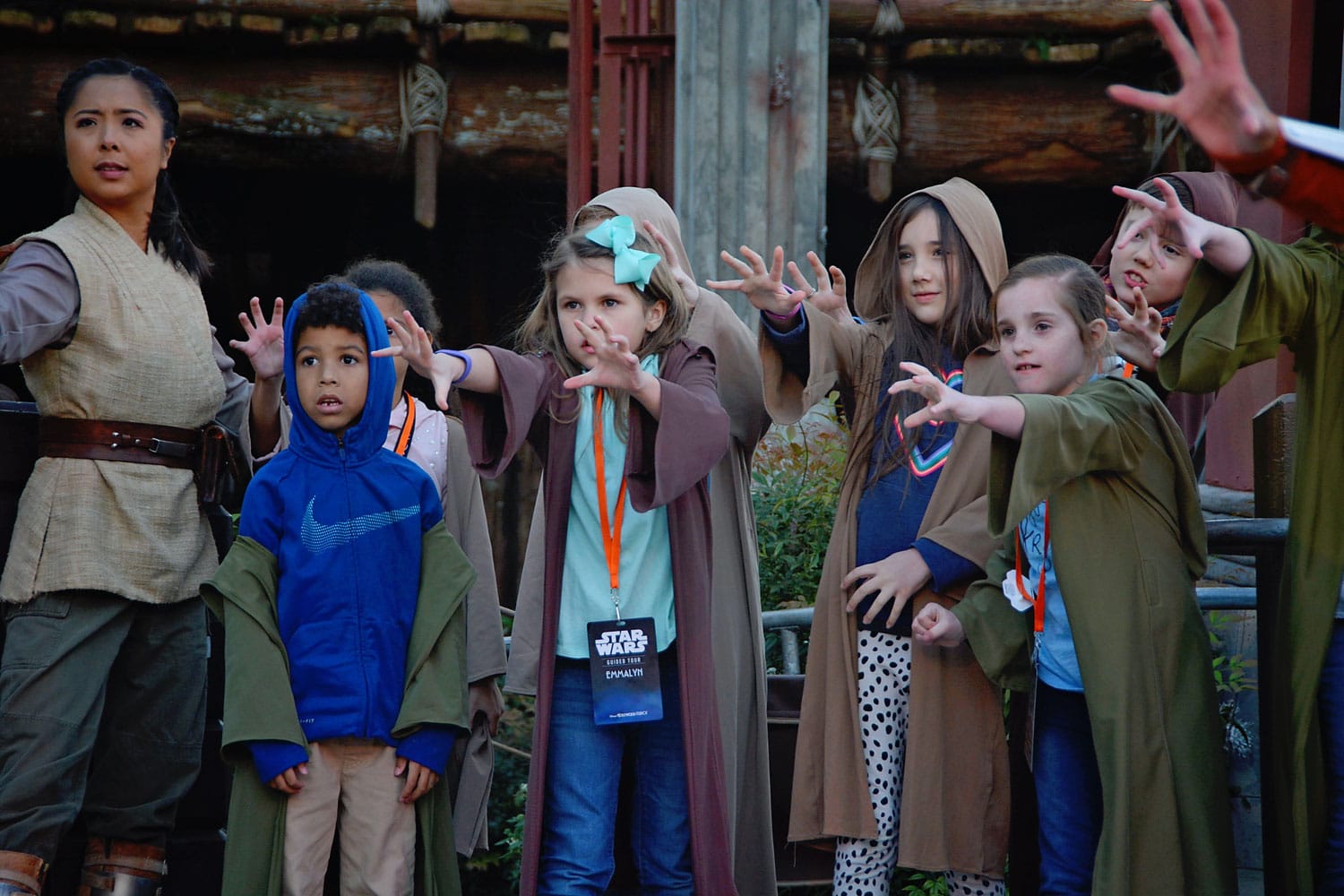 When they were all dressed and ready to go the kids marched to their performance area while chanting: “Here come the Jedi. Here we come!” Big smiles all the way. On stage they learned some cool moves from Jedi trainers. Suddenly fog appeared and the door started to shake. Of course my eyes were on my kids and I was near tears watching their reaction to all of this. The kids were suppose to use the force to open the door. But when it started to shake and fog appeared you could see their mind shift. My son covered his ears, in anticipation of a loud noise. My daughter backed up. I wasn’t sure how this was going to go.

When Things Got Real

One of their trainers got sucked into the hole and two bad guys came out. Kylo Ren and Darth Vader. This was when Lil’ J lost it realizing she was suppose to battle him. Her turn came up pretty quick but she was in tears and opted to pass. When it was Big T’s turn I had no idea what he’d do. He hesitated for a moment before a Jedi trainer gave him a push into the ring. Surprisingly he did as he was told and he won! Poor Lil’ J started crying again watching her brother battle Darth Vader, worried he would get hurt. 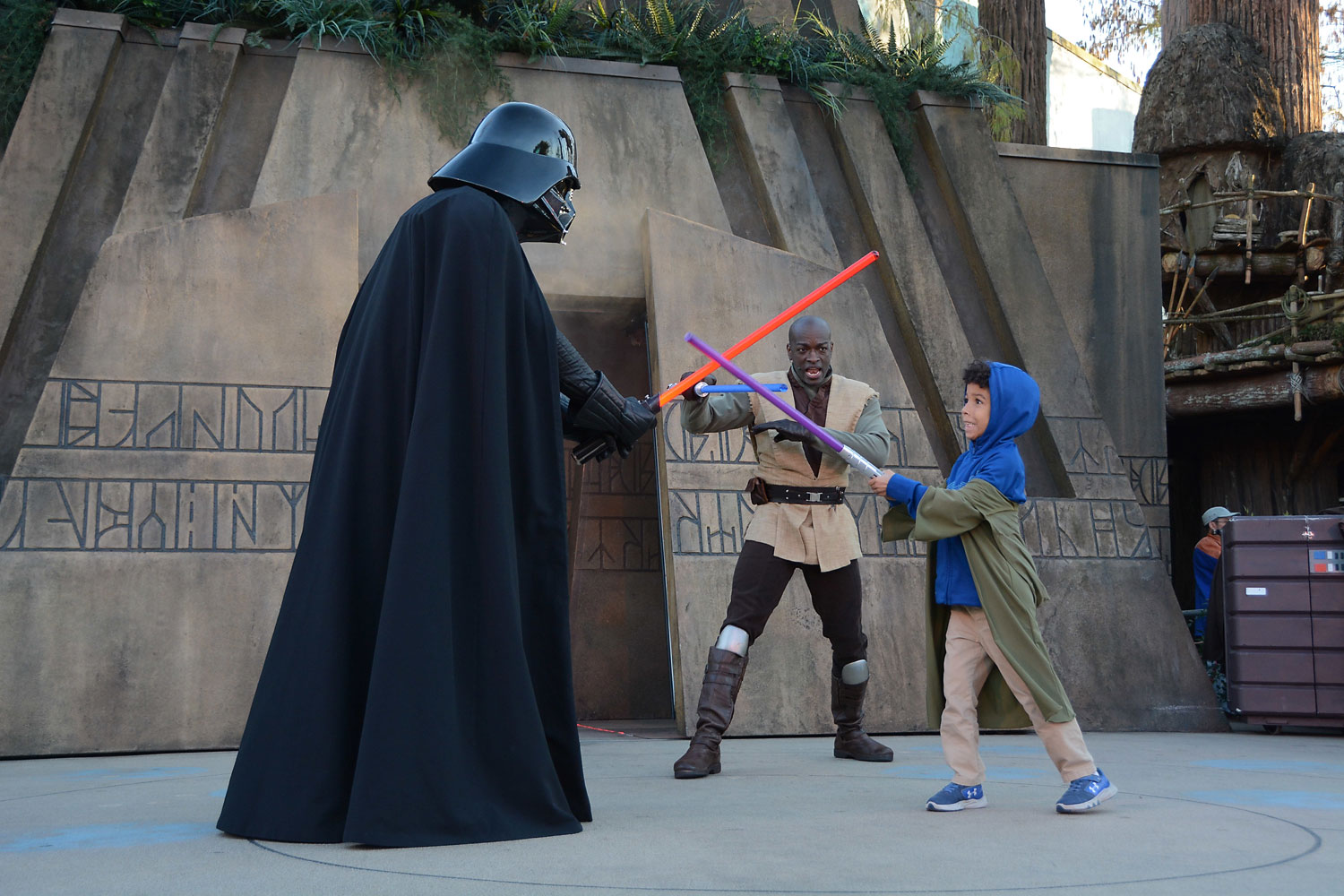 Afterwards she told me she was a little embarrassed but mostly just glad everyone was ok. I absolutely love how she sees the world so vividly. Her imagination is so strong and though she wasn’t brave enough to battle Darth Vader this time, I think she will be the next time she gets the chance.

If you’re a big Star Wars fan you’ll love all the behind the scenes looks at the saga-centric exhibits showcasing replica props, models, concept art and artifacts. Your kids will love all of the up close and personal action with the Star Wars story, and all of you will have a lot of fun along the way. Anyone can add this experiences to their vacation but you do need a park ticket to get in. Then each ticket for this experience is $92.95 a person. Make sure you call ahead of time to get a reservation.

I cant wait to give my kids a true schooling on all of the movies then bring them back for another guided tour along with a trip to the new Star Wars: Galaxy’s Edge! Opening August 29th at Walt Disney World!

For more on planning your Walt Disney World visit make sure you check out some of my other posts!: