I mentioned a while back how we’re planning a surprise trip to Disney World for our kids. Well… I did tell Big T, but he promised not to tell his sister. 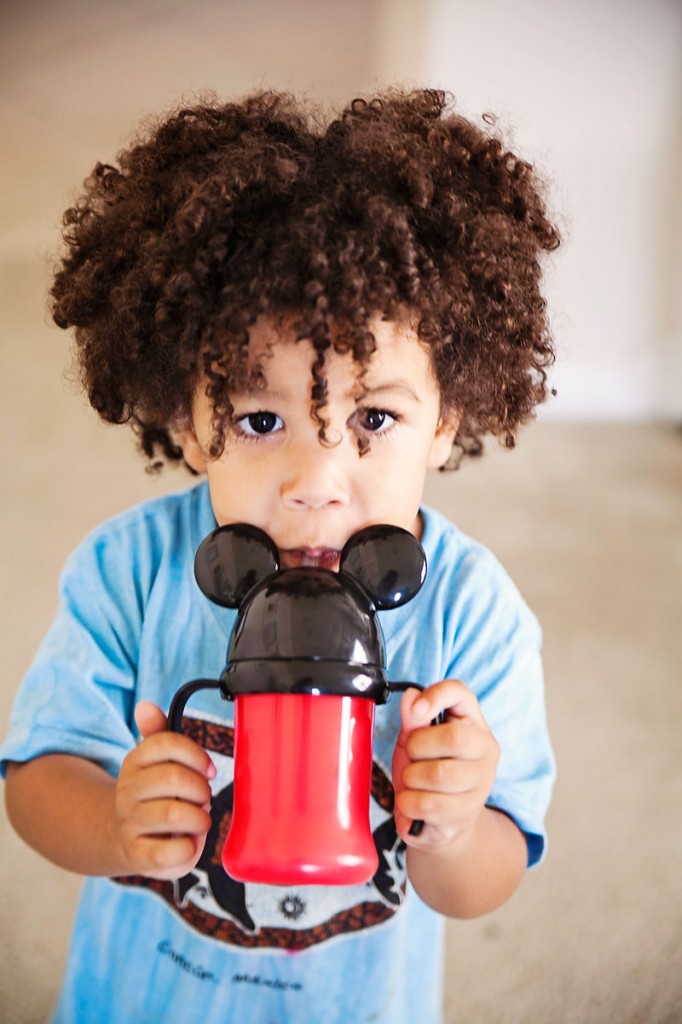 I said I’d update you all on my planning process and explain how it went down. There are a gazillion planning blogs out there, but it can be overwhelming if you don’t know where to start, so I’ll share how I planned things as quickly (and secretly) and simply as possible.

We’re leaving TOMORROW, and that’s when we’re revealing it to Lil’ J that we’re going.

Why the surprise? Well, as soon as we knew we were planning this trip we knew we wanted to make it a surprise. Lil’ J is so cute when she’s surprised with something, and she also asks a million questions, so had we told her at Christmas, like I was originally planning, I probably would have been sick of her asking “When are we going?!” by now. Also, Christmas is special in its own way, so we let her have a fun day on Christmas, and tomorrow will feel like Christmas all over again (we hope).

I’ve been sly though. I’ll ask her things like ‘You know, some day, when we save lots of money and you’ve grown up and we go to Disney World, do you think you’d rather meet the princesses, or ride the rides?”

“Meet the princesses!” she told me with a grin. So I focused my planning  around that. 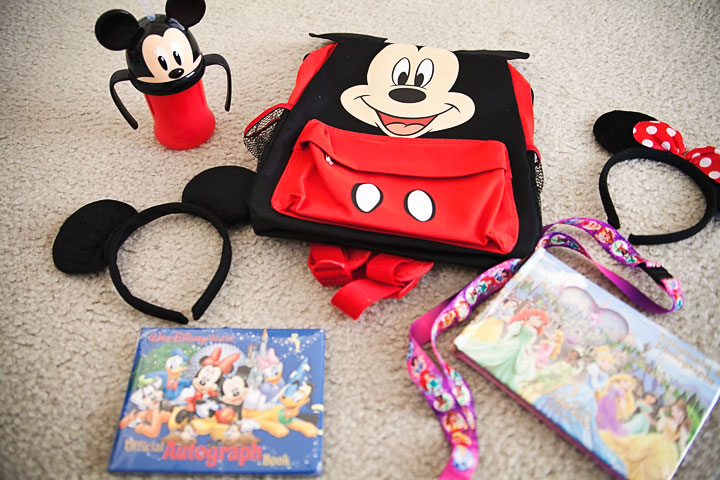 I requested the Disney Planning DVD to be sent to our home (you can do this for free online here) and Lil’ J and I watched it one afternoon during her brother’s nap.

She watched the DVD and got so excited, seeing what Disney World really is. She squealed at the princesses, the parades, the rides, castles and dancing. She called out every character she recognized and got so excited to go there some day.

Once we told her we were saving for Disney World, (and that it would take a LONG time) I also had a way to make her think about things she asked me to buy. It was a neat opportunity to talk about saving. We poured out her piggy bank, talked about how pennies, nickels, dimes and quarters add up, and how 100 pennies, a dollar, and four quarters (and so on) are the same thing. See! Disney vacations can be educational!

She used to ask for a snack out of the vending machine every time we’d go to the gym but it took asking her one time if she’d rather save that money for Disney World and she’s stopped asking. She wrote down two of her goals this year were to “make lots of money” and “save for Disney World (and a new dress).

Planning how we’re revealing the secret to our daughter has been one of the most exciting parts of planning this trip. I watched a dozen Disney vacation reveal videos on YouTube, some of them fails, ok I have to show you my favorite real quick:

SO FUNNY! Ok, so I wanted the surprise to be in a way that gets her to figure out where we’re going on her own, either reading a letter, figuring out clues, what have you.

I loved the idea of having her unpack a back with supplies for the trip and guess where we’re going, but then I started collecting Disney princess dress up dresses and decided I’d incorporate those in the surprise. 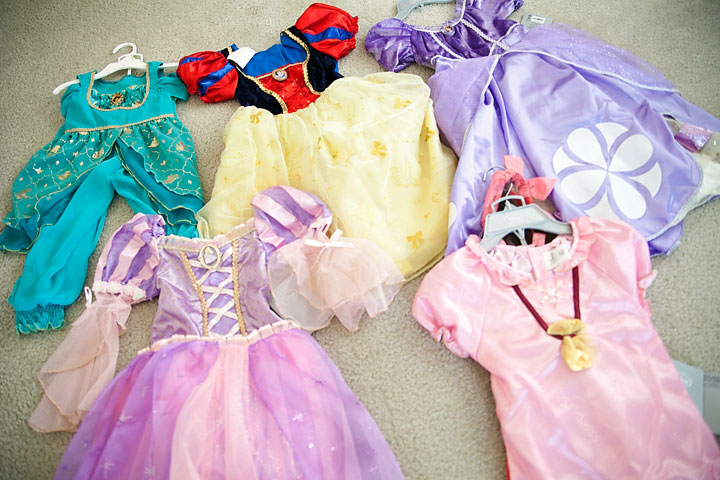 Lil L loves to play dress up, she usually gets a Disney princess dress for Christmas, and she’s kept and worn them for years. I noticed a lot of people on our local moms resale group selling off their old dresses for steals. I got a gorgeous Snow White dress from a neighbor for $10, Jasmine, Ariel, Cinderella and Mulan each for $5-10. I surprised her with a couple of them periodically when she would surprise me with her actions. Cleaning up in places I didn’t ask her to, helping out with her brother, and just generally when I felt like she could use a surprise.

I do hope I’m making the right decision by this and not completely spoiling her, but she’s always been extremely grateful for even the smallest surprises like a card I’ve made her, or recovering a lost toy, and I haven’t really seen her expectations of things change, and she doesn’t beg me for things she wants when we go shopping. If that starts happening I’ll definitely have to rethink things.

Anyway, I have been collecting these inexpensive dresses, and when I was in Hawaii I picked up a few things from the Disney Store on clearance. I got a Rapunzel dress I’ve been eyeing for months because they’ve come out with a new style this year. The old one was sold out online, but they found one in her size in the back of the store. I also got her an Izzy (from Jake and the Neverland Pirates) costume on clearance for about $12. 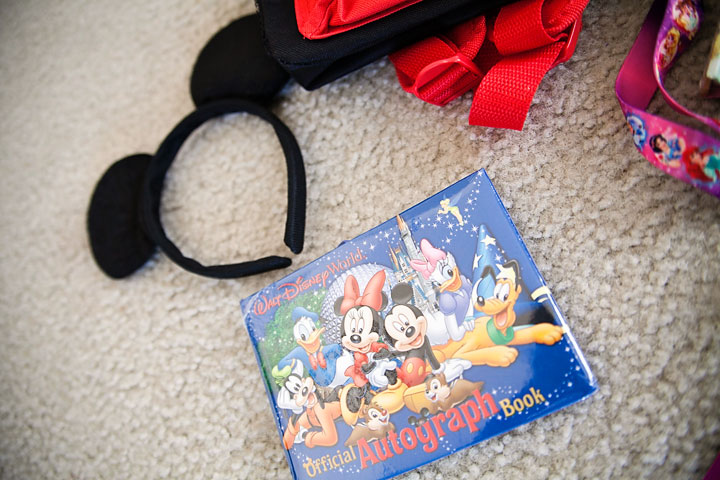 I’ve been hiding all of these in the back of my closet and I just took them out and moved them to Lil’ J’s Disney princess suitcase, then hid that in the garage.

Next, like I mentioned earlier this week, we’ve been practicing sight words so she can read her surprise letter. I had no idea how this would go down, but she’s been soaking this up. She LOVES playing flash cards and going through the words I’ve written down, and she’s starting to notice them in other things like books, on paper, etc. It is definitely a surprise to me.

Seeing how she’s managed to arrange and rearrange the flash cards into her own sentences, I’m not worried about her deciphering the phrase. 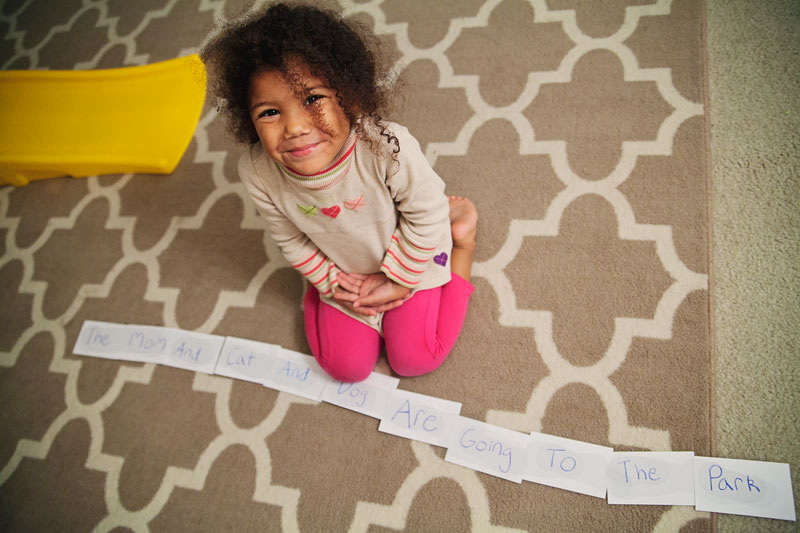 I could have also “hidden” the words Disney World but I was worried the surprise would get too obvious. And since I want her to “read” the surprise on her own, I printed off a picture of Disney World.

I put each letter into an envelope that she’ll open right before we leave for the airport.

My hope is that it’ll go down something like this:

Mom and Dad: Hey! We have a BIG surprise for you!

Lil J stammering with excitement: What? what is it?!

Mom and Dad: Open this and see!

Lil J opens her suitcase and freaks out about all her new princess dresses. Thanks us and hugs us!

Mom and Dad: But there’s one more little thing for you and your brother. 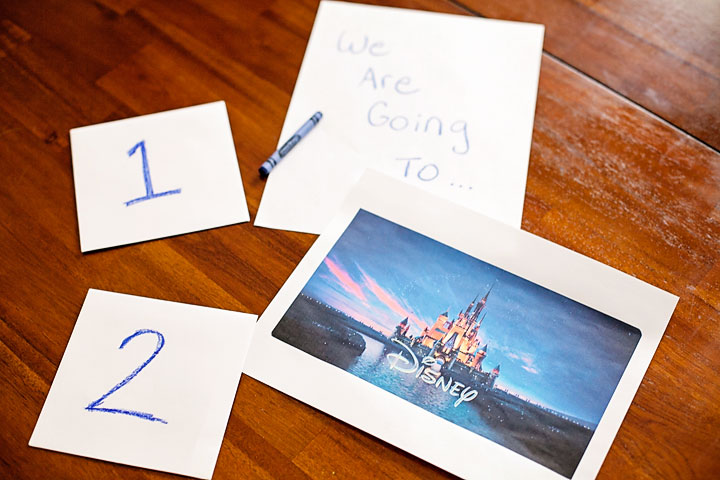 Of course I’ll be recording this whole thing so it’ll be interesting to see if this goes according to plan. I really hope it does.

We also got surprises for Big T, though he caught me photographing his cup and momentarily stole it away. I got it back and hid it for tomorrow. 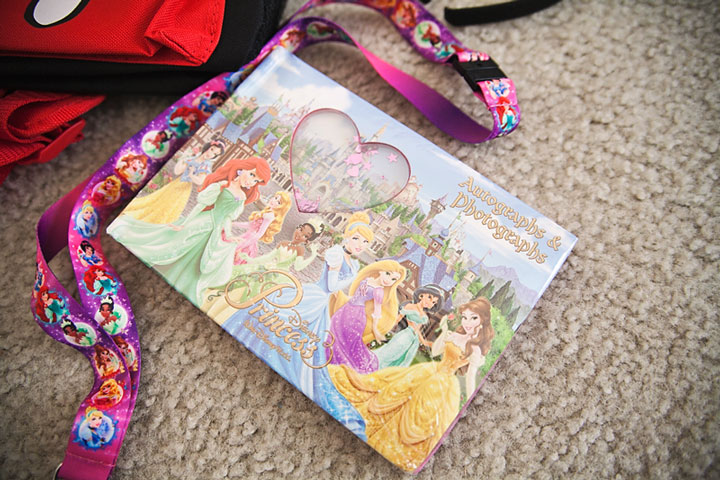 They’ll each get a little backpack with things for the flight and trip: Headphones I’ve “Disneyfied,” autograph books, a lanyard and trading pins for Lil J. Some sticker books for the flight, matching homemade Disney outfits (I’m still finishing them up) and quarters and pennies to make souvenir pennies on the trip.

I packed their bags last night and I’m going to do mine tonight. I have enough work to keep me busy until we leave but I’m so excited to finally tell her. Oh my goodness, which reminds me…

Keyword “surprise.” I had a few friends slip a time or two in front of Lil’ J. One time she heard and said “YOU’RE GOING TO DISNEY WORLD WITHOUT ME?” I quickly said “Oh course not! We’re talking about a Disney movie we’re going to see, that new Disney movie, and you’re coming with me!” … She bought it. Funny enough she did bring it up a few days later and asked why I was laughing and I just said “because I was surprised you thought I would ever go there without you.”

Since then she’s brought me some of her spare change to go in our saving for Disney fund, so I think she will be sincerely surprised.

Since this post has gotten a million words long I’m going to save the planning part of it for Monday. We’ll be running around Epcot, but I’ll shoot to finish writing it before then and schedule it for Monday.

Keep an eye out on my YouTube Channel (here you can subscribe if you haven’t already!) as I’ll probably upload her initial reaction at the airport. I’m picturing this being a multi-camera-type recording so I’ll edit something nice later.

Now that everything is planned I’m hoping we can mostly just take it easy and enjoy what we want when we want. I don’t have too high of expectations since we’re traveling with a toddler, but I still think it’ll be magical for everyone.

Have you been to Disney before? Was it a surprise?

This is such a neat idea to make it a surprise! We took my 3 year old and (then) 12 month old to Disneyland in October and my daughter LOVED IT! Seeing the excitement build was just as fun for me as it was for her. It was truly a magical experience! But then we took a Disney cruise at Xmas and we told her way in advance of that and she drove us NUTS every day asking when we were leaving for our cruise. That’s when I wish I would’ve surprised her!! Funny thing is, when we were on the cruise she asked when we were going to “Disney” because she was expecting the castle and the rides, ha! She still had fun though, there was no shortage of princesses and characters on the ship. 🙂

Sounds like you’re pretty well prepared, but I did a little blog post with tips on preparing for a trip to Disney after our trip. Hope you find it helpful!
http://lifeatthirtysomething.com/2014/10/magical-time-magic-kingdom-tips-on-planning-your-first-trip-to-disney/

Your so lucky to be able to afford to take your kids there. Hopefully one day I can do the same. My vacation this year will be Sea World for my kiddos.

Everything sounds perfect! I bet It was a lot of work preparing it!, but it really sounds good! hope everything went as planned! I may think of doing something like that also!

Thanks for the Idea!

Welcome to Orlando! We hope you have a great time! 🙂