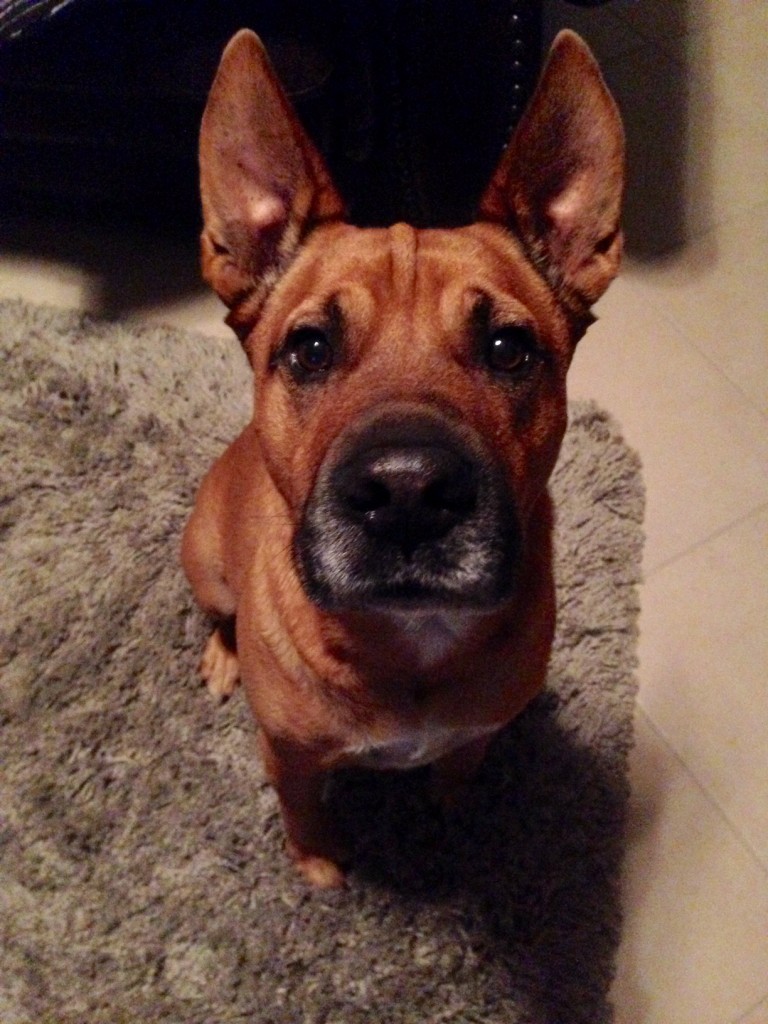 About a week ago my husband rushed inside from unloading groceries and declared he had just seen a skunk.

I ran back out with him to catch a glimpse. He pointed toward the home next door that’s still under contruction.

“It was right over there!” He said. “At first I thought it was a dog, then I thought maybe it was a big cat, then I realized it was a skunk!”

We looked around the area but didn’t see it. Behind that lot, and beyond our fence, there’s a big field that all sorts of animals that live there. Snakes, bunnies, frogs, and apparently skunks. There’s a rabbit that loves to come through our fence and terrorize our dog from time to time. I guess this skunk–or its friends–decided to follow in the rabbit’s suit and squeeze under our fence.

Two nights ago, I had just finished putting Big T to bed, and sat down to work at my computer when my husband called from the living room.

Snoop burst in, ran through the house and sat down next to me in the playroom/office area. I only took a moment for me to catch a good whiff of him. 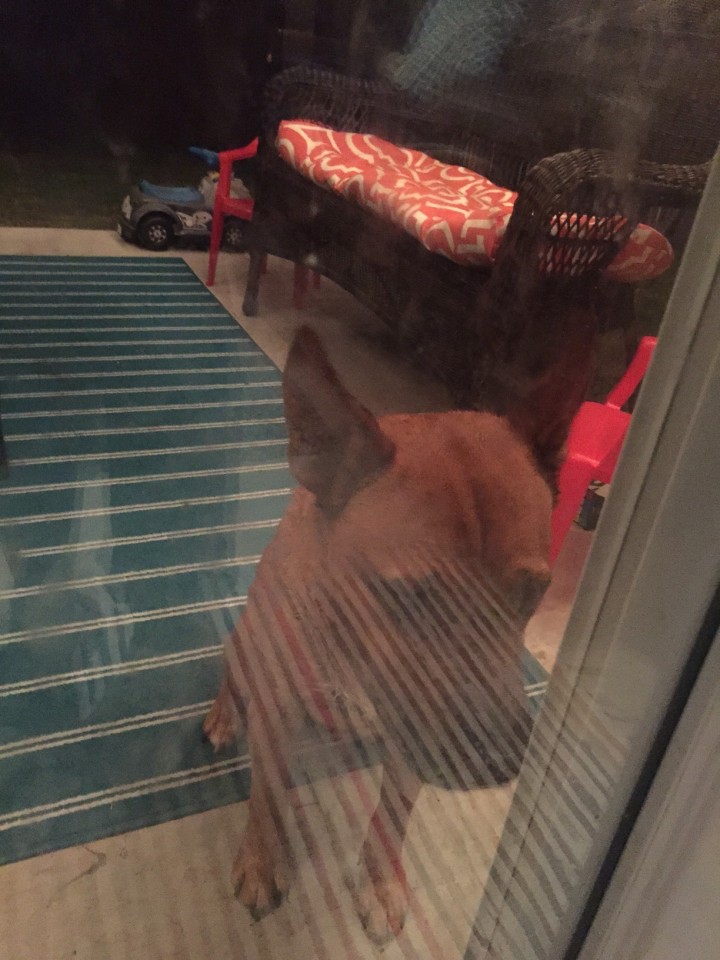 We rush to get him back outside and instinctively I know what has happened.

“Snoop got sprayed by a skunk!” I say. But I don’t know that for sure.
“I thought a skunk’s spray was suppose to be really bad,” my husband counters.
“Snoop was inside for less than 10 seconds and the house smells terrible,” I said, “I think that’s pretty bad. What does a skunk smell like anyway?”
“I don’t know, I just thought it be stronger,” my husband said.
“Well it is, it smells like really bad burnt rubber or something. I’m going to Google what a skunk smells like.”

As I type in the words “What does a sk…” Google fills in the rest for me, and lo and behold, the first response to this very question is exactly what I thought.
“The smell of skunks has been compared to burnt rubber.”

“What did I just say the smell smelled like?” I asked my husband, trying to prove to him my ability to describe a scent, and my superior sense of smell or something.
“I don’t know, what?” He replied. Was he not paying attention?
“I said it smells like burnt rubber, and that’s exactly what these replies say on Answers.com.”
“Oh ok.” My husband said unamused by my talent or my smugness.

He still insisted that he didn’t think the skunk actually sprayed Snoop, but maybe the air and Snoop was nearby. Whatever.

“Skunks don’t spray just to fart,” I told him. “It’s a deterrent for predators.”

The stinky smell lingered throughout the house and we weren’t about to let Snoop back inside to make it worse. I phoned a friend… Rather, texted my sister-in-law. Our family dog expert. 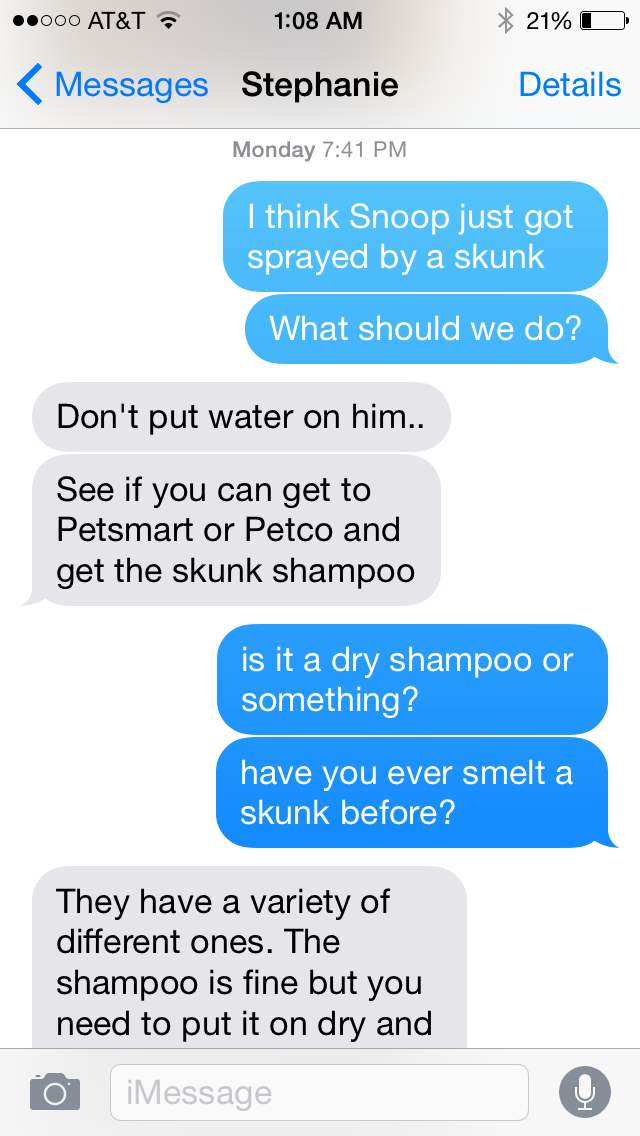 I’m glad she warned us about the water thing. Later I read how wetting the dog down first could set the stink in for weeks. I probably wouldn’t have noticed that before it was too late.

We called Petco and asked about the de-skunking shampoo they carried. The woman on the line answered me with a sympathetic voice.

“We have two kinds,” she said. And went on to tell me about the two brands. My husband listened with me over speaker phone.

Lil’ J was still awake and very amused by the chain of events that were unfolding, so she went to the store with the hubs to pick up the goods. As they left Lil’ J told us her opinions of the situation she had been soaking in.

“It doesn’t stink to me,” she said. “Cause I can’t smell anything, cause my nose is stuffy.”

Meanwhile poor Snoop was still scratching at the backdoor. It wasn’t cold outside just yet. The high was 77 that day, and we hadn’t reached the low.

When my husband and Lil’ J returned with the goods, he donned the rubber gloves and got to work. 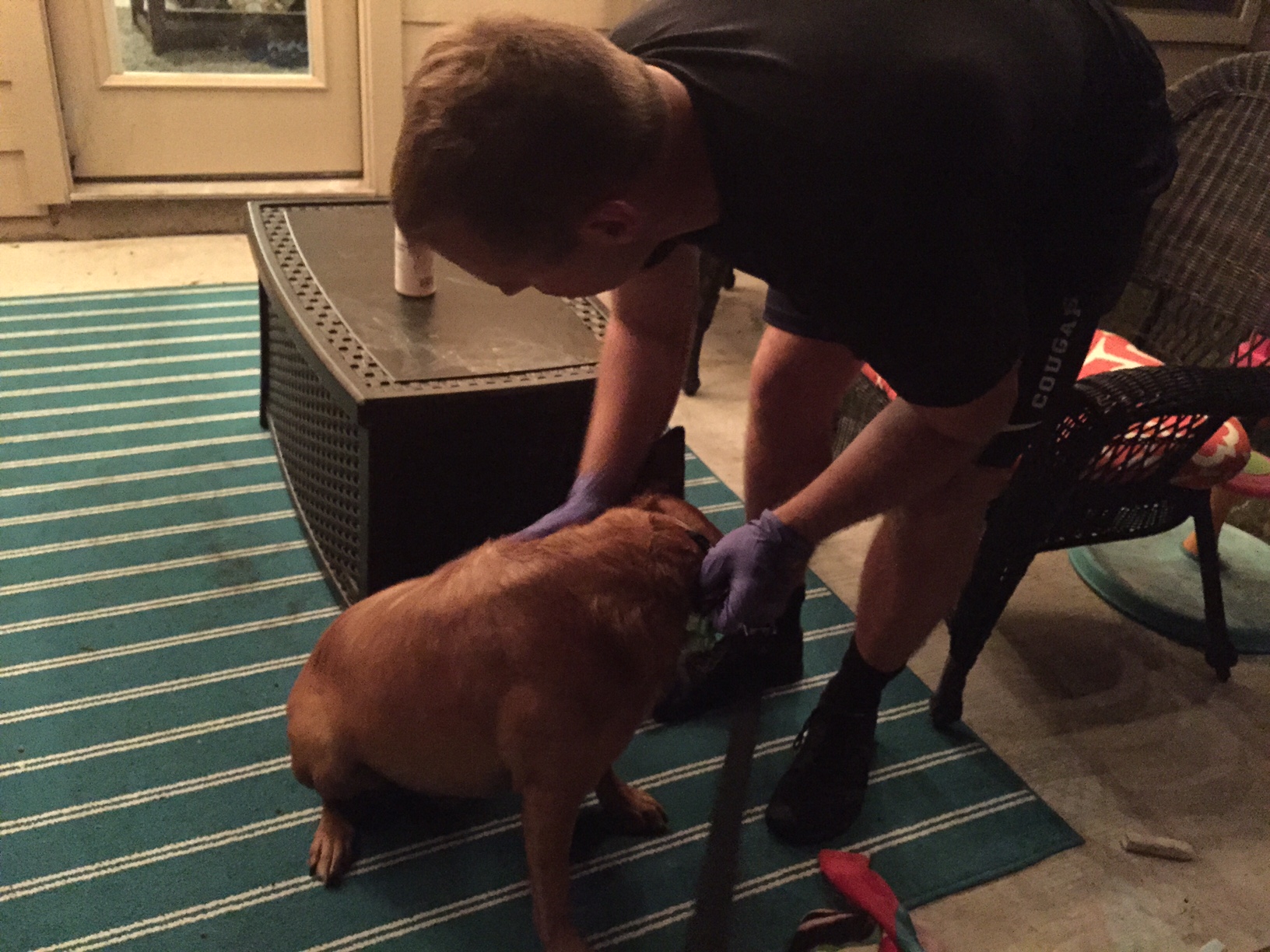 Lil’ J and I went out to help after Snoop was lathered up. Lil’ J was concerned.

During the entire washing ordeal I kept thinking about the Curious George episode where tomato juice solved all their skunk stink problems. I was actually surprised Lil’ J didn’t bring it up. Luckily, I think the shampoo was much less messy and better-smelling than the tomato juice option.

Poor Snoop yelped as we rinsed him off, but three shampoos and two rinses later he was smelling much better. 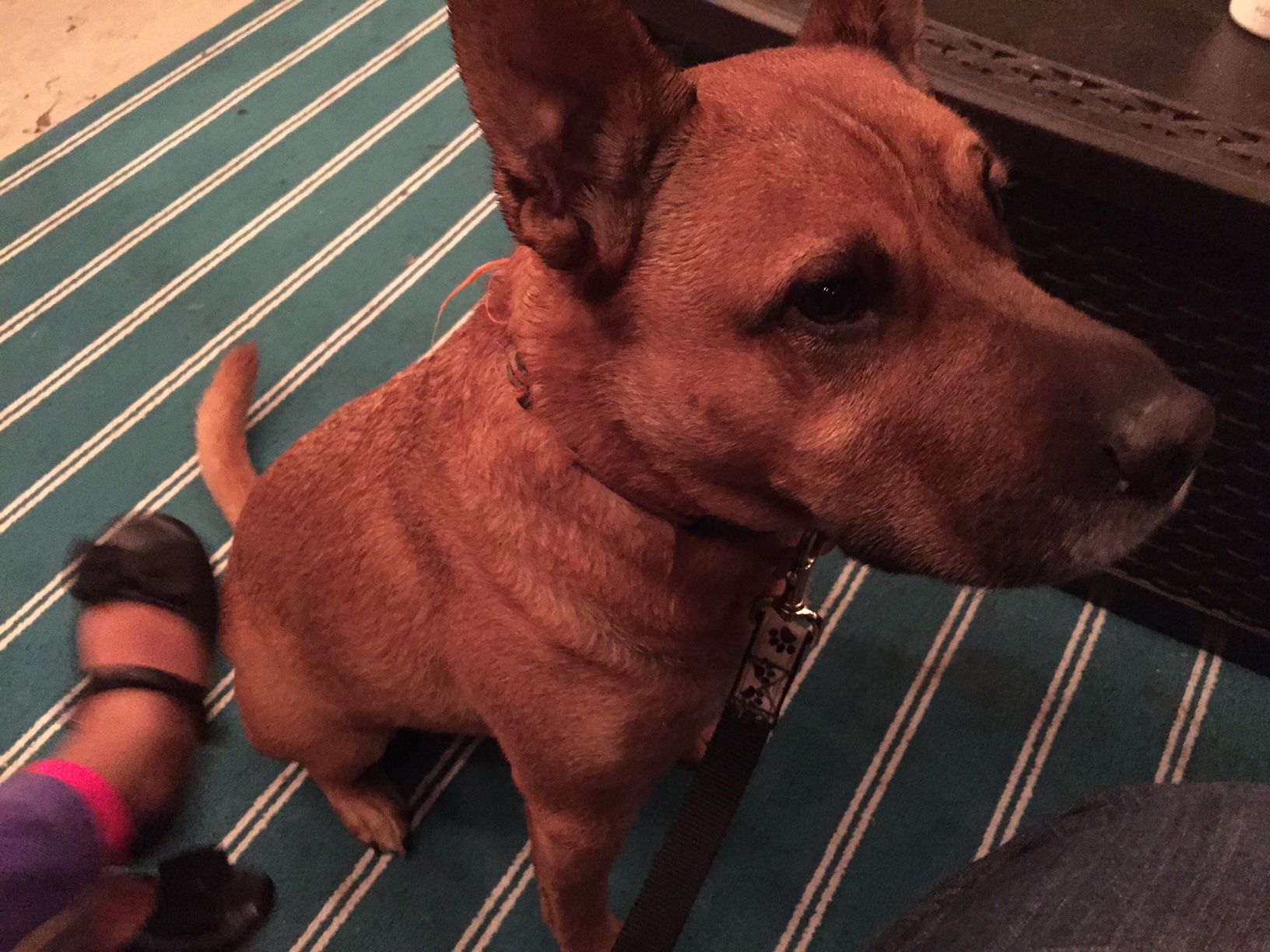 We dried him off and let him back in the house. He was allowed to sleep in his usual spot next to our bed, but I kept waking up all night sure I could smell a lingering stench of skunk.

It seems better today. We vacuumed the floors with some scented powder and lit some Febreze candles. Every now and then I can still smell a hint of that dreadful stink, but I’m hopeful it’ll be a distant memory within a couple of days, and praying none of us (especially Snoop) ever spot that skunk again.

Have you ever had a skunk encounter? How did it go? I never thought this would happen to me.

My favorite line: “…. A rabbit that terrorizes our dog….” lol what?! Snoop, Dog-UP buddy, it’s a fluffy bunny.

I know!! He can smell the thing a mile away and he chases it when we let him out. Never fails he’s smacks straight into the fence trying to catch him. This is Bugs Bunny.

My kids have watched that curious George episode over and over. I’m pretty sure it was all they watched for 2-3 weeks. That one episode.

What an eventful day!! This makes me want to have some of that shampoo for dogs and whatever for humans on hand just in case. The only “encounter” I’ve had with a skunk is smelling where one has sprayed while driving. It’s bad. I can’t imagine actually getting sprayed. Glad everything’s better now. Poor Snoop lol!