I’m lying on the couch. Typing this in one hand on my iphone while Lil’ J lies beside, curled up in my other arm.

I was pumped for today. I had been busting butt all week trying to crank out stories for the weeks ahead. Everything was recorded, today was my day to go in, write and edit it all.

I woke up before 7. Made breakfast and our lunches. Got my daughter dressed and gave her some milk to sip on while I finished getting ready.

When she finished that cup she asked for more and I obliged.

Shoes, bow, check, check. Poured Snoop some food and grabbed Lil’ J to go. I felt a slight rumble in her tummy and instinctively knew what was coming. I tilted her forward slightly as she vomited all over our floor.

Instincts didn’t tell me where to run, which should have been the bathroom I was standing next to, but instead we ran around to the kitchen sink, her throwing up a few more times along the way.

It was all milk. Just like it was yesterday. Her school called to tell me she threw up once. She didn’t have a fever so they said they’d stop giving her milk, and that she could stay, they’d take care of her.

I hurried as fast as I could but I still didn’t get to her until 6 hours later. I felt guilty.

Thankfully, she was feeling better. We went to the store and got “sick food” then played with her a little longer before bed.

That brings us back to this morning.

I called to work, unable to bear taking her to school–although when asked, she said she still wanted to go.

I called her teacher who said she’d be more than happy to watch her while I get work done, and that they’d keep dairy out of her diet. I’ll admit the offer was tempting. Missing today means getting even more behind but I know this is where I need to be. Snuggled with my sickling, and nursing her back to health (not literally, we are done with that). 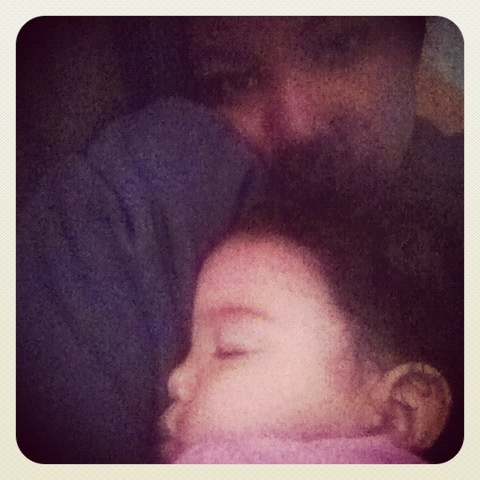 But now in stumped. I bought her new milk yesterday but didn’t open it yet. I smelled the milk she’s drinking now and it smells fine. It’s not expired. Which is why I tried again this morning. Now we are definitely done with that batch, but I worry it’s not that specific milk but milk in general. Will this be a permanent thing or does she just have an upset tummy?

If after all this time milk hasn’t bothered her, it’s probably a bug. My son and daughter have done that. In fact my daughter had it a few months ago. Nothing bothered her but milk. Hope she gets to feeling better.

The stomach flu is going around…so just be careful!

Aww, big hugs to you and Lil J! (poor baby) It sounds like a case of upset tummy to me! When my LO’s tummy is upset milk ALWAYS make her vomit 🙁

I too learned the hard way (after several vomiting relapses and a Google search) that babies can be temporarily lactose intolerant when they have a stomach bug. Give her juice and water for a couple of days and hold off on the milk.

Like the others said, it’s most likely a stomach flu. Both my daughter and I caught it back around Thanksgiving and it was NO fun (I had a fever, my daughter didn’t). It seemed pretty darn contagious too. I passed it to my husband about 4 days after my symptoms were gone (we were out of town, so I didn’t see him until then).

Fluids are important, but too much at once (like more than a sip) will make you hurl, which really sucks.

Like the others said, it’s most likely a stomach flu. Both my daughter and I caught it back around Thanksgiving and it was NO fun (I had a fever, my daughter didn’t). It seemed pretty darn contagious too. I passed it to my husband about 4 days after my symptoms were gone (we were out of town, so I didn’t see him until then).

Fluids are important, but too much at once (like more than a sip) will make you hurl, which really sucks.

My youngest had a vomiting fit a few weeks ago. She was without fever, and wasn’t showing any signs of sickness. We went through this for about a week before I finally took her to the doctor. Turns out she had strep. I would not have figured that since she showed none of the normal signs.

I hope Lil J feels better. Don’t beat yourself up.

Wishing you and your little one a better day 🙂

You already got the advice I would give, so I’ll just say I hope little MIss J feels better soon and you can get caught up on work. hugs

Aww poor baby! Like the others said, children are very sensitive to milk (and any dairy products) when they have a sensitive tummy. I’d stick with juice or Pedialyte, and give her bland foods like toast, rice, plain pasta, etc. I hope she feels better soon <3

Hmmm…I am thinking if it is something new and she has been drinking milk, lil babe probably got a bug. You did the right thing….stay home and cuddle. Hope she is better really soon…lots of love.

We’ve always done 100% almond milk. We’re vegan, but I also did this because it’s proven that more than half of African Americans are lactose intolerant. But really, our bodies don’t require milk after a certain age. I always get asked, what about calcium. Well, almond milk has 50% more calcium than cow’s milk. So that sums it up. And it has protein. If you want to try on Lil J – get the vanilla flavored. Good luck.

Poor little one! If she’s always been fine on milk, it’s probably a stomach bug. Milk always makes me hurl when I’m sick that way.

If she IS dairy-intolerant or allergic, definitely try Almond Milk. I like the Silk brand best. Vanilla.

poor little one, hope she gets well soon

We had the stomach bug a couple weeks ago. It hit all four of us plus Grandma. No fevers, but constant vomitting(and diahrrea) for a 13-24 hrs. My husband actually didn’t vomit…just the other. I hope it isn’t that though. If so, expect to have it in the next 1-4 days. It’svery contagious.

One of the pediatricians I’ve talked to said that allergies and food intolerances don’t always show up right away. This was true for my oldest. She seemed fine with dairy products until she hit one and then reacted hugely! Had to take her off dairy and soy completely. She still has a hard time with them at 3 years of age. I hope for your sake your little one just has a bug. It’s not fun trying to find/make food without dairy.

Sounds like she has a milk allergy or dairy intolerance. Both my kids are allergic. Vomiting and upset stomach are systems for both. Be sure to check her for hives. JJ got hold to the Mr’s cereal bowl and he immediately got hives all over his stomach.

Hope whatever the issue is that J feels better soon and you all get some answers. We’re just getting well over here.

Hope you feel better soon lil J! Is this the first time she’s sick? I don’t remember you ever mentioning a sick day before. If so, that’s pretty good!:) Most babies are constantly sick, especially the first year. No fever?! Consider yourself lucky! You did the right thing by calling in and staying with her.