Shouldn’t You Bring a Date to the Wedding?: He Says/ She Says

“Hey, are you suppose to bring a date to the wedding or am I not invited or what?” I asked my husband as he told me his plans to attend a co-worker’s wedding last weekend. It was a couple days before the event and he had never mentioned bringing me with him.

“Do you want to come? I mean, I’m sure it would be ok if you came, it’s not like you weren’t invited. I didn’t know if you wanted to go,” he said. “But I was just going to go with some guys from work.”

“Well, I mean, I’m fine either way. Normally I thought you’d bring a date to a wedding though.”

I haven’t been to a slew of weddings myself, but the few non-Mormon ones I’ve attended definitely seem to be a “bring a date” (or definitely your spouse) type of event. 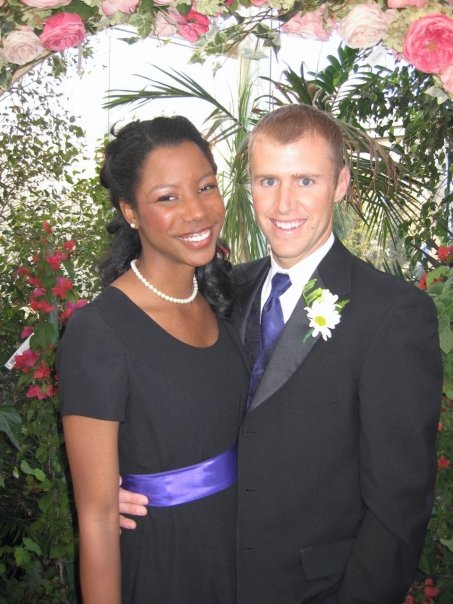 (Pictured above is us back in 2008 st his sister’s wedding).

I didn’t push it. My husband rarely gets out, and if he was looking forward to a night out with friends I didn’t want to get in the way of that. I figured they had talked about it and worked it out.

Saturday rolled around and I took the kids out while he went to the wedding. Minutes before it started I get a text from him.

He says: I should have brought you.
(I’m thinking): Ha! I TOLD YOU!
She says: It’s ok, just don’t grind on anyone on the dance floor.

I thought he felt bad for not bringing me but the longer I thought about it, the more it seemed likely that he was embarrassed about not having a date.

About an hour later I get a text from a friend.

Friend says: What are you guys up to?
I say: The kids and I are at a birthday party and B is at a wedding.
Friend says: Alone?!
I say: I know right?!
She says: WHY?
I say: I think he planned on going with friends…
She said: Like a bro fest watching a football game? Hahaha.
I say: Ok, so I’m not crazy, that IS weird?
Friend says: Yea, that’s weird. I would have started a fight over there! You’re so nice!
I say: Well he’s probably paying for it now.
We say: HAHAHAHAHA

A couple hours later I check in with him (who also volunteered to be the designated driver).
She says: So are you the only one dateless?
He says: …
She says: How was the wedding?
He says: Everyone is dancing. Awkward, I’m by myself!
She says: So were you like the homecoming chaperone driving everyone and their wives to the party?
He says: They’re all drunk now, they won’t remember this later.
She says: I asked if I should come, people normally bring dates to weddings.
He says: Yea, would have been nice to know… Yesterday!

He came home and told me how everyone asked where I was and he had to sit alone and have seating rearranged. It was awkward but he couldn’t leave because he had to drive people home. If you know my husband you know sad/hilarious this is.

He apologized and said he’d never make that mistake again, (though all of our friends are married so the opportunity seems unlikely now anyway). I went easy on him since I knew he felt bad about the situation already. But don’t get it twisted, I’m going to enjoy using my “your wife is right” card for a quite while.

Did you know it was common practice to bring a date (or I mean, at least your spouse) to a wedding?

Tags: He says she says, he says/ she says, marriage, weddings

I went to a few weddings by myself. Never thought it was a big deal. Though they were relatives’s weddings and I have plenty of single cousins. We kept each other company. I moved 3000 miles away from my friends for college and I just wasn’t around when they finally married. IDK that it would have mattered though. I’m just that kind of person. I am fine watching others paring up

Thanks Yvonne, maybe he was just thinking it would be pretty laid back like that. And maybe there were other dateless people there, though I doubt they were MARRIED. ha.

Hi. I am not a regular commenter but I read regularly. So, I am sitting in a playground and because I laughed out loud I had to share this story with my fellow mommys. The consensus of four moms (and a dad) are that we are shocked that he didn’t take you to the wedding and three out of five actually viewed it as a slight. One mom would like to know how the invitation was worded.

Ok so I’m not imagining things. He texted me the invitation which was generic about when and where but what I should have asked for was the envelope which I’m guessing most surely addressed both of us. Goodness gracious.Thanks for chiming in for this very important discussion Em!

We haven’t had a wedding invite in years, but the last wedding we did have an invite to I was the maid of honor in. It was my oldest and dearest friend since 7th grade, husband (boyfriend at the time) didn’t want to go all the way to FL and participate in all the activities. 2 days in and he was kicking himself for not coming with me. I think it set in that I’d be dancing with other people! I was in the wedding party, would have been wierd to sit on the side lines.

Wow, see that’s interesting too because you had to go out of state! Had it been a traveling thing I think I’d understand not paying for an extra flight, childcare etc. How cool you were in the wedding party!

In general, for the weddings I have been invited to, the invitation is usually addressed to “and guest.” I have been to weddings both with and without a date, and I have sent my husband to weddings without me. It depends on the wedding, I think. Family weddings are a no-brainer – you bring your spouse and the kids! Friend weddings – bring your spouse, unless it’s a 3 hour drive away and you have a 6 day old newborn (true story). Coworker wedding… tricky – since I don’t know my husband’s coworkers, I would tell him he can go with the others. Although, I am a sap and love weddings 🙂

I’m so confused by this. Invites are normally to “Mr. and Mrs. Name” if the couple knows you’re married. And on the RSVP card, you have to specify if you’re bringing a guest. Did he not actually get a formal invite for the wedding since it’s a co-worker?

I definitely go by what’s on the invitation, as usually it’s a Mr. and Mrs. or “and guest” thing. I think it’s a bit tacky to NOT invite a date, particularly if someone is married or seriously dating, but I guess there could be circumstances. Once I was actually invited to a wedding without a date, but my fiance was going to be in town with me, and at that time I hadn’t even really ever heard of not having a date, so I asked if I could bring him. They said yes, but I have no idea how awkward it was on the other end to switch things around or whatever. After the fact I felt terrible about it, like it was a major social faux pas, but oh well. I’d say that if it’s not specified, just ask!