Ariel is Black and People are MAD but Here’s Why We are Here for it!

We are finally getting our 2nd Black Disney Princess. A black Ariel! And this time we may actually get to see her face on the screen for more than 22 minutes (Tiana, I got you!).

When I first heard Disney was doing a live action version of The Little Mermaid I let out an exasperated sigh. Another live action remake from our childhood, can we please get a new hobby? But I’ll admit, after Aladdin, they’re bringing me back around a bit. Then, today they announced Halle Bailey as Ariel.

I read the emailed press release from my phone. “After an extensive search, it was abundantly clear that Halle [Bailey] possesses that rare combination of spirit, heart, youth, innocence, and substance — plus a glorious singing voice — all intrinsic qualities necessary to play this iconic role,” says director Rob Marshall.

I’ll admit I didn’t recognize the name when I opened the email but as soon as I saw her picture I gasped. I turned to my husband who was laying next to me and said “Look who they cast as Ariel!” 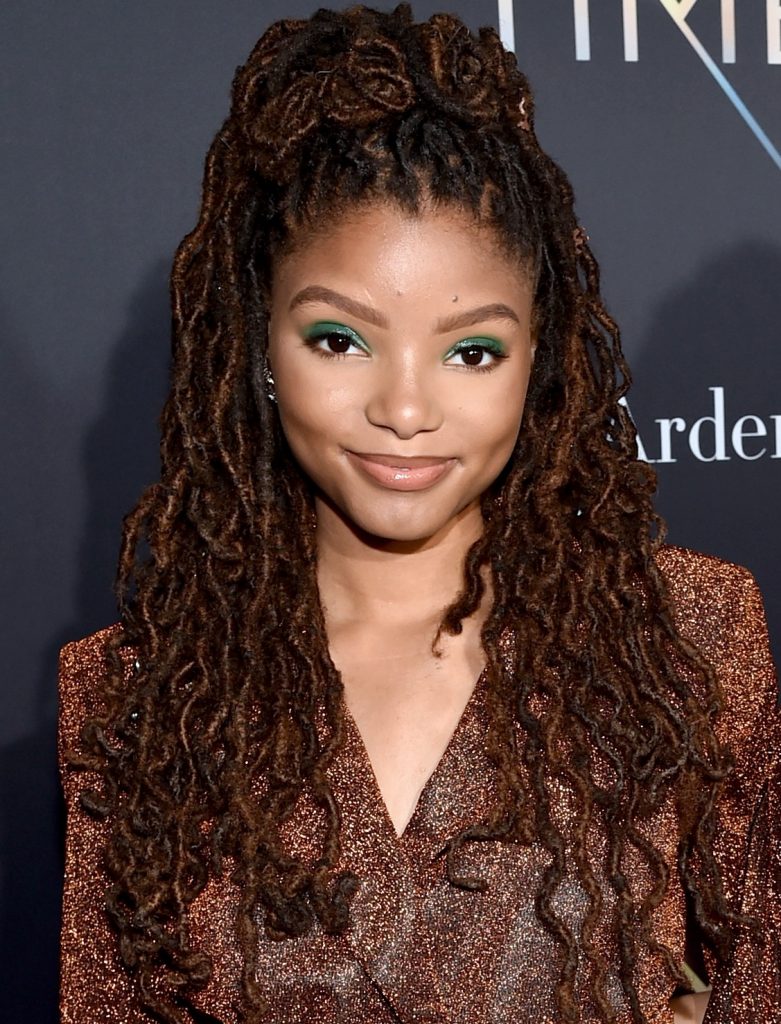 Both of us were pleased. Actually pleased is an understatement for me. I’m THRILLED. Imagining all of the merchandise that returns when Disney does a remake. Our little girls will have little black Ariel dolls with brown skin, and you guys I’m here for it.

I distinctly remember Halloween my kindergarten year I wanted to dress up as my favorite princess: Ariel. I donned the mermaid costume, red wig and all. The stomach part was a nude color. Obviously nude isn’t the same shade for everyone. So there I was with my dark brown skin and a white midriff section. Did I care? Nope. But looking back at that now, I’m hopeful that my daughters will have more options.

Unfortunately not everyone is happy about this. Disney Family shared the announcement on Instagram this afternoon and it was met with a surprising amount of disappointed comments. 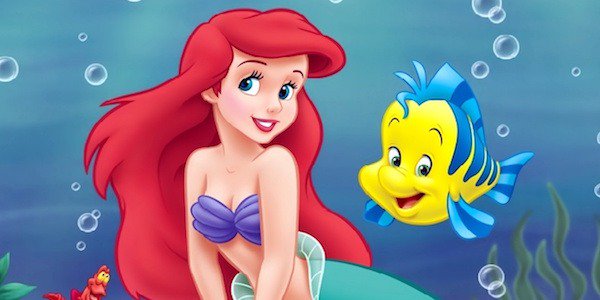 One of the top comments for instance says:

So bad disney you ruin and play like this with our childhood, if you go make an adaptation of your own movies, respect the design and ethnic origins of each character, Ariel is the princess with the unique characteristics! his red hair with its contrast of white skin and no, it is not racism, my complaint and my annoyance would be the same if when doing a live action of the princess and the frog, choose a white actress to play Tiana, it would be just as annoying.

And there are lot of comments that start “I’m not racist but…” (never a good sign) and “This diversity thing is going too far!”

I’m sorry that seeing people who don’t look like you is getting annoying. Imagine how I’VE felt my entire life! But have you seen me complaining?

First of all when has Ariel’s skin color ever been a part of the story? Oh wait, it hasn’t. Tiana is from New Orleans and in the story was put down by people because of her I quote “background.” This is not the same. Ariel is a mystical mermaid and if you ask me, the perfect Disney princess to shake things up.

I will admit the red hair is a standout feature to me and was for my daughter too. 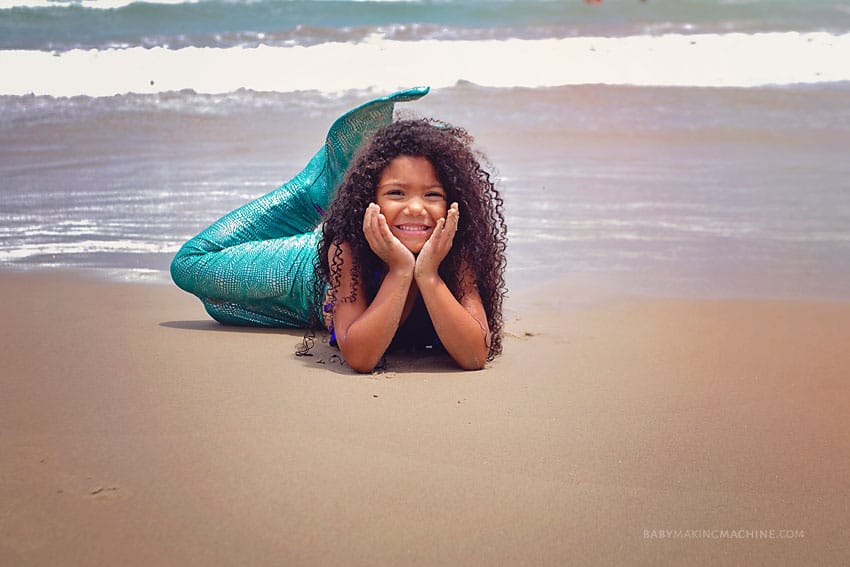 Ariel has been one of Lil’ J’s favorite princesses (on and off, it’s hard for her to choose a favorite) for years. She dressed up as her when we went to the beach, and every time we visit Walt Disney World she’s the princess to meet. I showed her a picture of Halle Bailey and she immediately smiled. “I like her hair! She’s pretty!” She said. “Her hair is like mine. But do you think they’ll add some red braids?” Red braids or locs on Ariel really would be something. I hope it’s a consideration (and from some sneak peek stuff I’ve caught glimpses of it looks like it will be!).

Lil’ J was also concerned about her singing voice. So we did a bit of Googling and were so happy to hear Halle has the voice of an angel. Actually she sang one of our favorite songs from the movie Wrinkle in Time. We oogled at her beauty in that music video. 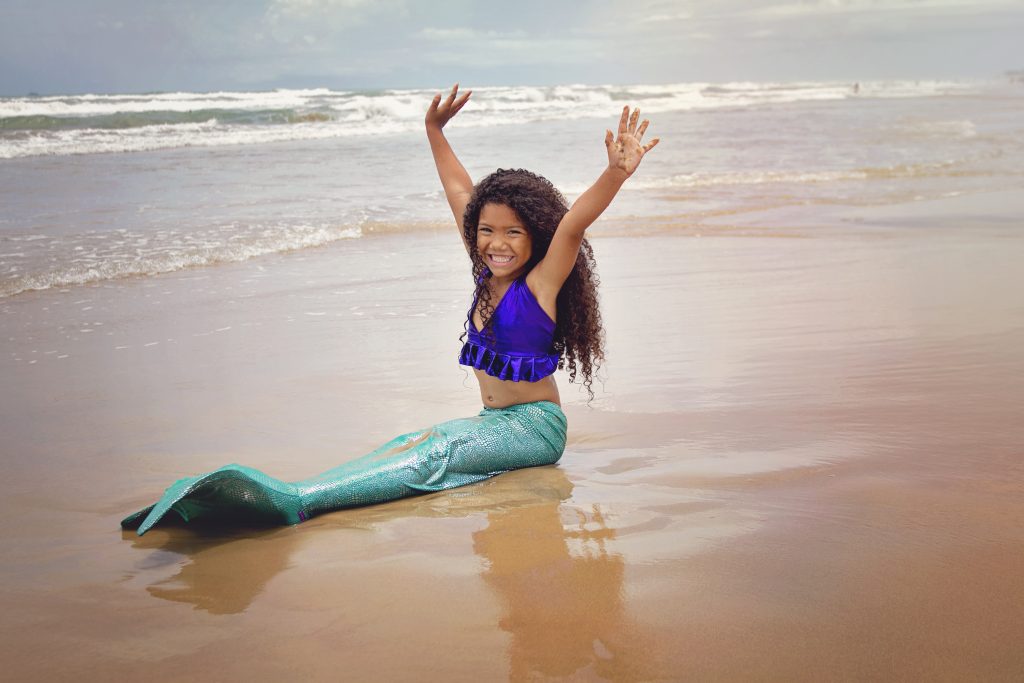 I’m so thankful that Disney is taking this risk and giving the world another Disney princess of color. I’m sure over the coming months (years?) leading into its release we’ll hear complaints and grumbles but I hope that there’s more support and cheers. If you want the same pale skin, red-headed mermaid from our childhood you can watch the 1989 version. I’m ready for something new.

Production is anticipated to begin in early 2020. Let the countdown begin!

This will be Disney’s 3rd princess. Princess Shuri from Black Panther is a princess. 😀

Ooh, she is beautiful, I’m excited to see her play Ariel! I think the original Little Mermaid story has Danish origins, so I guess that could cause people to expect a fair skinned person, but I’m glad they’re changing things up. It’s sad that people are criticizing this, it doesn’t take anything away from the magic of the cartoon version to have the live version be a princess of color. I can’t wait to see who the rest of the cast will be. Should we all brace ourselves for heads to explode if they cast a white actor as Eric and we have an interracial princess relationship? That would be so cool!

Black can be as beautiful as any white can be. I don’t understand the problem. Maybe being white I’ve not got the proper perspective. It’s Disney’s character they can do as they please. Besides this is healthy for all of us to see and enjoy. Who is to say that Ariel isn’t black? In this case black is beautiful actually gorgeous.

I hate that people are so close minded and can’t see that anyone else can play the part. Ariel doesn’t have to be white and redheaded. Just because the original story was set in Denmark doesn’t mean it can’t be adapted. Hello… remember that Brandy played Cinderella back in the 90’s and we were all for it!

I totally understand where you are coming from but completely disagree. I am a red headed white girl. It didn’t bug me that Halle was cast because of the color of her skin. It wasn’t about diversity or racism at all but I believe that played a part in Disney’s decision. What bothered me is that Ariel is not a mystical mermaid. She is of Danish descent. If you are a true die hard Ariel fan you would’ve known that. And therefore should’ve been cast accordingly. If a white girl had been cast for Tiana, Pocahontas, Moana, or Mulan there would be the exact same “background” issues. If Disney’s purpose in remaking these classic Disney films in a new and thrilling live action version they should stick to the original movie as much as possible. The purpose of recreating these films is to bring Walts films back to life and expand on the story. Not change characters and their ethnic backgrounds. Growing up Ariel was always my favorite because she was a white redhead! Not a blonde or brunette princess. I understand where you are coming from completely but I think they should’ve stuck with the Ariel we all know and love that Walt created. It’s hard to believe that he would’ve been happy with all the controversy over the casting of a beloved character.

I appreciate you stating your opinion. When I referred to her background as a mythical creature I wasn’t referring to the Hans Christian Andersen, which actually has a super sad ending, but the Disney version, where her Danish decent was never mentioned or referenced. Also, can there not be black Danish people? I also love how Disney is expanding their films to be even better, not just recreating the movies as the exact same as the original. I personally LOVED how Jasmine in Aladdin had her own songs this time around and became Sultan at the end. I know now everyone loves that but I think these changes are so great for our children these days. We lose nothing, and still have the original versions to enjoy. We’re going to be ok 😉