Is Santa Real? And Other Questions I’m Dreading This Time of Year

I’ve been preparing myself to handle the “where do babies come from?” question for some time. I feel armed and ready with scientific explanations and counter responses. Instead, the question I got this week was “Is Santa REALLY real?”

My daughter hasn’t been in public school for a year and a half so it’s not like she came home from school crying about what some kid told her on the playground. My 13-year-old sister is still convinced about Santa, so no idea where this was coming from. We were watching Christmas movies and the question sort of popped up out of the blue. 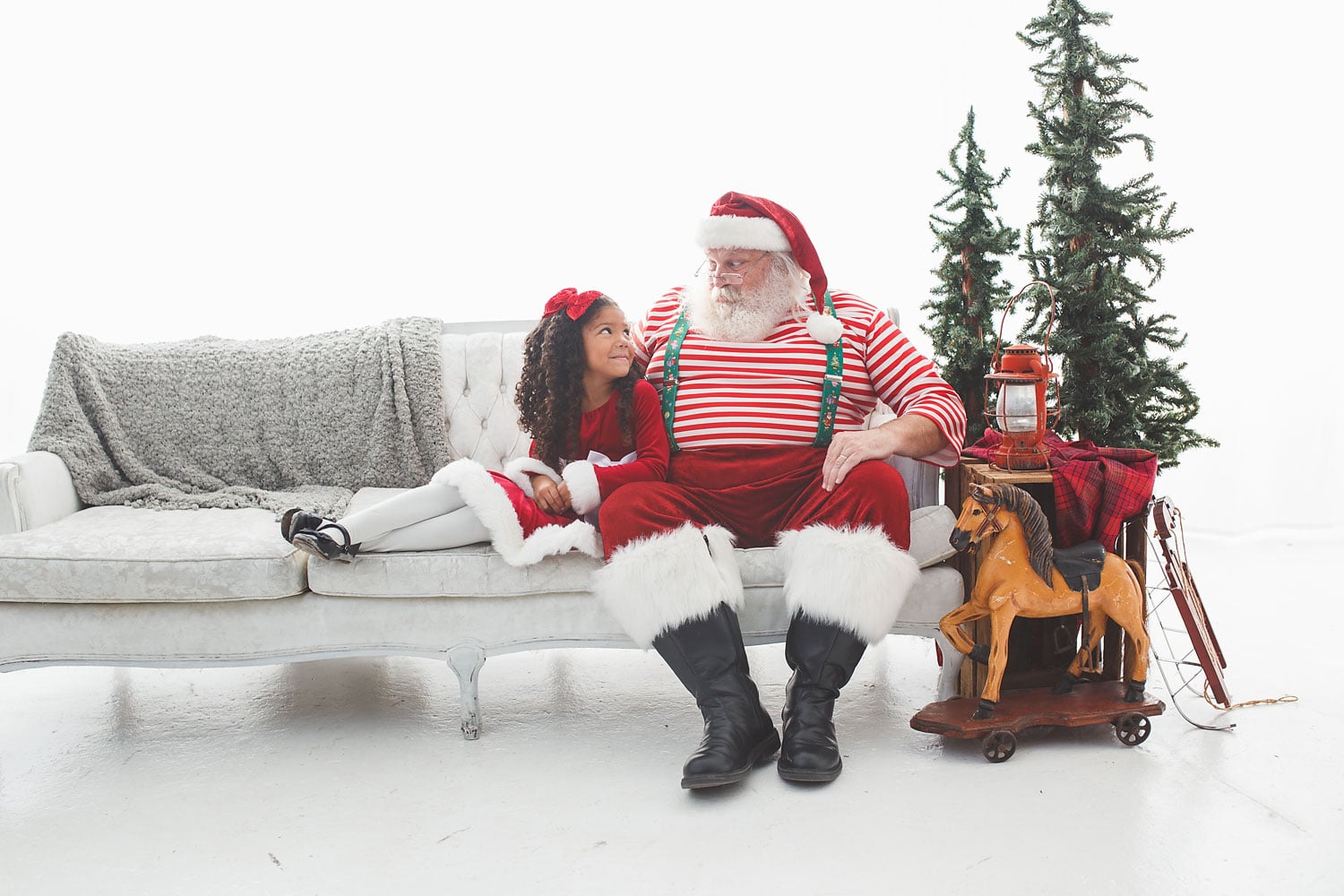 ‘Well duh…’ Was honestly the first thing that came to my mind. But I held back that response and instead went with “Well, who do you think brings you your presents?”

“Well I think it would be hard for Santa to do all by himself so maybe he has lots of helpers that drop the presents off,” she suggested.

“Yea,” she went on. “And they sneak into the house and put all the presents under the tree.”

“So who do they work for?” I asked her. “And who’s the guy you took pictures with?”

“Well I know some are just helpers cause I saw a string on one Santa’s beard,” she said.

“Oh ok, what about the one we saw this week?”

“He didn’t have a string, so I think he was the real one,” she said.

As if on cue the next Christmas movie to come on was a Disney short about Goofy and his son Max having the same discussion. My daughter watched the whole thing like Yea! Same questions here! In the end the moral was a mix between Christmas being about serving others and creating happy memories for loved ones (I was cool with that). And also Santa being there for those who believe (I was cool with that too).

Now that that crisis is averted for now I’m doing mental acrobatics thinking about what else to watch out for this year that I may have forgotten about. Like for one, my kids finding their gifts. After that whole talk I’d hate to blow it with a whoops like that. When I was a kid playing hide and seek with my sister I hid in a pile of dirty laundry that also magically contained our Christmas gifts. I didn’t speak a word of it. Ever. Somehow I knew better. We don’t have a ton of hiding space in our home so we may have to resort to the attic this year.

On a more serious note, another hurdle to prepare for is holiday parties and kids asking for a sip of alcohol. When we, or more likely, our parents were growing up I don’t think it was a big deal for parents to offer their kids a sip in hopes that it would deter them from wanting to drink more. But studies have shown it can actually have the opposite effect.

I couldn’t believe this statistic but 37% of kids by the age of 8 have had a sip and that number rises to 66% by the age of 12. Most 6-year olds know that alcohol is only for adults. Then between the ages of 9 and 13, children start to view alcohol more positively. Many children begin to think underage drinking is okay. Some even start to experiment. We don’t drink alcohol or have in in our home but my daughter still sometimes asks me if my sparkling apple cider is wine. I’m sure to tell her it’s not, but thank her for asking and I tell her if she’d like she can try some of it because it doesn’t have alcohol. She politely declines because “I don’t like bubbly drinks.” I’m hopeful we’ll continue to keep these lines of communication open and honest with each other.

So being open and honest about alcohol and babies? Easy peasy. Santa? That’s another story. Now I’m not necessarily someone who is going to try to push this longer than it needs to go, but when it comes to Old St. Nick, and Disney World characters, I’m hanging onto the magic as long as I can. And if not, well, then at least I’ll get a break from moving the dang elf around.

Ok so I’ve got lots of questions for you today. Did your parents give you a sip of alcohol with you were younger? Do you do that with your kids? And for heaven’s sake, where are your good present hiding places?

I’m a #TalkEarly ambassador helping to spread awareness about the importance of talking to our kids at a young age about alcohol safety. Though we don’t drink it doesn’t mean it’s a topic we should ignore. You can log onto the #TalkEarly page for more information on building a lifetime of conversations with kids around alcohol responsibility. Responsibility.org sponsored today’s post, however all thoughts, opinions and stories are my own.

I am really surprised to hear that letting kids take sips of alcohol can increase the risk. Hmm.
My parents often had a drink with or after supper, though I never saw them overindulge. They would say things like, “I’d better not have another, that would be too much.” Or they would not have a drink so they could have one later. But they always let us take a sip, if we wanted. And out of five of us, three don’t drink. We don’t like the taste of alcohol, and because it wasn’t forbidden, it wasn’t particularly interesting. The other two drink on occasion, but not much. I always thought my parents responsible and moderate approach to alcohol was the cause of none of us drinking much. Maybe my parents example of how to drink responsibly was best and not the letting us take a sip if we wished. Hmm, those studies are really interesting and not what I’d always assumed.

I don’t know if I ever sipped alcohol, but my dad used to give me olives out of his after-work martinis sometimes. I liked those a lot but I still don’t think I’d like a martini alone! I have not offered up alcohol to my kids…and don’t plan on it! Makes it a little easier that my oldest has Celiac disease and I can never remember which alcohols have gluten in them…so even if I wanted to, I couldn’t! I think some parents just do it because their kids bug them and they think they’ll hate it, but it doesn’t always work that way!

When I was a kid, my mom hid presents deep in our basement in some old lamp boxes stacked up in a corner. I have no idea how my brother found them one year, but he did! While it was fun to look, it sort of made Christmas morning a little less awesome, so I pretty much learned my lesson. The Santa thing is tough. My 9yo seems to have some doubts and asks us straight out once in a while. We were watching Rise of the Guardians the other night which features all of the characters of our childhood, and that got things going again! We try to stick to “If you believe, it’s real, and if you don’t…well, that’s the risk you take.” I’d probably have spilled a year or two ago because the oldest keeps asking for crazy expensive stuff and can’t quite grasp that Santa might have a budget…but I KNOW he will tell his little brother the truth (and I want to spare his classmates, too), so we’ll keep it going as long as we can. An old Parenting blogger, Kathryn Thompson, who now does the Drops of Awesome blog/books, had a great way of ushering her daughter into the post-Santa phase, and I may try to adapt that someday.

I was totally like your sister 12 years old and 100% on the Santa train no matter what my friends said.

My friend works at a treatment center and she gets Addiced that come through. Many of them say that they can remember being very young and being given alcohol and then that escalating over the years.

I remember when I was a kid, I take a sip of beer several times, drink some wine, but I had never tried alcohol.
Love the conversation about Santa.

This is so bad for the kids to take alcohol or even any one.Santa explain in such a great way to keep away from these things at-least childhood time.