I sat on the bed in the nursery with Lil’ J. We were playing with some of her toys for the first time. I dug them out of her toybox. A rattle, a soft block, and Sophie the Giraffe.

I only took Sophie out periodically to show it to her but my daughter never really showed much interest. She’s a fancy squeaky chew toy for babies, created in Europe, sold like crazy in the US to almost every green-fanatic mom I know. You know, the moms who shop at Whole Paycheck Foods. A line of moms in our yoga class each had one out during class. They’re in high demand lately because the toy in hand-painted with “natural-food-paint” and “natural rubber.”

I got my Sophie toy in exchange for writing this post and was so excited for Lil’ J to play with it. I was also excited to get it for free since $25 seems like a lot for a toy.

As we played on the bed, and I squeaked it at her, and kissed Sophie to her nose. Snoop watched with excitement outside the room. He’s not allowed in the nursery so he knows to stay on the other side of the threshold. But out of excitement when I was squeaking the toy he ran in and jumped on the bed. I yelled at him and my husband yelled at me saying I was teasing him. Ok, so maybe I was. Not intentionally, but I did hope that by watching, he’d see that it was her toy, not his.

That was the last time I saw that little giraffe.

A few weeks ago Lil’ J stared grabbing things–Everything–and putting it in her mouth. Last week at yoga I saw the line of giraffes and made a mental note to bring it next week. But when I went back in her nursery it wasn’t there.

I looked all over. Under the bed, under the crib, in her toy box. She’s gone.

I think she died, and I know who killed her. 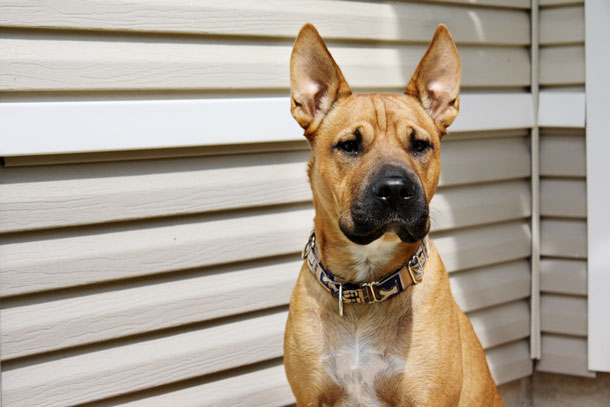 I can’t prove it. I haven’t found any giraffe remnants but I wouldn’t put it past him to have devoured the whole thing. I considered examining some Snoop poop but decided since it was made of “natural rubber” it probably was just reabsorbed into his body or something.

You’d think I’d let it go, but every time I’m out I see this toy everywhere. I live in the Whole Foods Mecca and it’s haunting me. So I just ordered another one on eBay.

I hope she is mesmerized cause $17 is a heckovalot of money for a baby chew toy which can easily be mistaken for a Snoop toy. But this time I’m putting that thing on lock-down!

It’s quite possible she ate the giraffe: I’m sure she did. Thankfully, the rubber was natural!

Dixie loves her Sophie, but we got ours for free from a lovely Twitter mom whose daughter did not particularly care for it. If we didn’t get it for free we wouldn’t have one that is for sure.

Too funny! Snoop, what a sneaky fella…lol

Aw, poor Sophie! We already have one for Elliot… hopefully he actually likes it. It {does} seem a little overpriced to me!

Lol! Poor Sophie! Who knows though…maybe Snoop hid her away and may bring her back in one piece one day!

Our Sophie had to be on lockdown too. They do turn great pooches into drooling thieves. As a plus side, now Babies R’ Us carries them in store, and in plenty. I think the price tag is a little more reasonable too. They also have the little mushroom guys.

We went through many a binky before out dog realized that binkies were NOT for dogs. He’s stayed far away from toys though. It was the binkies that he was all about.

Aww poor Sophie may she rip.. I love the picture of the dog lol Thanks for sharing

Oh, Snoopy was just doing what all big brothers do–steal toys from their little siblings. He probably just did it for attention. LOL. $17–WOW. You better save that for me when you’re done with it. I made need it in a few months-years. 🙂

I thought we lost our sophie once (he’s “jeffery” in our house) and it was tragic. Luckily I found that darn giraffe. He’s my daughter’s FAVORITE toy. The dog gets in trouble a lot for trying to chew on him, but come on…it’s a glorified dog toy!! But there is something magical about that giraffe. Makes my kid happy so I’m ok with that.

On the up side it will only be a few more months and all the Doggie toys will be in lock-down too. For some reason they attract mobile little peoples and in our house have been know to end up in dolly’s bed or in the bottom of a science experiment testing gravity (which usually wins). So either way you will have a house full of toys for each which neither will play with cause the other toys “the-special-ones-i-am-not-allowed” are so much more inviting.

lol. That’s so freakin’ funny. But how can you blame Snoop when he has such an innocent little face! lol.

LMAO. That was just too funny. Poor Sophie! And poor Snoop! 🙂

Way too funny. I was lucky enough to purchase Sophie with a giftcard I won so I only paid $6 (got the kids Toy Story 3 also). Kay loves her and will go after her almost always unless she is cranky and then usually her squeaks will make her stop crying. My older 2 (almost 4 and almost 3) also love Sophie and are constantly stealing her. Plus side is if Lil’ J doesn’t like her you can always resell her 🙂

Poor Sophie!! She just looked to yummy for Snoop to resist. I’m sure he’s very sorry for eating lil’ J’s toy though. Hopefully, the new Sophie will not follow the same fate.

Austin loves his, but just recently

I’m just waiting for one of our dogs to eat one of my daughter’s toys.

my lil guy was iffy about sophie