When to reveal the Disney surprise?: He says/ She says

We’re eagerly planning (ok well, I’m doing most of the planning, but we’re both excited about) a trip to Disney World in February. It’ll be Lil’ J’s (and of course Big T’s) first time there, and my first time in about 20 years. Ever since we locked in the dates of our trip I’ve been thinking non-stop about what we’re going to do, where we’ll eat, what rides we’ll go on and what Princesses to meet.

I’m wise enough to know I need to keep a “loose plan” because hello!… We’ll be traveling with two young kids. But I want to be aware of the big things we won’t want to miss.

The challenge with all this is trying to plan in secret. Lil’ J has no idea we’re going to Disney World, even though her daddy promised her we would go after she turned four. We’ve been debating when to tell her and came to a bit of a disagreement. 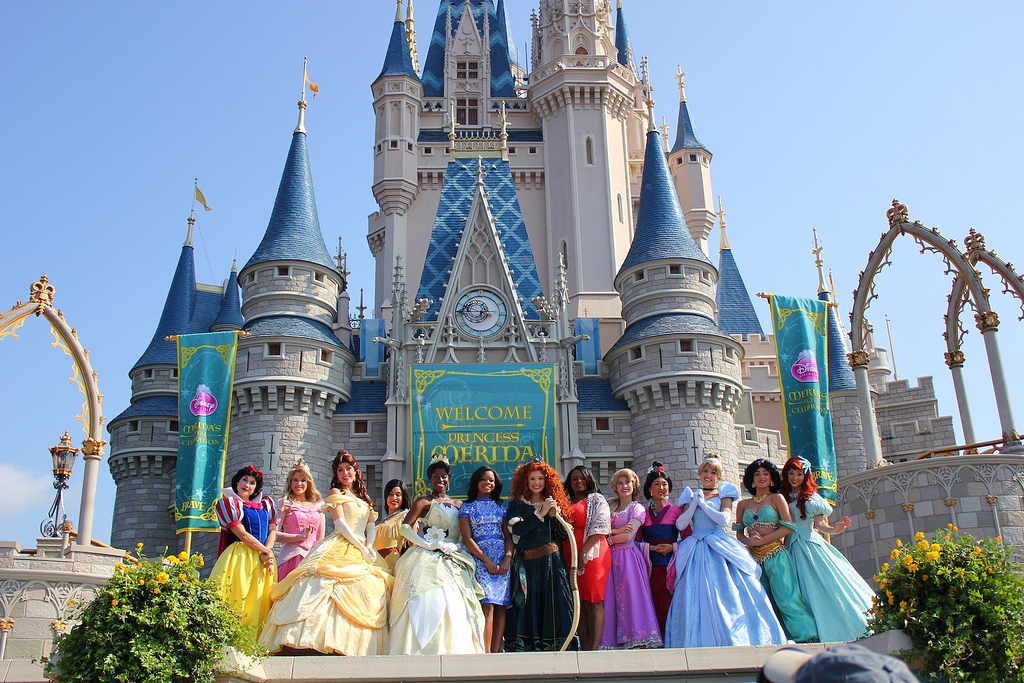 She says: We should make this their Christmas present!
He says: What? No, they’ve gotta get more than that for Christmas.
She says: Well of course! I mean Santa will bring them the rest, and we’ll gift them a surprise announcing our Disney trip.
He says: Ok. Well, I was thinking we should just tell her right before we left to get on the plane.
She says: But that’s no fun, she may want to be involved with the planning process, and the surprise and excitement can build up for months.
He says: Ok Sure.

Now I don’t do this often enough. But the truth is, after that conversation I went back to my husband and told him he was right. There’s no way we can surprise out daughter with news of an upcoming Disney World trip and she not nag us with, “ARE WE GOING YET???!” for two months. Heck, I told her we were going to one of her friend’s birthday parties three weeks before the event and she asked me every day, multiple times a day up until we went. And she still asks me when we can go visit her again more than a week after that party. Maybe it would be best to surprise her right before we go so when she asks when we’re going we can proudly exclaim “TODAY!”

I am eager to still build up a little excitement, hopefully without ruining the surprise. Watching old Disney movies, getting refreshers on other Disney characters like Pooh Bear and Mickey Mouse. I may even get one of those free Disney World DVDs to watch and talk about maybe going someday. That way when she hears the news of where we’re going, she’ll actually know what it is.

You know me, I can’t plan this whole surprise without planning a big reveal for the kids. No idea how we’ll do it yet, but I’m working on it. Have any ideas you’d like to share? So far I’ve loved the “Mickey call” idea where he calls and tells the news on the phone. It would be easier to have an audio or video explanation in case she can’t read it yet.

Have you ever surprised your kids with a trip to Disney, or were you surprised as a kid? How did it go?

We went when my son was 3 and told him a month before. I made a count down calendar and he put a Disney sticker on it everyday. My brother-in-law and his wife took their son around the same age and they made a paper chain where he took off a link everyday. Both things were fun but, yeah, there was a lot of asking when we were going.

I love this idea! I was picturing this in my mind when we revealed at Christmas. Making a Mickey and Minnie paper chain. Ride-scoping on YouTube. Lol. Maybe I’ll change my mind again, but knowing my daughter it would be a discussion more often than I’d like. Haha

When do yall want to take the twins?

I also want to surprise my kids with a Disney trip. Hubby is the one that wants to tell them ahead of time. I just don’t think that I can take the “Are we going today? Tomorrow?” questions for too long leading up.

Will you share some of your planning on your blog (after you tell the kids of course, since they may hear from someone they are going)?

I would tell the kids in advance and count down, I’m not one to get them used to “instant gratification” 😉 I’m sure it will be fun for them, and you!

Honestly, I would never bring my kids to Disney that young. I went when I was 12 and it was great because I could go on all the rides and enjoy it to the fullest, not to mention my parents didn’t have to deal with tantrums, tired kids, or the general exhaustion of little one. Of course, because I turned 12 I couldn’t even dream of going anyway, we lived in a different country, no Disney there and we couldn’t travel that far. Mine are almost 6 and 3 right now, and if we ever go it would probably be when they are 12 and 9 or so.

Haha. Good point about instant gratification. I think my kids have enough delayed gratification to be ok with this one. And we will still have flights and a day wait before we’d arrive. Who knows, we may still change our mind. I’m mostly for selfish reasons not wanting the daily questions. 🙂

I know Lil’ J will love it. She has a great personality for going with the flow. Big T may be moody now and then but he can nap in the stroller and he’s free anyway 😉 I hope to go again when they are both older and can enjoy different things about it (and he can remember). I think 12 and 9 are great ages to go!

I’ll definitely share the planning! I’ll try to keep noting its a secret and hopefully we won’t spoil it 😉 my plan to cover up is “yea, we will go ‘someday!'”

I love the idea of telling them the morning of! My kids would probably die of excitement if they knew we were going to disney that day!

Yes, we told them the day of. They were excited and there was no weeks of questioning and distractions. The older one was almost 5 and the younger, almost 3. I personally wouldn’t advise doing countdowns because while they are cute, they aren’t practical for little kids.

We just got back from disneyland with our 5 and 13 year olds, and the trip was GREAT. My five year old was tall enough to go on almost all the rides, but young enough that everything was still magical! Yeah, Big T won’t get a lot out of it, but like you said, he’s free anyway. I would probably surprise them about a week in advance. Then they can have the excitement of counting down, but not have to wait TOO long. I downloaded a disneyland app and my five year old loved looking at the all the rides before we even got to disneyland. And all the way home he wanted to look at the app again and relive the memories! And I also love your idea of having Mickey call.

Oh, and about telling them at Christmas, we’ve learned that it’s a mistake to make christmas all about huge surprises, because then when they get older, they expect something big every year! We learned this lesson the hard way!

I think this is such an awesome idea!! Surprising our kids with a Disney trip is something I’ve always wanted to do. Long ago, I saw something online where the parents revealed the trip to the kids once they actually arrived at Disney. They pretty much packed up the car, drove, and drove, until they ended up in the parking lot of the actual park. Kids were totally shocked! Not sure how well this would work out for me or for you, but hey, the thought alone of a surprise Disney trip is just all around awesome! Have fun!!!

I love the day of surprise idea! I teach 1st grade and I had a family surprise their daughter on the last day of school. She was super excited about it and I loved seeing her reaction.

We are going in February too! Our little lady will be 4 in in February but we tend to keep things secret from her til almost last minute…. mainly because the questions will not stop 😉

I’m sure you have seen this before but if not..it’s my favorite Disney trip reveal..so cute! https://m.youtube.com/watch?v=OOpOhlGiRTM

Oh man, it’s been a while since I’ve seen that one, loved it!!

When my parents took my brother and I we found out the day we went. We were a little older so I’m not sure why they waited so long to tell us- I think it was “wow…toady?!” affect.

I took my son when he was a year and a half and he had a blast! I don’t think your kids are too young to go. Plus you are a picture taker so they will always be able to look back at their trip through pictures and know that they had fun. I can’t wait to take my son again!

I’ve done it all different ways. We went in January 2010, when oldest boy was 3. We told him right away and he was excited the whole 6 months we were planning. January 2012, same thing. Told him (now a “them”) right away. THEN we were on such a high after the Jan 2012 trip and couldn’t wait to go back that we booked an August 2012 trip, but decided to drive my husband’s prius to save $$. (We live in NJ.) We put them to bed in their beds at a normal time, then put them in the car around 1:00 am and started driving. They (at this time they were 6 and 2) woke up somewhere in Virginia around 5:30 am and we told them where we were going. My normally excitable children were like “cool”. I don’t know if it was just because we were just there 7 months earlier, or if they were still sleepy when we told them, but I was expecting this awesome excited moment and I got “oh, cool”. THEN we planned a trip for end of January 2014 and told them Christmas morning. THAT was so fun. They were already on a Christmas high, and this was the first trip utilizing magic bands so we game them their bands for Christmas. SO MUCH FUN!!!!! I’d vote for Christmas morning:)

Funny…I was checking out your site on toddler haircare and see you’re visiting WDW in February also. The thought of what to do with his mane of coily qs in the early am is giving me a headache. The stress I’ve put myself through planning for our 2yr olds first plane ride is crazy, but I think I’m prepared. And WITHOUT MY DEAR HUSBAND’S HELP, no less. This guy thinks it’s no need to plan. Enjoy your trip.