A proud moment I shared with my children

When I was in middle school I remember seeing posted signs around the halls for a civic oration competition. I had an interest in public speaking, and a will to participate in almost every activity advertized around school, so I signed up.

We were given a set of rules, and a topic to write a speech about. I recall practicing mine over and over, but have no idea what the topic was. I did a practice run in front of a small audience and thought I was going to get crushed by a guy named Amir. He was also in the 8th grade, and his speech had everyone, including myself laughing along the way.

I spruced up my speech a little bit after our run through, trying to make it less dry, but in the end I pretty much stuck to my script. I hoped to get second or third place at best and was stunned when I won.

That was my first taste of presenting in front of a big crowd. Well… Aside from my fifth grade acting stint, but I sucked at that.

Since then I’ve presented at other events through the years. I spoke at my college graduation, I’ve emceed beauty pageants and nonprofit events. My level of suck has varied at each event. Fluctuating depending on the topic, but mostly my confidence.

Giving the main speech is something I was reluctant to put on my 30 by 30 list, because I was trying to be realistic, but what the heck, I jotted it down anyway. So imagine my surprise when I got an email asking to give the keynote speech at the Austin Birth Awards.

I thought it was a mistake at first. I’m not a birth junky… I prefer to call myself a birth fan. And I love having babies. So I guess that qualified me for such a task. Still, I gladly accepted and started Googling how to give one!

That along with the fact that my husband and babysitter were both working, and I’d have to bring the kids left me feeling very intimidated. But I decided I was going to do it, and do my best. 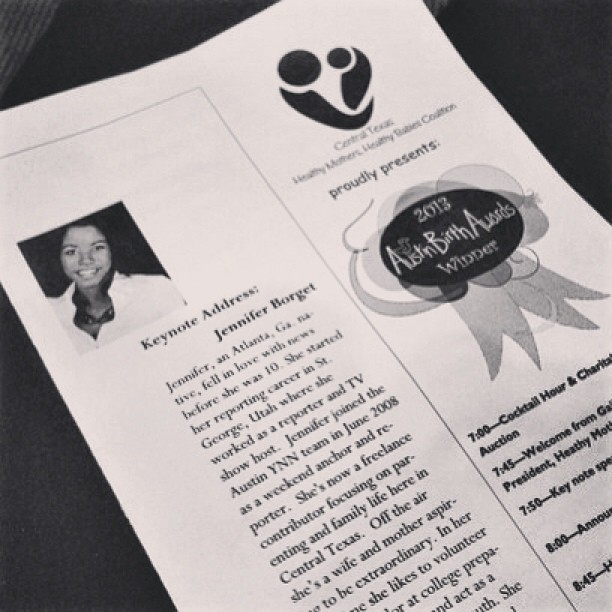 I recruited a helpful hand to hold my baby before going on stage, and I tried to prepare my daughter as best as I could well before the event.

“Mommy’s going to give a speech on stage and you have to stay with your brother and listen ok?”

She agreed. I handed her my iPhone and some goldfish as a last-ditch bribe.

I wasn’t so worried about my son, but my daughter, who might start yelling for me or worse… Follow me up to the podium.

All was well when I left them in their seats and started my presentation. I had rehearsed a few times that day, with my kids as the audience. I felt slightly nervous but mostly calm and confidant. I knew my material.

I mentioned the birth of my children and glanced down at them in the seats below, sitting amongst their friendly helpers. My son was starting straight at me, smiling the biggest smile I’ve ever seen. My daughter was inching her way closer to the stage. In that moment I was so proud. Glad they I could bring them with me to be a part of my dreams. It was like my two paths–Life dreams, and professional goals had merged right there in front of me.

If you’ve known me for any period of time you know how I’m constantly changing my mind about big plans, and pretty much have an epiphany of some sort on a weekly basis. This weeks realization… I want my kids to be a part of my professional success. Whatever it is.

Three quarters through my speech my daughter completed her trek to my side, and she tugged on my pants whispering: “Mommy? Mommy!”

I leaned over and asked her to go sit back down while mommy finished.

“But… But I want to say something!” She told me.

I picked her up and put her in front of the microphone and she grinned a big grin. I asked the crowd to say hi her her and they obliged, which just tickled her to death. Then I set her down to finish my bit. Lil’ J wasn’t ready to go back to her seat so she did a little tap dance protest behind me. 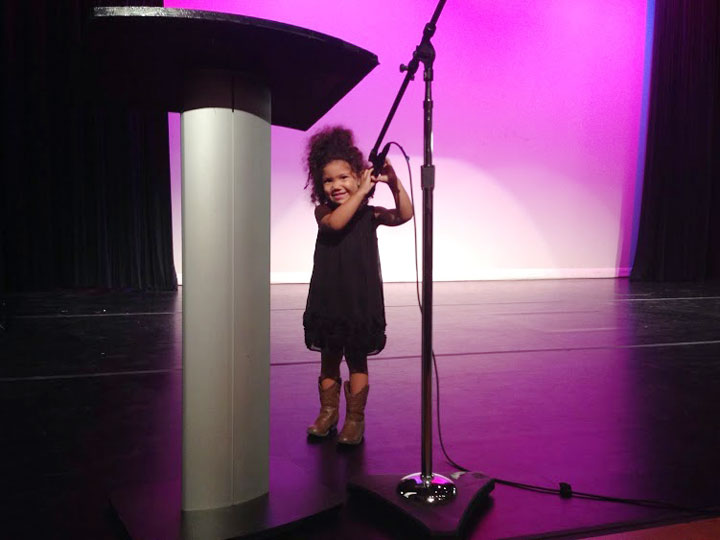 I finished my speech in a bit of a hurry, then carried her offstage. A few minutes later I was presented a “breastfeeding hero” award after doing a parenting segment about normalizing breastfeeding, while nursing my son on the news. I was definitely surprised, and honored, and Lil’ J loved her shiny new “crystal.”

After all the awards were doled out, and people cleared out of the auditorium, she still wanted to have a turn at the microphone. I took a few photos on my phone, knowing this is definitely one of those stories childhood I’m going to be embarrassing her with her entire life.

And as for her future in performing… Well, I think that’s obvious.

Congrats on the award and the speech! Sounds like great embarassment fodder for later. 🙂

Congrats on the well deserved award…and your daughter is adorable! 🙂 haha… what a cute interruption!

I know your family was proud of you. Congrats and what an honor. Lil J is such a cute kiddo.

aawww so sweet! Congrats on your award!

That is so awesome! YAY for breastfeeding while doing a news segment! That is so impressive to me – I admire your confidence A LOT.

Congrats to you and being able to have your kids witness this huge accomplishment! I still have so many amazing memories of watching my mom fulfill her big goals (including getting her Masters with 4 kids!) and am thankful she gave me and my siblings the opportunity to see her at work.

Lil’ J had her “hugging the Pope” moment. Love her little girl boots.

Thanks for the nice shares

This is the biggest moment of your life and Congratulate you on your success . I wish you all the best