Rush rush rush. When you’re in a hurry, everything gets immensely more frustrating. Well, I was in a hurry. My daughter and I had just come home from grocery shopping and we were about to go to her school to get more acquainted with her friends and teachers before her first drop off day. I wanted to be there before lunch and nap time so we were on a tight deadline.

We burst through the front door and Snoop was there to greet us. Excited as usual. I gave him a quick pat before heading upstairs to change Lil’ J’s diaper and grab a few things. When I opened the door to my room I saw what looked like a crime scene. Snoop had gotten into the bathroom trash and had torn up everything inside it. Leaving not only gross trash, but stains everywhere.

Sure, it was our fault for not having dumped the trash, but at that moment, I wasn’t in a good state of mind to think this though. I was sure I shut the door to our room but I must have forgotten to shut the bathroom door and he busted his way through to make a mess and eat nasty womanly things.

My anger was magnified by the fact that my husband wasn’t home. This was his first day of work and I had no one there to ask to help. For a split second I considered leaving it there until I came back, but I didn’t want him to beat me home and freak out.

I set Lil’ J down and used a wash cloth to pick up all of the trash. With every handful I screamed in frustration. Lil’ J whined from my screams, and I got more angry as she kept coming over trying to get me to pick her up.

Half way through my efforts I got so angry and I wanted Snoop to pay. I picked up my daughter, ran downstairs and spanked him on his butt. He knew by my energy approaching him I was not happy and sunk in the corner before I even reached him.

I kept saying “Bad Snoop” “Bad Dog” even though I know he had no idea what I was referring to. He had probably gotten into the trash more than an hour ago and had long forgotten his mischief.

I opened the back door and let him outside when I realized what I had done.

Lil’ J looked at Snoop and said “bad bad” shaking her arm towards him as if she was going to spank him.

I’m a horrible mother. I admitted.

We went back upstairs and I tried to clean up the mess as quickly as I could before we left and made sure both doors were shut tight. 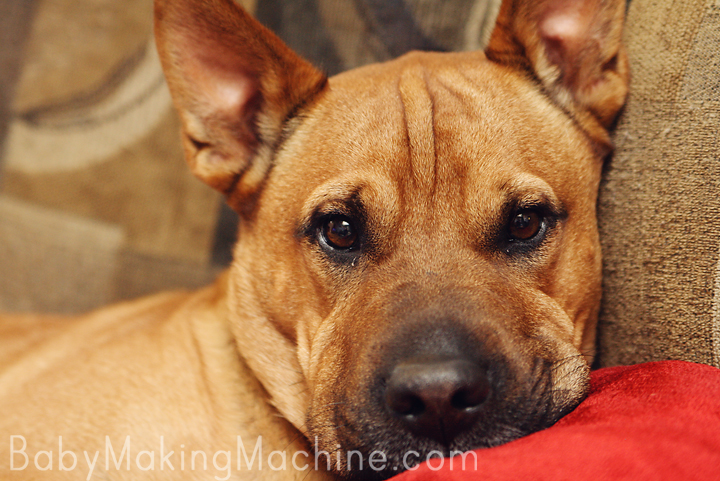 In my mind, over and over I saw my daughter calling our dog bad and her shaking her hand at him. I couldn’t believe she had picked up on that so quickly. I’ve been trying to teach her how to say please for weeks yet she learns how to reprimand our dog in seconds?

I made a vow that I will be more careful about what I say and do in front of my daughter. I don’t swear, and typically I feel like I’m careful about these things but this was an eye-opening experience.

I also decided Snoop needs a lot more loving than he’s gotten over the past year. I’m finally able to admit I’ve neglected him a bit since a baby came into the picture. Every day since my bad mom moment I have played with him more, done tricks with him, or taken him for a walk. I even taught Lil’ J how to brush him with our glove brush, so now when she sees it she’ll take it over to Snoop and brush him.

They are just baby steps, but in the right direction. I messed up bad. I guess the important thing is learning from my mistakes, right? I’m just sorry it had to come at Snoop’s expense.

Shame hun, I do feel exactly what you mean. Im on the other pregnant and the dog for somereason is just driving me nuts. he licks his mouth over and over which is annoying and for somereason I cant stand it so Im always chasing him out of the room. Now when he sees me entering the room he walks out.I feel horrible and im trying to tolerate this habit of his which his has just acquired. Hang in there.

As long as you didn’t do it to Lil J then no biggie.

You never realize some of your bad behavior until we see our little ones mimic us. Sorry for the tough lesson- it does suck learning that one. I’m raising 3 and I’m still realizing some of my less obvious but still poor behavior. Keep your chin up, we all have those moments. And you know He is proud of the job you are doing as a mother! =]

Ha ha jennie w. – yes, I agree with you! My parents had a dog when I was little, and I have bad memories of it. My parents still have a dog and when we visit with my 1 year old while she does love the dog between the hair, eye goo and other bodily functions my daughter tries to kiss all over the dog, put her hands in its mouth/eyes/ears and it completely grosses me out. My husband feels the same. To each her own, but for us baby poo/spit up/messes is one thing and we could never deal with the animal version of it. No pets for our family!

The dog will be just fine. You know those animals have the ability to be so be HUMBLE and loving no matter what. We all have our days and you are NOT a horrible mother. On the other hand it’s so easy to forget about them when we are little ones. My kids beg me for a dog..I don’t think I can handle more “responsibility” at this time 🙂

I have been there…..it sucks 🙁

The good thing is, dogs love us unconditionally and are completely forgiving! Children, while impressionable, are also forgiving. I am sure she will easily learn that that is not the proper way to interact with Snoop.

That’s the worst thing you’ve done thus far? Really? Never taken two cars to church and assumed the other parent had the child? Never set the baby on the sofa then let your husband sit right on her? Never had a screaming, swearing episode AT your child? Never spanked her?

Aww…you’re not a bad mom. J is so blessed to have a mommy like you. We all lose our tempers in front of our kids and instantly wish we could take those moments back when see our kids watching and even more so when they mimic the action. I don’t J will be scarred or anything and has probably already forgotten the incident.

Part of being a mom is learning. And in that process of learning, you’re going to make some mistakes. ~Hugs~

Don’t be so hard on yourself. You caught yourself….and you and Lil J will do better. I just know this to be true….

did the same thing. cat jumped on the table for the bazillionth time and i got so mad, i said, no! extremely loud and shoved him off the table, now when dustin sees the cat he screams “no!” and tries to push or hit him… its taken weeks to get him to give the cat a hug instead of a punch. kids are seriously like sponges. its rediculous.

Thank you for allowing me to learn a lesson as well. I have two cats and one of them is very bad and gets yelled at quite alot. I will think twice now what I say and do if my son is around.

However you are NOT a bad mom, just human.

Jen, you are being WAY too hard on yourself.

This cracked me up. One time i was flipping channels and it landed on a commercial of MOB WIVES! P saw it for two seconds and ohmygod he talking about the “punching people” for months. I am SO careful and 10 seconds of a crappy commercial and ugh. I feel you. Don’t be so hard on yourself. We have ALL been there :O)

Girlfriend, if this is the worst you’ve got…you’re doing one heck of a job. There once was a mom who let her infant daughter roll of the changing table onto the hardwood floor. Oh yeah, that was me. There. Feel better?

Ohh where do I start. Don’t worry too much, we all get those moments. I turn into that “aarrrrgg mom” most times I am in a wicked rush. Couple of those crying fits in my yelling state have now made me an “arrrgggg” yelling mom – which I do under my breath. Because I have had to stop and calm a screaming baby which in turn breaks my heart and sends me into “check mood” status.
In regards to pets, I have abandoned those furry babies long time. Yup. I am terribly worse.