From Princesses to Dinosaurs: This is What a Boy Can Teach His Mom

I sometimes feel like I’m reliving my childhood with Lil’ J. As I help her style her doll’s’ hair, or when she asks me to play dress up with her, I feel like I’m 7 all over again. Even as I see her enthusiasm for Disney movies grow, it brings me back to the joy I felt playing and watching movies with my sister all summer. It’s all fun, but has a twinge of deja vu. With my son, I’m experiencing a world I’ve never known. A reality that feels new and adventurous.

I never owned a train set. I don’t recall ever having any toy dinosaurs, or even knowing the difference between a steam engine, a freight train and a monorail. My son is proof that we are who we are no matter our parents influence. I may have some impact, but this kid who came from me and my husband (who also isn’t into Dinosaurs or trains) is finding his way and his love for world in ways I’ve never even tried. Not to mention his personality… That’s something new too.

Though we don’t share interests naturally, I’ve realized I love what my kids love. Or rather–I love seeing the look in their eyes when they’ve discovered something that ignites their passion.

I can trace my son’s love of dinosaurs back to the day I was trying to sneak and watch Jurassic World on TV. His sister was at school and he was distracted watching train videos on YouTube Kids. Or so I thought. Any time the suspenseful music picked up and or the sound of mauling filled the air he looked up, determined to see what was happening, even when I would try to fast forward or cover his eyes (yes, I realize I should have just given up and watched it later, I’m a bad mom, I get it). I’ve since found a few more age appropriate dinosaur videos he likes to watch.

After that he started to play with dinosaur toys at the babysitter’s house, and now even goes into nursery at church willingly because there are a couple of small dinosaur toys to play with. I knew I wanted to do something special involving this interest of his.

I love surprises. My husband is awesome because he knows this and surprises me with the littlest things like sparking cider on Bachelor Monday, or chocolate covered strawberries delivered on Valentine’s Day, or something I’m not expecting every Christmas. My love of surprises goes both ways though. I love surprising my husband but it’s really hard to do, so I default to surprising my kids. A lot!

I was telling a coworker about some of my spring break plans when he mentioned a dinosaur park in Texas with life-sized dinosaur statues. I knew this would be the perfect surprise for my dino-loving boy. 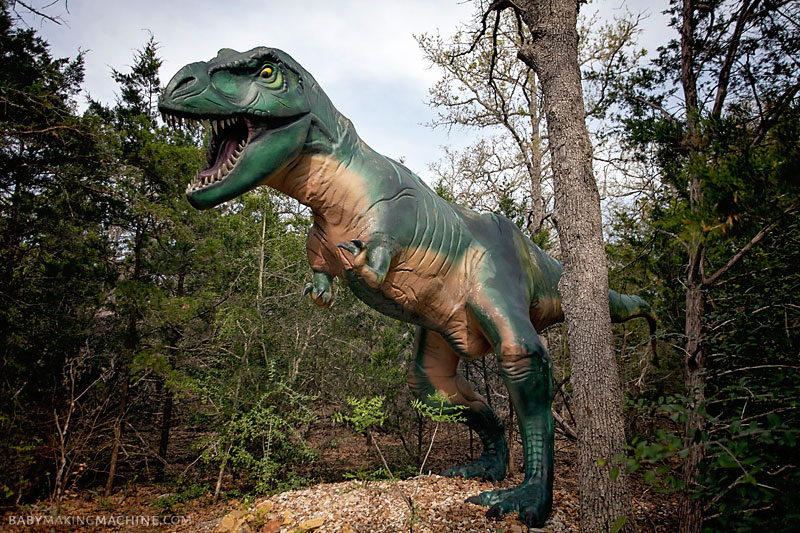 We planned our visit on a day my husband was off so he could also see the look on our son’s face when he realized where we were. I told Lil’ J and Aunt Kim to keep it a surprise as we drove out for a day trip to Cedar Creek.

“Don’t mention dinosaurs!” I told them.

As we turned into a parking lot Big T yelled from the back seat.

“I see a dinosaur!” He saw it before the rest of us. An unpainted statue behind a building. He couldn’t get out of his car seat fast enough. The moment we set foot in the entrance for admission, he went straight to the tiny dinosaur toys. He had no idea what he was in for.

We purchased our wristbands and stepped outside. To the right was our good friends waiting for us on the playground. To the left were two huge brontosaurus-looking statues. My daughter ran right, my son ran left. 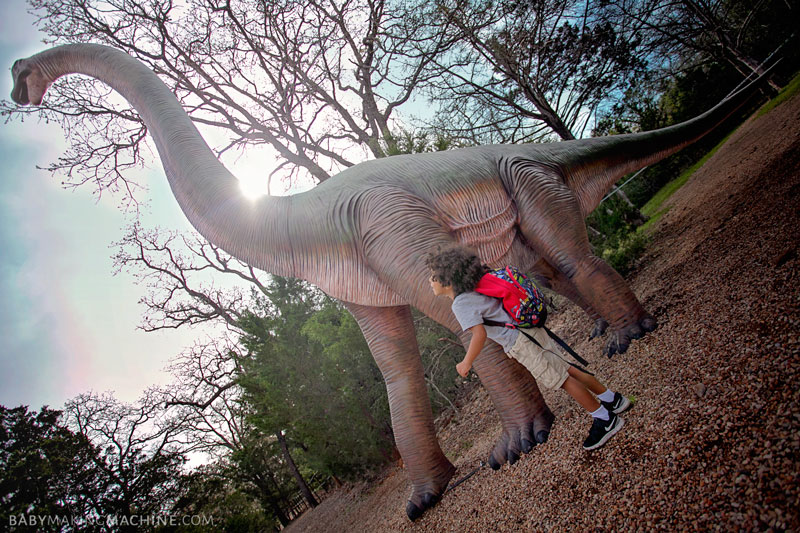 “Mommy and daddy dinosaur!” He bound to them and looked up in awe and wonder. I held back tears as my son gleamed up at the statues. This is his thing.

We walked through the park and saw all sorts of dinosaur replicas.

My daughter enjoyed herself too, but my son was in HEAVEN. 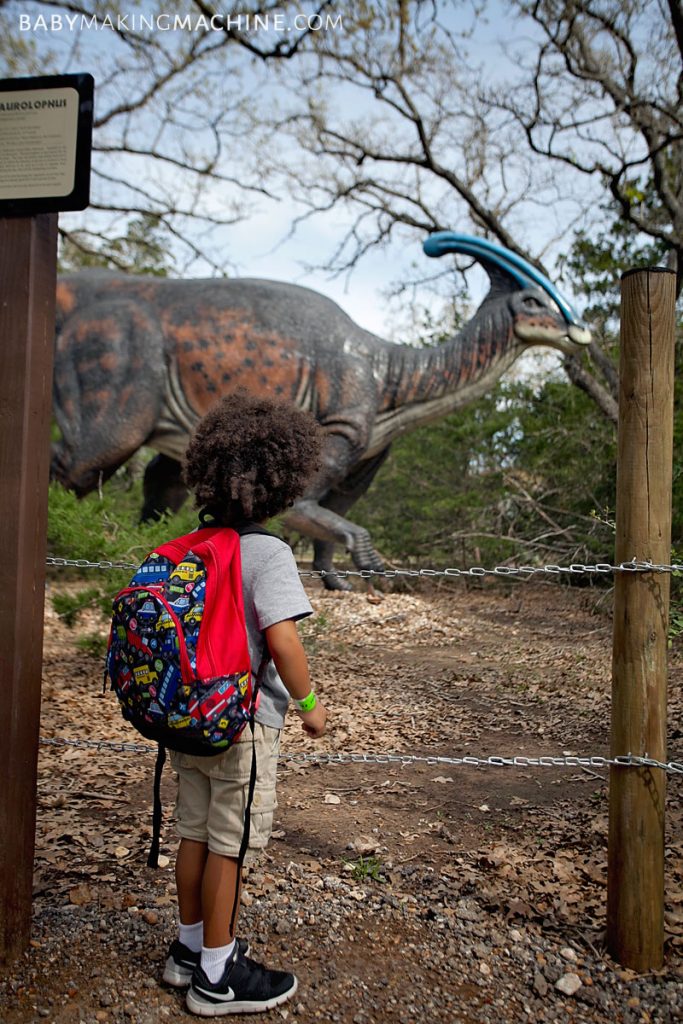 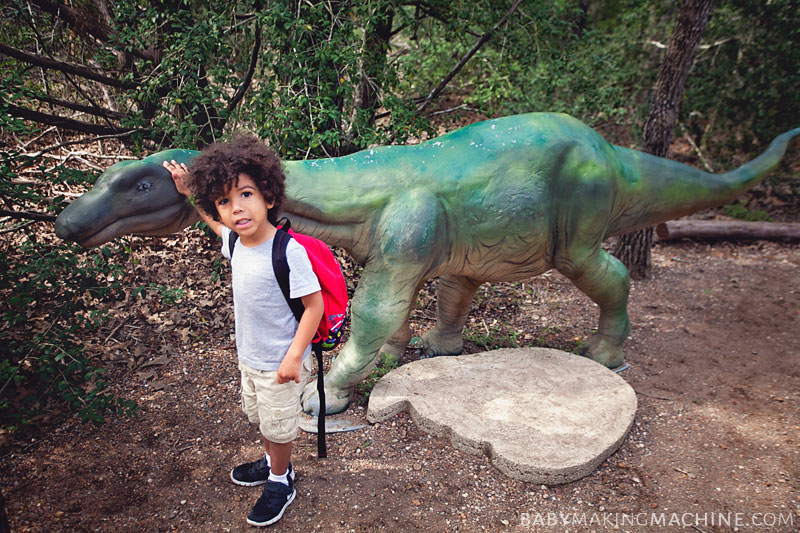 Sadly I don’t remember many of these dinosaurs by name besides the T-Rex, Triceratops, and Stegosaurus. I’m sure that will all change in time if my son continues to be interested in them. 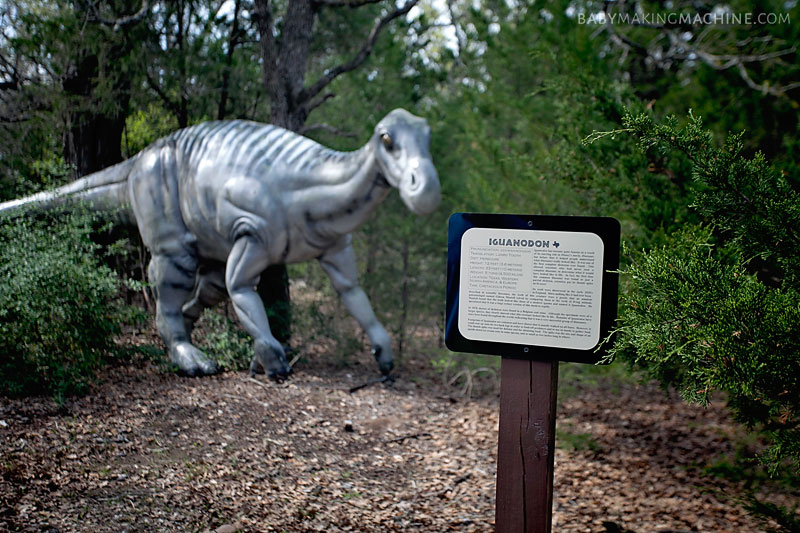 Then sooner or later, I’ll know more dinosaur names than Disney characters. Because that’s what true love is all about. 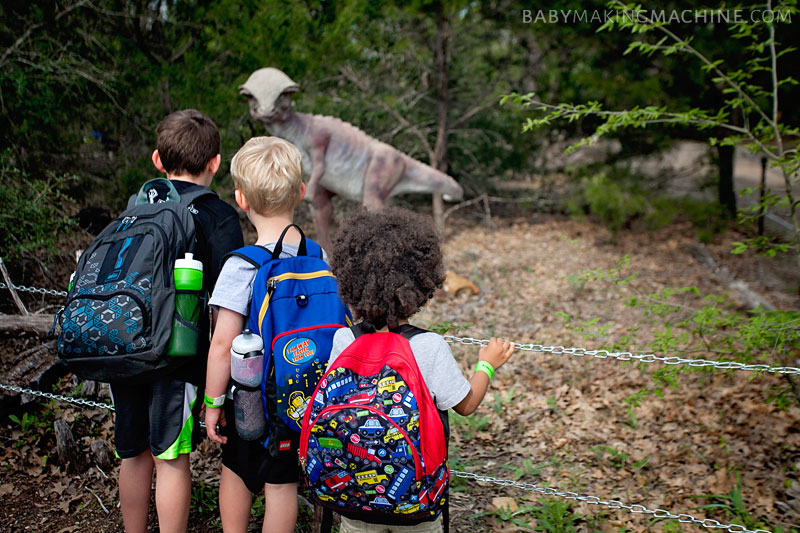 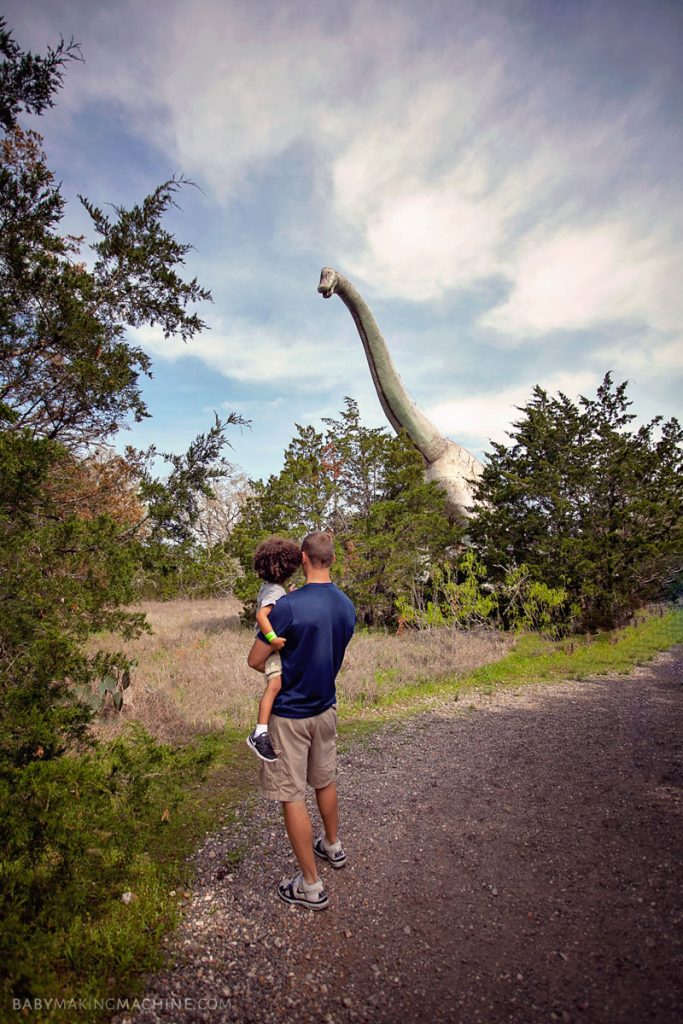 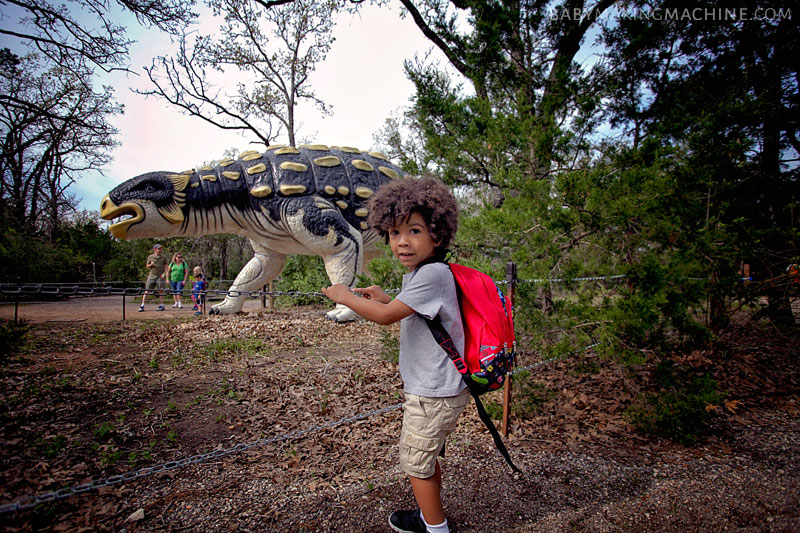 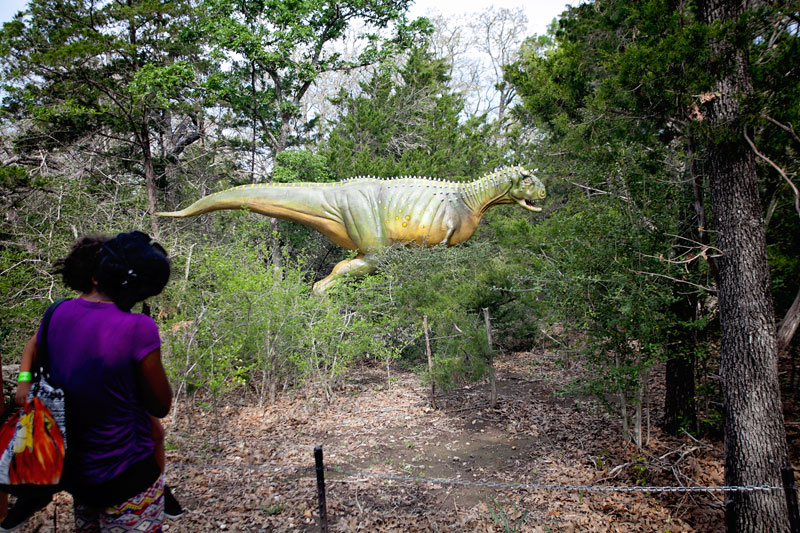 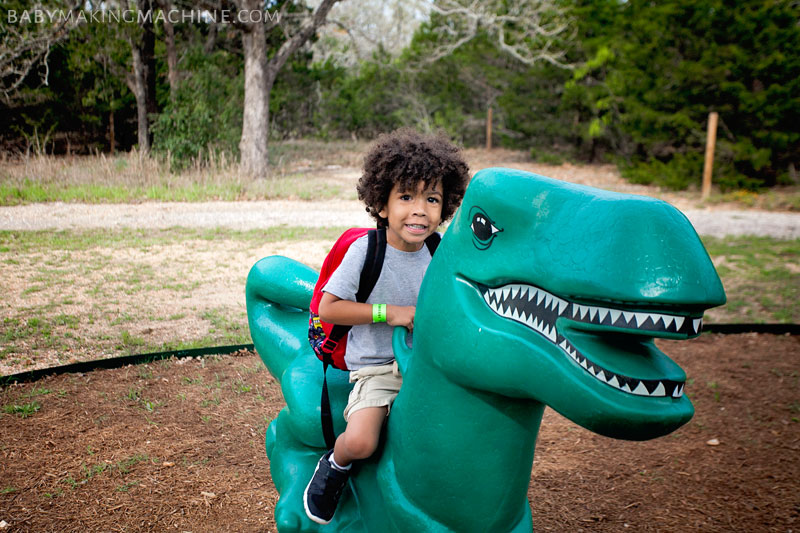 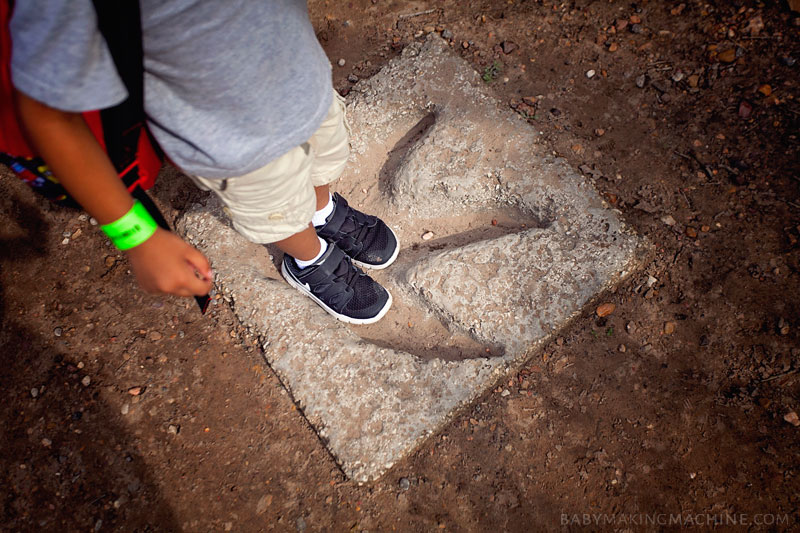 I’m glad Big T found something else to spark his interest! Have you ever watched Dinosaur Train on PBS? You’ll learn a lot about dinosaur names, facts, etc. It’s such a cute, animated show!

He’s FINALLY starting to like it Kenisha. He prefers “Real” dinosaurs to the cartoons, but he loves the opening song, and when they’re riding on the train. haha

Awesome! Its in fact amazing paragraph, I have got much clear idea regarding from
this paragraph.

If your son is still into dinos you should check out Dino Dan, and Dino Dan:Trek’s Adventures. They’re filmed in Toronto, a bit cheesy, but live action. My son loves these shows! (They’re on TVO in Canada, and can be found on YouTube!)