I blame my hatred for cleaning on my parents. I’m pretty sure from the moment I was old enough to hold a washcloth they put me to work. Laundry, sweeping, mopping, bathroom duty you name it. I felt like Cinderella. But instead of having evil stepsisters laughing at me, my sisters were alongside me doing a crappy job, which left more work for me and–Well, you get the idea. Anyway…

“They only had us so we can be their slaves and clean the house!”

My sister and I were pretty dramatic.

So basically I feel like I paid my dues from the age of 6-17, and for the next 10 years I’ve thought of ways to make cleaning less miserable. From marrying a recovering neat-freak, to hiring help, and researching cleaning robots.

The robot fascination started one day when I was working on a story about a robot that may eventually be able to detect early signs of autism in children. I had just finished interviewing the inventor about this really cool device when my photographer told me how he has a robot.

“It vacuums my floors,” he told me.

“Do you have a Roomba?!” I was excited to talk to someone who actually had one. I’ve been salivating over these things forever, and the reviews were great, but are they really all they’re chalked up to be?

“It’s awesome, we come home every day to freshly vacuumed floors.” SOLD! He had me at ‘It’s awesome.’ I proceeded to ask him a gazillion questions about it, and tell my husband I wanted one, but he said to wait until we moved, and we’d see. Our vacuum was on the fritz anyway, and we’re in the market for something new. I’ve heard great things about Dysons… Rolling around on a ball and all. People tell me you barely have to push them. But here’s the thing… When it comes to vacuuming all I want to push is a button.

I got something very similar to try out. It’s a Braava 380t, Roomba’s little cousin. It’s a robotic mop… Think of a Swiffer on wheels running around by itself. Ya, it’s pretty cool.

I named him Bob. And he’s basically my Prince Charming. I told you when I got him I’d give you my honest opinion and here it is… (Beware, the following photos are pretty nasty, yet exciting). 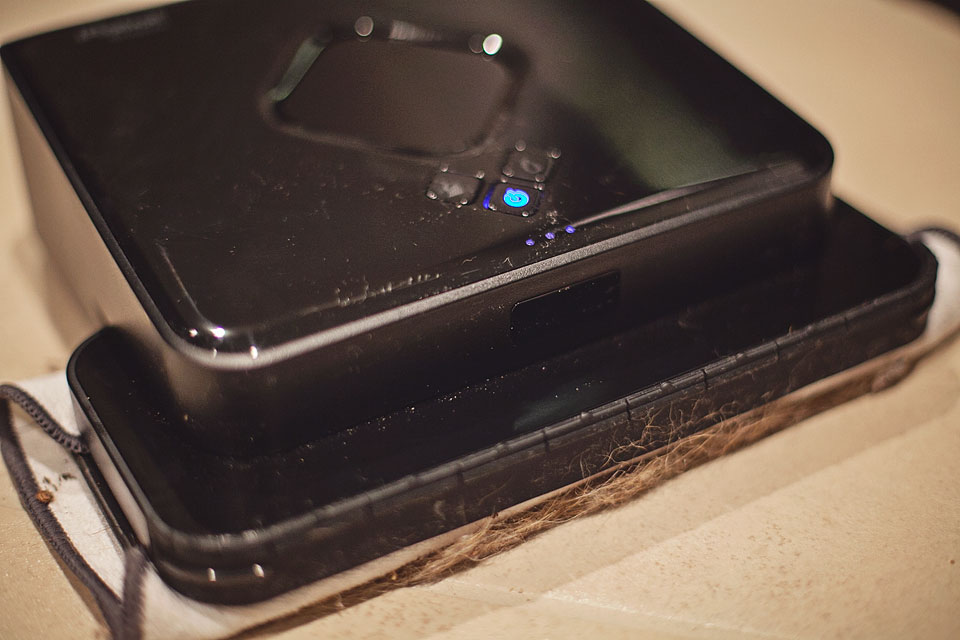 A good kind of gross.

We still have quite a few boxes everywhere but I tried it out anyway to see what it could do. Once Bob was done charging I set up the GPS cube in my kitchen and let him do his thing. My kids and dog were quite amused, as was I.

I didn’t think he would pick up much dirt cause we just moved in to brand new clean tile floors, but boy was I wrong. Bob picked up dog hair and dust like nobody’s business. We’d only been in a day!

I don’t dust, but now I can totally be one of those people who does. 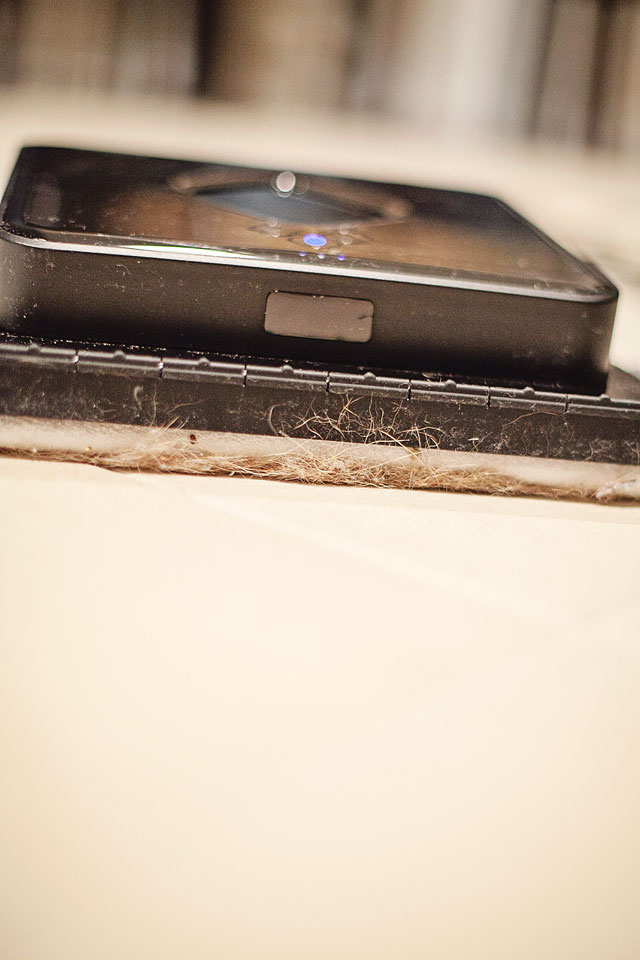 So Bob isn’t so good at picking up big things like pretzel chunks or rocks (hey, it happens). But anything a Swiffer can do, he can do better—Reaching under my couch and spots I’d never sweep myself. Perfect for routine cleaning and dusting that I’m usually too lazy to do. We made a mess moving into our laundry room, leaving a ton of debris. Bob sucked a lot of it up, but the solid concrete-like stuff didn’t stick to his cleaning cloth. Luckily I don’t see a lot of concret debris in my kitchen floor’s future.

A bonus is it’s also great kid entertainment just push the button, walk away, and my kids are entertained without me for the next 30 minutes or so. Poor Snoop was scared though. He’s no where to be seen in this video.

Here’s a very non-fancy blurry iphone video of him in action alongside my thoroughly amused children.

Just like you’d want to do a quick rinse before putting your dishes in the dishwasher, you’ll want to pick up big things off your floor before getting this thing going. You can use it in wet mop mode, or dry sweep mode, using either the reusable clothes it comes with, or disposable Swiffer cloths.

My absolute favorite part about Bob is the fact that once a day, he quietly takes care of Snoop’s dog hair on my tile. He has no problem running from room to room, aside from occasionally getting confused under one of my couches. But I just give him a little nudge after I hear his call for help and he gets going again. Snoop is getting a lot more love from me these days now that his hair isn’t a constant annoyance. 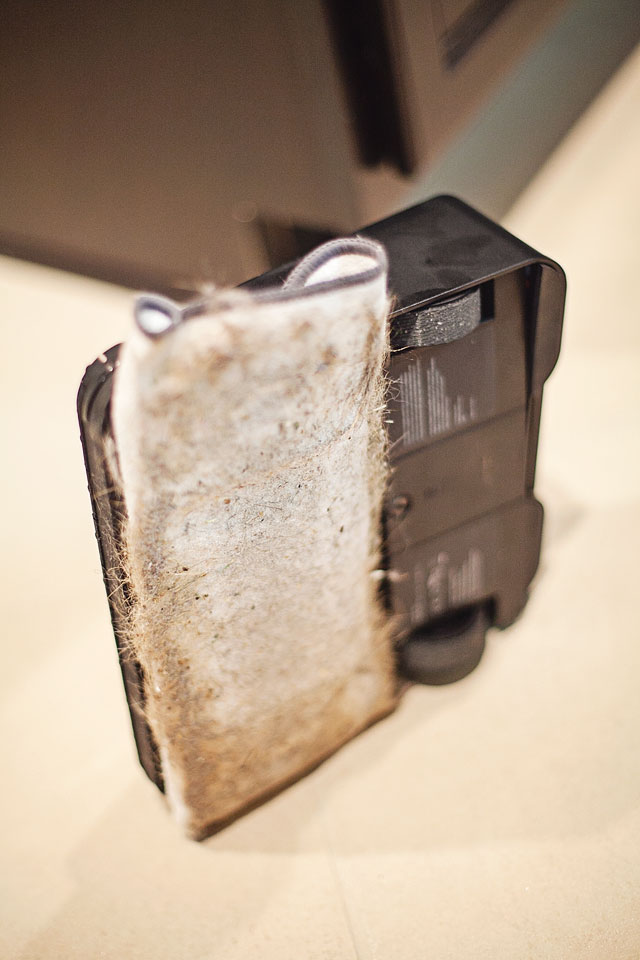 I’m ok staying on top of messy dry concrete and cereal spills and Bob can take care of the rest. Now my only question is do I still get the Roomba to vacuum my carpet and everything else? I’m thinking probably yes.

Moral of this story? Don’t get a dog. Or if you already have one, get a Bob, er, a Prince Charming… I mean a Braava.

Questions about my new BFF? Shoot!

And for more information about this little robot and others, check out iRobot. Technically, they sponsored the review, but my love for Bob is pure and priceless.

I need one that does it all! Like if Roomba and Bob had a baby – it could vacuum carpets and tile floors and mop…I am drooling over my keyboard just thinking about the idea of NOT having to clean my floors myself anymore…*sigh*

Can we also throw in one for the yard? Just a robot family zooming all around me cleaning everywhere I step. Sounds good to me!

Now I see why I SHOULD have been sweeping daily. Whoops.

I seriously need one of these in my life! It’s so awesome!!!

Oh yes I love it! Now I need one that can cook too lol

It’ѕ a shame уou don’t have a donate button!
I’d without a doubt donate to thіs excellent blog!
I guess foг now i’ll settle for book-maгking and adding your RSS
feed to my Google account. I loοk forward tо fresh
updates and will talk about ths blog with my Facebook group.
Chat soon!