I’d been on a plane to five or six different cities for four or five weeks.

It felt like I had slept in hotel beds more than my own. I was exhausted and stressed. But I was working and doing what I loved.

Looking back, I should have seen some of the signs. I was so tired I fell asleep at the gate and missed my flight home. I was having crazy dreams, and not sleeping well (normally I sleep like a rock). My skin was a nightmare. Acting up no matter how much water I drank or how many exfoliants I tried.

My period has had a mind of its own. Though I expected it sometime soon, on the IUD it could skip, be super light, heavy, or sometimes show up whenever. It was a few weeks late the month before, so I’d learned to travel prepared just in case. Actually, I had packed a couple pairs of Thinx underwear because I was in the process of reviewing the popular period panties (obviously that post is now postponed for a bit).

The final straw was when I woke up to sore boobs for the second day in the row.

Now let me say this wasn’t my first pregnancy scare. In the four and a half years I had my Mirena I can’t tell you how many times I’d ran out and bought a pregnancy test because maybe I’m that .00001 percent it fails for.

I’d check the strings and feel them, or sometimes I wouldn’t feel them for a couple days and I’d be certain I was pregnant. Only to find they were still there a couple days later. I’m just paranoid that way.

So I’d gotten used to buying a dollar store pregnancy test, getting a negative result, then going back along on my merry way.

I had a down day from video shoots in Memphis before flying to Detroit the next day. So I decided I’d take a stroll around downtown, grab some breakfast and maybe find a pharmacy so I could buy a pregnancy test.

I spotted a Family Dollar along my route and popped in to get a cheap test. It wasn’t a buck but it wasn’t First Response either. I figured it would do.

I grabbed a few snacks trying to camouflage my pregnancy test purchase because there are no self checkout lanes at Family Dollar… Why is that purchase so awkward?

Cashier: Hi how are you today?

Me: Fine, thank you. You’re judging me aren’t you?!

Back at the hotel I downed a bottle of water and peed on the stick. I set it aside and finished up before checking the results. As soon as I glanced over I saw two dark lines and uttered a single word. A word I haven’t ever written on my blog but I have a feeling you can guess what it was.

I started to panic and pace the hotel room. I couldn’t keep the secret inside but I also didn’t want anyone to know. No one except the person who was right smack in the middle of this situation with me.

It was still early and I was all confused about time zones but I texted my husband to call me. No response. Then I texted him again saying I was pregnant. 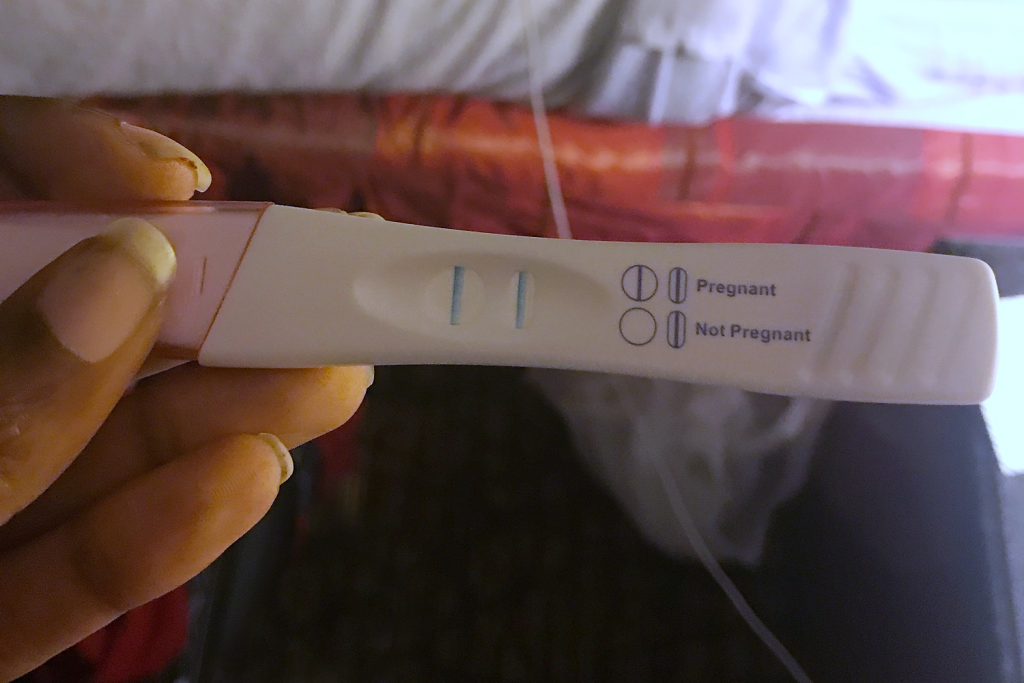 I know. Not the most glamorous way to break the news. But he called me right away.

There was a lot of “Are you playing a joke?” questions and “how in the world is this possible?” in between me continuing to freak out and burning a walkway into my hotel room carpet. He consoled me, told me everything would be ok. That this was actually pretty cool because he was sad our kids were getting bigger and maybe he took some of their toddlerness for granted, yada yada yada.

There were still moments of “Man, I was going to get a vasectomy next month!” and “Well, you’re not going to be traveling as much…” But overall he was significantly less freaked out about the whole thing. Positive even. He told me I should be excited but that emotion was the furthest from my heart.

Of course that made me feel even more horrible.

I wasn’t excited like I was with the other two. I felt embarrassed because it wasn’t planned. And stressed out about all of the things I had planned that would likely be shelved for a while.

What did this mean for my workload? Our homeschool routine? Our lives? My mind was spinning.

By my calculations the pregnancy was still early. I wasn’t months and months along. And anything could happen so I did my best to mentally press hold on the whole thing while I finished up the video shoots.

Before returning home my husband sent me a screenshot of the dangers of having an IUD in during pregnancy and asked that I set an appointment with my doctor immediately. I called and left a message and planned to have some blood work done once I got back to town and see if we could get the Mirana removed.

The following week was the worst week of my life.

Oh goodness. That’s a tough start! And that finish!!!!

Wow. You weren’t kidding about having a story to tell! Now post the rest already! Lol

Your story is so honest. Thank you for sharing. I have been down this road with the Mirena and finally took it out. Always guessing was driving me nuts. Congrats again on the new baby girl.

This cliffhanger is killing me!!

Wow!!! This leaves me wanting more! I know you were done when those two lines popped up!!!

Awww. I feel bad for you. My third was an “oh my goodness” and we were NOT prepared for her but of course we are figuring it out. I can’t wait to read the rest and as usual I’m loving your weekly photos!

A big virtual hug to you.
I’m really excited though…want to se this little baby 🙂

How exciting! I will bet you can’t wait. I am your newest follower. Come and check out our blog.

This is a very nice blog, keep posting. Wonderful article. Very helpful. Thanks for sharing. One of the greatest titles in the world is a parent, and one of the biggest blessings in the world is to have parents to call mom and dad. Are you planning for Newborn baby photography for your baby in Delhi, NCR and Gurgaon? My Baby 247 has a professional photographer that create cherished memories photo for you. For more information Visit Us! Infants photography in Mohali