So I got behind. I figured I’d better update this now cause before we know it I’ll be 40 weeks and ready to pop. … Ok maybe not that quickly, but it seems that way for some people.

So at week 11..
-I was still pretty tired
-feeling but not looking as fat
-still have my crazy cravings for potatoes 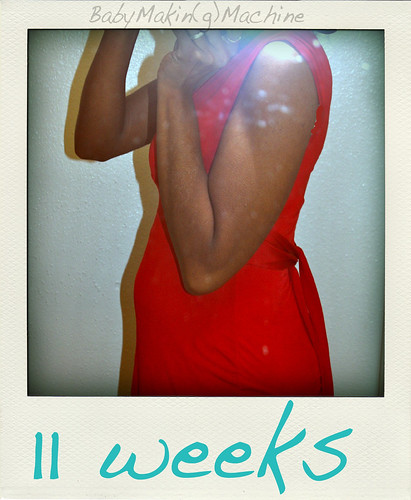 Spawnie:
-Tiny tooth buds are beginning to appear under Spawnie’s gums
-Some bones are beginning to harden.
-Spawnie is already busy kicking and stretching, but I won’t feel it for another month or two.
-Nor will I notice the hiccuping that may be happening now that Spawnie’s diaphragm is forming.

At 12 weeks..
Friday, I celebrated 12 weeks of pregnant in the bathroom hurling up my dinner. My mom said she was sick more during her second trimester so I was worried that was the beginning of mine. Thankfully I’ve felt good since that night.
-I’m not as tired lately and seem to be able to make it through the day without a nap.
-I’m eating more and craving more than just potatoes now.
-My six pack make a return today. I’m not sure where my belly went but I’m hoping it makes a return soon. So far my 9 week picture was the biggest so far. 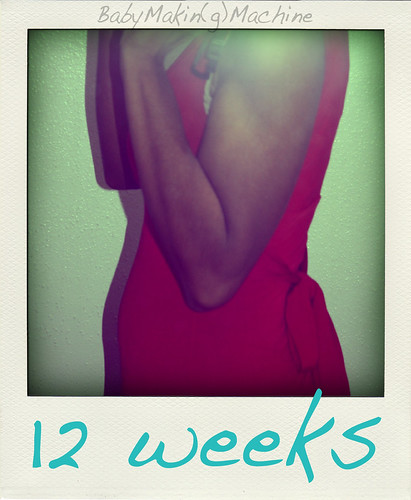 Spawnie:
-Fingers will soon begin to open and close, his/her toes will curl,
-Spawnie’s eye muscles will clench, and mouth will make sucking movements.
-Spawnie’s intestines are protruding out near the umbilical cord but will soon all end up in his/her stomach cavity.
-His/her face looks more human now, the eyes are in front, and ears are in place to the side… Thankfully my Spawnie won’t look like Alien Spawn forever.
-Spawnie is now about 2 inches long.

Babycenter also says if I prod my abdomen, Spawnie will squirm in response. We noticed this today at my OB appointment.

First off, when the doctor went to put the dopplar to my belly I lifted up my shirt above my belly button thinking it was up there but it was actually a lot lower and I couldn’t help but laugh at myself.

We were listening for Spawnie’s heartbeat and I got worried after a few moments when the doctor couldn’t find it. I was telling myself to remain calm but I just kept thinking of the scene on Marly and Me (sorry if you haven’t seen it)! She (my OB) was moving over to the left side of my belly when I heard a soft WOOSH WOOSH WOOSH… Really fast, and I recognized the sound cause I’d listened to it before on my friend’s blog.

I had my iPhone ready to record but Spawnie kept moving around and turning so we’d keep hearing WOOSH WOOSH CRSKSDK, and my said OB Spawnie was moving around and that’s what the noise was. I drank OJ before cause some people told me it gets the baby to move around, I wasn’t sure if we’d get an ultrasound and I wanted to see baby move it so, but guess that’s not the best idea for a dopplar check. I was too happy and excited to remember to take my phone out too, so no recording this time, but I’ll remember at my next appointment in 4 weeks.

Spawnie’s heart rate was strong and in the 160s, I think I heard her say 166. So… What do you think? Boy or girl? Don’t forget to vote in the poll at the top!

Also, one lesson I’ve learned is belly size can go up and down! I’m not sure when mine will stick around but I’m hoping it decides to show up and stick around awhile… Might as well.

Did your belly size go up and down? When did you notice it pop out for sure?

Also, I reached 5000 twitter followers to so celebrate I’m teaming with ModMomME to give away a custom key fob with your name on it. Just Tweet: “I would like to win this personalized keyfob http://bit.ly/84jmZr from @modmomME hosted by @FutureMama http://bit.ly/5fMrDu” 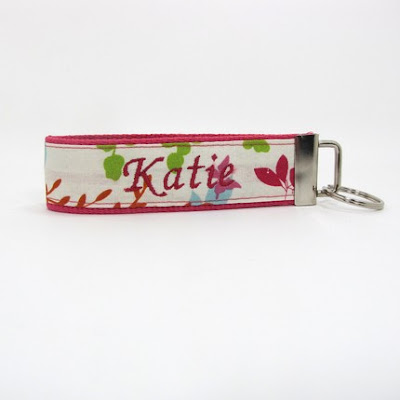 You have until Friday to enter, we’ll use Random.org to pick a tweet!

Also, I have TONS of pregnancy and fertility giveaways coming! Since my fatigue is leaving, I’m hoping to start up once a week again on Thursdays!

You’re going to have such a cute preggo belly!! 🙂 I noticed REALLY starting to pop out around week 18. Right when I had a beach trip booked to FL with my mom, haha.

So glad you got to hear the heartbeat! (thanks for the link) Our first time was the same way (they couldn’t find it right away). And I guess GIRL!

Your uterus actually won’t be belly button height until about 20 weeks. It’s so weird thinking your uterus is so small in the beginning and then how big it gets by the end.

You’re super cute, and congrats on getting to 12 weeks!!

For the first trimester you will have a fake me out stomach. Every night during my first trimester my stomach would blow up like a balloon, and the next morning it would be flat as a pancake. I’m six months this week, and trust me, this belly is not going anywhere. In fact, it seems like it’s growing daily. I took a VHS tape in to record my final ultrasound. He didn’t do as much as he did before, so I was mad because I won’t have another opportunity to get him on video. I recommend you recording each ultrasound.

I think you are showing a little more than your 7 week picture! You’re gonna have such a cute belly!

Look at that belly 🙂 I’m jealous. I didn’t get a preggo belly until 7 monthish. I am so looking forward to this giveaway 🙂

My belly did go up and down.. there would be times when I was like man I am huge and then the baby shifted or maybe I even went pee and lost some water down there and it wouldn’t be as big… but don’t worry before you know it your belly will not be able to hide at all and it will be hard to move and sleep and all sorts of fun 😉

Awww yay belly pics. I remember takin them each week too(for scrapbooking purposes) even tho it seemed like you could never tell. I didnt start to really show til about 22 weeks i’m a plus size barbie lol so it took a little longer including the kicking.

BTW such a cute giveaway

Well, I popped at different times at each pregnancy. With my first pregnancy, no one noticed I was pregnant until I hit about 20 weeks. I was still wearing my regular clothes and everything..Then BAM, there was my belly, and it steadily grew until I was pretty sure I was related to whales in some way. With my daugher, I started showing at about 12 weeks, and this last time, I was in maternity clothes by 8 weeks. I never noticed a change in my belly size at all.

I was a skinny before having my first baby so I was showing by 16 weeks.When I had baby number two and three, it a couple weeks later.But my growing boobs certainly made it obvious that I was pregnant.

My belly was surprisingly tiny until about month 6. Up until then, it just looked sort of bloated. Then 1 day I woke up and I had a full blown belly and it just got bigger, and bigger and bigger. And by the time I get to 8 months, I didn’t think it could get any bigger… BUT IT DID!

I love your belly pics! Wish I had done that while I was preggers!

I never saw Marley and Me but I did read the book while I was 7 months pregnant. BAAAAAD idea!

My husband found me sobbing uncontrollably in the bathroom the day I finished the book. I don’t want to spoil it for anyone but you know what happens at the end…

I am pretty sure when I was 7 months…someone FINALLY said–Look that lady is pregnant…but it all depends on what you wear! Keep wearing that cute little red dress and people are going to notice 🙂 I hope hope hope you don’t get sick for the whole 2nd trimester–then it’s big and uncomfortable right after that and NO break!

Yes, the belly shape changes quite often.. Moreso when you start popping REALLY WELL, because the baby sometimes likes to bunch up on one side or the other. Also, a word of advice: when you go in for your anatomy scan, if you’re wanting to get good pictures try and drink just a LITTLE OJ. I drank about 16 ounces and my baby would NOT STOP MOVING. We had to go back 4 weeks after so the doc could get a good, clear scan of her heart because she was so wiggly!! Congrats on hitting the 2nd trimester!! I hope that your barfing stops soon.

My belly didn’t really pop out until I was 5 months along. I was fairly skinny, so I expected it to be sooner! But alas, it waited a while. But once it pops out it is there to stay, and it will keep growing and growing!! I loved moving to the stage where people figured I was pregnant as opposed to just thinking I was gaining weight. lol

Awww, look at your cute little baby bump, how sweet.

HI! Visiting from SITS – Congrats to you on the babe! I’ll visit you again soon when I don’t have kids running a muck to add my 2 cents to some of your more recent posts…love talking babes and mamahood! 😉

oh, what a precious baby bump! i love it…and such a sweet time too!

You look awesome! It is amazing how the baby grows and develops!

You’re just as cute as a button. Reading these pregnancy blogs makes me SO excited to start teaching Bradley Method classes in January!

Love the little baby tummy. Getting enough rest? If not, I am available to lecture you.

won’t be belly button height until about 20 weeks. It’s so weird thinking your uterus is so small in the beginning and then how big it gets by the end.

You are so cute! Congratulations!