The Undeniable Power of a Child’s Imagination

“When do you use your imagination?” I asked my daughter this week.

It probably would be easier to say when she ISN’T using her imagination.

Without skipping a beast she replies, “The water balloons are fire bombs. And if I get hit by it that means I just got fire bombed. And if I catch it, that means I get to throw it back and if daddy misses it he gets burned.”

Intrigued by her response, I wanted to know more. 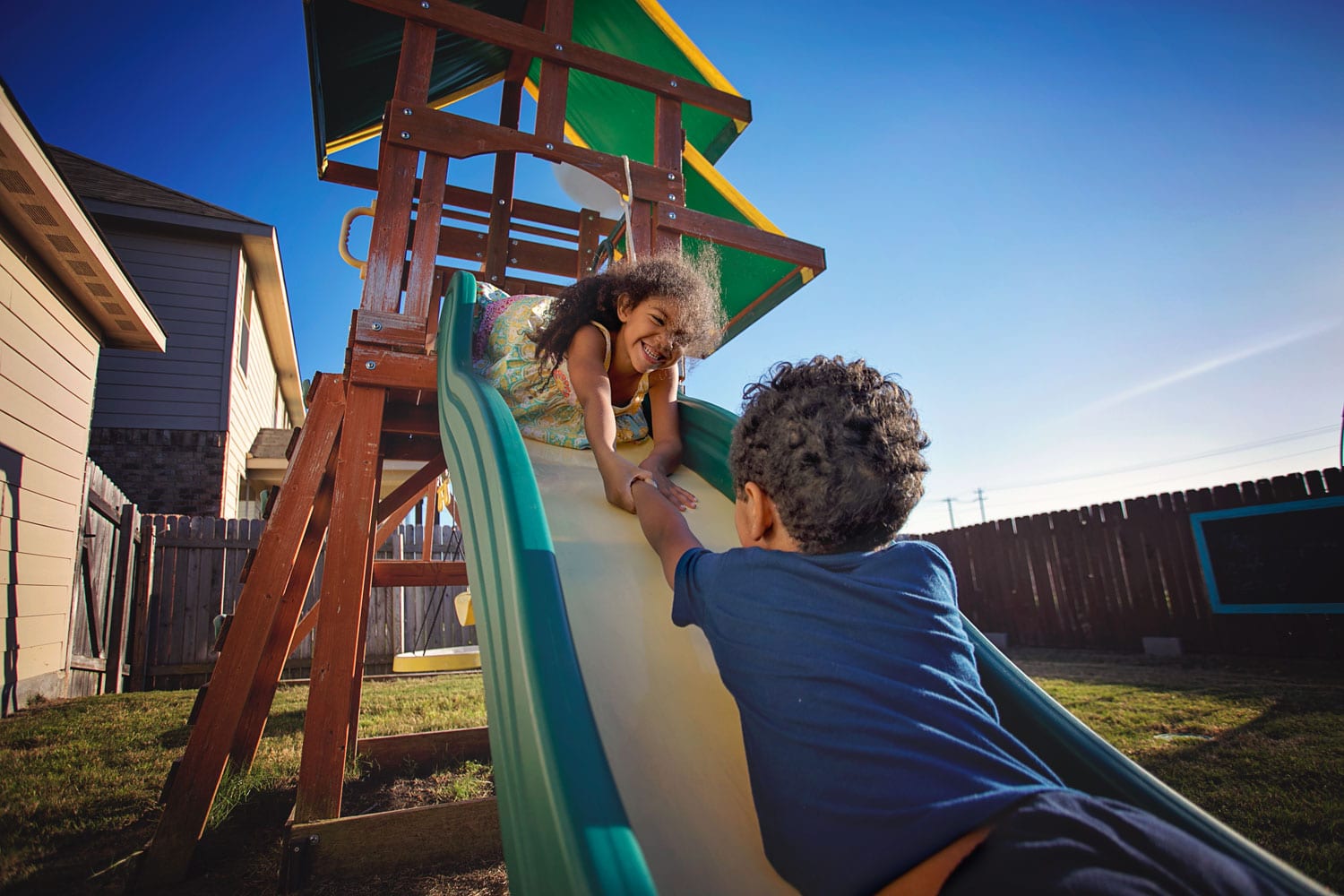 “What do you imagine when you’re riding a bike?” I ask.

“We pretend we’re a character from a movie, like Lightning McQueen or Chick or Francesco from Cars,” she said. “Or we pretend we’re dinosaurs and one is trying to chase the other.”

Now this is really something.

“What about when you’re swinging?

“When we’re swinging on the swing set we pretend we’re flying somewhere. Like to Utah or a football game, Australia.”

“What about in this picture? What were you doing?” 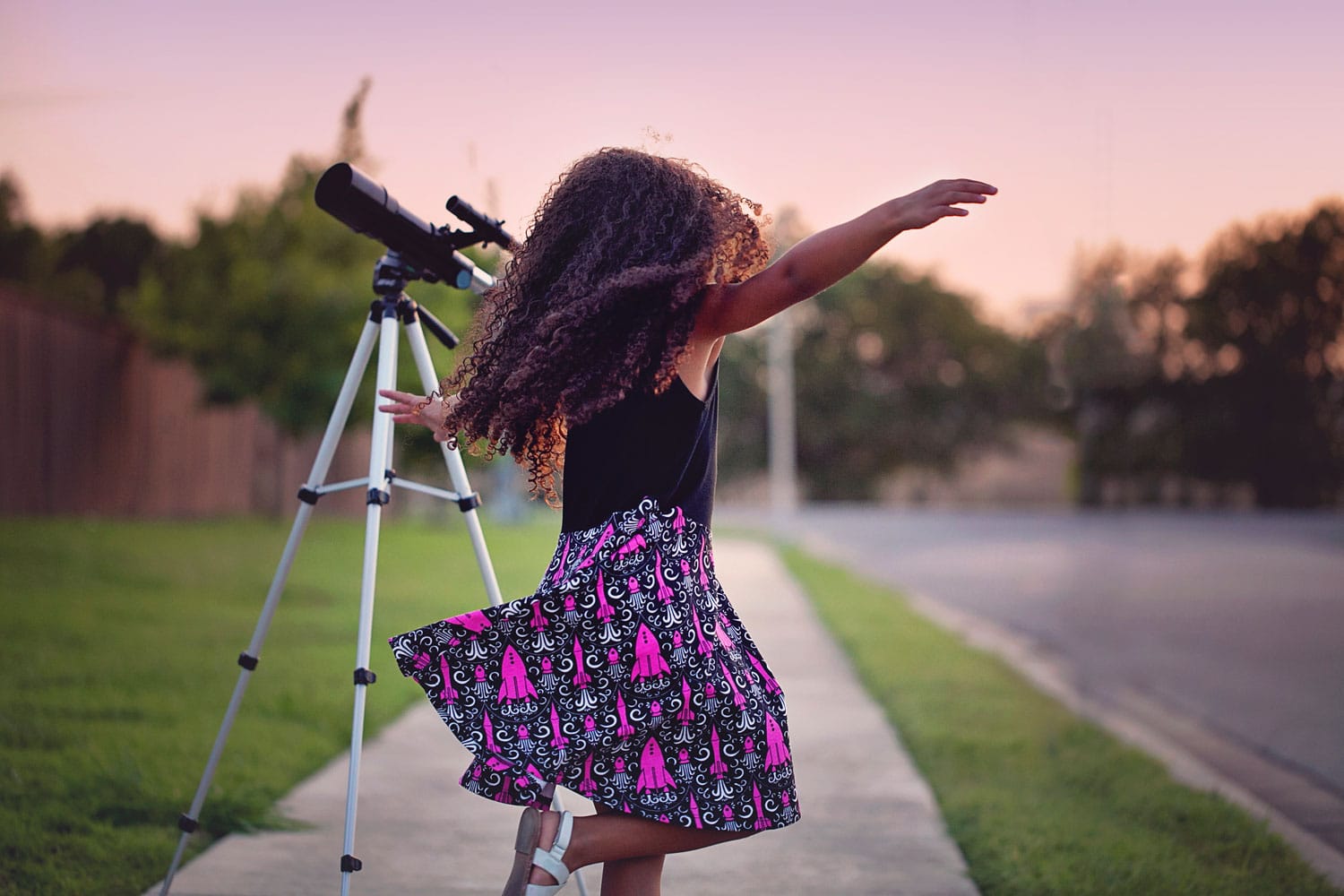 “I was imagining that I was on the moon jumping, seeing how the gravity is.”

“Do you ever just play or are you always imagining stuff?”

“I ALWAYS use my imagination.”

“Because one of the things I love to do is imagine because it’s fun and it makes games fun.”

“How could I use my imagination for that?” She asked.

“You could pretend to be Cinderella, ordered to clean a room.

She thought about this for a moment then decided that was a pretty good idea for completing her task. She asked me to help by acting like the Evil Stepmother giving a command.

I’ve always seen my daughter as a having an extremely wild imagination. This often leads to her sneaking into our room at night, fearful of the monsters or witches that may come into her room.

My son isn’t much different. Sometimes he pretends to be a vicious predator like his favorite dinosaur toys. Other times he’s meowing as he tries to curl on my lap like a little kitten. 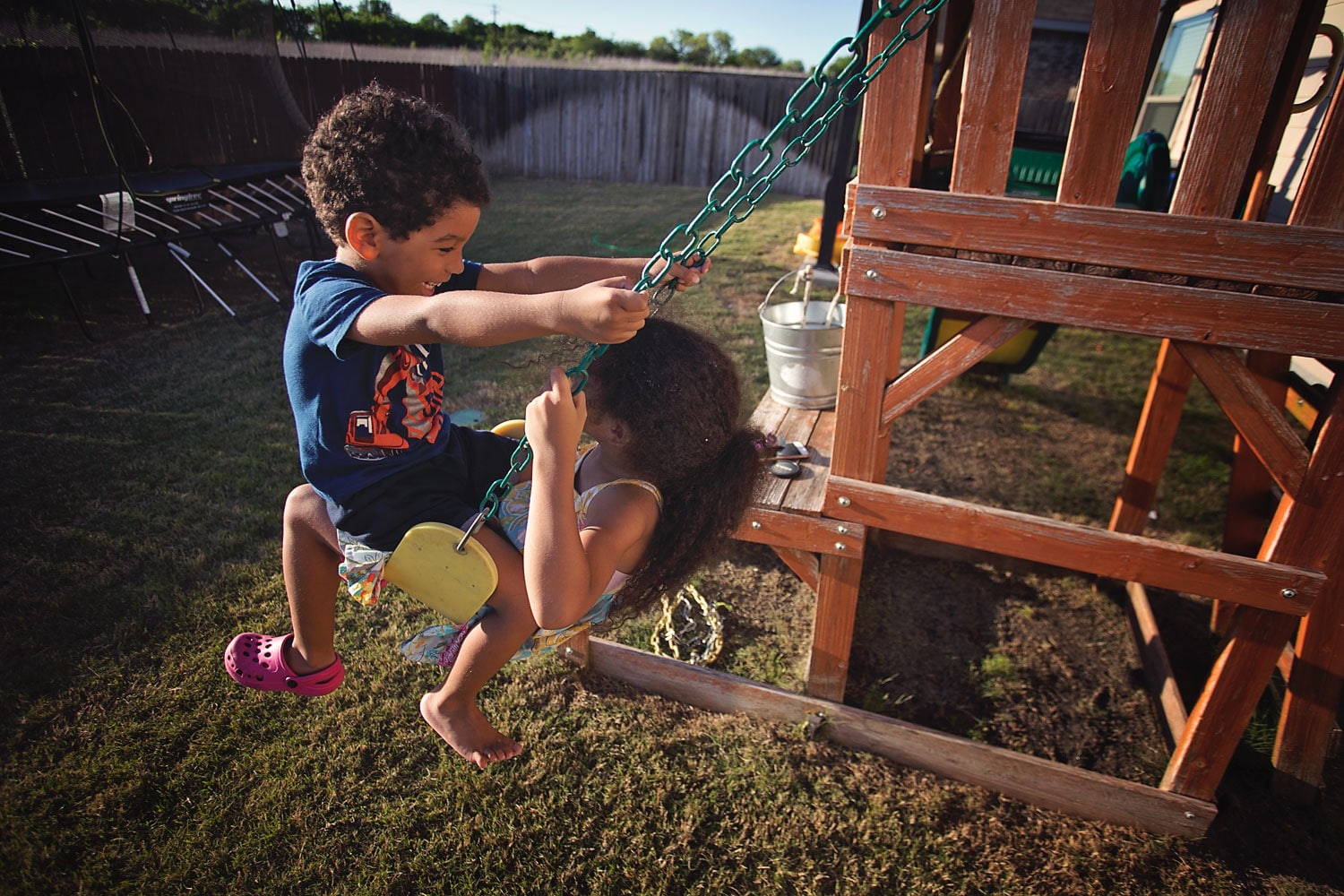 As a kid I played outside for hours, imagining scenarios from cops and robbers to lost princesses, to super heroes. Watching my children run around the neighborhood with their own little pretend scenarios takes me back to that age and stage where anyone could be anything.

They run from scene to scene only breaking for a quick sip of water, or to scarf down a snack. Sometimes even incorporating it into the game. A gluten-free CLIF Kid Z bar Protein, for example can become a long awaited meal after walking for days through a hot desert.

The last thing I want to do is stifle their dream world.

“Do you use your imagination mommy?” My daughter asked me. The question caught me off guard. I didn’t want to say no, but I was having a hard time thinking of an example. I told her sometimes I imagine I have secret super powers (this is actually a truthful, but very rare occurrence). I also sometimes imagine I’m racing an important clock when I’m trying to clean the house. My imagination also sometimes gets the best of me when I picture worst-case scenarios when we are hiking through a park.

“Do you think you’ll always use your imagination? Even when you’re a grownup?” I asked her.

I hope it always will be.

I’m passionate about getting my children outdoors to play, explore and stay active. That’s why I’ve partnered with CLIF for 2017, to share our adventures together as a family. CLIF Kid Zbar Protein bars have 5 grams of protein and are now gluten free! You can learn more about this product here. 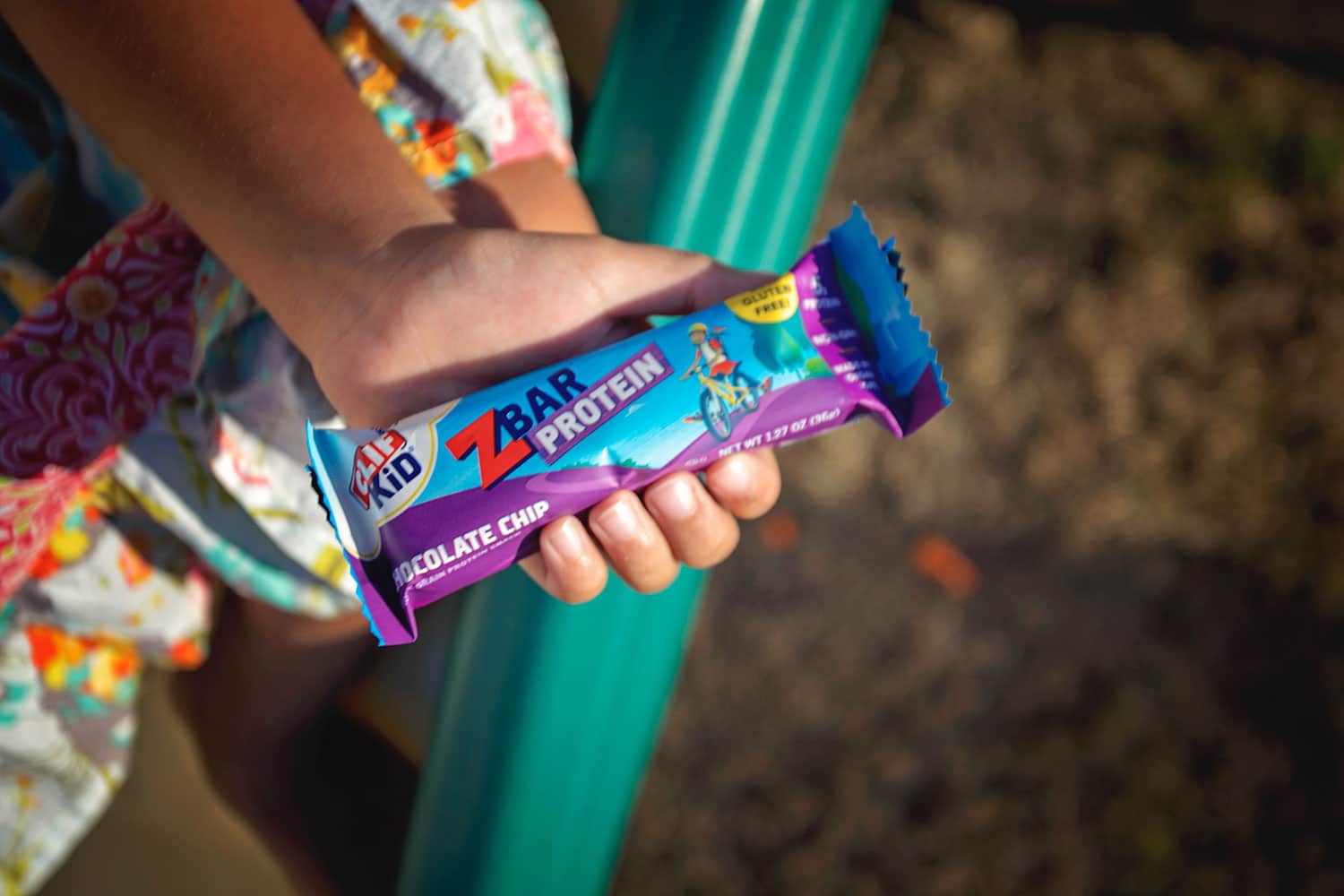 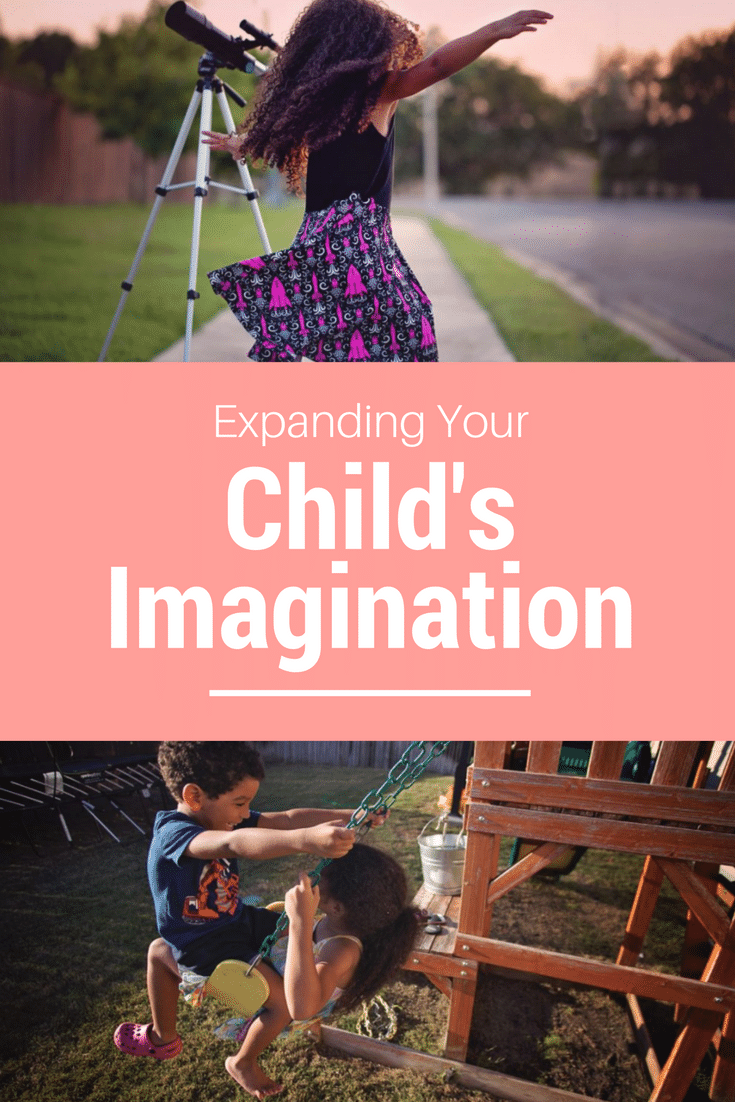 Some people think that visualization is ineffective for them if they don’t actually ‘see’ images in their minds. Most children are able to actually see images; however, even if they don’t, the process is still useful. If children (or adults) can remember events that have already happened, then they have the ability to visualize, creating something in their imaginations that is not happening in the here and now. It’s conjuring for the sheer purpose of making you feel good.

That’s really interesting Victoria! I didn’t know that. And it’s true, I guess thinking about the past or things that have happened is totally the same type of thing. I guess playing pretend is different.

I love to see kids using their imaginations. I still daydream as an adult. I can imagine myself doing and going places even when I am at home stuck.

Aww, it’s awesome that kids can come up with these scenarios! I love that they have such creative imaginations!

I love having protein bars for the kids and myself when we are on the run. Playing outdoors a lot my kids have come up with some crazy stories from their imagination.

Playing outside used to be the nest part of the days when we were younger. Not only were times like that memorable but they were so much fun and added exercise to our days as well.

Nothing warms my heart quite the way seeing my girls use their imaginations does. It brings them together in joint adventures only they can see. I’m going to have to try the Cinderella cleaning idea (lol!).

YES! I spent so much time outside as a kid. My mom would have my bike out during the summer before I even woke up! Kids these days are missing out. I also really like the cliff bars, too!

Your kiddos sound like mine. Always using their imaginations. I need to ask them these questions and see what they say.

This is so heartwarming. I love when kids use their imaginations and let them go wild!

What a beautiful reminder about not forgetting to use your imagination. I love her thoughts. Swinging to Australia sounds like a perfect plan.

In my opinion there is nothing better than a childs imagination. I often find myself listening to mine playing in their playroom listening at the crazy or amazing things their imagination comes up with.

Adorable post – you will love looking back on this down the road! Imaginations are the best…I used to make my stuffed animals fly around my room…pinky swear 🙂

She sounds so imaginative! Life would be a lot more fun if we all were able to hold onto a bit of that as we get older.

I love seeing the images of your family. They are so adorable. Creativity and imagination are two things that I place a lot of emphasis on for children and adults. However, if we don’t teach our kids to let their minds soar, as adults they will become completely hidebound.

I love the action pictures you take of you kids, you capture childhood perfectly! I think this point of prioritizing play and imagination with kids and agree with it completely! I like that my kids are simply kids, and adore the worlds they create when playing.

I love this post and I love that she can recount what she was imagining looking at a photo of herself. That’s so neat. I’ve two boys and I feel like I should be asking more what they are imagining…. there is so much insight there! I think as adults we use our imagination a lot but in the form of daydreaming how we’d like the house to look etc!