I can’t believe it but we’ve started potty training… Or something like that.

I guess Lil’ J was feeling left out every time I or her daddy used the bathroom so she wanted to start trying too.

I’d take her to use the potty when she’d wake up during the day, before baths and bedtime, and after nap time. Sure enough, those were some of the times she’s normally “gotta go” so it was easy to get all excited and cheer for her when she did her deed.

We’ve been at this a couple months now she’s not 100% out of diapers, and I’m feeling a bit responsible.

See, my smart little girl quickly realized that when she says she has to go “pee pee” or “poo poo” we will drop everything we’re doing (usually something she finds boring) and go on a very fun and entertaining run to the nearest bathroom. 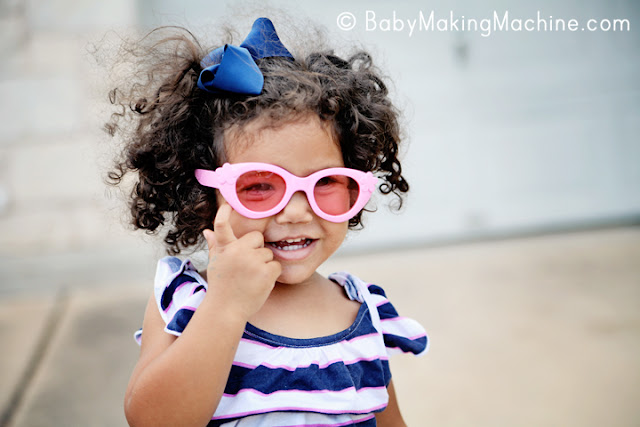 This is exactly what happened when we went to the local springs for some swimming. It happened three times. I jumped off our beach spot, and ran all the way around to the restrooms with a toddler swinging at my hip. …Mind you I despise public restrooms.

It’s gotten to the point where I’m purposely slow or distracting when she asks to go to the restroom when we’re out and about. I know I need to get over my phobia but I’m not sure how.

I’m not much better at home to be honest. If I’m curled up and comfortable on the couch she may stand up and ask to go to the potty and I gripe and groan, taking my sweet time to get her there.

Am I terrible or what?

I’m not gonna lie, I was excited for her to turn two and learn to potty train at school so I can skip the hard part. Some friends of ours said they had her daughter in “big girl panties” in a matter of weeks. “Just bring her underwear, we’ll take care of it,” they told her. And they did.

Just a few more months until she moves up to that class, after summer break. Until then, I think I’ll get her a step stool. She’s started to attempt to climb up and take her diaper off herself. As a matter of fact, the other day she kicked me out of the bathroom and told me to “No Mommy! Go watch Elmo!” Just like I tell her when I’m busy using the restroom, making something to eat, what have you.

That pretty much broke my heart. Just goes to show I need to watch what I say.
I’m hoping not to go all crazy about the potty training and let it happen as she feels like learning, which seems like now. I just wish she’d stop faking me out because mama doesn’t like the little boy who cries wolf.

Yet, I guess for now I’ll just hafta play along until we are both fully trained.

I forget which book I read (Potty Training in a Day?) but they made the point that you want to train your child to use the restroom, not you to take them to the restroom. While out and about it’ll be different, she is able to use the bathroom on her own at home if you give her the tools and training she needs.

I even taught my daughter to empty her own little potty into the big potty and I’d go rinse/clean it out regularly (right away when she pooped).

Even if you’re not looking to train her in a day, the book is still a good read for advice and tips. Quick and easy, too. It’s called Toilet Training in Less Than a Day.

*Note: Obviously, if SHE is ready to learn to do it on her own, she can. Some kids have to wait until they’re older. You know best. 🙂

Also, in the beginning, the little potty would be in the room we were in, but that didn’t last long because I wanted Lynne to get used to going into the bathroom. But she could open doors then and wouldn’t get into things in the bathroom while in there on her own.

I didn’t “potty train” my kids. When they were ready, they started going to the bathroom themselves. It happened at age 2 with #1 and even earlier with my second because she didn’t like diapers. My kids love to find the restrooms everywhere we go and then act like they are going to pee on themselves. I have to keep reminding them that public places are super dirty and not a fun adventure.

It happens quickly. When they are ready…game on! Good luck with the public restrooms. I am a freak too. I tell her, as soon as we walk in, “DON’T TOUCH ANYTHING!!!! CLASP YOUR HANDS TOGETHER!” Then I cover the seat. Pick her up, put her on it. Grab the toilet paper for her. Wipe her. Pick her up off it. Pull up her pants. All while saying, “DON’T TOUCH ANYTHING!” Pick her up, wash our hands….and then yell again…you guessed it! 🙂 Girlfriend is almost FIVE!!! lol.

We kept the potty in the same room with us when we started training. And I kept her naked butt. If she had a diaper or panties on she would have accidents,so for a week she wore nothing but long ish (Enough to cover her bum)dresses. Once she got better with the potty I moved it closer and closer to the bathroom until it was in there and did just fine.
Good luck to you!

Good luck! We aren’t ready for the potty training yet. Hope it goes smoothly!

For out and about, we got one of those potty rings (decorated with Cars 2 characters) and fit it into a backpack. We take it with us EVERYWHERE, along with extra pants and undies. Makes going potty when you’re in public way easy, and he’s always excited to sit on his Cars potty seat. And just remember, your keyboard at work is more germy than any public restroom 😉 At least you wash hands after potty!

Souns like my little guy who will be two next month, I also cringe whenever I have to take one of mine to a public bathroom I try to avoid them at all costs

It’s good she’s showing interest. I think that if you keep encouraging her and have patience progress will come. As for public restrooms, they make travel potty seats that fold up and fit in your purse.

That might be a good investment. I also keep a mini bottle of Lysol and hand sanitizer handy.