I’ve been in denial long enough. My son is turning ONE. I feel like I just had him a few months ago, not 11 months ago. It seems like he just started crawling, and now he’s trying to walk. I just snapped a picture of his first tooth, and now he has eight. Time has flown by much too fast, and it’s time I accept it.

Big T is probably my last baby. And I LOVE babies. Have I mentioned that? This stage he’s in right now… The happy, non-moody; Crawling, not running; Compliant, non-picky-eating; Babbly, not talking my ear off and constantly asking “why?” stage. He is so much fun and I just never want this to end.

Since this will probably be the last first birthday party I throw, I’ve decided to plan ahead and try to put together something I’ll be proud of. That’s right. Me. He won’t remember any of this. But I will. I’ve decided to do party theme based on the Dr. Seuss book “Oh the Places You’ll Go.” I love that book, and it has such a great message for both my kids, especially for my son on his first birthday. 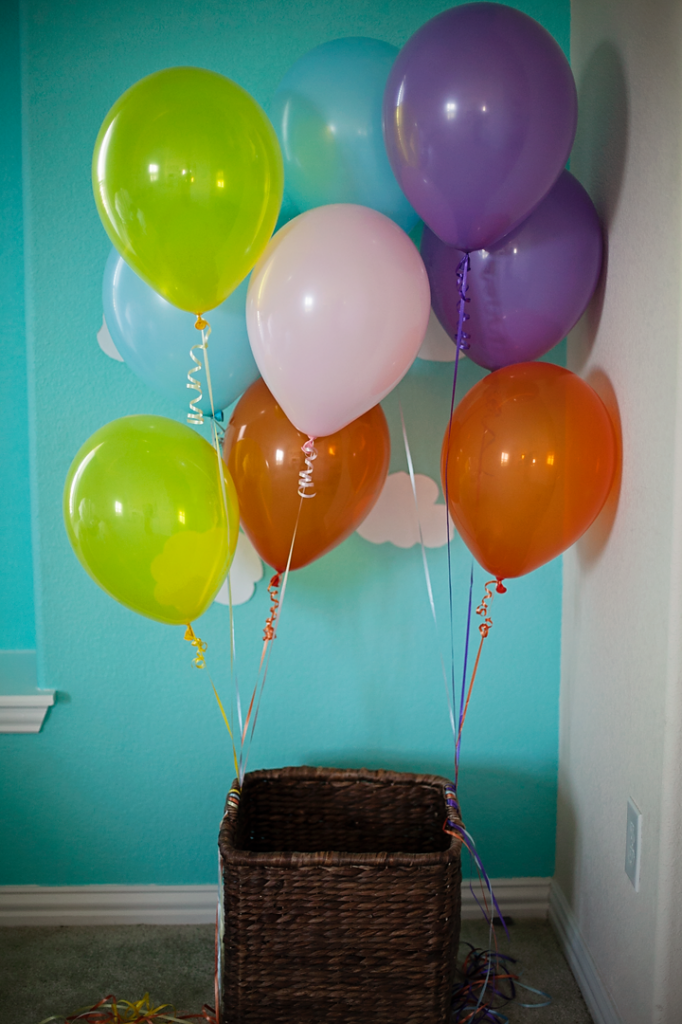 I don’t have everything set in stone yet, but I know we’re having it at my place, and that I want to have a little photobooth. My bright blue wall will come in handy as a sky backdrop. I bought a basket off craigslist for $5 that works as a perfect little kid hot air balloon basket. I tested out the area yesterday photographing pictures for his birthday card. Choosing a favorite was much harder than it should have been. 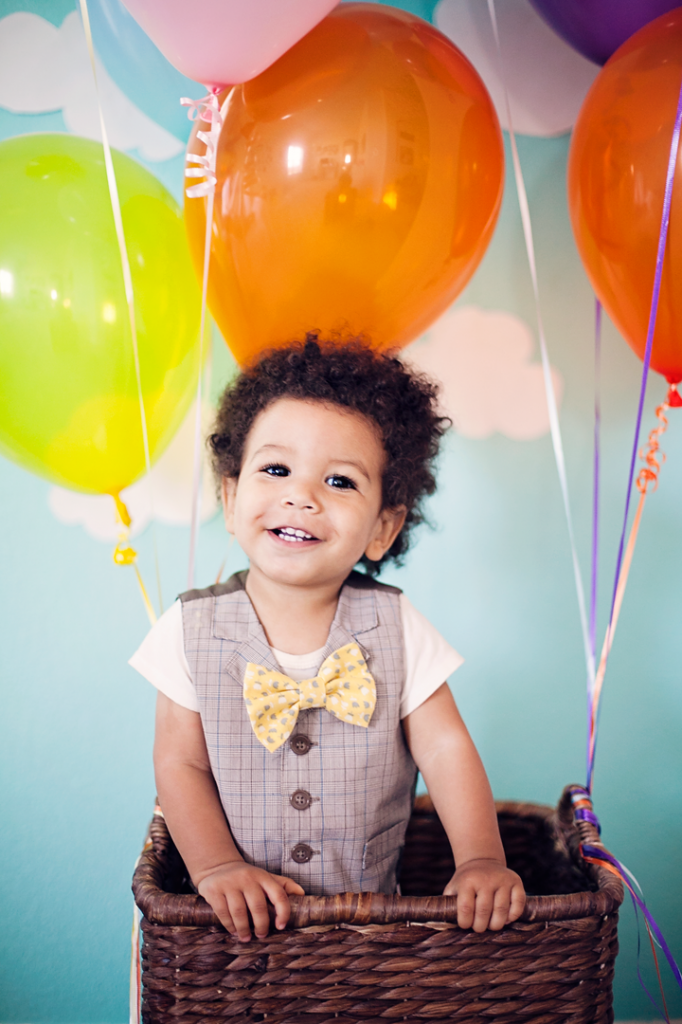 I’ve decided I’ll use extra photographs and outtakes as decorations for his party.

I’m also pinning other party ideas like crazy… A tiny ball pit/pool area, maybe a popup tunnel, and lots and lots of snacks. I love the cute pastel rainbow theme and colors of the book, and luckily Easter candies and decorations use the same kind of colors, so hopefully finding party items won’t be too hard. 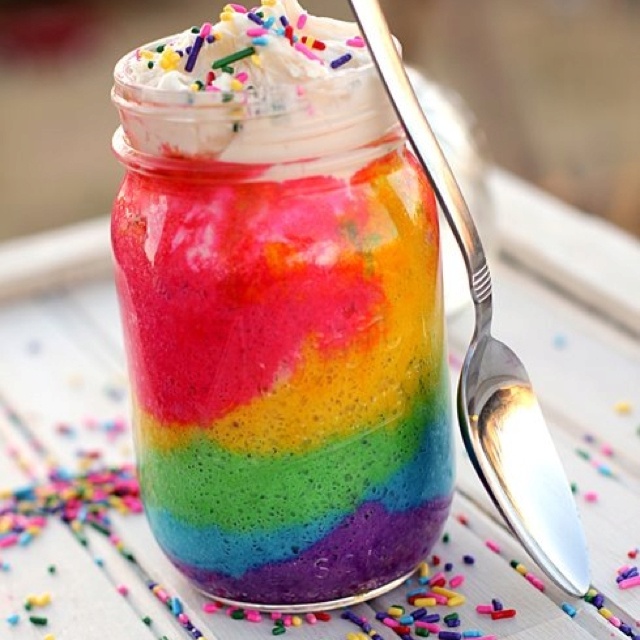 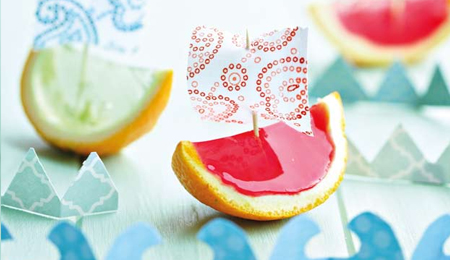 I’d also like to tackle at least one Pinteresty food project. I’m thinking either these jello boats, which look awesome, or this rainbow cake in baby food jars. I’ve been saving baby food jars just in case, but I’m thinking of filling them with cotton candy or Hersey’s kisses as a party favor instead. Only because cupcakes and other finger foods won’t require forks, and I’m wondering if adults will find them small. Then again, cupcakes are small too so never mind.

Other ideas on the menu: Pigs in a blanket, fruit kabobs, chocolate covered pretzels, popcorn, marshmallow pops,  goldfish. Basically a lot of sweets and junk food.

Aside from decorations and food, I’m chewing on an idea for a time-capsule like project for his birthday. Maybe a tradition I start for him. Perhaps I’ll have party guests give him a piece of advice on video, or mention a memory from the year 2013, or both. I’m workin’ on that.

If you’ve had party successes with decor, food, entertainment, whatever, please share! I want this to be a non-fail.

Having everyone sign a copy of “Oh the Places You’ll Go” with messages for the future would be cute. I love the photo booth. So cute!

I’m working on my daughter’s 2nd birthday right now. I’m doing a flamingo party and I’ve got everything made. I haven’t thought much about food though.

Love love LOVE this idea! I bought an extra copy of the book so we can do this. Thank you!

I like the idea above! Signing copies of the book would be a great takeaway. Also the pigs in the blanket would be cute. Can’t wait to see photos.

Pigs in a blanket are my specialty.

I just had my daughter’s 1st birthday party last weekend! We went with Happy 1st Birthday Princess theme.
Using photos for decorations is a great idea! That’s what I did –
Instead of doing the usual photo collage or name banner, I used photos of her from all 12 months of her life so people could see all around the room how different she looked each month. Along with a big banner that was made with photos of her.
The kids loved the balloon animals and swords that the clowns made (so if you know anyone that make animal balloons, it was a big hit)
Oh also have a play list of music that your son likes but then mix in some adult tunes like Happy (by Pharrell). Also having some adult music for the clean up crew helped a ton! 🙂
If I were a SAHM I would have made cookies in the shape of a 1 (the bakery wanted to charge me $4 ea cookie!)
Having helpers and doing things in advance will keep you from getting stressed. Also keeping it small (if possible) helps – we had about 50 people!

How awesome! Love these ideas, thanks! Now to see if I have any friends who moonlight as balloon animal-makers. haha.

Just celebrated #8 for my baby girl. It wasn’t a show stopper or pintress worthy but one thing that was a hit with the adults was meatball burgers. You can find tons of recipes online, I did take one tip and used hotdog buns cut into 3rds for buns.
I know you’ll do great can’t wait to see pictures.

That sounds delicious! Adding it to the menu, thanks!

I love the time capsule idea! Also a photo set-up area is awesome. I had the guests take pictures with the little one so he can see who was there at his celebration.

Oh I like this idea too! Make him pose for tons of photos! haha. Or maybe we’ll do a big group shot. Thanks!

I LOVE it! It definitely sounds like you’re on the right path and I’m sure it’ll turn out GREAT!! I know what you mean about “Pinterest-worthy” and it’s kind of a lot of pressure, huh?? 1st Birthdays can be tough…last year I struggled with “menu” for that age group…lost of cute stuff you can do, but not necessarily edible or “good” for that age! So I suggest keeping it simple, incorporate the colors and the photo booth is sure to be a hit, make sure you have lots of props!!

So much pressure! haha. Of course in my mind I’m imagining this awesome display but I know it’ll be a far cry from that. Oh well, we’re having fun. Yes, the menu is a challenge. I may have a bowl of organic puffs for babies, but there will be fruit and whatnot one unhealthy sugary meal won’t kill anyone. 😉

You are WELL on your way to a non-fail!! I love the idea of having everyone sign a copy of the book. Maybe they could leave a little piece of advice inside. Can’t wait to see the pictures from the actual party!! I love party planning, it’s so fun!

You are so sweet, thanks! Love the advice idea! Together we are going to make this party a hit!

It feels like you just had him. I can’t believe he is almost 1. My daughter will be 3 in April.

I can’t believe it either. Time flies! *cries*

I remember reading that you were in labor while I was up in the middle of the night nursing my then newborn son. He turned one a month ago and I am in denial as well! Of course, he’s got hardly any hair so he still looks like a baby, but his eight teeth say otherwise 🙂

We kept his party very simple, but I did focus more on his cake, which was one of those giant cupcakes. I hopped on Pinterest after I bought the mold and found a couple cool ideas–namely doing a mini-pennant banner spelling out his name across the top of the cake (held up by straws) and using candy melts to make a shell for the bottom of the cupcake, making it look much more finished than frosting it or leaving it bare. I’m no cake pro, but it turned out pretty stinkin’ awesome so I was happy.

It’s gonna be awesome. I love that photo area you created.

The one thing I usually do with Pinterest and create things I know I can do. I know that sounds like a no-brainer, but I try to be realistic. I also try to give myself plenty of time. Maybe tackle the jello boats a day before and the cakes as well. That way day of you’re not scrambling.

Wish I was there to help! XO

Great tips as usual! I’m pretty sure I’ve changed my mind about the jello boats. I’m not sure I can make hello much less perfectly-shaped jello.

It is the best time to make some plans for the long run and it is
time to be happy. I have read this publish and if I may I desire to
suggest you some interesting things or suggestions. Maybe you could write next articles regarding this article.
I want to learn even more things approximately it!